A sort of mashup of DON’T BREATHE and GET OUT, MONSTER PARTY has enough unique character beats and creative nastiness to rise above a feeling of mere pastiche, and stake out its own identity as a class-conscious carnage-fest.

At the outset, writer/director Chris von Hoffmann does a swift job of getting us on the side of three protagonists who are, essentially, common criminals. Young burglars Casper (Sam Strike), Iris (the new HALLOWEEN’s Virginia Gardner, who gave us a few words on PARTY here) and Dodge (Brandon Michael Hall) tend to target the houses of upper-class jerks, and all three have specific personal reasons for needing the money. Iris and Dodge are expecting a child, and Casper’s dad is deep in gambling hock to some extremely unpleasant thugs (who hang out at a strip club, occasioning a bit of gratuitous boobage). Needing six figures quick, Casper is convinced by his two pals that they can raid the safe of a posh mansion where Iris will be helping cater a party thrown by überwealthy Patrick and Roxanne Dawson (Julian McMahon and Robin Tunney). 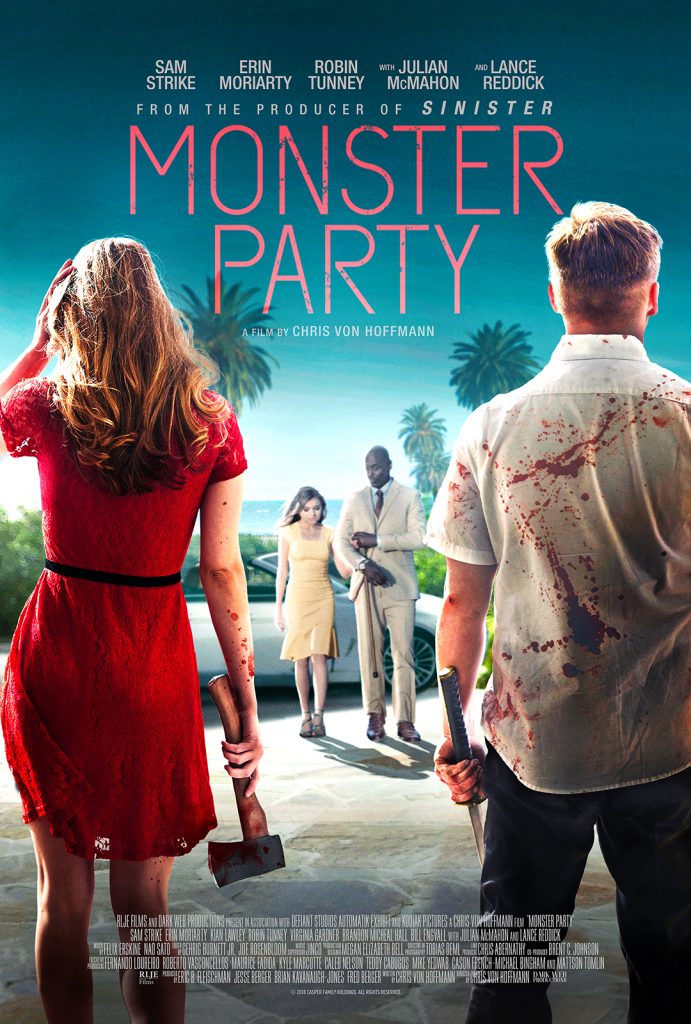 Von Hoffmann, as if aware viewers will know what’s coming when they sit down to watch MONSTER PARTY, makes no secret of the fact that the trio are walking into bad trouble, with ominous music and close-ups from the moment they arrive at the Dawson home. They are met with hostility by the Dawsons’ son Elliot (Kian Lawley), though Casper starts to feel a little more favorably about the gig once he gets a load of their hot daughter Alexis (Erin Moriarty). While there’s not a great deal of mystery to MONSTER PARTY’s buildup, von Hoffmann successfully builds tension as we wait for the other high-heeled shoe to drop. When it does, it’s a startling, well-staged scene that throws the movie into a higher, bloodier gear, pitting our three heroes against three times as many villains who want to paint the mansion’s tidy white walls with their blood.

MONSTER PARTY plays upon but doesn’t force the class differences (beyond a line where Patrick says he wants to make the Dawsons great again) between the three interlopers and the high-class hosts and their guests, most of whom are young people with attitudes just as vicious as Elliot’s. Von Hoffmann’s best inspiration lies in the character of Milo (a well-cast Lance Reddick from FRINGE), who arrives as a sort of chaperone for the youths and then proves to be a cross between a 12-step-program supervisor and a cult leader. His presence and interactions with the rest of the group are a key factor in elevating MONSTER PARTY above a simple us-vs.-them bloodbath, and von Hoffmann demonstrates some real aptitude for balancing the stalk-struggle-slaying material with mini-dramas amongst the bad guys.

The tension lapses a bit in the third act, though the writer/director still has one great bloody setpiece up his sleeve before reaching his conclusion. A polished production and a cast who are all in tune with von Hoffmann’s vision of nastiness among the very rich make it worth putting MONSTER PARTY on your RSVP list.