With A QUIET PLACE PART II postponed by the pandemic, Paramount has released a placeholder of sorts to Premium VOD in the form of LOVE AND MONSTERS. Also taking place in a world overrun with predatory creatures, it’s a more youth-oriented variation in which the narrative is driven by young love rather than stark survival (and parenting) instincts, and no one we care about is in any real danger of dying.

As such, LOVE AND MONSTERS is paced well and colorfully told, even as it doesn’t bring many fresh ideas to the table. It also borrows from ZOMBIELAND (though not as much as its trailer suggests), WALL-E and even STAND BY ME, complete with the Ben E. King song on the soundtrack, and opens with the now de rigueur animated prologue. Here, the illustrations are motivated by the artistic bent of its hero, Joel Dawson (Dylan O’Brien from the MAZE RUNNER movies and TEEN WOLF series), who lays out the situation in snarky voiceover: Seven years ago, the Agatha 616 asteroid was hurtling toward Earth, and the missiles sent to blast it apart had the unfortunate side effect of raining chemicals back on our planet. They caused cold-blooded wildlife to greatly expand in size and appetite, wiping out 95 percent of the population and sending the survivors to huddle in various outposts and bunkers. 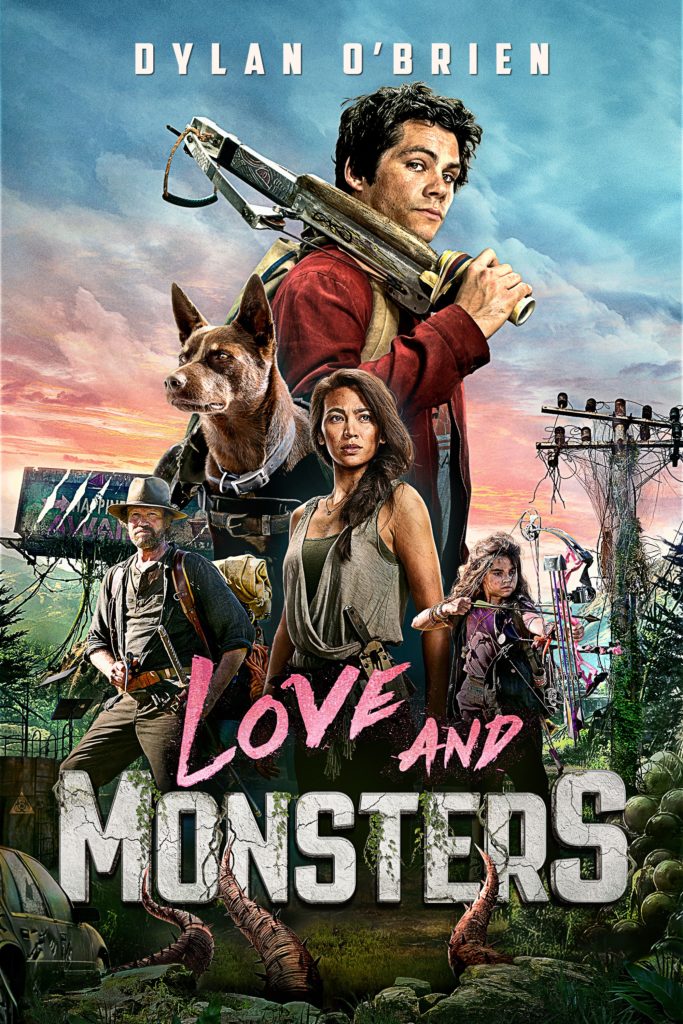 In his own particular habitat, Joel (who’s now 24, but looks no different than the 17-year-old we see in his flashbacks) keeps a journal with pictures of the various species threatening them and their weaknesses, and contributes his cooking skills, but is considered a “liability” when it comes to missions outside the bunker. When he manages to make radio contact with the long-lost love of his life, Aimee (Jessica Henwick), he decides that there’s nothing really keeping him from setting out to make the 85-mile trek to her outpost. Except, that is, his lack of survival skills, for which he will clearly have to trade in his wise-guy attitude as he makes his way through dense forests and the ruins of civilization, both crawling with enormous amphibians, insects and other arthropods.

The assorted beasts Joel runs into have been imaginatively, grotesquely extrapolated from real-life species by the CGI team (with occasional live-action creations by BOAR and DAYBREAKERS’ Steve Boyle), and true to current form, they all make sounds like combinations of wild animals and misfiring diesel engines. Director Michael Matthews, making his U.S. studio debut following the South African Western FIVE FINGERS FOR MARSEILLES, energetically orchestrates these encounters, which serve as landmarks on a storytelling path whose true point is Joel’s maturation as he makes his way to Aimee. He receives help along the way first from a stray dog named Boy (cf. A BOY AND HIS DOG?) that adopts him, and then from the rough-hewn Clyde (Michael Rooker), who’s traveling with a young girl named Minnow (scene-stealing Ariana Greenblatt). Clyde’s no-B.S. lessons in creature combat will definitely have you thinking of ZOMBIELAND’s Woody Harrelson, though it’s always fun to see Rooker in a genre role (and a better one than he had earlier this year in FANTASY ISLAND), even one with the sharper edges sanded down.

Though there are few surprises to LOVE AND MONSTERS, screenwriters Brian Duffield (UNDERWATER, THE BABYSITTER) and Matthew Robinson deserve credit for not taking the story to its most obvious (and potentially tween-audience-pleasing) conclusion. They and O’Brien also succeed in transitioning Joel from kinda annoying to a young man you can sympathize with, and there are a couple of unexpectedly moving moments on his journey. Mostly, though, LOVE AND MONSTERS is an occasionally exciting diversion that also benefits from Lachlan Milne’s cinematography of beautiful Australian locations (with THE ROAD WARRIOR’s Bruce Spence in a tiny role), and will help keep its target audience sated until the bigger fantasy/action/monster-movie guns are (hopefully soon) able to return to theaters.