Seeking definitive proof that the immortal soul of Emily Post was not consigned to hell after the socialite writer passed away back in 1960? Well, you’re in luck: The British supernatural grinder HOSTS (now on VOD and digital) provides that in spades, setting loose–with a little help, the film suggests, from the fracking industry–a shoal of demons who clearly are not acquainted with even the most basic elements of dinner etiquette. You know, the little nuances that make a big difference around the table, like, say, don’t smash in the skulls of nice fellow guests before appetizers are served, or use your thumbs to dig the eyeballs out of a skull when the salad fork is right there.

No, these entities clearly never cracked a copy of ETIQUETTE IN SOCIETY, IN BUSINESS, IN POLITICS, AND AT HOME. 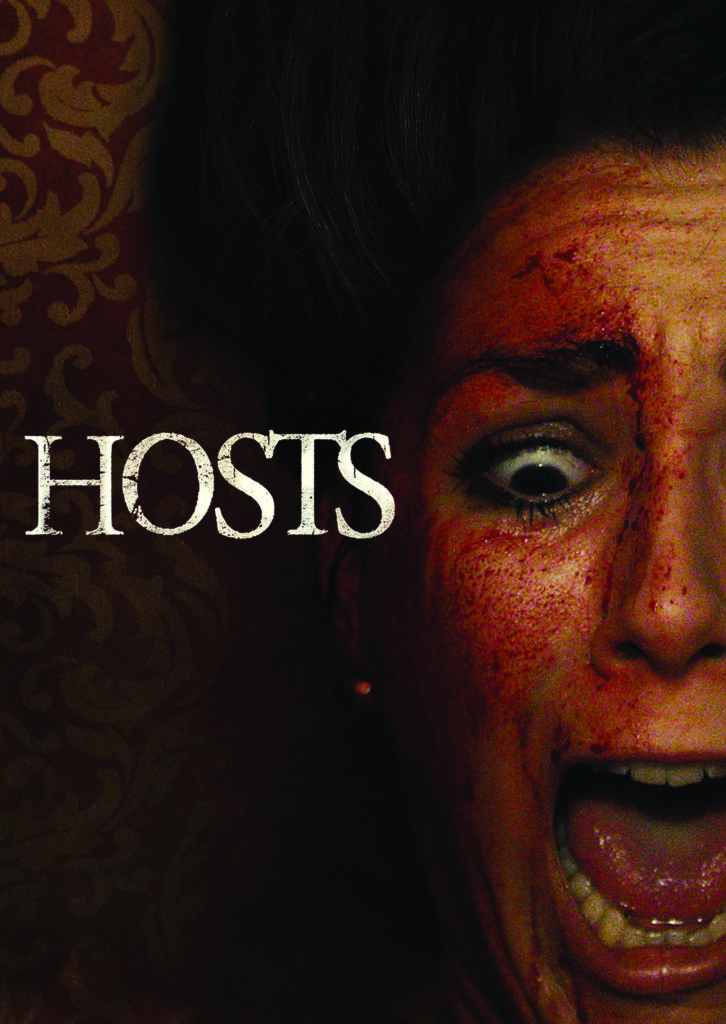 The film begins with appropriate earnestness and innocence. It’s nearly Christmas, and young couple Jack (Neal Ward) and Lucy (Samantha Loxley) are engaged in a bit of G-rated canoodling before (somewhat reluctantly) heading over to the Hendersons’ place next door for a holiday feast. Unfortunately, the jolly spirit of the evening is interrupted by some unexplained lights in the backyard–which are soon shining deep in the pair’s respective mouths with extremely sinister effect. Jack and Lucy keep their dinner date with the neighbors–father Michael (Frank Jakeman), mother Cassie (Jennifer K. Preston), adult children Lauren (Nadia Lamin) and Eric (Lee Hunter), and pre-teen Ben (Buddy Skelton)–who are simply the most delightful, pleasant bunch imaginable. It’s like being a fly on the wall of a basic-cable holiday film.

Clearly, things will soon devolve, but co-directors Adam Leader (who also scripted) and Richard Oakes wisely let the good times roll for a stretch, exploring the weird tension that comes from balancing the heartwarming family repartee against the hidden darkness in their midst. It’s an effective lull: When the harrowing violence and evil arrive in an ultra-brutal explosion of viscera, we’re invested in the Hendersons enough to feel the full terrifying emotional impact of the blows, and all that will follow. So what, precisely, does follow? Well, there’s torture and death and glowing eyes and enough possessed-cat-and-sobbing-mouse intrigue to give you not-so-minor palpitations. This is one box under the tree that is most definitely not for the faint of heart.

To be honest, the nature of HOSTS’ monsters is convoluted at times. As wonderful as the visual of a very old haunted television à la POLTERGEIST is, for example, overtaking a person’s soul via a live broadcast of a descent into (presumably) hell seems disconnected from the less complicated earlier possessions. And there is some family lore and mythos explication that arrives and departs like a confusing drive-by shooting. That said, the pacing, willingness to go to extremes and topnotch performances keep the film affecting and engaging. Loxley and Ward are utterly, believably diabolical, and the actors portraying the family are loveable and imbued with a relatable complexity just below the surface. The interplay between Lamin and Hunter as well as Jakeman and Preston amidst both the conventional and impossible are pitch perfect. And young Skelton completely sells the horror of a child watching the adult world fall apart around him.

Above all, HOSTS deftly demonstrates how traumatically we can be tested when we let our guard down and simply expect tradition and intention protect us. Sound familiar?