Does the current state of Horror exhaust you? Are you bored to death of symbolic monsters, tasteful violence, “woke”-ness, and credible performances? Do you prefer your murder clowns a little less rhetorical device, a little more blunt force object? If you answered “Yes! Good God, Yes!” to any of these questions, do I have a watch for you!

Damien Leone’s TERRIFIER beckons us back to a simpler time. A time when bloodletting was just an excuse for good effects work and all a cinematic serial murderer needed was a killer look and a little charisma to connect with audiences. Though reviews have focused on its “ 1980s throwback” sensibility, this really only applies to its synth-heavy score (almost redundant to mention when discussing the Horror indies of today) and admirable devotion to practical effects. No, TERRIFIER isn’t redolent of the comparatively demure creations of Carpenter, Craven, and Cunningham, but hearkens back to the halcyon days of the early 2000s, when Freddy was passé, Leatherface was but a shadow of his former self, and Torture Porn was the soup du-jour on everyone’s palate. 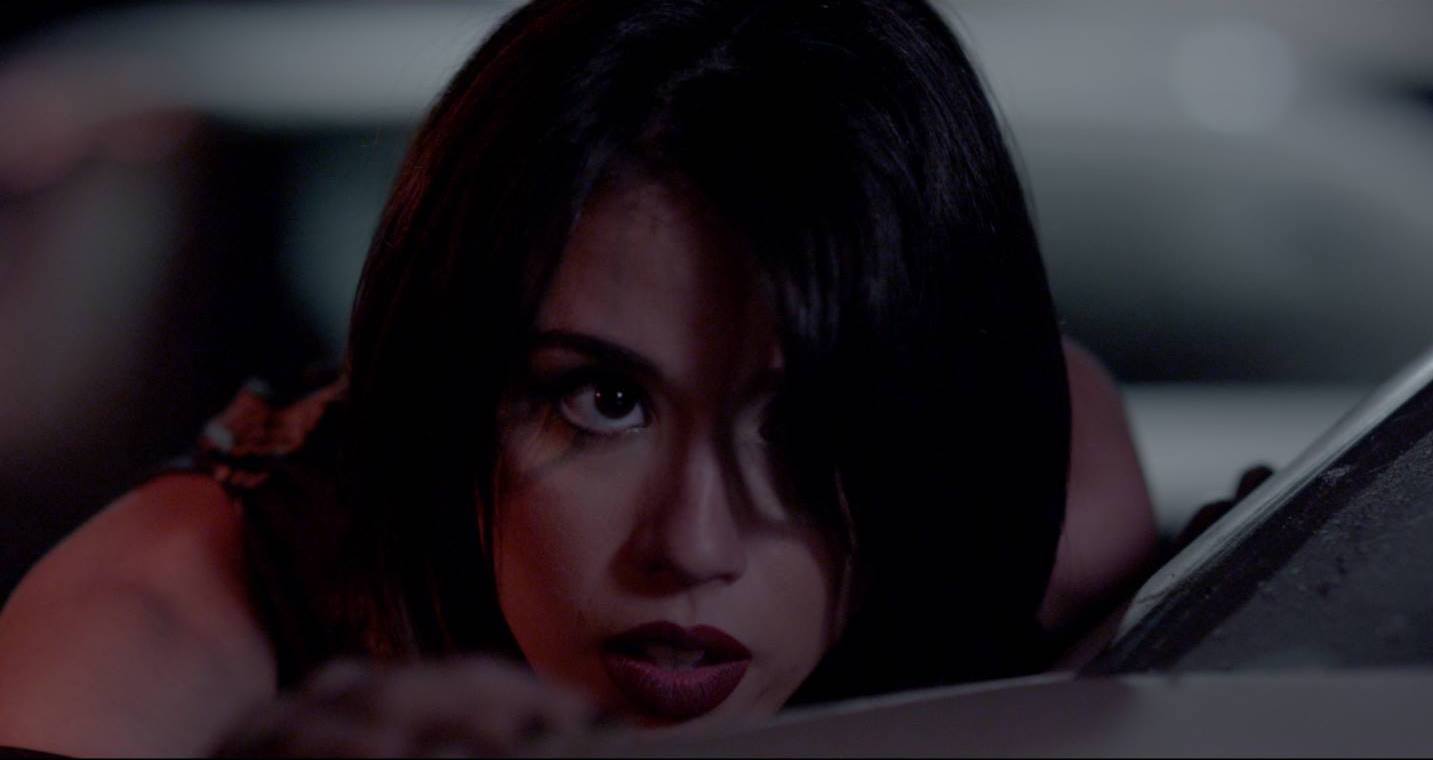 Art the Clown, a character created by Leone and heavily featured in his middling ALL HALLOWS’ EVE (2013) as well as a couple earlier short films, finally grabs the spotlight in TERRIFIER. Though largely unconnected to the character’s other appearances, the movie pays homage to them with a crackling television set that begins the film. After witnessing a nasty, pre-credits face-crushing and Art’s outfit and makeup regimen (a la Schumacher’s BATMAN movies) Leone introduces us to his two heroines/nubile meat sacks, Tara (Jenna Kanell) and Dawn (Catherine Corcoran). The ladies (one, an edgy skeleton, the other, a dumb blonde scarecrow who uses the R-word like it’s 2004) are grabbing some grub on their way home from a Halloween party when they encounter the clown. Tara is sufficiently disturbed by the silent, leering freak, while Dawn takes selfies with him in a bid to dispel her friend’s nervous energy. When the girls leave, Art follows them for a night of bloodshed and terror that only Tara’s studious sister, Victoria (Samantha Scaffidi) may be able to save them from.

The barer-than-bare-bones plot makes any Friday The 13th  film look practically overwritten in comparison, and the leads would hardly pass for college students even in the more X-rated corners of the world wide web. The performances are fine, though a whackadoo homeless lady (Pooya Mohseni, as the thoughtfully credited “Crazy Woman”) that Tara encounters feels out of place and gets far too much screen time in the film’s back end. The real draw, of course is David Howard Thornton as Art, who is a sheer joy and terror in every moment he’s on screen, which, thankfully, is almost all of them. Replacing ALL HALLOWS’ EVE’s Mike Giannelli, this Art is more lanky and has been given a slight though noticeable visual upgrade from his previous incarnation. Though Giannelli’s mute, shoulder-wiggling giggles are missed, Thornton is an overall more captivating presence. His Art is equal parts hilarity and menace, punctuating every abominable act with a well-measured moment of physical comedy. The all-too-brief diner scene is TERRIFIER’s highlight: Thornton’s eerie mugging immediately calling to mind great physical comedians of ages past. A LIMELIGHT-era Charlie Chaplin as directed by Rob Zombie.

Unfortunately (or fortunately, for some) Thornton’s Chaplinisms are as classy as the film gets, and once the blood starts flowing, Leone heaps on the gore by the loving bucketful. The effects—from Art’s unique method of stabbing and waggling the instrument about in the wound, to a jaw-dropping upside-down bisection—are impressive, if not terribly compelling or frightening. This is due to a structural miscalculation. As Leone stated in a recent interview with CelebBeat:

“I’m a diehard slasher fan so I like to think I know what slasher fans enjoy most. Other than probably SCREAM, the weakest aspect of almost every slasher film is the stereotypical characters talking about nonsense for a majority of the running time. I wanted to eliminate or shorten as much of that as I could and get right down to the nitty-gritty.”

Now, far be it from me to speak for all slasher fans (as Mr. Leone seems so comfortable doing), but I would argue that those “stereotypical characters talking about nonsense” are a large part of the corny appeal of the classic franchise slasher (isn’t hating Sheldon Hardesty and Shelly Finkelstein half the fun?) and that focusing solely on sadistic gore—no matter how impressive—is more in line with the early 2000s Torture-Porn boom than anything remotely 1980s. Sure, the slashers were shocking in their day, and watching them now is a wholly different experience, yet watch them we still do! The gore may not have the extremity of Leone’s, but those films used mounting tension and violence that was brief in duration to strong effect. A large part of this was out of practicality. When Tom Savini was designing his signature set-pieces, the camera was used to hide the rough edges. Nowadays, filmmakers like Leone can linger on the cinematic brutality they’ve worked so hard to create, but this comes at the cost of a satisfying pace and sense of payoff. Those things, and the annoying, archetypical teens, are the very elements that give those old-school slashers their comfort food-like pleasure. 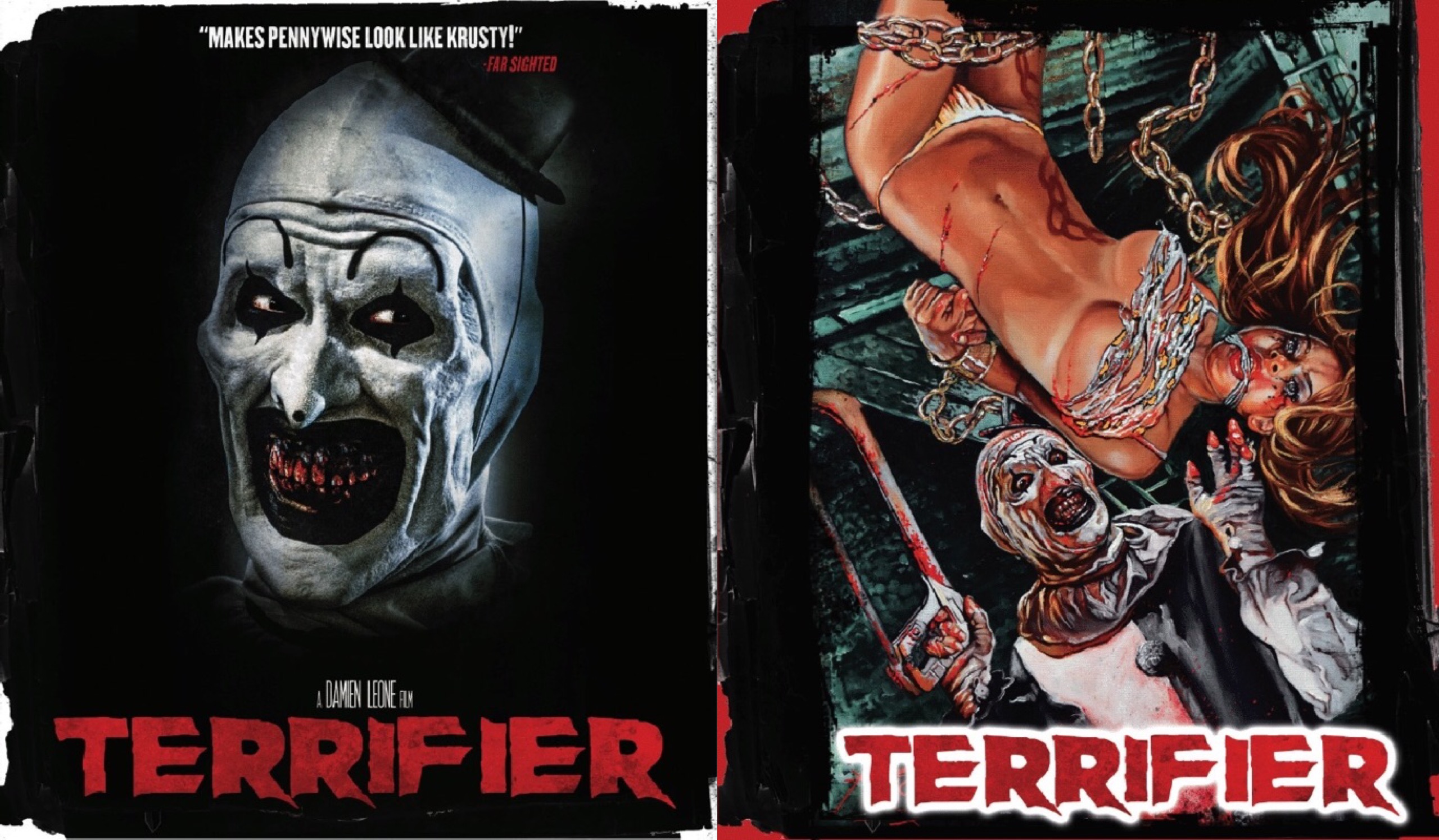 Epic Pictures’ region-free Blu-ray/DVD combo should be a welcome addition to any fan’s shelf. The film comes in a standard case with reversible cover art (depicting a gnarly throwback version of the film’s poster) and features an audio commentary with Leone and Thornton, a brief behind the scenes featurette, an interview with Jenna Kanell, an Art the Clown time-lapse makeup video, stills and red/green band trailers. The pinky browns of Leone’s visual palette as presented on the disc are absolutely pristine, and definitely worth shelling out for if one wants to see TERRIFIER in all its chilly, digital glory.

Despite Damien Leone’s insistence that TERRIFIER is some sort of love letter to the 1980s, Art the Clown winds up feeling more like Jigsaw than Jason. If both characters’ affinity for tiny tricycles isn’t proof positive enough, TERRIFIER’s use of industrial rock, slick visuals, and the way it approaches gore like a pig in shit makes it more spiritually similar to SAW and HOSTEL than A NIGHTMARE ON ELM STREET. However, for many who grew up on the unbridled, gory delights of those films, this hybridization will be TERRIFIER’s appeal. As a pure, gross, down ‘n dirty experience in abject cruelty that keeps its tongue firmly buried in cheek, TERRIFIER is successful. Those looking for a true blue slasher throwback should hold onto their machetes, but anyone intrigued by the concept of a post-Torture Porn slasher will find plenty to grin about on this disc.