Movie Review: Enjoy Rolling In The Filth From “BULLETS OF JUSTICE”

It’s a forgone conclusion that in any prolonged global conflict, one country is going to eventually start cross breeding human beings with animals. Most people assume you would crossbreed humans, known for the weird hairlessness and ability to hold flaming sticks, with tigers, gorillas, sharks, or even a dog. You know, animals that people have actual rational fears of, due to their known prowess and lethality. The Bulgarian/Kazakhstani film BULLETS OF JUSTICE posits that during World War III, people get mixed up with pigs for an unspecified reason, which predictably leads to human beings being hunted down for their sweet, succulent meat to feed our new half-pig overlords. 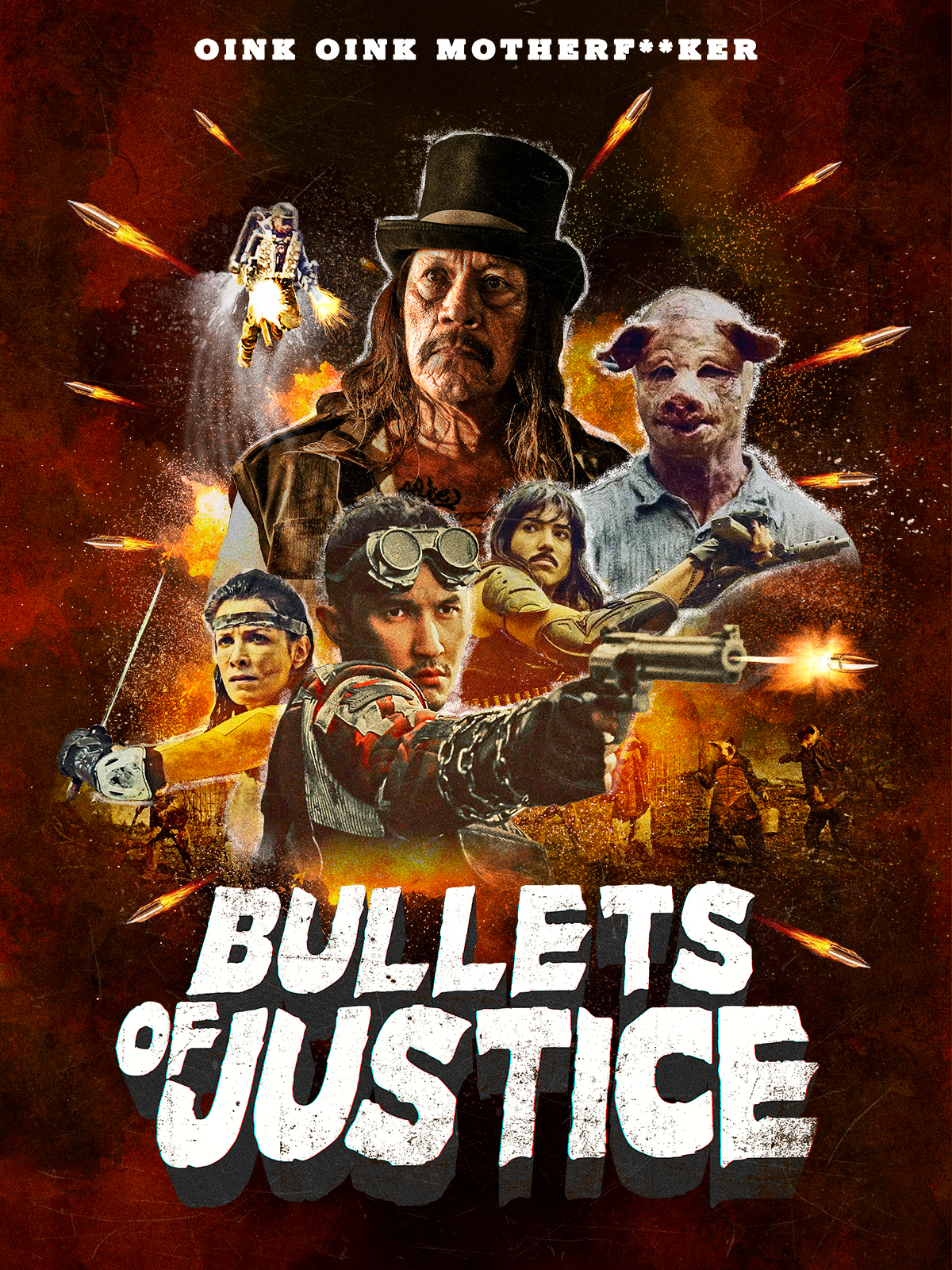 Against that backdrop of human beings being nearly farmed to extinction, we follow Rob Justice, played by writer Timur Turisbekov. Rob is a pig killing savant, something that is cemented early in the film when he faces off against a Muzzle (the new pig based dominant species of the planet), with only his wits, while his porcine opponent has two miniguns, a jetpack, and a trigger happy little person strapped to his back. After a tense round of gunplay and dodging, Rob blows up the Muzzle by doing an amazing three-pointer, throwing a grenade into the little-person-backpack-carrier-thing. It’s pretty rad.

What unfolds after setting the bar so high is beautifully incoherent, gore-filled scatological humor. Rob successfully loses a series of sexy female sidekicks, kills a whole family of Muzzles with the last name of Asshole (whose most notable shared biological trait is having a rectum for a mouth), discovers his long lost childhood love who now has a mustache, and gets himself teleported inside a wall. It makes slightly more sense within the context of the film, but only slightly.

My favorite aspect of the plot is that Rob keeps on botching sexual encounters because he feels like he’s only the second sexiest dude in the apocalypse, as he keeps having intrusive thoughts about a gorgeous man in a bulge pouch. Rob doesn’t once consider that he is simply sexually attracted to this dude, no, these have to be prophetic visions, they have to mean something.

The loose plot that gets us from blood-soaked A to shit covered B is that Rob Justice must find a way to infiltrate the lair of the Muzzles, where their Brood Queen waits. This gargantuan beast is the mother to all pig monsters and is reported to eat over a tonne of human meat a day. Rob is going to kill her, and finally take humans off the endangered species list. Surprisingly, he encounters a frighteningly large number of human traitors along the way, who seem to have zero qualms about selling out their entire species. Is this a critique of the short-sightedness of human consumption, or just a clever plot device to justify more gunfights and sex scenes? You be the judge.

The film functions bizarrely similarly to a recently reviewed film, Jesus Shows You The Way To The Highway, in that they both use bizarre dubbing and stilted acting to convey the surreal quality of the world. They also play with the very nature of reality in ways that can’t be discussed here at risk of spoiling the ending of both. Suffice it to say, the difficulty audiences will have following the plot is very much intentional, since events may be less linear and more dreamlike than you expect.

The biggest thing working against BULLETS OF JUSTICE is also what might be its greatest draw: the presence of Danny Trejo. As usual, Trejo is incredible, sinister, angry, and adorable all at once. The issue is how heavily marketed he is as being a large part of the film, when he is only present for the first five minutes, and only in a flashback. He has a few pop-ins as a ghost, a la Dexter’s dad, but his screen time is a fraction of a fraction of the total running time. This shouldn’t put potential viewers off, though, since the film is absolutely worth watching all the way through, and probably multiple times. It just isn’t a Danny Trejo film, so fans of his might feel a little hoodwinked. 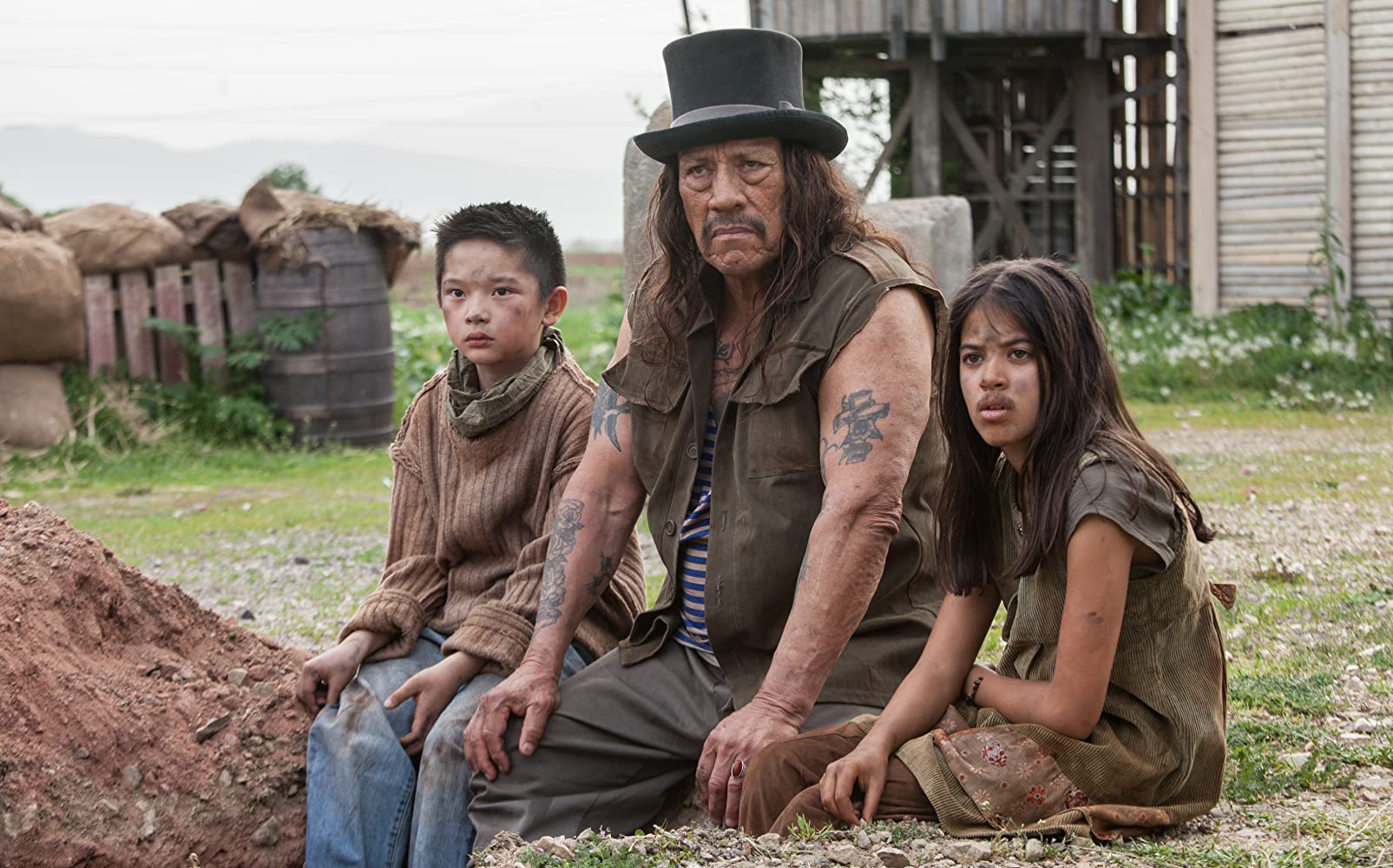 BULLETS OF JUSTICE goes whole-hog on everything it tries to do. Gore, poop, sex, nonsense, scenery-chewing, and running gags are all done over the top, and with great success. More approachable and fun than usual surreal foreign films, this is a low class, high concept head trip.

BULLETS OF JUSTICE, from The Horror Collective, hits VOD on October 15th.

The Horror Collective has been up to a lot of great stuff lately, so check out what else they got cooking on their Facebook, Twitter and Instagram.