OPEN 24 HOURS takes place in a world where a young woman can tell a prospective employer that she responded positively to the “Have you ever been convicted of a felony?” part of her job application because she set her boyfriend on fire, and his response is a calm “Did he deserve it?” Throughout, the horrific backstory of heroine Mary (Vanessa Grasse) doesn’t really square with what we’re seeing in the movie’s present.

Set in what is supposed to be rural Missouri but has a decidedly Eastern European look, OPEN 24 HOURS takes place largely at a remote gas station/convenience store where Mary takes a graveyard-shift job after doing time for torching her beau. Turns out she had a good reason: He was James Lincoln Fields (Cole Vigue), the “Rain Ripper” who murdered 35 women and, in a number of cases, made Mary witness his awful crimes. The news media dubbed her “The Watcher” and she is now a pariah, though this is told rather than shown because the only people we see Mary interact with outside the gas station are her one loyal friend Debbie (Emily Tennant) and her hostile parole officer Tom (Daniel O’Meara).​ 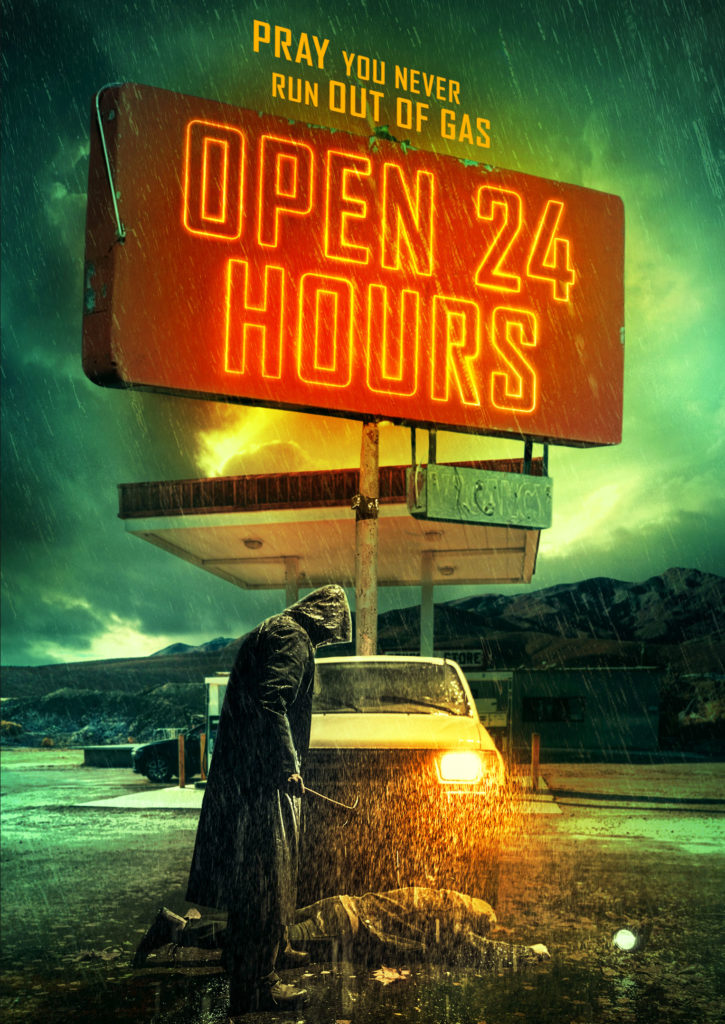 That night-shift gig will earn her some much-needed money with a minimum of social interaction, which helps because she’s already seeing people who aren’t actually there. Diagnosed as paranoid-delusional, she’s been having visions of James doing his violent business, of his bloodied victims and perhaps even of receiving phone calls from the angry mother of one of James’ victims. James in fact survived the burning and went to prison, but now she glimpses him stalking her both before and during her first rainy night on the job, and the narrative thrust would seem to be the question of whether he’s actually there or just in her mind. Except that from the beginning, we’re given shots of James when Mary isn’t looking, and scenes of him in action when she’s not around, which means either he is actually out and about or writer/director Padraig Reynolds is cheating.

He also doesn’t make a fully convincing case for Mary’s prior behavior. All we see of her and James’ past interaction is a flashback to her discovery of human remains in their basement, and though Grasse does her best to sell a lengthy explanatory monologue midway through the movie, it remains hard to grasp why Mary didn’t bolt or call the cops then, or after being forced to watch his subsequent slayings for so long. (The idea that Mary might have been excited on some level by James’ murderous exploits is a potentially darker avenue that Reynolds chooses not to explore.)

While there are a few well-staged setpieces and squirmy gore moments (courtesy of effects artists Josh and Sierra “Russel,” as they’re billed), OPEN 24 HOURS ultimately doesn’t engage as the study of emotional survival it’s aiming for. Reynolds prioritizes shock moments (goosed by Holly Amber Church’s overinsistent music) over psychological acuity, and occasional implausibilities in behavior and details–some of the action unfolds in the roomiest gas-station bathroom you’ll ever see–don’t help. One subplot suggests that it could have provided a proper payoff to Mary’s situation if given more attention; instead, it’s resolved shortly past the hour mark, and the story gives way to protracted, predictable psycho-movie shenanigans, less concerned with resolving Mary’s trauma than with wallowing in the gore. The annoying inconclusive ending cements the feeling that your 24 HOURS–or 103 minutes–would be best spent elsewhere.