Created by the brothers Jagger (Ben and Dean), CORBIN NASH follows, well, Corbin Nash (also played by Dean) in his pursuit of all things evil. He’s a hot-headed cop on the edge that’s seeking the culprit responsible for a rash of abductions throughout the city. Told via a fractured timeline, Corbin’s quest sends him into the borough’s darkest corners; against the vilest enemies. Unfortunately, his police procedural is cut short when the truth regarding the disappearances rears its ugly head as something far more otherworldly. . .

CORBIN NASH isn’t a bad film by any means, in fact, it’s pretty ambitious at points. It’s just that much of its subject matter is simply old hat. The Jaggers have done a fine job replicating vampire lore, but haven’t done anything new with it. That, and several parts of our hero’s adventure (like a willing woman allowing a gravely wounded Corbin to drink from her in a sensual way) feel outright pulled from other movies like the first BLADE. It’s this sticking to convention that keeps CORBIN NASH from developing its own stellar disposition. 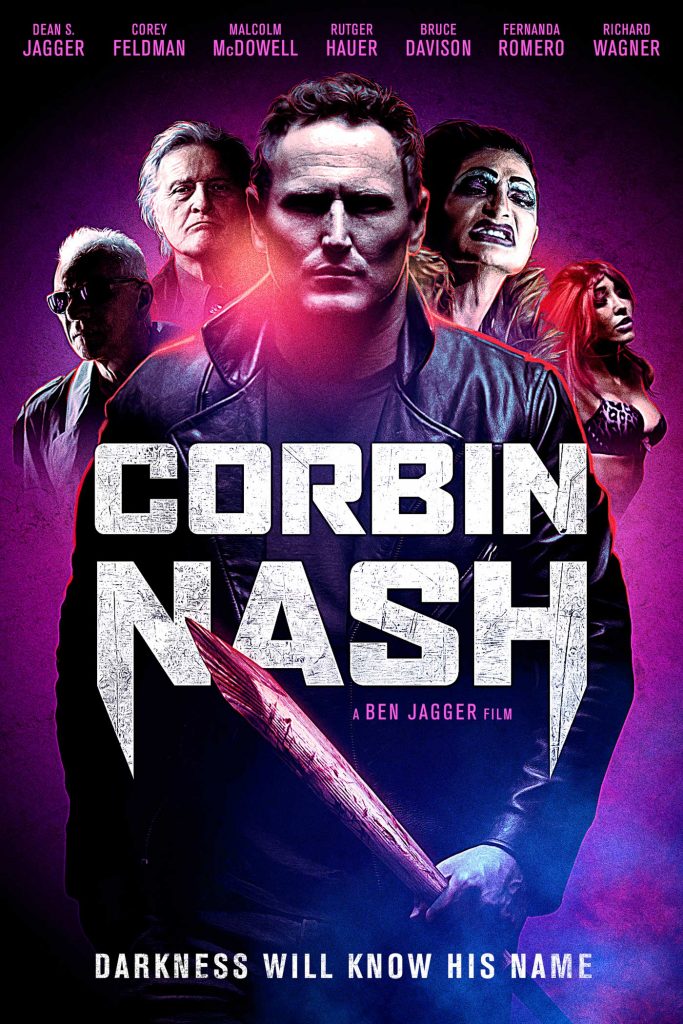 However, it’s CORBIN NASH’s waning tone that causes the most derision. It’s a broodingly serious movie that also attempts to be campy. This undertaking proves a bit faulty as it causes the more intimate moments to be undermined by the ridiculous. Case in point, Corey Feldman’s “Queeny”; a bisexual transvestite vampire with a penchant for post-coital violence. While the character could have been genuinely creepy in a Buffalo Bill kinda way, Feldman is too over the top with line delivery that comes off like he’s striving for a performance akin to Divine (on Halloween) meets Jennifer Coolidge. That, and his makeup just looks sloppy. I was actually quite excited to see Feldman finally doing something beyond his recent (and strange) Youtube videos, but they missed the mark in making his character worthwhile.

Despite there being an overarching nemesis, Queeny and his toothy love “Vince” (Richard Wagner) are this film’s primary villains. Thus, the tonal shifting encompasses far more than just a single character’s actions (Queeny), but practically every scene in which this duo is onscreen. As the big bad vamp is relegated to nothing more than cameo status, it’s these two that carry the story’s antagonism. Unfortunately, their personalities juxtapose that of Corbin Nash’s to the point of parody. Their scenes are simply cheesy and almost feel pried from another project. However, that’s not to say they’re not interesting. Feldman seems to be having a helluva time portraying Queeny and his/Vince’s sequences almost always have some sort of absurd combination of blood, nudity and red-eyed teeth-baring. So there’s that.

The fluctuating mood almost makes sense given the oscillating structure of the film. As this is obviously attempting to be the first installment of a cinematic franchise (which I’m sure the Jaggers are hoping for), CORBIN NASH tries to establish multiple dynamics without sticking to just one. It almost comes off as though they’re waiting to see how audiences/critics react before settling on just one avenue. Corbin Nash is a vampire hunter (as his foes are the fangy monsters of myth), but somewhere along the lines, his extended moniker was altered to that of a “demon hunter”. There’s an underworld of hooded vampires running crime a plenty, but a large focus of the movie is placed on a fight club that the evil overlords run. Here, combatants literally fight to the death within an epidermal ring. The logic of this sparring is rather inconsistent, but it’s where Corbin spends a good deal of his suffering amidst other slaves and tattooed freaks in need of a brutal beatdown. There’s also an entire backstory to Corbin Nash and his familial dealings with the vampires which is equivalent to HARRY POTTER and his feud with Voldemort (and also lends to Corbin’s signature weapon herein). The movie contains quite a bit of foundational content that, after finally being established, only has approximately 15 minutes left of Corbin Nash actually being a “demon hunter”. That, and I think they could’ve kept the elucidating “old man” character to just one, instead of three.

I’m a devotee of Rutger Hauer and was disappointed to find that he’s (once again) only in this feature for a single moment of plot-explanation. Nothing more. But wait! There’s also another story interpreter in Malcolm McDowell’s old-man (deemed the “Blind Prophet”). There’s even a third old-man commentator in Bruce Davison that provides verbal solace for Corbin Nash. Much like the plot’s construction, sometimes quantity doesn’t mean quality and less can definitely be more. Instead of having three different actors of varying degrees of notoriety perform pieces of each other’s similar duties, it would have been better to just have one of these revered actors perform the action of “old-man-that-knows-way-more-than-he-lets-on” rather than essentially divide his screen time between three different actors all pontificating the same thing. It looks good for marketing, but for viewers like me that want to see fully-fledged characters played by vets, it feels more like a cop-out to only have them here for a minute or two; performing blasé tasks before they’re ushered off-screen. McDowell is the only one of the bunch that’s consistent as CORBIN NASH’S narrator, but again, would’ve been great to see Hauer have more of a presence.

Once all of this preliminary exposition is out of the way and Corbin Nash is finally allowed to begin his much-deserved rampage (at the very end), there’s more fun to be had via an all too brief siege that has Corbin stabbing, shooting and smashing his way through a building of ne’er-do-wells. It’s this style and content that I wished the whole movie maintained. Disappointingly, the final fight following this pales in comparison, making it a bright spot in an otherwise conventional vampire flick.

Ben and Dean Jagger obviously have a soft-spot for horror and their ambition herein is quite admirable. The character of Corbin Nash and Dean’s subsequent portrayal of the brooding brute is both fierce and committed. While I wasn’t enthralled with everything this vampiric bloodbath supplied (and wished they had applied more on the backend/climax) I was nonetheless entertained for the time it was on. Hopefully, now that the burden of explication is out of the way, the inevitable sequel can maintain focus on what Corbin Nash does best: stake vamp ass.