Movie Review: Classes are in insane session in “BOARDING SCHOOL”

The curriculum at BOARDING SCHOOL includes explorations of both religious and sexual identity, along with unwholesome authority and parental figures and adolescent mental dysfunction. Tonally, it’s as confused as its young hero, but it certainly holds the attention.

Our story begins in “New York City, The 90’s,” where young Jacob Felsen is afflicted by night terrors and waking disturbances too. He’s played by Luke Prael, who was the object of the young heroine’s crush in EIGHTH GRADE, and imbues Jacob with a sensitivity that’s more persuasive than his New York accent. His mother Isabel (Samantha Mathis) is high-strung, to say the least—instead of sympathy for his nightmares, she berates him for waking her up with his screams—and she’s in an especially negative space because her own mom has just died. “She was a horrible woman,” Isabel says, suggesting for a moment that we might be heading into HEREDITARY territory. 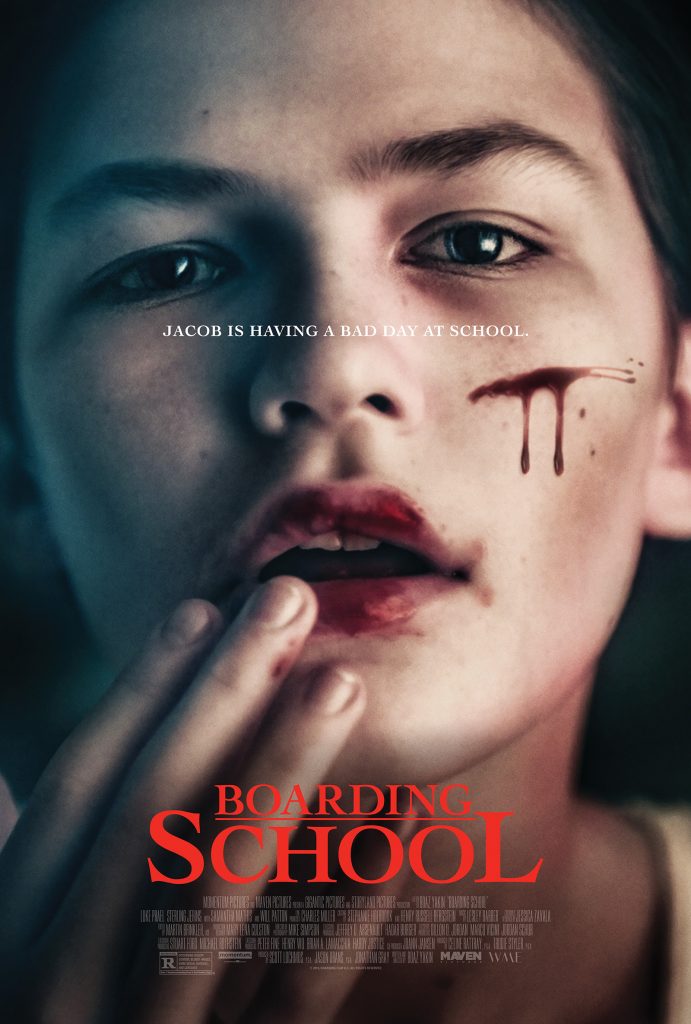 Instead, the movie heads off into different directions—a few different directions. At the funeral, a strange old woman regales Jacob with a weird, frightening story about his grandmother’s experiences during WWII. He is bullied at school, and at a dinner party, the host’s daughter Christine (Sterling Jerins, who resembles a young Jennifer Connelly and played Judy Warren in the CONJURING films) says he’s “pretty” as opposed to handsome. Later, he puts on his deceased grandma’s dress and dances around the room. Clearly, he has a lot on his psychological plate even before he’s sent to the titular, threatening upstate institution.

There are only a handful of other students at the remote school: big, mentally deficient Elwood (Nicholas J. Oliveri); Frederic (Christopher Dylan White); who suffers from a severe case of Tourette’s syndrome; twin brothers (Kobi and Kadin George) of no particular distinction; and Phil (Nadia Alexander), the most articulate of the kids despite being horribly burned (though Alexander’s makeup is more akin to Eric Stoltz’s MASK visage). Also Christine herself, who continues to wield a sharp tongue, calling her classmates “retard” and “spaz.” Unfortunately for the kids, Dr. Sherman (Will Patton), who runs the place with his wife (Tammy Blanchard), is a big fan of corporal punishment—though Christine seems to actually enjoy it—and a religious fanatic who tells his pupils they are “despised by your peers, despised by your parents, despised by God.” At the same time, the Shermans bait the Jewish Jacob with pronouncements like “I thought your people didn’t eat bacon” and “You’re a clever boy, but then your people usually are.”

As may be evident from this synopsis, the first hour of BOARDING SCHOOL is not so much a horror film as a junior snake-pit melodrama in which things go from bad to worse for the young students. Despite all the giallo-esque colored lighting, what’s going on behind the scenes at the school doesn’t play as odd as the interaction amongst the kids themselves, and for all Yakin’s empathy for Jacob’s state of mind, the emotional and mental eccentricities of some of his classmates are played pretty broadly. It’s all bizarre enough for BOARDING SCHOOL to be disreputably entertaining, as more flashbacks to Grandma and episodes of Jacob’s transvestism are stirred into the stew, and Jacob is an intriguing enough young hero to keep us watching as things spin out of control around him.

By the time the movie suddenly becomes a blood- and corpse-fest at around the 75-minute mark, Jacob has gone through so much that he’s pretty blasé about discovering dead bodies and learning the secrets they reveal. Yakin stages the final-act horrors with enough gusto that the viewer is more engaged; his previous directing credits have run the gamut from the inspirational sports film REMEMBER THE TITANS to the Jason Statham actioner SAFE to the heroic-war-dog saga MAX, and he is clearly relishing the opportunity to pour all the anxieties and fears he’s ever wanted to explore in a horror feature into one over-the-top cinematic package.