The imprimatur on BLUMHOUSE’S FANTASY ISLAND, along with the trailers and posters, naturally suggest a horrific take on the TV favorite of the ’70s, though the scary stuff is only sporadic for a good portion of the movie. A lot of this FANTASY ISLAND plays in the same manner of those episodes of yore, melodramatically spinning variations on the notion that having your deepest wishes become reality might not be as satisfying as you’d hope. That’s true of the film as well, which sets up promising possibilities but is underheated for the first hour or so and absurdly overplotted in its final act.

BLUMHOUSE’S FANTASY ISLAND does not, in fact, stray too far afield from the series, in which the guests sometimes saw their desires interpreted in unexpected and threatening ways and had no choice but to see them through to the end. The same is true for the quintet who arrive on “the plane!” to the tropical resort (enticingly shot on gorgeous Fiji locations by GET OUT cinematographer Toby Oliver) owned by the enigmatic Mr. Roarke, played by Michael Peña in the role made famous by Ricardo Montalban. The two women are seeking to redress issues in their pasts: Gwen (Maggie Q) is seeking a “do-over” of the night she turned down a marriage proposal, while Melanie (Lucy Hale) wants to get some payback against a former schoolmate who bullied her. Patrick (Austin Stowell) is a cop desiring to see military action as a soldier, while stepbrothers—or, more accurately, step-bros—JD (Ryan Hansen) and Brax (Jimmy O. Yang) simply want to “have it all.” 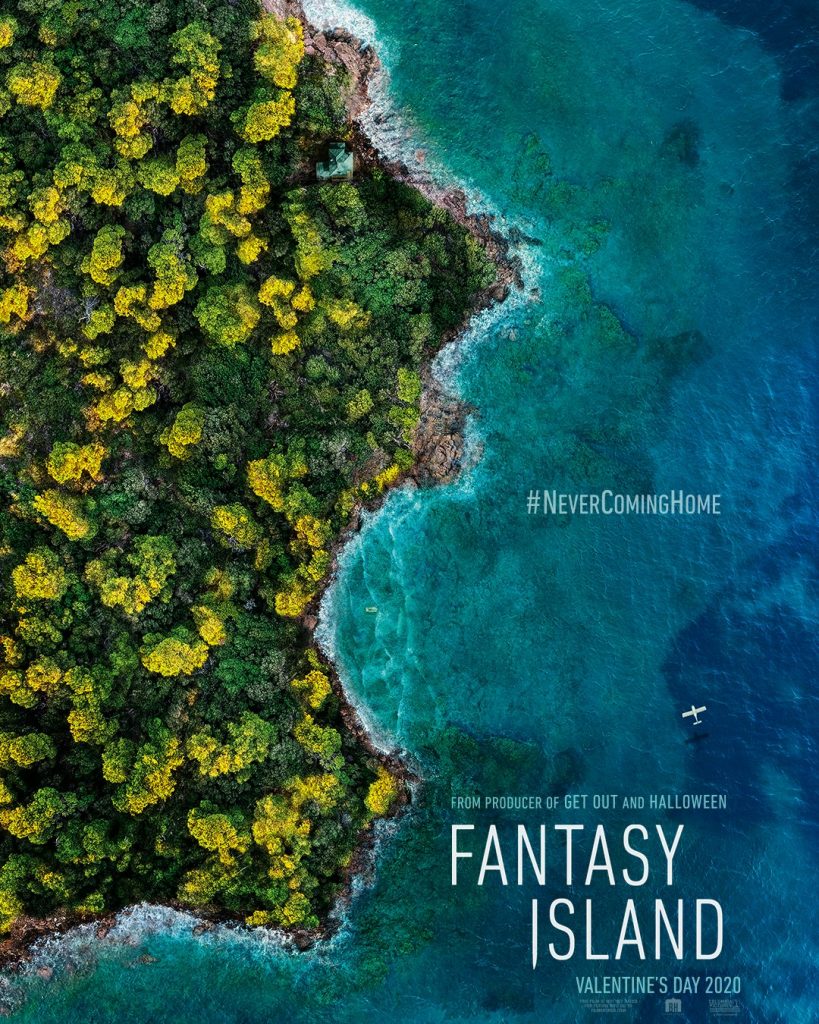 In their mindlessly hedonistic case, that means a raucous, endless pool party with hot girls for JD and hot guys for Brax. Gwen’s in search of romantic/family bliss and Patrick has family issues that Army action might solve. The only overtly horrific situation is Melanie’s, as she finds herself in control of a HOSTEL-esque torture session with her past tormentor Sloane (Portia Doubleday) as the victim. Melanie, who isn’t too bright, at first thinks it’s all being done via holograms, though we know from a prologue that Sloane has actually been kidnapped to the island to suffer Melanie’s vengeance for real. The lesson for Melanie is that revenge isn’t as sweet as she thought, and for a while, BLUMHOUSE’S FANTASY ISLAND is more of a morality play than a horror film, as each of the protagonists learns that you should be careful what you wish for.

As written by director Jeff Wadlow with Chris Roach and Jillian Jacobs, the four storylines develop somewhat engagingly yet without much of a sense of surprise. Despite a few ominous hints here and there (including a supernatural motif familiar from Blumhouse’s BLACK CHRISTMAS), genre fans might get restless waiting for the movie to get to the good stuff, though they’ll know from the PG-13 rating that it’s never going to get too extreme. Among the cast, Q makes the strongest impression as the conflicted, regretful Gwen, while Stowell is stalwart enough and Hale (from Wadlow’s TRUTH OR DARE), Hansen and Yang bring enthusiasm and energy to their more superficial characters. (Michael Rooker also turns up, looking vaguely embarrassed by his silly supporting part.) As Mr. Roarke, Peña attempts an aura of suave menace, but he just can’t live up to Montalban’s effortless cool and charisma in the role (to be fair, it’s unlikely anyone could), and he’s further hamstrung by a script that can’t seem to decide whether or not he’s a villain.

The confusion becomes especially pronounced as BLUMHOUSE’S FANTASY ISLAND heads into its home stretch, where the fright factor becomes more pronounced and the true purpose of the perversion of the fantasies comes to light. Not to give too much away—and I don’t think I could give away everything that happens in the last half hour of this movie if I wanted to—but getting to the truth behind the terrorization requires a head-spinning series of revelations, reversals and exposition, during which the film loses track of its own story more than once. At one point, it tries to convince us that everything is being motivated by someone we’ve already been told is dead, and it becomes so fixated on throwing curveballs at us that it loses any semblance of suspense. All the plot huggermugger also drops the ball when it comes to making the terror relatable; in the end, this is not an identifiable tale of people finding what they thought they wanted from life being turned against them, but another bunch of plot pawns being run through a narrative bag of tricks that empties out long before its creators think it does.