Movie Review: An eerie visit to “THE BEACH HOUSE”

For a little while, the first act of THE BEACH HOUSE (debuting today on Shudder) seems like it might be setting up a domestic thriller about a young couple who find unexpected guests when they go on a getaway in an unpopulated area. Yet the opening shots of what resembles a malignant cloud rising from the bottom of the ocean hint that the threat facing these vacationers will be something other than human, and the events unfold with a steadily mounting sense of unease.

Things aren’t entirely copacetic between Emily (Liana Liberato) and Randall (Noah Le Gros) from the start. It’s not long after they arrive at his father’s oceanfront house (filmed in the Cape Cod area) during the off season that Randall is acting insensitive and dismissive of Emily’s ambitions. Before any issues between them can be dealt with, she discovers evidence–a medicine cabinet full of pills, used dishes in the kitchen–that someone else has been using the place, and they quickly meet Mitch (Jake Weber) and Jane (Maryann Nagel), a middle-aged couple who are apparently friends of Randall’s dad. They’ve come to stay at the house because Randall never told his pop he and Emily were heading there, one of a few ways that the presence of Mitch and Jane, who are themselves friendly, exacerbates the microtensions between the younger couple. 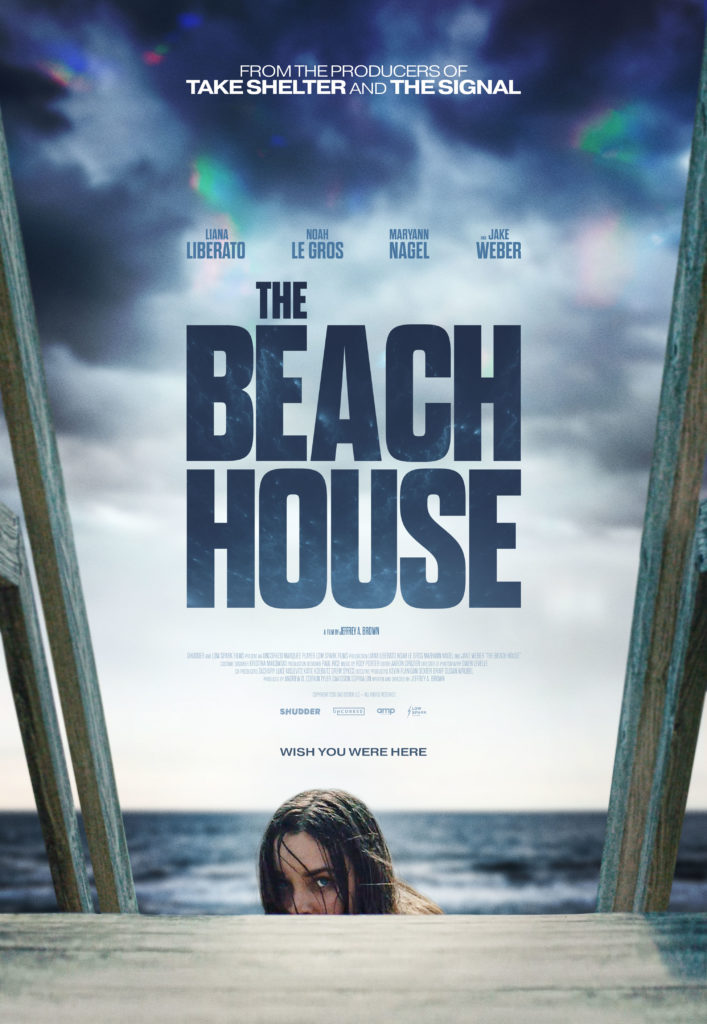 Through the first half of the film, writer/director Jeffrey A. Brown and his cast keep us intrigued with this small group and where their story might be going, even as the horror elements are only briefly hinted at. While the troubled backstory that emerges regarding Randall and Emily’s relationship has one wondering how they’re going to deal with what will no doubt be menacing external forces in the later going, Brown drops hints about the nature of that threat as Emily explains that she’s a science major who wants to study the origins of life on Earth, and how organisms adapt to extreme environments. Then they start noticing a funny smell in the air, the colors occasionally get weird and something starts messing with their heads–and it ain’t the edible marijuana Randall breaks out after dinner.

Brown takes his time bringing the terrors to the fore in THE BEACH HOUSE, allowing us to become fully immersed with his quartet before their world gets thrown out of whack. The atmosphere is one of domestic coziness for a while, before the filmmaker successfully builds an atmosphere of impending doom even in bright sunlight. The feeling of isolation in what should be an inviting and populated seaside locale is especially resonant given the current state of the world, and a simple wide shot of one character walking into the ocean becomes creepier than you might expect. Even the familiar beach detail of a long row of seaweed washed up by the tide carries chilly implications of life cast aside by a greater force.

After the first 50 minutes or so of suggestive mood, THE BEACH HOUSE becomes visceral with startling suddenness, tipping the situation over into inexorable and perhaps inescapable terror. With a modest budget and scope, Brown nonetheless elicits a sense of engulfing biological apocalypse, and he and cinematographer Owen Levelle make effective use of fog and lighting to create a world gone out of control. (The visuals occasionally recall the way Richard Stanley and his team evoke cosmic powers on a small scale in COLOR OUT OF SPACE.) At the same time, there’s just enough showcase given to the truly icky makeup effects by Jennifer Suarez, prosthetics by Peter Gerner and Brian Spears (DEPRAVED) and squirmy organisms created by Paul Rice and Andrew Benepe. It’s all tied together by Roly Porter’s unearthly score, which, like the rest of THE BEACH HOUSE, doesn’t strain for effect and draws us into an ordinary setting that goes frighteningly extraordinary.