ANNIHILATION already has and no doubt will continue to win comparisons to Stanley Kubrick’s 2001: A SPACE ODYSSEY, sending audiences out with its trippy, reality-bending finale dancing in their heads. Alex Garland’s adaptation of Jeff VanderMeer’s novel also calls to mind ALIEN, in that it applies superlative craftsmanship to what is essentially a basic science-fiction story.

There’s also a great deal of thematic ambition behind ANNIHILATION, whose skeleton is the time-honored scenario of a group of specialists/soldiers venturing into a mysterious realm to find out what happened to a previous team, and encountering assorted nasties therein. It’s also part of the subset of such movies in which the territory they enter messes with the group’s heads. From this simple premise (and freely diverging from the specifics of VanderMeer’s book), Garland spins a hypnotic and occasionally bone-chilling saga that begins with biologist/professor Lena (Natalie Portman) still grieving the loss of her soldier husband, who has been missing and presumed dead for a year. Then Kane (Oscar Isaac) suddenly reappears, not at all well in mind or body, and in short order the two are forcibly spirited to “Area X,” a secretive government compound set up outside a region of Florida swampland that has been overwhelmed by a mysterious phenomenon called “The Shimmer.” 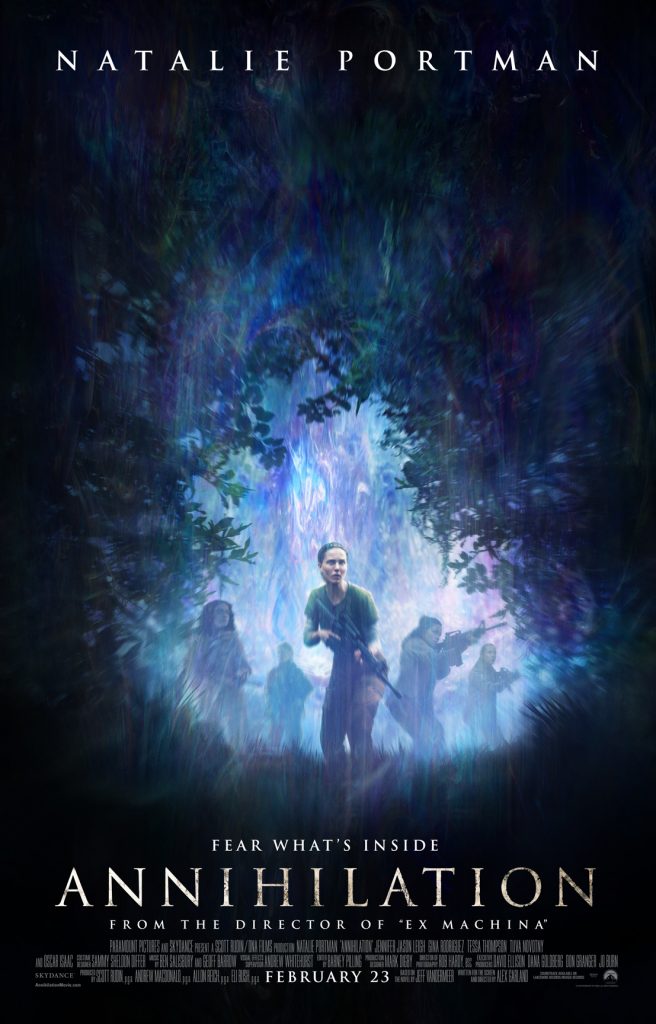 Like many things in ANNIHILATION, the Shimmer is both eye-catching and threatening—a sort of iridescent curtain through which Lena ventures as part of a new expedition to find out what happened there to Kane and his otherwise still-absent squad. She joins psychologist and team leader Dr. Ventress (Jennifer Jason Leigh), paramedic Anya Thorensen (Gina Rodriguez), physicist Josie Radek (Tessa Thompson) and anthropologist Cass Shepherd (Tuva Novotny) on the mission, which quickly puts them through a time hiccup and then confronts them with altered animal life that’s harder to kill than usual. These scientists also have military training (though Lena keeps her own background in the Army a secret from the others), which becomes less and less advantageous the deeper they trek into the Shimmer, discovering unnerving clues about its nature and what became of Kane’s cohorts.

ANNIHILATION is two parts mindfreak sci-fi and one part monstrous and grisly scare show, particularly a lengthy scene of terrorization by one of those mutated fauna that stands among the best sustained horror setpieces in recent memory. Garland successfully integrates such visceral gut-punches into his overall cerebral approach, as he drops hints for both the heroines and the audience about the Shimmer’s m.o. while its influence starts to creep into the women’s psyches. The characterizations aren’t especially deep at the start; as in John Carpenter’s THE THING, these people are defined by how they react to their intense, dangerous, psychologically tantalizing situation, as reality starts to slip away and the true peril they’re confronting becomes clear.

Forceful performances by Rodriguez, Thompson and Novotny, Leigh’s more resigned and restrained but still fully felt turn and Portman’s combination of resolve and vulnerability maintain the human interest amidst the gallery of cinematic wonders Garland and his production team have wrought. ANNIHILATION is an absolutely ravising visual experience, often darkly so, as cinematographer Rob Hardy frequently backlights the protagonists so that their faces are only dimly visible—an indicator that their very humanity is up for grabs. Elsewhere, he uses the widescreen frame to fully and colorfully capture the environments conjured by production designer Mark Digby and visual effects supervisor Andrew Whitehurst, which blend the natural and the unnatural to striking effect.

Garland eventually reveals enough about the Shimmer for us to grasp what it has done to the humans brave/foolish enough to step inside it—and then takes us several steps beyond. ANNIHILATION’s last act, played largely without dialogue, raises more questions and teases us about the answers, while offering up a mesmerizing series of strange and unnerving images. There are, in the end, a number of heavy themes at play in the film, but what they are won’t be suggested here, because different viewers will take different things away from it. This makes ANNIHILATION one of those welcome science fiction films that equally addresses and satisfies both the hardcore and speculative sides of the genre.