Michael Gingold’s Best Horror Films of 2019—and The Decade

The last year of the 2010s has come to a close, and it was a very strong one in the horror field. Established talents turned out great work, newcomers impressed with unique takes on the form, and below are my choices for the very best of the past 12 months—and my list of the top 10 from the entire 2010s.

As always, the following titles are movies that received commercial release in 2019; a bunch of my fest faves opening in the coming months (COME TO DADDY, AFTER MIDNIGHT, EXTRA ORDINARY, etc.) will no doubt be on next year’s list. This lineup is topped by a pair of films that are very different in subject matter, tone and approach; what they have in common is that I found them so extraordinary that they place in my best of the decade as well…

DOCTOR SLEEP: Adapting Stephen King’s THE SHINING sequel, writer/director Mike Flanagan proves once again that he has “the shine”: the ability to tap deep, moving emotion via full, rich characters even as he’s frightening us. This one’s gonna endure. (Review)

ONE CUT OF THE DEAD: Real zombies attack a zombie-movie crew! And it’s all filmed in one take! It sounds gimmicky, but Shinichiro Ueda’s satire of the undead and indie filmmaking is surprising, inventive and fall-down hilarious from first frame to last. (Review)

The rest, in alphabetical order:

DEPRAVED: Larry Fessenden finally got the FRANKENSTEIN variation—told from the point of view of the confused, troubled “monster”—he’d been developing for a decade to the screen this past year. And the engrossing, multifaceted, often chilling result was worth the wait. (Review)

THE LIGHTHOUSE: Encoring from THE WITCH, Robert Eggers delivers another period piece with a very different emphasis: a galvanizing two-hander about two men (a never-better Willem Dafoe and Robert Pattinson) descending into madness together at the remote titular location. (Review) 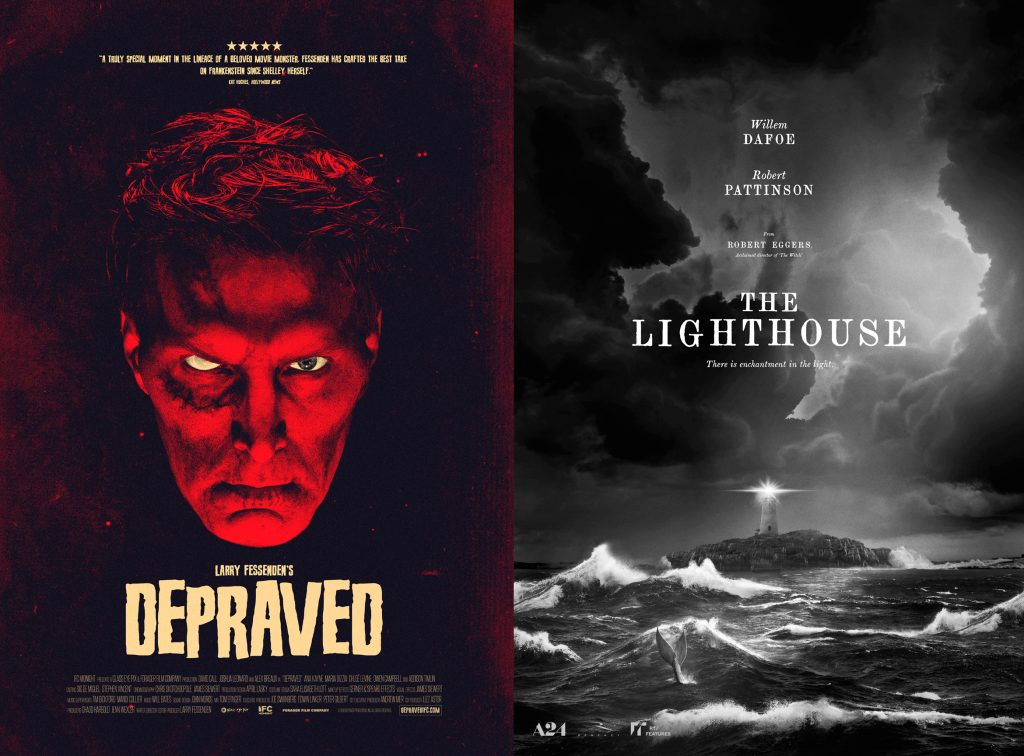 LUZ: The film-school thesis project of young German auteur Tilman Singer immediately bumped him to the head of the international genre class, as his study of a disturbed young woman’s hypnosis treatment is a master class in lo-fi, experimental style. (Review)

MIDSOMMAR: Like Eggers, HEREDITARY’s Ari Aster ably beat the sophomore jinx with his second feature, delving this time into folk horror and taking us to a very strange and unnerving commune, anchored by Florence Pugh’s standout turn as its most sensitive visitor. (Review) 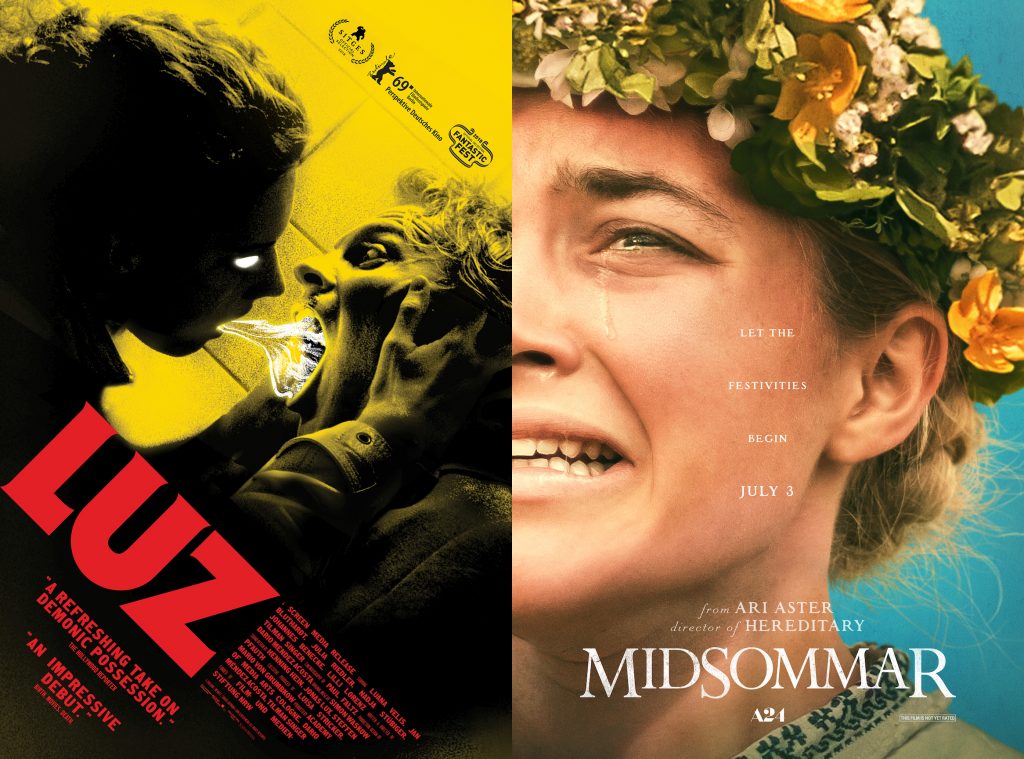 THE NIGHTSHIFTER: A man who sees dead people for a living (as a morgue worker) can communicate with them as well—and that’s far from the scariest part of Brazilian filmmaker Dennison Ramalho’s feature directorial debut, fully and creepily paying off the promise of his much-praised shorts. (Review)

THE PERFECTION: A bracing riposte to predictable formulas and a wickedly entertaining experience in its own right, Richard Shepard’s psychochiller keeps you in suspense simply—but not only—by having you wonder what batshit-insane turn it’s going to take next. (Reviewed in RM #188) 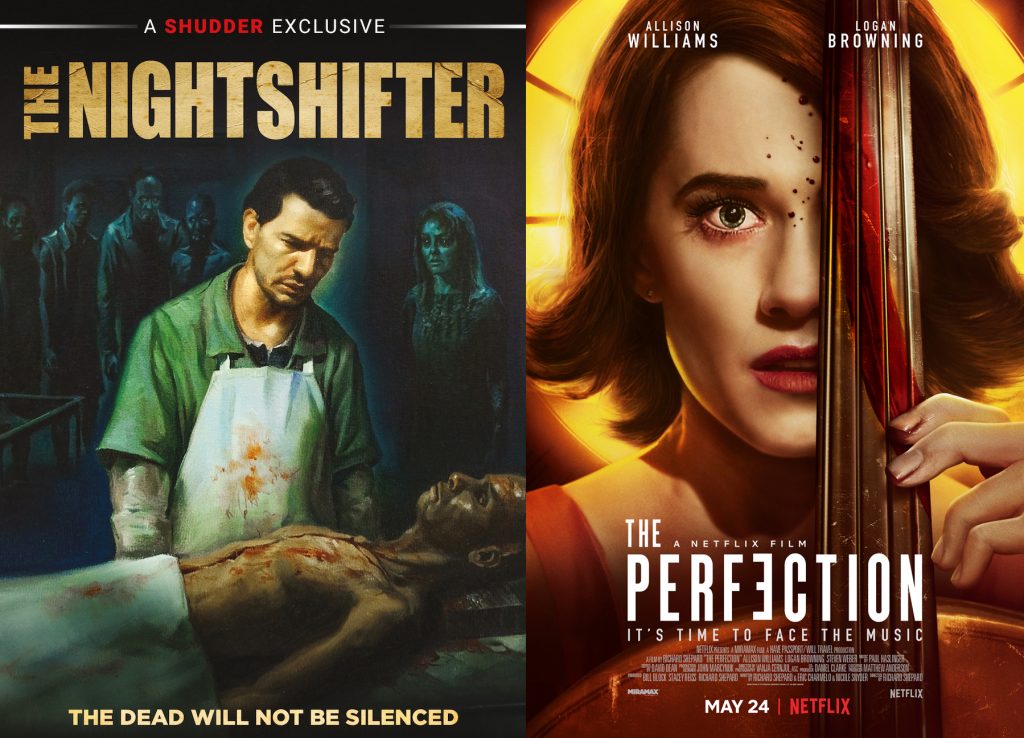 READY OR NOT: A sort of bloodier companion piece to KNIVES OUT, and just as much black-humored fun under the direction of Matt Bettinelli-Olpin and Tyler Gillett, with Samara Weaving confirming her genre MVP status as a young woman running from and fighting back against her deadly-game-playing potential in-laws. (Review)

US: One more second feature that lives up to the promise of its predecessor, as Jordan Peele follows GET OUT with another accomplished creepfest that also (albeit less directly) touches on social issues to underpin the frights, plus a striking lead performance by Lupita Nyong’o. (Review)

And now, my best of the 2010s, in alphabetical order. This was a truly tough list to narrow down; on another day, I might drop one or two of these out in favor of equally worthy movies, but right now, they feel to me like the very top of the heap.

THE AUTOPSY OF JANE DOE (2016): Whenever people ask me to recommend a really great, original horror film they should watch, I still tell them this one more than three years after André Øvredal’s truly harrowing morgue-set shocker first came out.

THE BABADOOK (2014): Horrifying and heartbreaking, Jennifer Kent’s remarkable first feature charts the struggle of a woman (the amazing Essie Davis) grappling with both a supernatural home invader and some very uncomfortable truths about motherhood.

THE CABIN IN THE WOODS (2012): Using the titular trope as a launch point, Drew Goddard and Joss Whedon get meta in the best possible way, delivering a wildly entertaining film that both encapsulates and subverts everything we love about horror.

HEREDITARY (2018): In another stunning debut, Ari Aster and a first-rate cast led by Toni Collette devastatingly explore how figurative ghosts haunt a family before the paranormal threatens to destroy them.

TRAIN TO BUSAN (2016): A bolt of cinematic lightning that rocketed out of South Korea to prove that someone—in this case Yeon Sang-ho—could still breathe exhilarating life into the overcrowded zombie genre.

WE ARE WHAT WE ARE (2013): Jim Mickle’s remake of Jorge Michel Grau’s Mexican cannibal-family saga sings its own song—of death, drama and tragedy, punctuated by frightening moments that are all the more upsetting because we care so much for the characters.

WHAT WE DO IN THE SHADOWS (2015): The decade’s most screamingly funny horror/comedy, Jemaine Clement and Taika Waititi’s film finds so many different ways to have fun with vampires while respecting their undying appeal.