Looking back over the movies of the past year, one thing became evident: The horror/supernatural genre has never been more fluid and malleable than in 2017. That made compiling a list of the best scare films an intriguing challenge.

It’s notable, for example, that my very favorite feature, David Lowery’s A GHOST STORY, uses a popular fright trope to instead tell a fascinating and deeply moving dramatic story. Two others I loved, Guillermo del Toro’s THE SHAPE OF WATER and Nacho Vigalondo’s COLOSSAL, are creature features that set out not to terrify you, but to examine unique and compelling relationships between women and unearthly beings. And a number of the movies that did make my list could be principally defined as dramatic thrillers, yet venture into truly scary and disturbing territory to the point where they can be assuredly categorized as horror.

There was so much good stuff that I just couldn’t narrow it down to 10 (and there were a few well-liked films I didn’t manage to catch, like CREEP 2, THE GIRL WITH ALL THE GIFTS and THELMA), so what follows is an alphabetical list of my favorite 13 of 2017:

BETTER WATCH OUT: You don’t have to watch at holiday time to enjoy Chris Peckover’s colorfully told tale of anti-Christmas cheer. It’s a gift that keeps on giving surprises, shocks and gruesome dark humor. (Review)

A DARK SONG: Steve Oram and Catherine Walker give gripping performances in Liam Gavin’s study of the lengths that a woman grieving her child’s death will go to find closure, and that a reluctant occultist will go to make that happen. (Review)

GERALD’S GAME: Begrudging IT none of its tremendous and deserved success, the best Stephen King adaptation last year was Mike Flanagan’s film version of the author’s “unadaptable” novel, skillfully dramatizing the physical plight and inner torment of its captive heroine, perfectly played by Carla Gugino. (Review)

GET OUT: What more can be said about this one, other than how gratifying it is to see Jordan Peele’s February release remembered and receiving so much attention during awards season? It’s proof that horror can be relevant, meaningful and still work as gangbusters entertainment. (Review)

HOUNDS OF LOVE: Taking cues from real cases, Australian filmmaker Ben Young zeroes in on a white-trash couple who subject an innocent teenager to a horrifying abduction and captivity, yet finds the humanity—diseased though it may be—in the criminals as well as their victim. (Review)

IT COMES AT NIGHT: The true horror of Trey Edward Shults’ film is that, despite the title (and the trailer that unfortunately led some to expect a more traditional evil-in-the-woods flick), the threat arrives not from outside but from within. Shults’ examination of a family shutting themselves off from a plague-ravaged world is a master class in building tension through both character and craft.

THE KILLING OF A SACRED DEER: A doctor (Colin Farrell) becomes embroiled in a sick situation he cannot cure in Yorgos Lanthimos’ galvanizing study of guilt and responsibility, which is also deeply disturbing and unnerving. Young actor Barry Keoghan creates one of the screen’s all-time memorable twisted teens.

MAYHEM: Every list like this should have at least one balls-out, over-the-top killfest on it, and Joe Lynch fills the bill with a movie that delivers corporate carnage, set in an office tower beset by a violence-causing virus, with zest and a couple of likably driven protagonists. (Review) 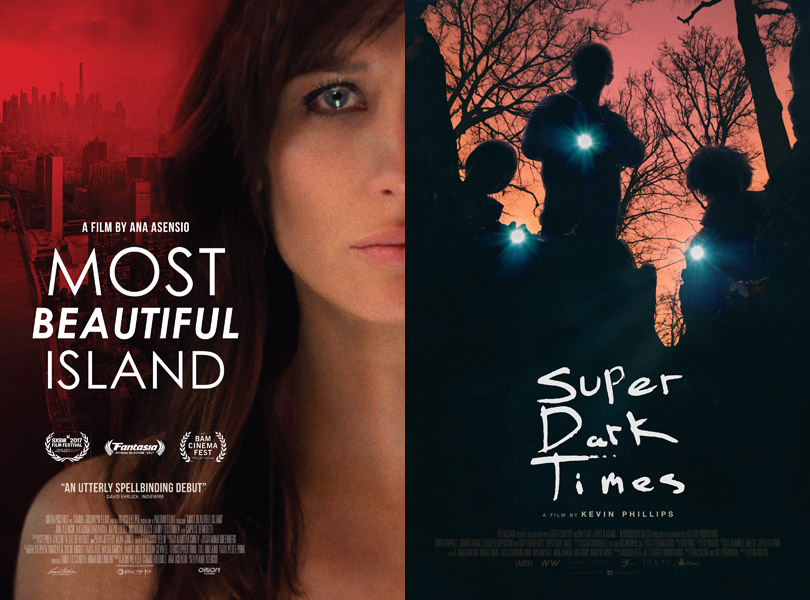 MOST BEAUTIFUL ISLAND: Things are distressing enough for an undocumented immigrant (played by writer/director Ana Asensio) struggling to make ends meet in New York City—until she takes a mysterious job that sends her and the movie down a frightening urban rabbit hole in the second half. (Review)

mother!: Love it (as I did) or hate it (as many others did), you have to give Darren Aronofsky credit for making a film that spurred both fervent appreciation and equally passionate outrage. His domestic nightmare may captivate you, or it may piss you off, but it won’t leave you unmoved. (Review)

SUPER DARK TIMES: Seamlessly blending themes of teen coming-of-age and tragedy and then spiralling deep into the dark side, Kevin Phillips’ suburban thriller is as insightful as it is chilling. It demonstrates the fragility and perils of youth with more potency than a dozen slasher flicks; if you haven’t seen it yet, try not to read any more about it before you do.

WITHOUT NAME: The most unfairly neglected film on this list, Lorcan Finnegan’s story of a surveyor’s increasingly hallucinatory experiences in an Irish forest is one to seek out and savor, full of creepy and mind-teasing moments. (Review)