The golden age of horror comics in the United States reigned from the late 1940s through the mid-50s, until these previously unregulated publications were tragically forced to self-censor by the Comics Code Authority. Now known as ‘Pre-Code’ comics, the most famous of which included EC Comics’ series Tales from the Crypt, these classic horror stories serve as the inspiration for the latest microbudget anthology from writer and director Mike T. Lyddon. WITCH TALES, also known by its Spanish title CUENTOS DE LA BRUJA, was shot and reshot in its entirety in both English and Spanish for an astounding $9,300.

Produced during Lyddon’s two year stay in Peru, with a cast of local actors of both the amateur and professional variety, WITCH TALES brings three spooky Pre-Code comic stories to life, with a delightful cartoonishness and plenty of practical gore. While the film’s miniscule budget limits its production value considerably, there is still a great deal of enjoyment to be had with its dark humor and each segment’s well executed twist ending. As described by Lyddon in correspondence with Rue Morgue, several of the horror stories adapted for WITCH TALES originated from writings of Pre-Code comic legend Ruth Roche (see image below). As one of the few women working in horror comics in the 40s and 50s, her contributions to horror comic classics such as Voodoo are central to the legacy that Pre-Code comics still hold today. 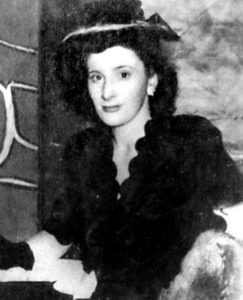 In the vein of famed anthology Creepshow, WITCH TALES’ three core stories are framed by a comic book-style host known only as “The Witch,” played by the charismatic Peruvian television star, Mayella Lloclla. As she gathers ingredients for spell to be cast on Halloween night, The Witch guides the audience through three predictable (yet satisfying) horror shorts: “Cycle of Horror,” “Experiment in Terror,’ and “Bon Appétit.” Featuring stunning visual effects, all three segments make use of stark colorful lighting, creative camera angles, and are engaging and theatrical, despite their occasional flat-falling performances.

Released in both English and Spanish, WITCH TALES was essentially shot twice, with every scene being replicated in the other language immediately after the initial recording. Not only is this feat impressive simply given the film’s budget, but as a result WITCH TALES also features an entirely bilingual cast. By not only making WITCH TALES accessible, but also wholly available, to both English and Spanish speaking audiences is an ability few other films and filmmakers can boast. While I personally only saw the English language version, I recommend that Rue Morgue readers check out CUENTOS DE LA BRUJA as well, wherein this film’s Peruvian origins are really given the opportunity to shine. 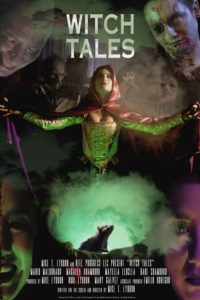 WITCH TALES is currently available to rent and buy on Vimeo, however, by purchasing one of 300 limited edition Blu-rays, you’ll also have a chance to win props and costumes from the set by answering horror trivia! With ten props available and only 300 possible entries, your chances of winning are a spectacular 1:30. The Blu-ray of WITCH TALES is on sale now, and the contest will conclude a week after all 300 copies have been sold. (See Links Below)

With appropriate expectations for a very low-budget film, WITCH TALES is an enjoyable romp through Pre-Code horror comic history. Particularly because of its use of hyper-gory practical effects, “Cycle of Horror” is a standout segment. The second two stories save their scares for the big ending, but the payoff is usually worth the wait. If only to lend your support to an extremely dedicated indie filmmaker and production studio, check out WITCH TALES now, and try your hand at winning a piece of the movie magic while you’re at it.