Knoxville’s Inaugural FRANKENCON Brings Horror to East Tennessee in May

When podcasters Matt Henry, Richard Ewell, and Cory Keelen hosted a sell-out screening of Sleepaway Camp with Felissa Rose, they realized they were onto something. Launching Madcap Three Entertainment, they put the wheels in motion for their first horror convention. On Saturday, May 14th, 2022, the inaugural FRANKENCON will pack the Hilton’s Knoxville Airport hotel in Alcoa, Tennessee, with fans anxious to meet their horror heroes. Headlined by a Nightmare On Elm Street 2 reunion with co-stars Mark Patton, Kim Myers, and director Jack Sholder; an appearance by Joe Bob Briggs and Darcy the Mail Girl; and flanked by indie auteurs, including Nigel Bach, the friends have pulled out all the stops to ensure that their opening salvo into the world of horror conventions will be loud and satisfying. The group sat down with Rue Morgue to discuss the down-and-dirty of FRANKENCON’s inception.

Putting together a horror convention seems like a daunting undertaking. Discuss your individual backgrounds and how, collectively, you created the idea of FRANKENCON.

Richard Ewell: We’re podcasters, that’s the short answer. Cory is a part of Spooky Dudes podcast and me and Matt have our own called Night of the Nerdy Laser. Cory and I became friends a few years ago because of podcasting, and me and Matt live close to one another.

Matt Henry: I did about 14 years of booking wrestling shows, which is completely different than conventions, but I do have a background in organizing events. These guys have been going to conventions forever, and although I had no experience with them, I did have some experience in booking talent.

Cory Keelen: Back in 2002-2003, I started making replica Friday the 13th hockey masks. I was working at Walmart and selling masks on the side to make a little extra money, and I was a big part of a mask collecting community. That led to flying up to New Jersey to go to Monster-Mania, which is an amazing show. I’ve been going to conventions ever since 2005 and then started podcasting in 2013. At this point, it seems like everything horror-related that I’ve ever been into has been a community effort, and that’s so much better than just sitting around watching movies.

At what point did you guys recognize that your idea could manifest into a living, breathing, horror con?

MH: Personally speaking, doing events for 14 years and then retiring [from professional wrestling], my mind could not get away from that. It’s a passion that I have. I love organizing events and horror has been a love of mine since I can remember, so coming together with Richard and then Richard pulling in Cory, it all kind of fell into place.

RE: When we were just doing our podcast, we held an event with Felissa Rose. I think we sold about 80 tickets as well as some VIP seats, and we sold out within about two weeks. That was for just one celebrity and a screening. Word was getting around, and I felt this town and some of the surrounding cities showed their hunger for something like this. I don’t think any one of us could have done this by ourselves, but the three of us together knew what it would take to run a show.

CK: If you do podcasts and go to cons, you talk about a lot of these things that never happen. I woke up one day to a Facebook message from Richard, and it said they were thinking about doing this thing and wanted to know if Spooky Dudes wanted to get involved. I looked over it, they told me about the particulars and everything, and I looked over at my wife, who knew Felissa Rose from the original Joe Bob Briggs’ The Last Drive-In marathon when they showed Sleepaway Camp. I told her all about it. She said, “Yeah, let’s do it!” Once we got there and started chatting with some of these people that drove in from two and three hours away, I realized that these people are my people and this is exactly why I drive two or three hours. FRANKENCON was a natural progression after that. 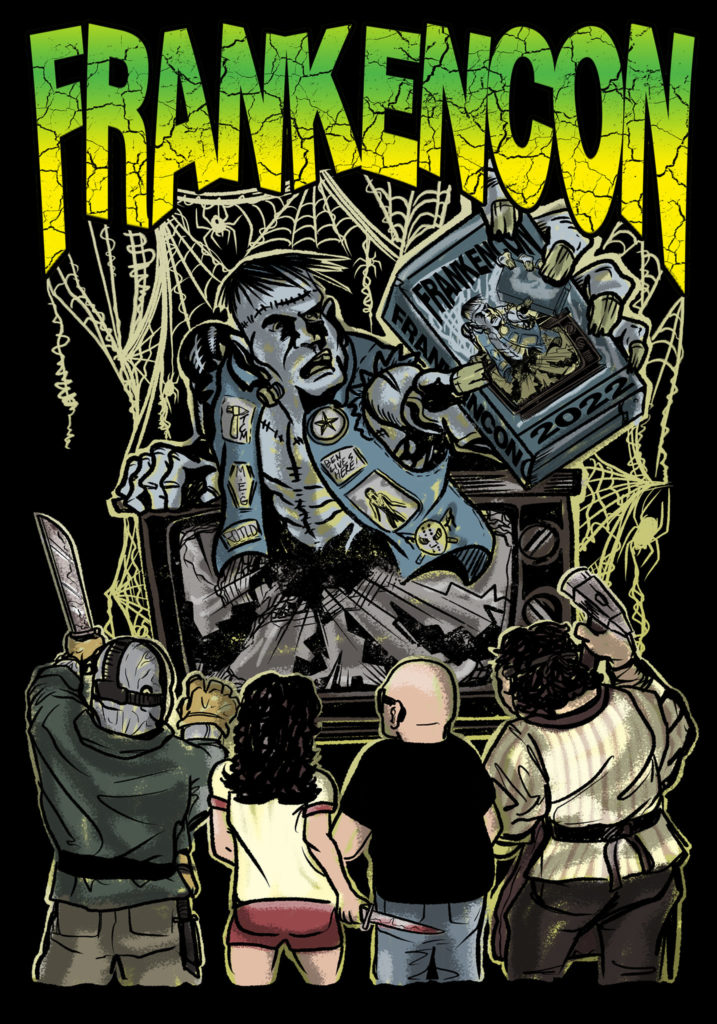 Best laid plans are certain to hit a few snags along the way. Guest cancellations are an unfortunate reality that even the most seasoned convention organizers encounter. How did you overcome that?

RE: We started selling tickets on September 1st, 2021. Some people said that was too early, but in the long run, it couldn’t have worked out better. We had three guests cancel, so we sort of took it on the chin, but we wanted to do a good news-bad news scenario. We didn’t want to just say these people canceled, so we got in touch with an amazing agent who helped us put something together that I think made people happy. It’s a disappointment for some, I’m sure, but cancellations are a part of it.

MH: We’re only running a one-day convention and we have X amount of talent. We had to adjust very quickly and that’s where Mark Patton came in as well as Kim Myers and Jack Sholder. We were able to pivot from what was, in our eyes, catastrophic, but to maybe other conventions was par for the course.

Is there anyone outside of your circle that has served as a mentor or is helping you bring this whole thing together?

CK: There’s someone that works for [Kentucky-based] Scarefest who has been a positive light and has talked us through some of this stuff. She’s been very helpful, and that whole organization is full of good people. I can’t shout them out enough.

MH: The same goes for Smoky Mountain Fan Fest. They’re about an hour from our event, and we were a part of their show last year, where we had a table and were promoting. They’ve stepped in and talked with us a lot.

CK: By and large, the convention community is pretty cool. Most want to see other conventions succeed.

Is your guest roster the one you’d envisioned it to be right from the start, or did it evolve over time?

RE: The short answer is that this is exactly who we wanted; The longer answer is you always want more. You can’t reach out to just one guest and depend on them to work out. Of course, we reached out to other people, and some of them may appear at a future event. In some cases, this show wasn’t feasible for them, especially with it being only one day. Horror in general is this dirty, grungy thing we all love to celebrate, and we wanted to have cool people from the things we loved. People like Nigel Bach from the Bad Ben franchise. Cory introduced him to me. He’s an indie filmmaker who made nine films in a franchise that he started with only $300. We want to spotlight people like that.

Who are your dream guests?

MH: I think Richard and I both share a sentiment of bringing in Frank Henenlotter and Kevin Van Hentenryck from the Basket Case films and maybe even doing something with the basket!

RE: That’s something we’d like to do – celebrate these movies that weren’t necessarily big blockbusters, but we love them. I don’t know if I’ve ever told the guys this, but because we’re starting off with Nightmare on Elm Street 2 and there are so many people we want from that franchise, Robert Englund has to be the one for me.

CK: I’m going to cheat here – I’m doing a triple because I’d love to have Linnea Quigley, Michelle Bauer, and Brinke Stevens come together. I think you get the three stars from Sorority Babes in the Slimeball Bowl-O-Rama and Nightmare Sisters, and that’s it for me. Those are the kinds of movies I really get into, the grindhouse niche.

Talk a little about your film fest. Any special entries that deserve a call-out?

MH: It’s been difficult because we’re asking people to create something that’s only six minutes or shorter, and it needs to be inspired by Frankenstein. We’ve had a few entries, and we’ve had people contact us, but it’s probably one of those things that will evolve. I want to give a shout-out to [Knoxville’s] Central Cinema because those guys host a successful Knoxville Horror Film Fest down here, and they’re sponsoring our screening of Nightmare 2 with a live commentary. 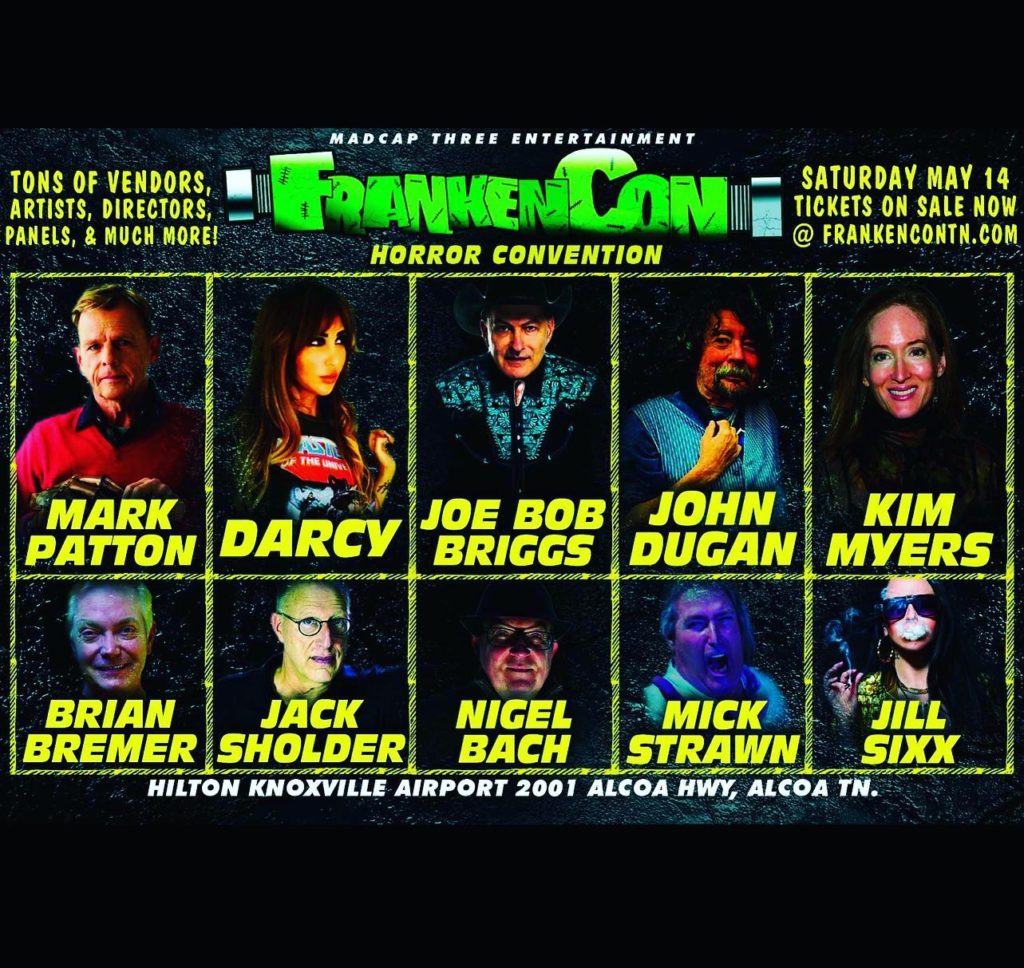 The first event is on the horizon and will soon be in the books. After that, what’s next?

MH: I think when we came into this we were just trying to do something different and unique. For example, having stars come in and do commentaries for the movies that they’re in; You don’t see that a lot. We’re having John Dugan [from The Texas Chain Saw Massacre] do a panel where he’s going to break down the dinner scene while we all watch. Growing up, one of the things I loved was getting these films, and Joe Bob Briggs would have a commentary track on them, so you could watch I Spit on Your Grave or something along with Joe Bob commentary. That’s the kind of thing that I want to do as it pertains to our activities, and then also to see it grow to multiple days and try to delve more into the cult aspect of horror.

RE: Multiple days, for sure. We’ve already started brainstorming for 2023, and multiple days will happen next year, whether that be two or three. One of the other things for me is that I want to establish a community. Cory’s big into that – building a fan base. I want for us to have that community and have fans that know they can trust us to put on the best show possible.

MH: Our already small little fanbase is calling themselves the Franken family!

CK: We’re working hard and having a lot of fun, but there’s got to be a balance. If this isn’t fun, there’s no purpose in doing it because this is a long game for us; Nobody is getting rich off doing conventions in the first couple of years. One thing we kept talking about since we started was that we wanted to keep some sort of niche. We wanted to skew towards independent cinema, which is important because that stuff doesn’t get highlighted in the mainstream at all. It’s the film festival and convention people that pay attention to it. For me, five years from now, the con would be a little larger but still with the same goals and motivations of promoting a healthy environment for our Franken family but also for the celebrities, vendors, and artists. We’d love for them to come out and know they’re going to have a lot of fun and make some money. Everybody walks away happy, and that’s a success.

For more information about FRANKENCON, head over to their website.