It’s every indie filmmaker’s dream: a crowdfunded, fan-driven film with no studio backing gets a limited theatrical release and grosses approximately 2.5 million. People are packing into cars and driving for hours to see the film once, twice, or even three times. It knocked movies like Top Gun: Maverick out of the box office Top 10 in its first weekend. All of this amid reports of audience members walking out and theatres calling ambulances for fainting and vomiting patrons. What’s going on here? What’s going on is that horror fans are finally taking back the genre that they love. Horror has become fun again, and people are showing up in droves—ready to party like it’s 1989.

Rue Morgue recently had the opportunity to sit down with Damien Leone, writer/director/mastermind of TERRIFIER 2, and get a behind-the-scenes look at this history-making film. 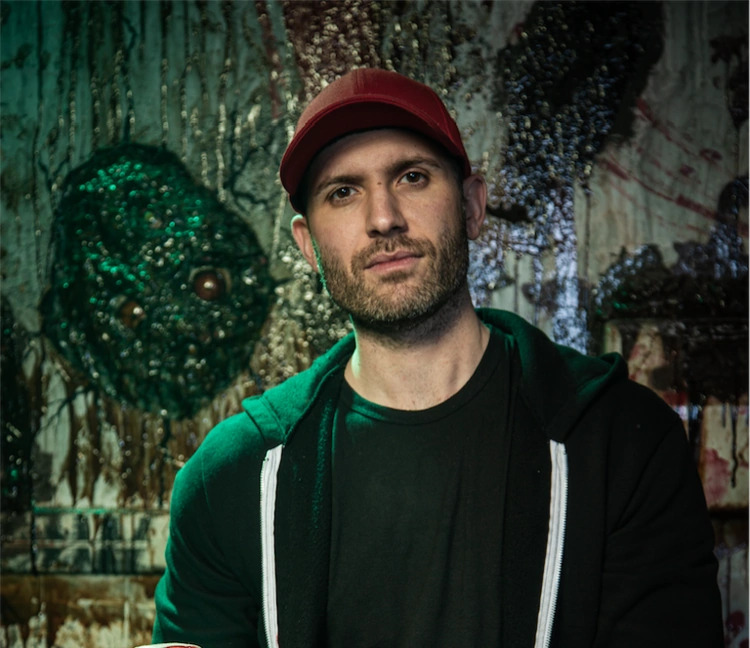 First off, congratulations on TERRIFIER 2! It’s been a while since the original was released, and fans have been clamoring for the sequel to come out. What are you most excited for the fans to see in TERRIFIER 2?

Honestly, I’m most excited for people to meet the character of Sienna who’s the protagonist of TERRIFIER 2. She’s my favorite character that I’ve ever written, and one I’ve been living with in my head for about 12 years. I’ve always wanted to create a badass final girl, but one who is also very grounded in reality and vulnerable. Lauren LaVera’s performance is truly remarkable and I believe she will stick with people long after the movie’s over.

Tell me a bit about the writing process. How long did it take you to complete the script?

This was the first time in my life I got to do nothing but write a script. Usually, I’m writing in between one or more day jobs, but it was a relief to finally be able to focus on nothing but writing. I would say it took about 3 months to complete and, typically, I found myself writing between 7 pm – 5 am since I’m a night owl and a terrible procrastinator. The story came to me very quickly since I already had most of the pieces floating around in my head, so it was just a matter of fine-tuning and revising which is essential.

Let’s go back a bit to when you made The 9th Circle. How did you come up with Art the Clown’s overall look? Did elements of his costume and makeup come to you in bits and pieces over time, or did you already have the fully realized vision in your head?

Once I made the decision to go all in with my take on a killer clown, I knew Art couldn’t look or act anything like Tim Curry’s Pennywise who was and arguably still is the king of all on-screen killer clowns. So, immediately I knew Art wasn’t going to be colorful, he wasn’t going to speak, and he wasn’t going to have hair. I was also influenced a little by the look of a clown in this Twilight Zone episode called “Five Characters in Search of an Exit.” Also, when it came time to sculpt Art’s face, I thought it would be effective to give him these sort of classic devil or witchy facial features like a pointed nose and chin. Originally Art’s facial features were more subtle but when I revised the makeup again for my next short film Terrifier (2011), I decided to make them more exaggerated and even sculpted him to look more gaunt and zombie-like with the big cheekbones and sunken eye sockets.

You often talk about how you grew up going to the video store and renting a lot of horror movies at a young age. What is one horror movie that you love but think not enough people have seen?

One of my favorite films of all time that remains pretty obscure is called Class of 1984. It’s not technically a horror film, but it’s brutal and has straight-up horror elements baked into it. It’s the classic “new teacher comes to a bad school” subgenre, but this is definitely the most hardcore of its kind and it’s a true early 80s grindhouse exploitation film that’s loaded with amazing set pieces. It’s also one of the best revenge flicks and features one of the most memorable scenes where the legendary Roddy McDowall loses his mind and teaches his class at gunpoint.

The first Terrifier had a running time of 86 minutes, but TERRIFIER 2 is a whopping 138 minutes! What’s different this time around? What can fans expect to see in that extra time?

I never thought about running time when I was writing the script for TERRIFIER 2. This was just the story that organically flowed out of my mind. Typically, a slasher film is padded with filler, even the original Terrifier. Many times you find yourself just filling time in order to get from one kill scene to another. This wasn’t the case in TERRIFIER 2. I genuinely wanted to tell a compelling story with dynamic characters this time around. It was crucial when structuring this film that, aside from the obligatory kill scenes, every scene needed to either propel the story forward, introduce a new character, introduce a new piece of information or raise the stakes. Hopefully, the longer run time allows the audience to feel a much deeper connection with our main characters as they enter the film’s climax.

Did you do all the practical special effects yourself like you did for the first film, or did you bring in other makeup artists?

Although for the first time in my career I wanted to bring in another makeup team to take at least 40% of the effects off my plate, I still wound up doing 97% of them with the assistance of my producer Phil Falcone. I also have to give a shout-out to Jackie Hughes and Alana Rose who assisted us with some make-ups, mold work, and painting. The main reason TERRIFIER 2 took years to shoot, however, was because Phil and I had to create virtually everything (including props) ourselves. If you’ve seen the film, you know just how many effects are involved and how ambitious that is for virtually two people to pull off.

We see some new characters in the trailer for TERRIFIER 2, including Sienna. What can you tell us about her?

As I said earlier, Sienna’s the heart and soul of this film and my love letter to characters like Ripley, Laurie Strode, and Red Sonja. She’s Art’s counterpart in this universe and her discovery of that destiny was what really excited me about this film. Not only is Sienna very maternal and selfless but she also has a lot of angst and mental instability. It was interesting to see a character so unsure of herself, transcend into this divine warrior over the course of the film. It’s not something you typically see in a slasher film.

Felissa Rose also makes an appearance in the film. What was it like working with a horror icon like her?

An absolute thrill! David Howard Thornton and I met Felissa at a horror convention one day and we all hit it off instantly. She’s one of the sweetest, most genuine people you will ever meet. The moment you meet her, you feel like you’ve known her your whole life. Needless to say, we both wanted to work with her and being fans of Sleepaway Camp, it was an honor that she agreed to play a role in TERRIFIER 2. Unfortunately, she was only on set for one day but it was one of the most fun days we had during the entire shoot. Her energy is infectious and there was a lot of laughing on set. “What’s going on?!”

I’m guessing that Art isn’t finished his gory path of terror. Do you think there will be a third installment? Even a fourth?

There is so much more to explore with Art and so many wonderful scenarios that I need to see him in. I can imagine one or two more films with him before the well runs dry and things start becoming very redundant.

What’s next for you? Any upcoming projects outside of the Terrifier universe on the horizon?

Depending on the success of TERRIFIER 2 we could jump right into part 3 if there is a demand. I also wouldn’t mind if Hollywood came knocking on my door and offered me a chance to direct the Friday the 13th reboot! That would be a dream come true. Aside from those, I have this original Romero-esque zombie epic that I’d love to make starring Sylvester Stallone but who knows? We’ll see where the tide takes me.

You made the first Terrifier on an outrageously low budget, a fair share of ups and downs, and a ton of perseverance. What advice would you give to young filmmakers who have a project they believe in but the road to getting it made is difficult?

Believe in yourself, follow your dream, persistence is key, and never give up. I created Art the Clown way back in 2006. He was by no means an overnight success. I truly believed I had something with this character and I kept going and going until he hit but even if he didn’t, I’d move on to the next project. I was pressured by many for years to quit being a filmmaker and to “get a real job,” but you can’t listen to the naysayers. If you believe in something enough and you keep honing your skills, you can accomplish anything.

TERRIFIER 2 is now in select theatres from Cinedigm in partnership with Iconic Events.