Having made a splash playing her first major role as Eleanor “Nell” Crain in Mike Flanagan’s The Haunting of Hill House, Victoria Pedretti has returned to take on a more challenging, central part in the follow-up, THE HAUNTING OF BLY MANOR, coming next month to Netflix. Pedretti stars as Dani Clayton (in homage to the director of 1961’s The Innocents, Jack Clayton), an American who takes a position as a governess to two precocious children (Amelie Bea Smith, Benjamin Evan Ainsworth) at the eponymous estate in the English countryside. But all is not as it seems at the manor, and, as centuries of dark secrets of love and loss bubble to the surface, Dani finds herself threatened by Bly’s strange power. Building upon the foundation laid by Henry James’ celebrated 1898 novella The Turn of the Screw with other stories from the author’s oeuvre (including The Jolly Corner and The Romance of Certain Old Clothes), Flanagan has conceived THE HAUNTING OF BLY MANOR as a Gothic Romance in the classical sense, refashioned for a 1980s setting. Rue Morgue sat down with Pedretti to discuss her burgeoning leading lady status, what it’s like sharing so much screen time with adolescent actors, and why BLY MANOR’s human core is so different from that of Hill House’s. 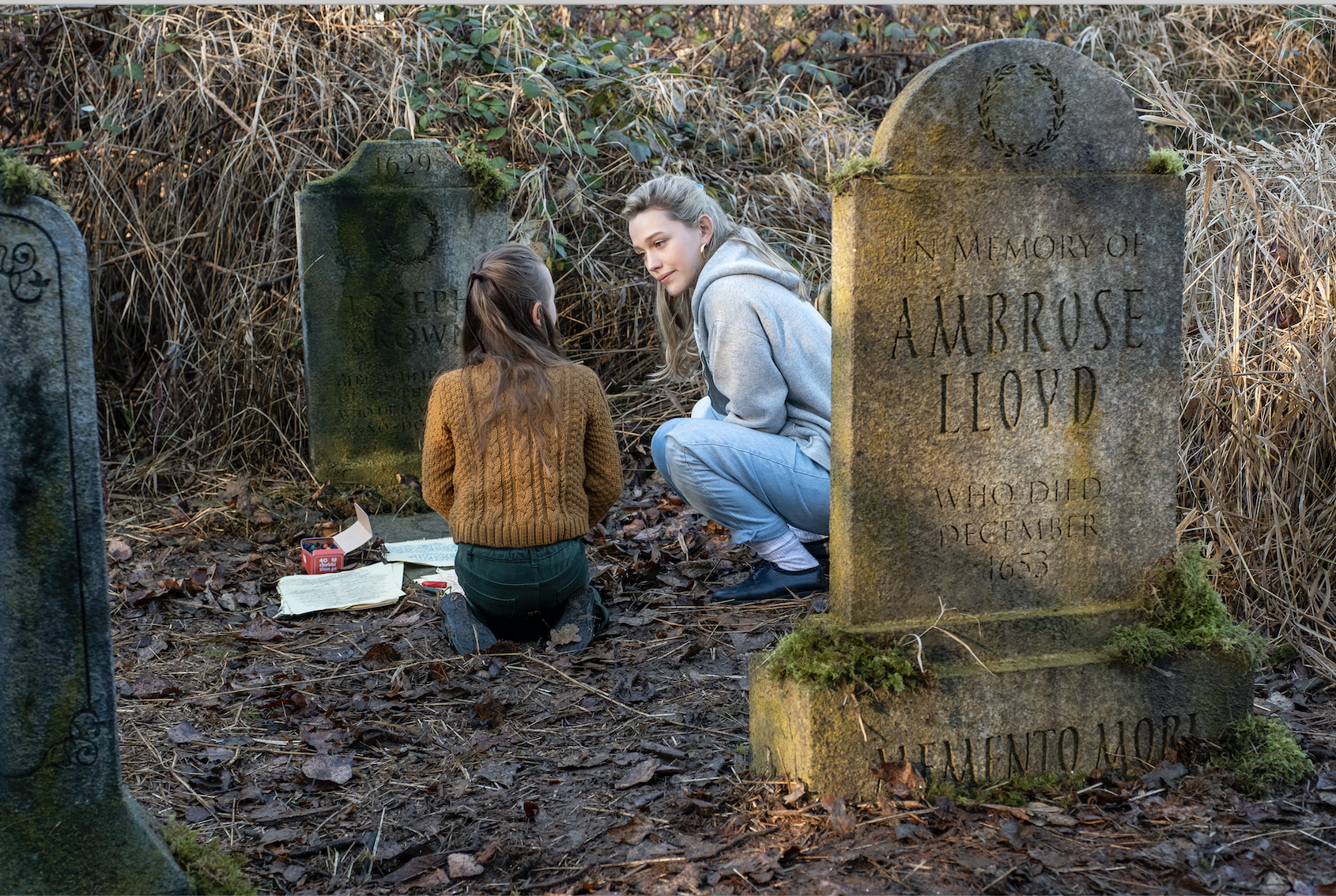 You’re definitely becoming something of a household name to horror fans. Is this the kind of work you’re naturally drawn to or is it just happenstance?

It’s a total coincidence. I grew up not liking horror at all. I just didn’t. I think I just wasn’t exposed to the right things. I also think I didn’t like tomatoes, but I never had a decent tomato. You know what I mean? [Laughs] It’s a total coincidence. There is something particularly interesting I think I’ve found in having to bring yourself to imagining things that don’t exist.

Do you believe in the paranormal?

Yeah, I’m an actor. I think I have to believe in magic and the paranormal, [and] have a strong imagination. Yeah, why not? 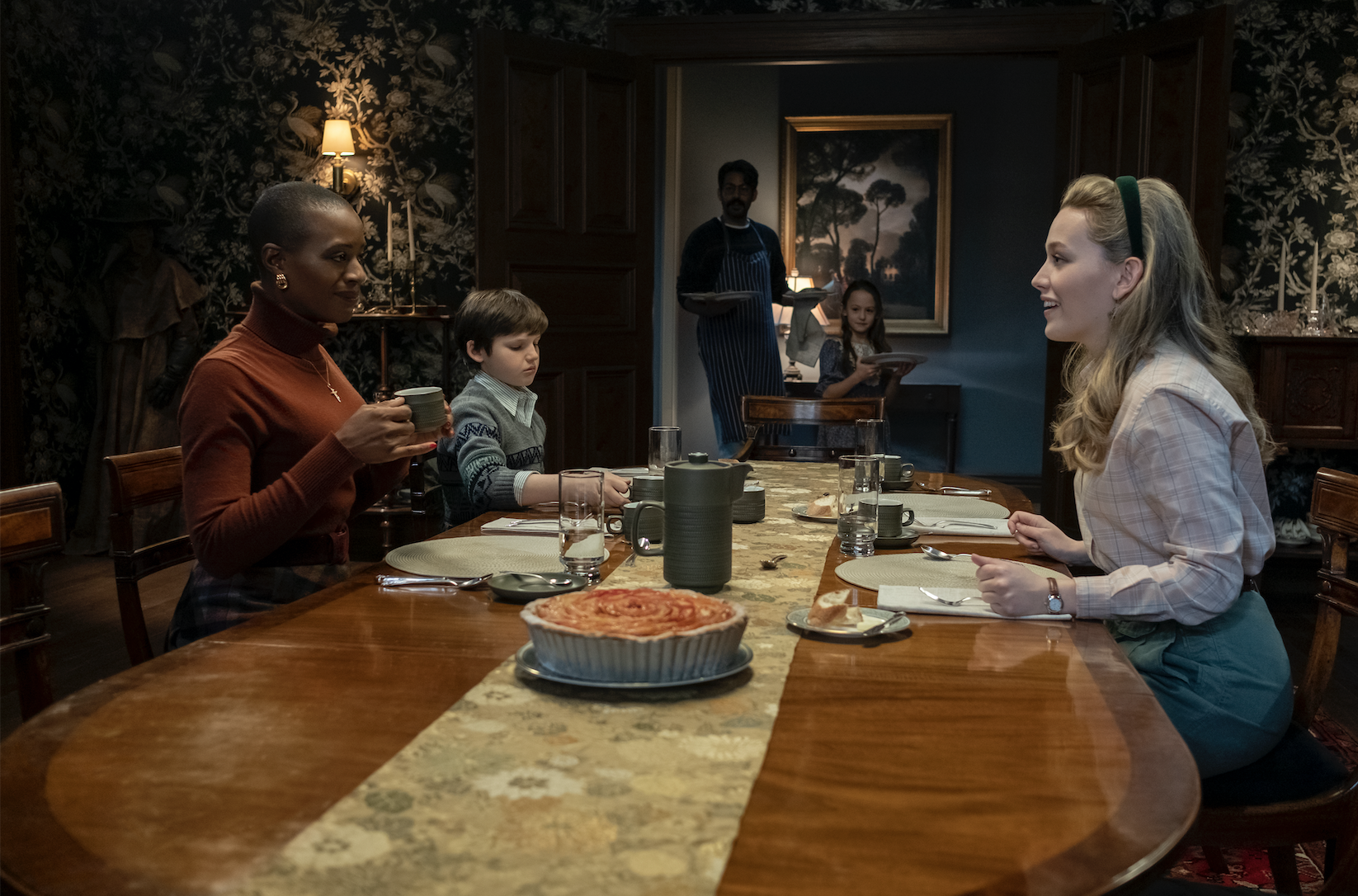 Your performance as Nell in Hill House was highly praised. What sort of challenges did your new role in BLY MANOR present in contrast to that one?

So many. Just in the case of acting stamina. I mean, I’m just so much more present in this season. This character, her arc is far more…it’s just longer. There’s so much more to play. She’s very presentational with the adults, not with the children. I think with the children, those scenes were easier because I was just able to talk to them. She walks around with this fear and this presentational attitude of this chipperness…I find that the most exhausting. It’s much more difficult to present yourself as more happy and pleasant than you are, I feel, than it is to pretend to be angry or sad when you’re in a good mood. It doesn’t make me sad to play sad if that makes sense. To present happy when I’m not feeling happy inside, it’s tiring.

The two characters couldn’t be more different. It’s a very impressive job, because, to be frank, I didn’t even recognize you when I started BLY MANOR.

That’s always been my dream. The actors that I look up to are the ones that disappear into their roles. I know I can do better. It’s a lifelong journey that I’m dedicating myself to. That means the world to me. They don’t even offer the opportunity to do that. Not everybody is so lucky. We absolutely should all have the opportunity as actors, if we want that, to be able to take risks and do things that are different from what we’ve done before.

Henry James’ The Turn of the Screw is a familiar story with many adaptations. As an actor, do you look to the novella or film versions in building this character, or do you try to avoid that outside influence?

I avoid it. I think it’s only confusing. I feel a character has to be singular to what the script is offering the story. I don’t want to try to mimic what other people have done. The essence of this show, while similar, much like Hill House, it’s a departure from the original by a lot. Even being set in the ’80s. There’s just so much that is different that I think [would] really just work against it to try to incorporate things for the sake of it instead of just telling this story.

“I’m an actor. I think I have to believe in magic and the paranormal…”

You obviously work really well with Mike Flanagan. Has that working relationship evolved over the course of these two seasons?

Yeah, definitely. Everything was just so different [on Hill House]. Considering this is between getting my first job to being my first big demanding role. Has our relationship changed? Yeah. I don’t know. I don’t want to speak for him, but it seems that he chose to trust me. He saw what I did on the first season. He was like, “I’m going to give this person more responsibility.” I was like, “I take that very seriously. I take that responsibility really seriously and I’m going to do what I can to rise to the occasion. This is a challenge.” It’s incredible to have somebody believe in you that much.

You share a lot of screen time with Benjamin Ainsworth and Amelie Smith. Was this your first time working with such young actors? What was that like?

How’s it working with children? I don’t know, but working with these children was awesome. [Laughs] I was not like they are as children. As a child, I was off the wall. You couldn’t pin me down. These kids are way more talented than I was, way more disciplined. It was a joy. Their parents also empowered them so much within the process of protecting them so well. I really loved it. I was a newbie on the last season. I had an appreciation to a certain extent of what it’s like to step into all of this and for it to be so foreign. I mean you’re in another country. They’re away from their siblings and their friends. They’re sacrificing that for the sake of being creatives and doing this really strange job that’s hard to understand. I’m supposed to look this way but I’m talking to this person. It’s a lot to wrap your head around. I enjoyed hopefully being able to help as much as I could. I liked serving that role. 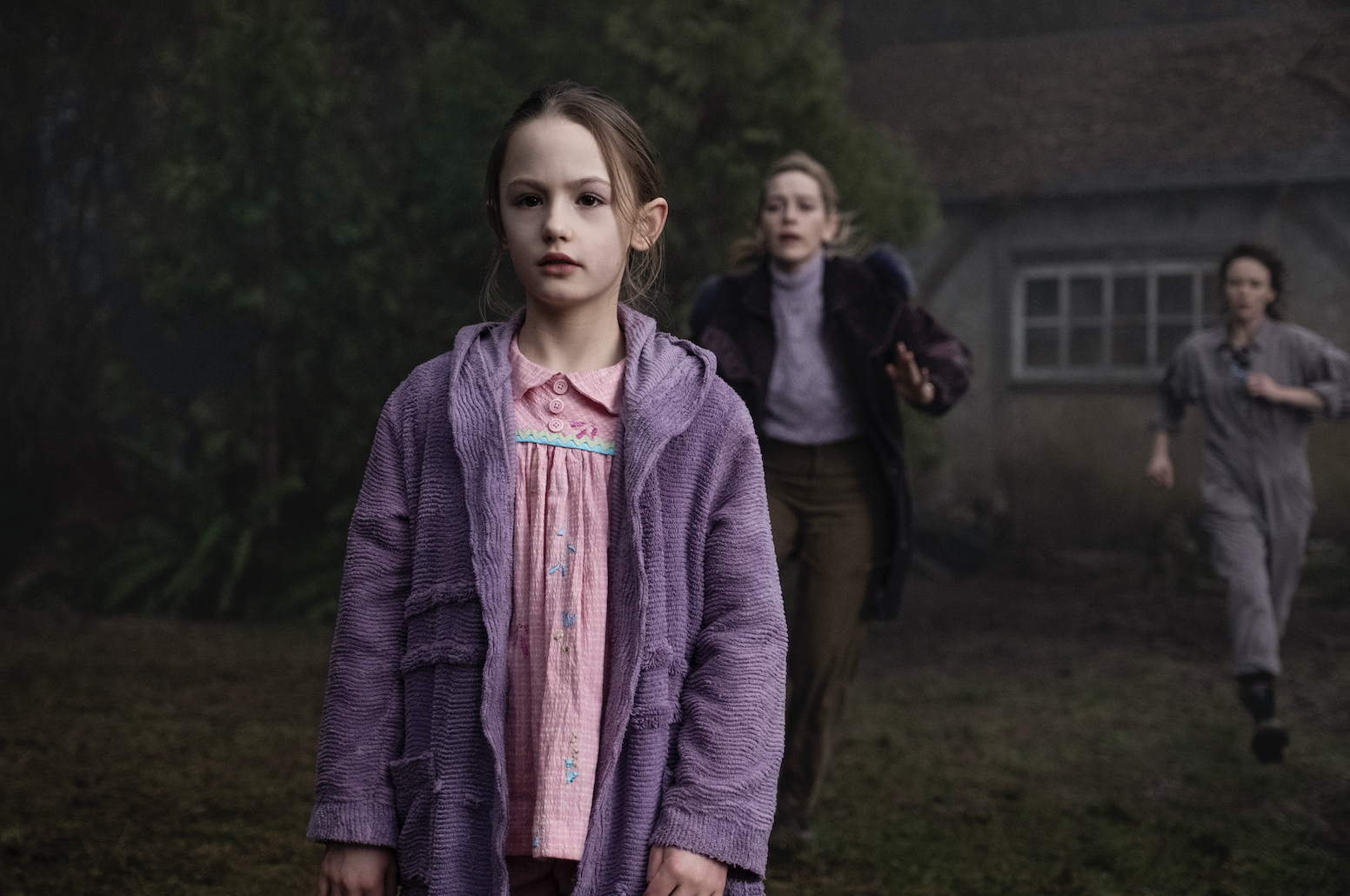 If Hill House was about trauma, what is BLY MANOR about to you?

It’s about love. It’s about trauma too. Everything is about trauma. I think the first season to me is about family. The way in which we are connected genetically to other people and that’s weird. I think this season is more about how we are emotionally connected to people and always will be. That’s weird. [For example], I know my first boyfriend or whatever will always be that. That’s a ghost, in a way. It lives with me even though we don’t talk very often. Even if you do maintain a relationship, there’s that weird shadow or imprint of other people that we’ve shared that with.

Netflix’s THE HAUNTING OF BLY MANOR Premieres On October 9th, 2020. 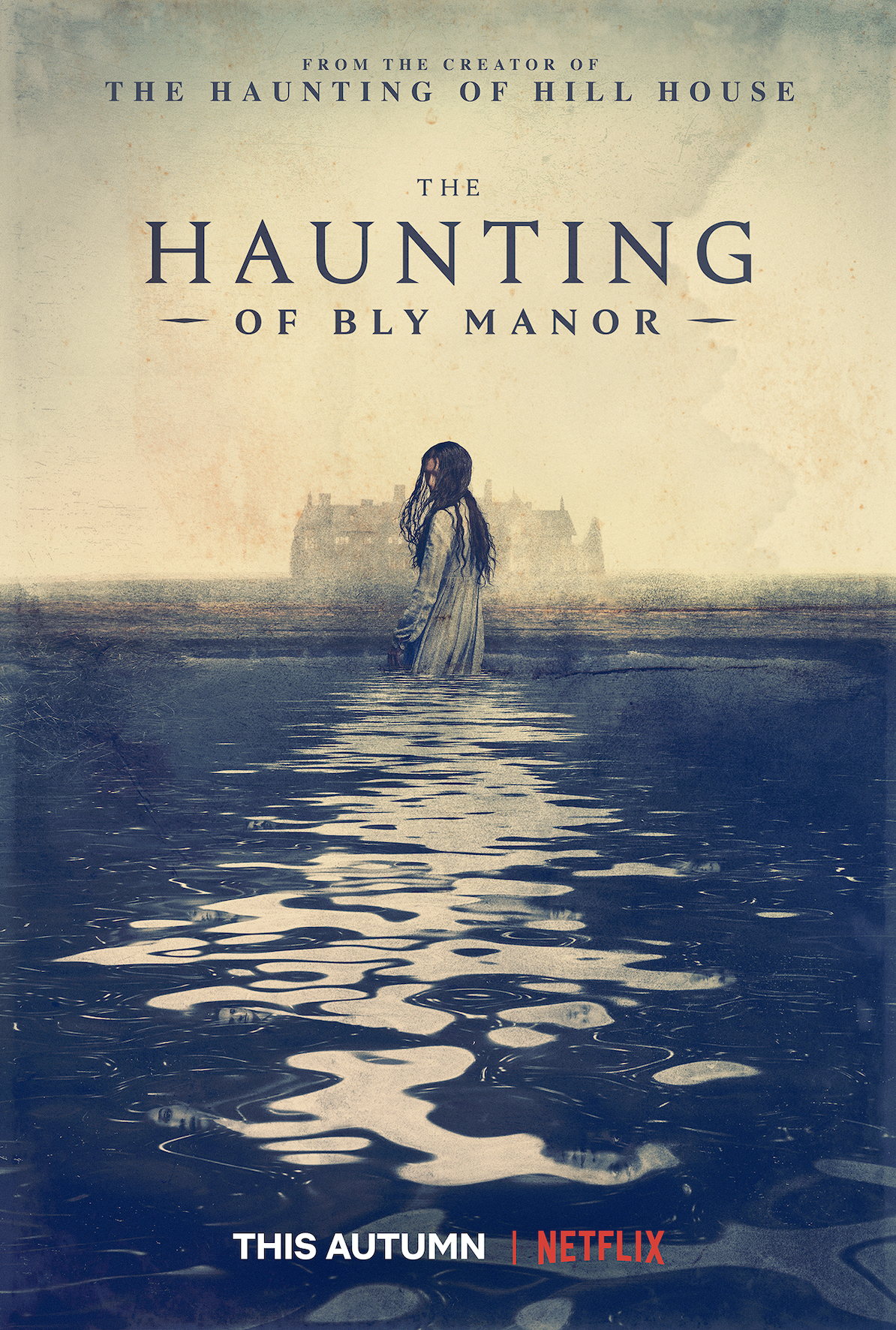