COME PLAY takes on technology through horror at the very pinnacle of our complicated reliance on these devices that we can’t seem to shake. In these socially-distanced times, it is not unusual that these previously reprehensible little screens are now our only way to connect with other humans. Director Jacob Chase takes on technology and monsters with a similarly nuanced approach in the feature film. In the end, it is all about empathy and connection, and the perversion of these impulses by the monstrous. We talked to Chase about COME PLAY, creature design, and the importance of human connection ahead of the film’s release. 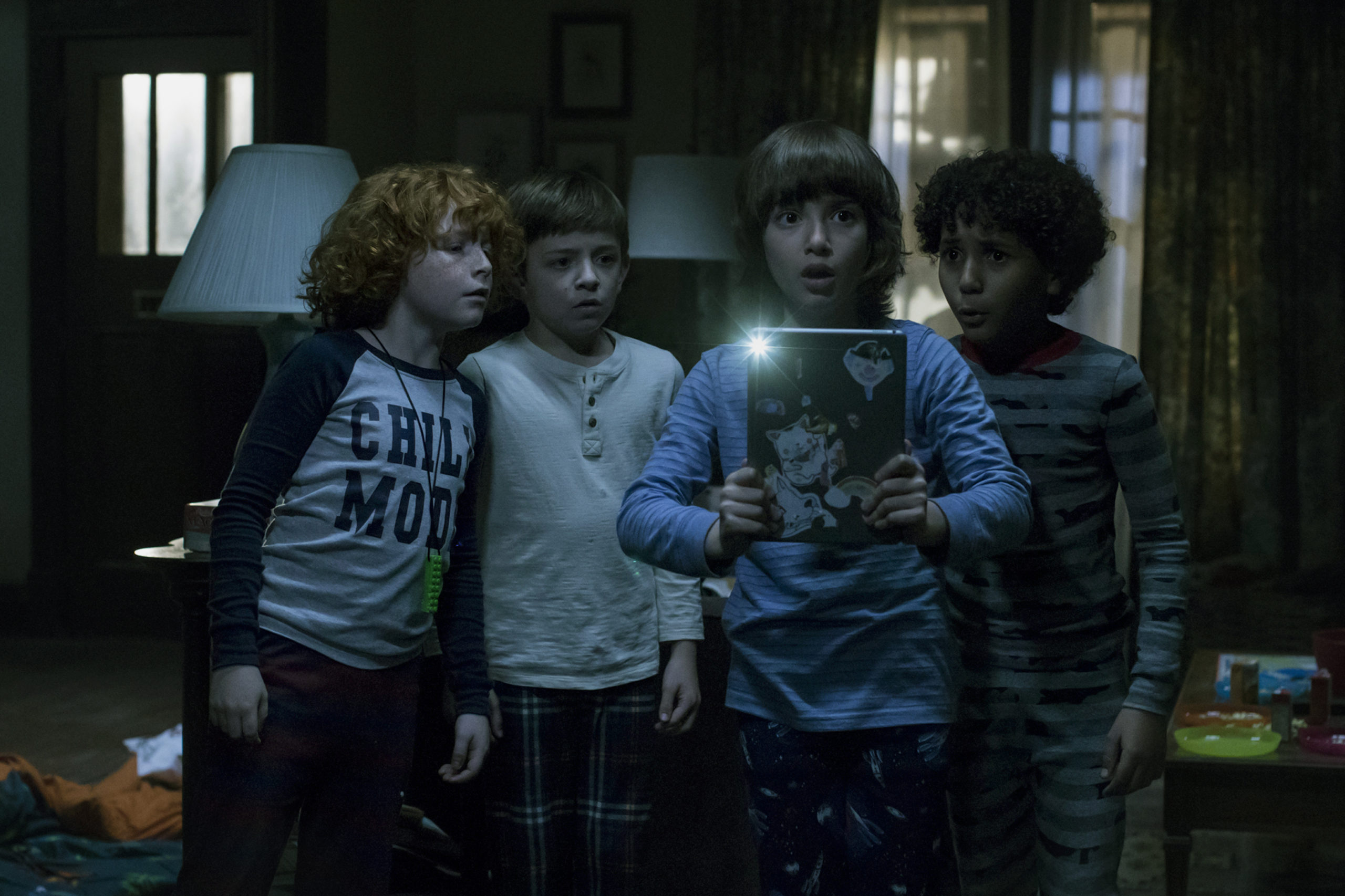 That’s correct. I made a short film called Larry a couple years ago. It was just a guy in a parking lot. It has the mythology of this Larry guy I created, but other than that it was just me trying to create something eerie and scary, and full of suspense in a five-minute period of time. I got into the lucky position of getting to adapt it with Amblin. I ran with the idea and it became something much bigger.

Was the short film created with hope or intention to become a feature?

In the back of my head, there was part of me that knew that had worked for other filmmakers. The realist in me thought that would never happen. I just want to make something cool. I have made dozens of short films over the years that have been well received and gotten me other kinds of work. But I had never gotten close to anyone saying, “We want to make this into a feature.” The fact that I made this one and multiple studios were trying to get it was really incredible. I went with Amblin, and I grew up on Amblin movies. It was the perfect place to make this one.

All of the short filmmakers I’m friends with won’t say it out aloud, but there is that dream there to get to make a feature.

We’ve all seen David Sandberg and we all hope to go from short to feature. It is inspiring. But, at the same time, it inspires me to make the best possible content that is short and scary and makes you feel something.

COME PLAY centers around a rich family story. How did that develop from the short?

I had come up with this mythology for Larry in the short. This creature who is able to manifest and access you through your technology. That I felt would carry through to the feature. I was thinking of who would be the worst family for that to happen to. In a horror film, you want to put people through hell, you want them to go through the worst time in their life. And you always feel bad for the characters when you are writing it. So it started there. At the same time, my wife works with kids with autism, she’s an early interventionist. For a while now I’ve had a window into that very specific world. Separately I’ve long thought I would like to tell a story of one of these families. The idea came to me to marry these two together. I could take a young boy who is on the spectrum and is non verbal, who needs his devices to communicate with the world. This is the absolutely worst family in the world for Larry to try to access through technology.

In COME PLAY, technology isn’t an addiction, like someone who is compelled to tweet all the time, or Heather in THE BLAIR WITCH PROJECT, who feels like she needs a camera to confess, but is really Oliver’s lifeline.

Hopefully, everyone can feel the fear of it. I think we are all addicted to our devices. I am as much as anybody. But at the same time, if it was just a character who needed it to tweet, I don’t think it would be as fearful.

“Any good horror movie is in conversation with the audience.”

Can you speak about Larry’s character design? There is just something so exhausted-looking about a creature with a curved spine.

I used to run this haunted house for years with a bunch of my friends. It was amazing and I miss it. I made this costume one year of this big stilted monster. It was me, on stilts, with these long dangly legs and these long arms. It was a different type of character in the haunted house, but when it came time to make the film, I still had that costume lying around. That became the silhouette for the short film. I couldn’t afford to hire the Jim Henson creature shop [laughs], but then when I could for the feature I took that general silhouette. I told them that I wanted [it] to feel creepy and terrifying, but not [something] that was trying to make you afraid. I wanted [Larry] to feel like this embodiment of loneliness and pain. That curved back is exactly what you were talking about. It is painful for him to walk. That transitioned all the way from the creature design to the sound design. The way he moves, and sounds, and moans was all about making it feel like it feels to be lonely and yearning for connection. I think they did a great job both in the design and the ways the puppeteers moved him. It is really emblematic of what loneliness feels like.

It’s easy to empathize with Larry, but he also hurts people.

That was the goal. I was inspired by the first Frankeinstein movie. The monster is scaring people accidentally, but he is well-intentioned. My favorite villains in general, whether in monster movies or not, are the ones you have empathy for and you understand a bit. Even if you don’t always agree with them and are still terrified of them, you understand them. That’s what I wanted to do with Larry the monster. 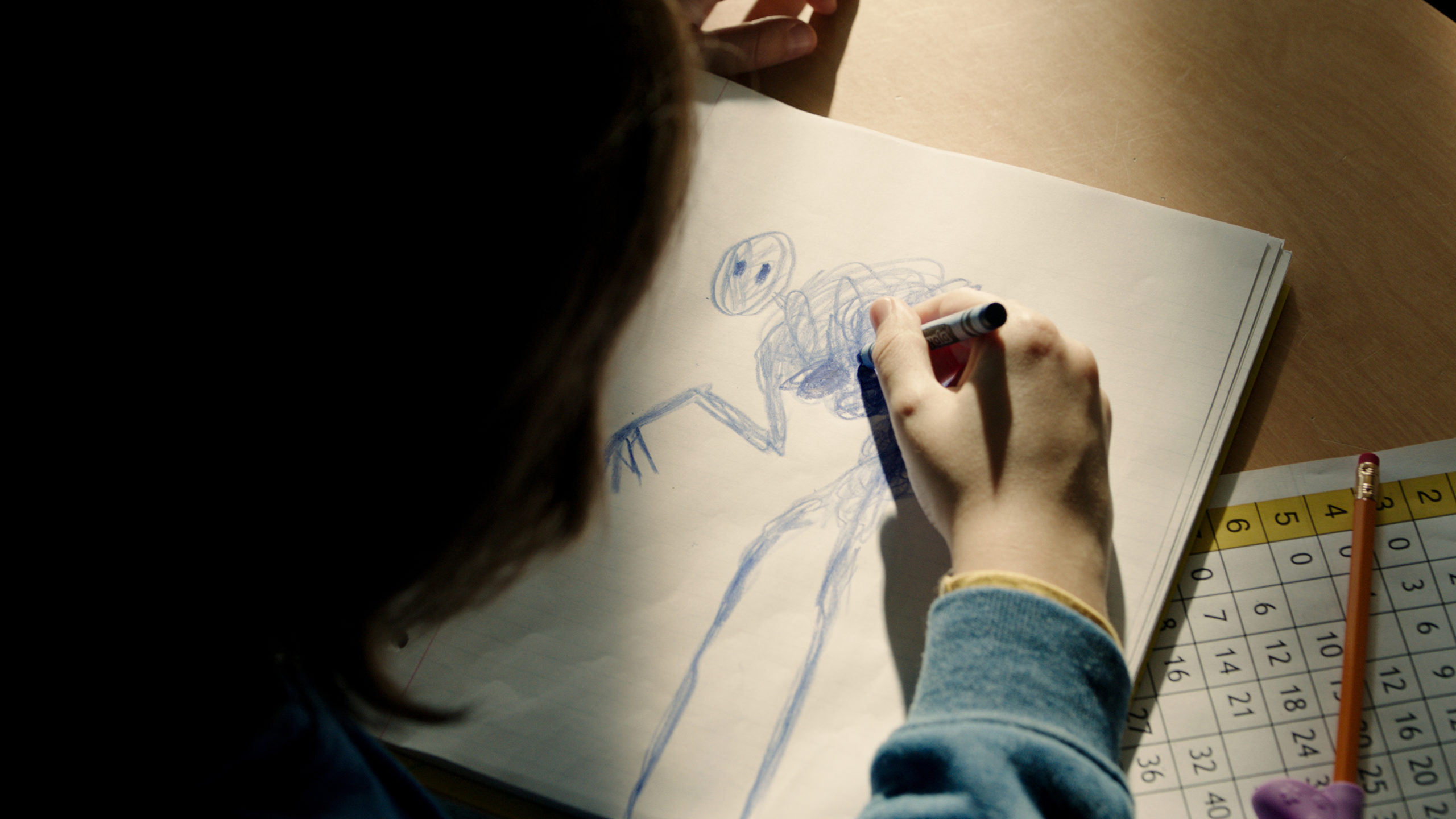 The visual language of the film makes COME PLAY very immersive. How did you go about creating that?

The goal was always that Oliver was the main character of this movie and I wanted to be in his shoes as much as possible. That meant being at his eye level a lot. It also means seeing the world from his lens. Me and our DP Maxime [Alexandre] were always finding ways to enclose him in doorways or the booth, ways to make him feel claustrophobic or stuck and longing to communicate. As the film goes on and as Larry becomes more of his life, his world and our visuals open up in a way. Hopefully, this is all subconscious. At the same time, so much of the visuals are letting the audience have fun looking around the dark corners. Letting moments breathe and having something in frame to wonder if Larry is sitting there. Any good horror movie is in conversation with the audience. You are toying with them in a fun way, and they are on board and want to be toyed with. We were constantly thinking of that stuff when we were storyboarding the movie.

The true answer is spiders. My wife and I found a tarantula in our house once and it was the most horrifying night of my life.
But the more interesting answer, which I am truly petrified by, is large man-made objects that are dark. As an example, the Hollywood sign at night is unlit. It absolutely petrifies me, to the point that I can’t drive near it. Or a giant roller coaster at night when it is not lit, and it is just this weird shape in the sky. I can’t explain any rational reason why I’m as afraid of those things as I am. It just does something to my mind and it breaks it, and I get so much anxiety from seeing those things.

What do you hope audiences take away from COME PLAY?

A lot of people have asked me about the technology aspect, and if technology is dangerous. For me, it was never about the technology. I was using technology as a window into this world. It is hard to be afraid of a piece of glass in your hand. What I was trying to do is make you afraid of what is behind the glass. This is ultimately a film about connection. It’s a film about empathy and connecting with people you normally wouldn’t connect with. Whether that means the bully that is mean to you or a kid with autism or a monster who is desperate for a friend. If this movie has any lofty goal it is to spread compassion in the world.