Book Review: In “FOLLOW HIM,” Your Heart Will be the Main Course

By JAMES TUCKER Written by Craig Stewart Published by Hellbound Books I’ve always been a sucker for a good cult. The lengths to which broken, desperate people will go to feel as though they belong, the manipulative, vampiric leaders who prey on people to feed voids within themselves, and the apocryphal, batshit theology that often plays upon established mythologies and takes them to places hereto unexplored (hello childhood trauma)… it’s the most compelling subgenre of horror for me, and always will be. So when I was approached to read Craig Stewart’s FOLLOW HIM, a mashup of cosmic horror and extreme horror that follows a woman desperately trying to save her fiancé from a doomsday cult whose theology focuses on the DEATH OF LOVE, I couldn’t resist. FOLLOW HIM is mainly about the struggle between Jacob Donahue and his ex-fiance Nina, following both characters after Jacob joins a cult known as the Shared Heart. The Shared Heart believes Love to be the essence of a Love-craftian creature (see what I did there?) and believes (with no spoilers) that by serving a disfigured, barely human prophet known as “the Collector” they will be connected to this creature, which they call the one true God. In doing so, they forsake all aspects of themselves and become willing to do and sacrifice anything in the service of their God. Jacob, feeling as though his relationship with Nina is broken and that he has nothing else to live for, has abandoned all aspects of himself to the cult and assumed his identity as a “Dreg,” believing himself to be an important part of an upcoming event called “The Harvest.” But when Nina discovers that he’s joined the Shared Heart, she “extracts” (read: kidnaps) him in the middle of the night and takes him to their old home to begin the deconversion process. The majority of the novel focuses on the battle of their wills as the Shared Heart closes in, determined to recover Jacob and resume their plans for the Harvest… only, Love might have more in mind for both of them than anyone has realized.
This novel has it all. Grotesque, Amnesia-esque visions of monstrous cunnilingus, (yes, you read that right) mutilated half-human monsters chewing on organs, prophetic dreams that could have come from a lost chapter of Revelations, impromptu genital mutilations, and an assortment of broken, helpless characters being driven to inhuman actions. The tension between Jacob and Nina, their messed up shared history that slowly unravels as the two of them square off in their abandoned house, is brilliantly written and believable, and will have the pages turning so quickly in your hands that you won’t look up from them till nightfall. Moreover, the Shared Heart itself is one of the more interesting cults I’ve come across in fiction: the idea of Love as an enemy to be defeated, a thing to be given up to a higher power so that higher power may rule the heart INSTEAD of Love, is a compelling idea that does the same thing for the mysteries of the human heart that Lovecraft did for the empty void of space. And Stewart isn’t afraid to address the most extreme ends of that subject: as the story goes on, Nina and Jacob rip at each other’s wounds, nearly tearing each other to shreds in the name of their supposed “love,” as well as suffering psychosexual visions that rival the best of Barker’s work. 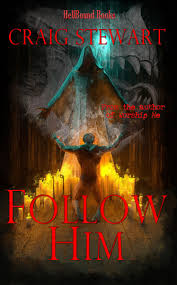 This is a smaller note, but it’s something I really appreciated: all of the secondary characters were fleshed out and sympathetic, and their every action was believable. I felt for the other Dregs we got introduced to and even liked quite a few of them, even when their role in the Harvest became apparent. Speaking of the Harvest, the ending is apocalyptic and truly biblical in scale, a nihilistic punch to the gut that feels pleasantly appropriate considering everything that preceded it. My favorite thing hands down though? The reveal of who, and what, the Collector actually is. You thought Reverend Kane was scary. In short, Craig Stewart is an author to follow. And if the description I gave above piques your interest at all, FOLLOW HIM is a book you absolutely need to add to your reading list. However good I made it sound it’s even better, packed with nightmarish imagery, sympathetically monstrous characters, and the malicious machinations of grotesque gods. As the Collector would no doubt say (if he could), Bon Appetit.