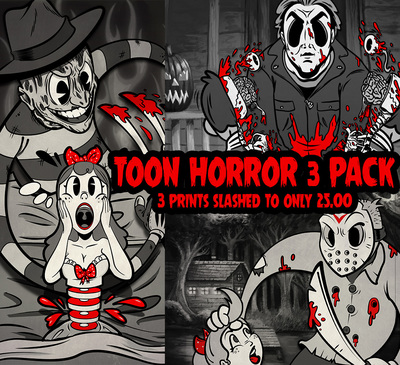 With more than ten years in the creative field, Austin, Texas based illustrator Devin Lawson has worked in animation, design, illustration, 3D modeling and more. Lawson’s talents can best be seen on his artistic website Spicy Donut. Check out the shop section of his site which features a bevy of collectibles that tip their hat to early illustration styles from the 1920s such as Felix the Cat (precursor to the sound cartoons like Mickey Mouse). Large oversized eyes, cartoonish stretchable torsos, demented looking smiles… these are things of pure nightmares. 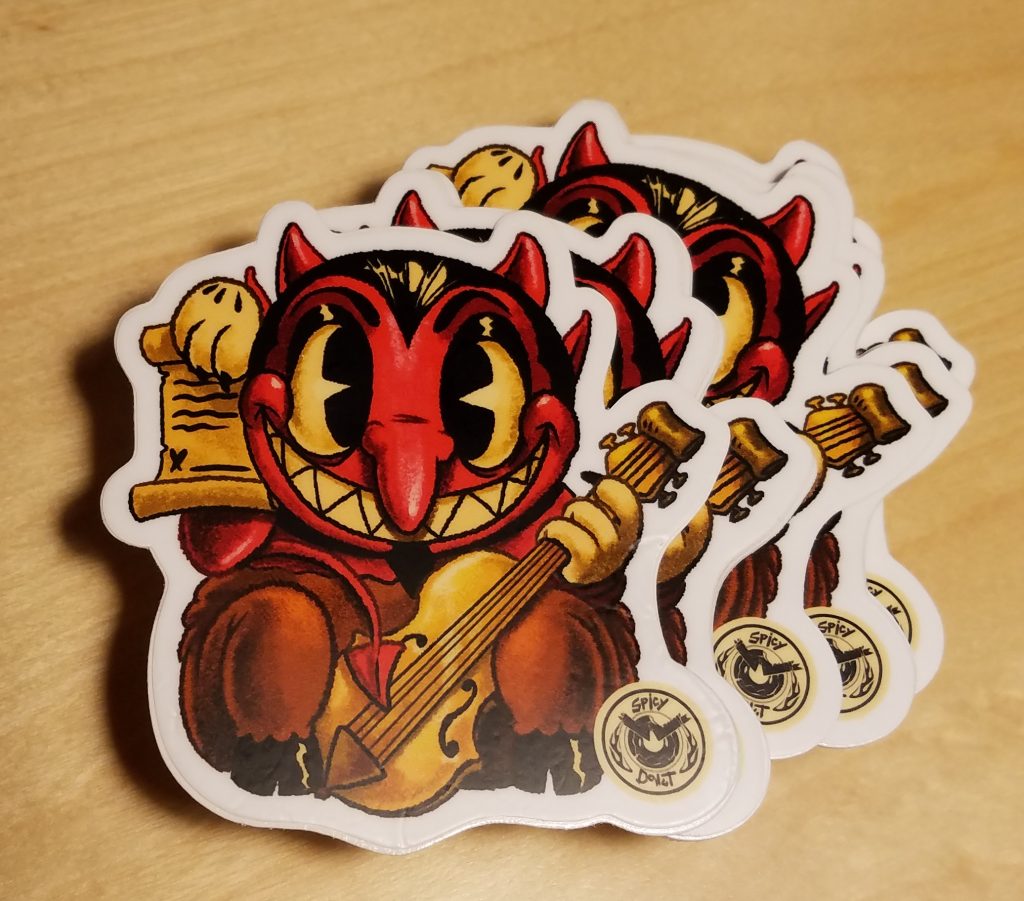 Stickers, enamel pins, patches, screen prints, apparel (t-shirts), fine art prints, a resin figure, Spicy Donut has it all. The waterproof sticker section is filled with great horrible notables: take for instance this LUCKY DEVIL 3 INCH STICKER is made in the Japanese style of Maneki-neko (beckoning cat) or Lucky Cat. This figure in Japanese culture is said to bring luck to their owners. The lucky devil sticker has an outstretched paw (which is a trait is shares with its cat counterpart), holding a contract. With a banjo in tow (call back to the devil goes down to Georgia), this devil is up to no good. In stock and ready to go for the low price of $3 USD. 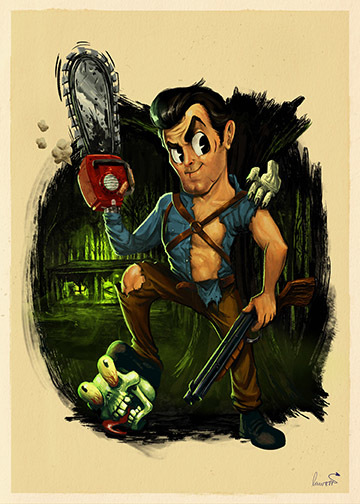 The “Rubber Hose Horror” section is where most horror fans will want to check out. All the creepy, crawly, horror goodness is here, from 11×14 inch fine art prints of popular film characters like Pinhead, Chucky, Pennywise, and Leatherface. These shockingly sublime illustrations run the gamut from the cute to the creepy, take for instance the EVIL DEAD – 11×14 INCH (also available in 5×7 inch prints) FINE ART PRINT. Sure, Ash stands statuesque with chainsaw hand and shotgun on the ready, it gets chilling when you realize he has one foot up (literally) on a Deadite’s severed head. Look a little closer and one might notice a served hand tap, tap, tapping on Ash’s shoulder (could this be his own severed appendage?).
Prices: 11×14 inch ($10 USD), 5X7 inch ($5 USD)

The creepy is really on display in the black, white and red coloured LEATHERFACE IN LA LA LAND 11×14 INCH FINE ART PRINT. In a scene straight out of a horror film (imagine that), a Lawson imagined Leatherface wields his chainsaw with ease, one might notice the three cartoonish severed female heads (where might the bodies be?) with blood exuding out of them, adding a touch of colour to the whole illustration. Each avalible print of the web store comes signed by the artist.
Price:  11×14 inch ($10 USD). 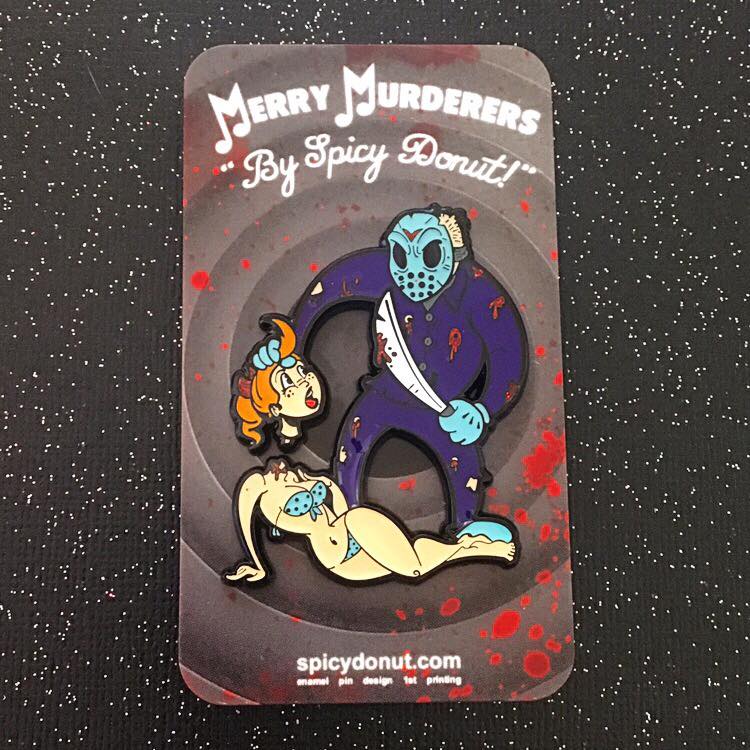 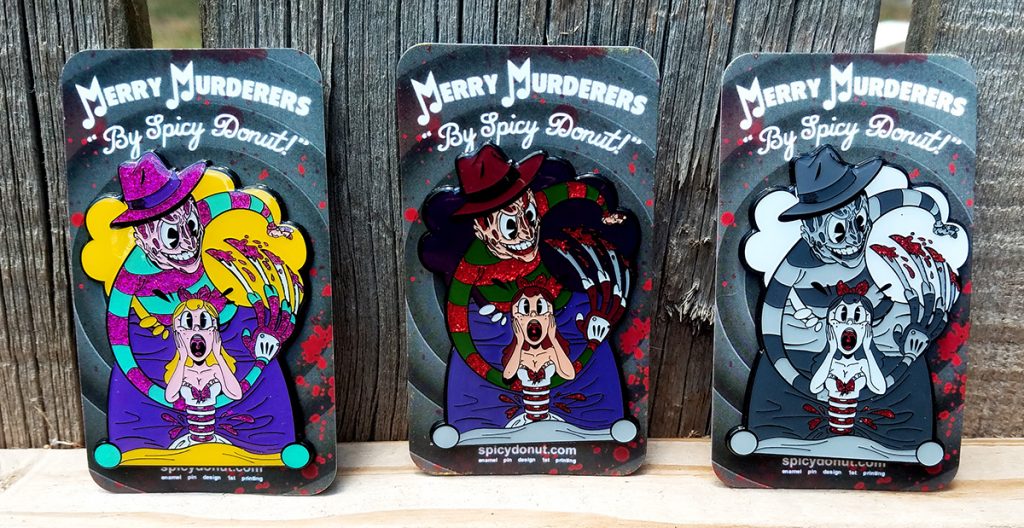 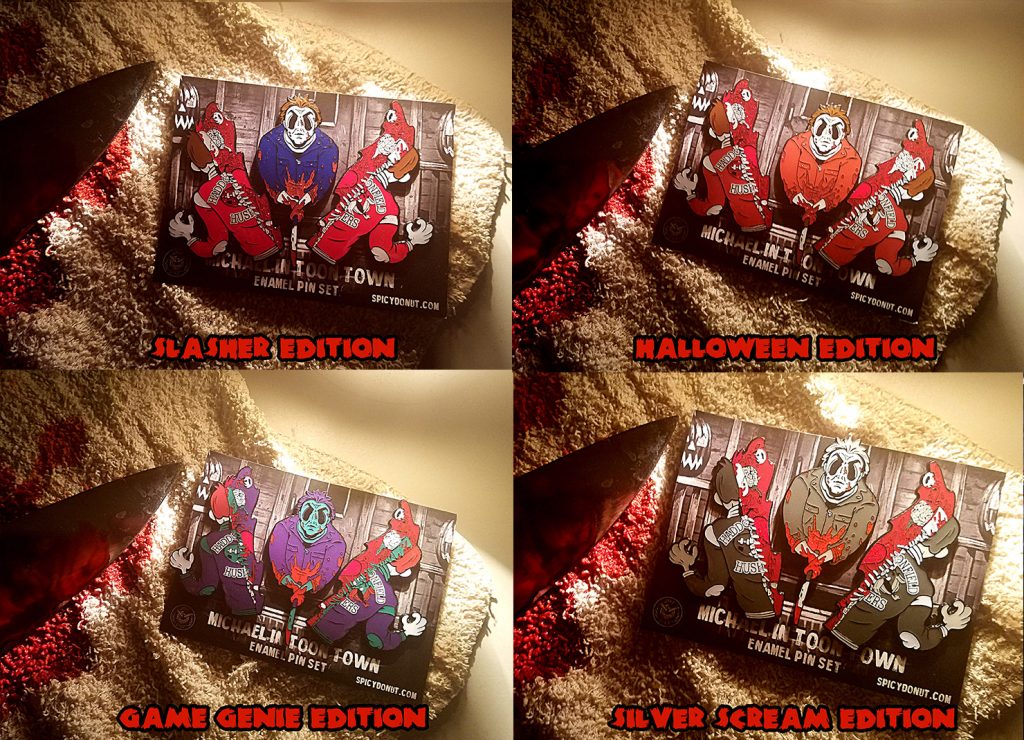 Some of these designs are sold out.

Other notable enamel pins include Michael in Splitsville and Freddy in dreamland, both also having their own blood soaked scenes of terror. Spicy Donut has just recently surpassed a Kickstarter goal for MERRY MURDERS ENAMEL PIN SERIES. Lawson will now be able to release more cartoonish terror in many old and new ferocious designs, from glow in the dark Chucky, to Sam pins and so much more (of course one can only hope, these new designs will make it to the Spicy Donut store at some point, and not just be limited to the backers of the campaign). 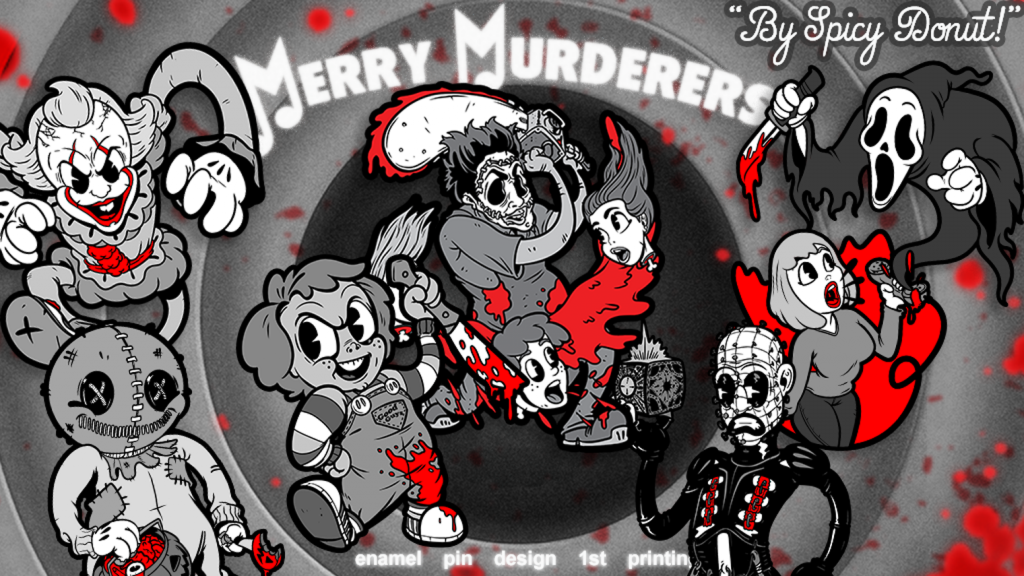 Keep up on all that Spicy Donut has to offer in apparel and collectibles on its website, and keep up to date on announcements on the Spicy Donut’s Social media accounts (check out more that may be coming go to the Kickstarter page here).