Armed with a wicked talent well beyond his eighteen years, Indiana native Noah Rivers hopes to leverage his technical skill as a sculptor/painter to launch a career in special effects—a development which seems a virtual certainty to anyone lucky enough to view his elaborate creations.  As an avid horror fan who began creating at a young age, Rivers’ “spare-bedroom studio” serves as the laboratory where he builds his frightfully gorgeous masks and busts. He may be a fairly new face on the convention circuit (he took the coveted “best new vendor” prize at Indianapolis’s Mask Fest in 2017), but with work as creative, beautifully executed, and meticulously detailed as his, it’s only a matter of time before Rivers becomes a sought-after effects artist like the old-school greats he looks up to. Below, we ask him about his favorite movies, how he got started sculpting, and what it meant to him to be recognized by his peers at Mask Fest.

What is your artistic background?
I’m super lucky to have two supportive parents, who are both artists themselves and understand my passion! I’ve been sculpting and painting as long as I can remember, but really started taking it seriously around age eight. I just recently graduated from High School and am looking to get involved with effects work for movies!

What’s your favorite horror movie?
That’s such a hard question! I absolutely love the atmosphere of John Carpenter’s HALLOWEEN (1978).  It was one of the first horror movies I saw that impacted me in such a profound way. I’m also a big fan AN AMERICAN WEREWOLF IN LONDON (1981). Rick Baker’s work in that film is what made me realize that you could make monsters for a living. That transformation scene is so insane! EVIL DEAD II (1987) is also a lot of fun, has so many over-the-top practical effects, and is still a major inspiration in my art-making.

Was there a moment when you realized you could combine art and horror?
Since I was little, I’ve always been into Halloween and scary stuff. In kindergarten I was asked to make a gingerbread man for Christmas, and I made mine angry and gave it long, sharp fangs. They made me do another, less frightening one, but I kept the scary one, and it goes on our tree every year!

Which piece are you most proud of?
I’m really excited about one that I call “Gourd Lord”, he’s like this rotting pumpkin ghoul and it’s was a lot of fun making it!

What is your preferred medium?
I absolutely love WED clay. I actually hated it at first and had a lot of trouble with it, but over time it’s become my favorite. WED clay’s where it’s at!

What has been your greatest challenge as a maker?
Self-doubt. Getting into a project and losing confidence. For every sculpt I complete there are several that get torn down and scrapped. I really struggle with feeling that my stuff isn’t good enough, but in a way, that’s also a good thing! It just keeps pushing me to try to get better and better.

Is there anyone else’s work you’re inspired by?
Casey Love, Norman Cabrera, Rick Baker, and Rob Bottin have all had a tremendous impact on my work and life. Casey Love’s work was one of the main things that inspired me to start sculpting when I was a kid. Years later, I met Casey at Mask Fest, and he has always been encouraging and supportive. I definitely wouldn’t be where I’m at today without him! I’m also really into Mikey Rotella’s work. All of his stuff is just so mean and has so much energy to it!

Can you tell us a little bit about your creative process?
I usually sketch out my concept in clay, instead of on paper. I go through several before I land on one I’m happy with. The sculpt itself usually takes three or four days, and coming up with something I like can take a bit. I try to make convincing, lifelike monsters. There’s something super cool about thinking of something, and then seeing it come to life in 3D!

When you’re not creating, how do you like to spend your time?
I pretty much do this 24/7 and don’t sleep, but sometimes I hang out with my friends and watch horror movies (obviously).

Do you exhibit your work?
Mask Fest, of course! It’s a convention in Indianapolis, Indiana that happens every year. The most talented dudes in the industry come and it’s a lot of fun! Eric Austin [the founder] is the man! I also show my work in San Antonio, and David Sainz curates awesome exhibits. There’s one coming up in November called the “Children of the Night Gallery”. It’s gonna be awesome!

What’s the best horror movie you saw recently?
I had THE HOWLING (1981) on while I was working, recently. Seriously, I can’t get enough of Rob Bottin’s effects work! 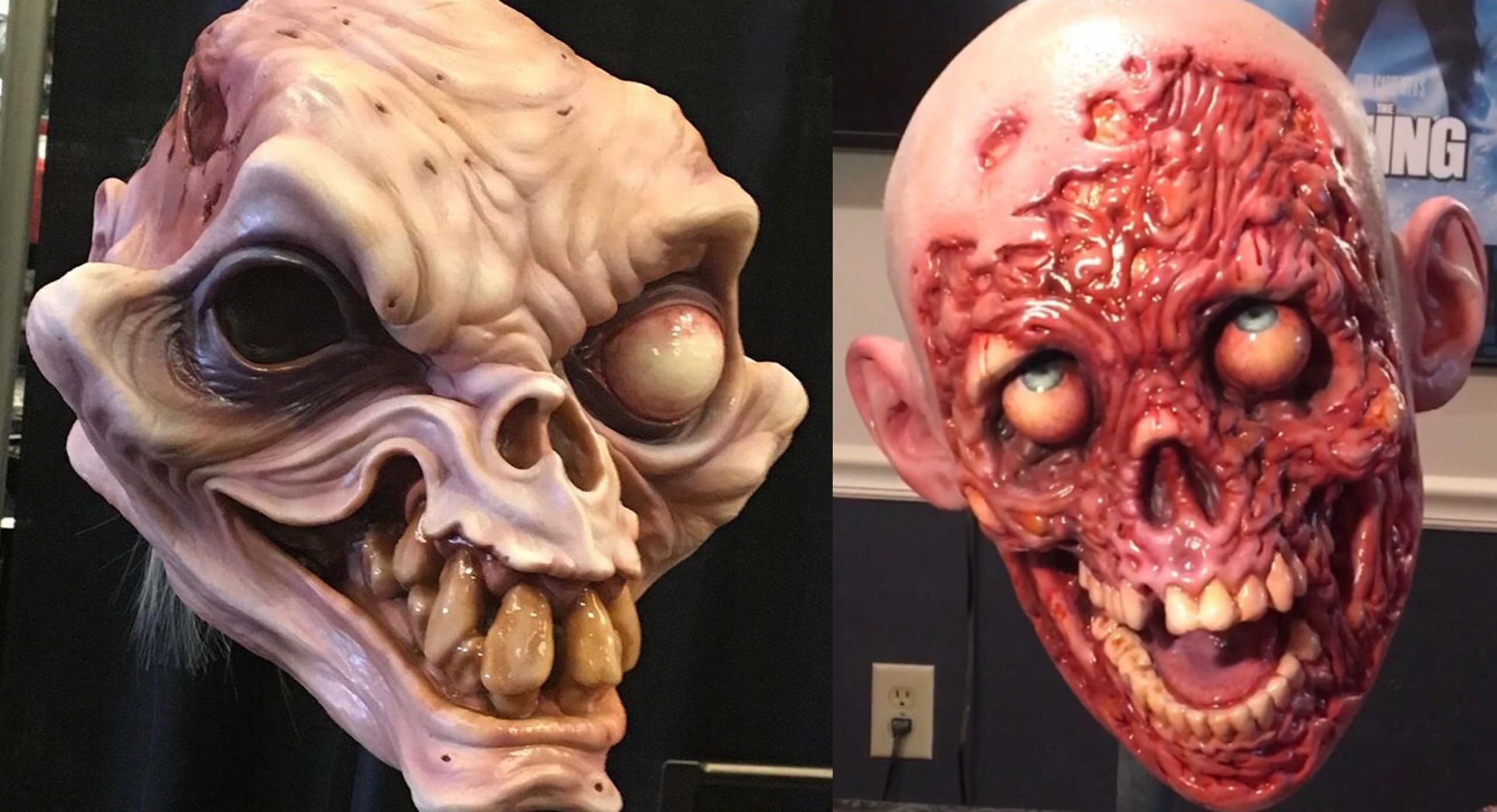 What three words would you use to describe your work?
Gnarly. Energetic. Spontaneous.

What did it mean to you to win Mask Fest’s “best new vendor” award?
I had been attending Mask Fest since I was fourteen, but finally was able to get a booth that year. Everyone was so supportive and it meant so much to be welcomed immediately into the community! Getting that award helped give me the confidence to start doing original work. 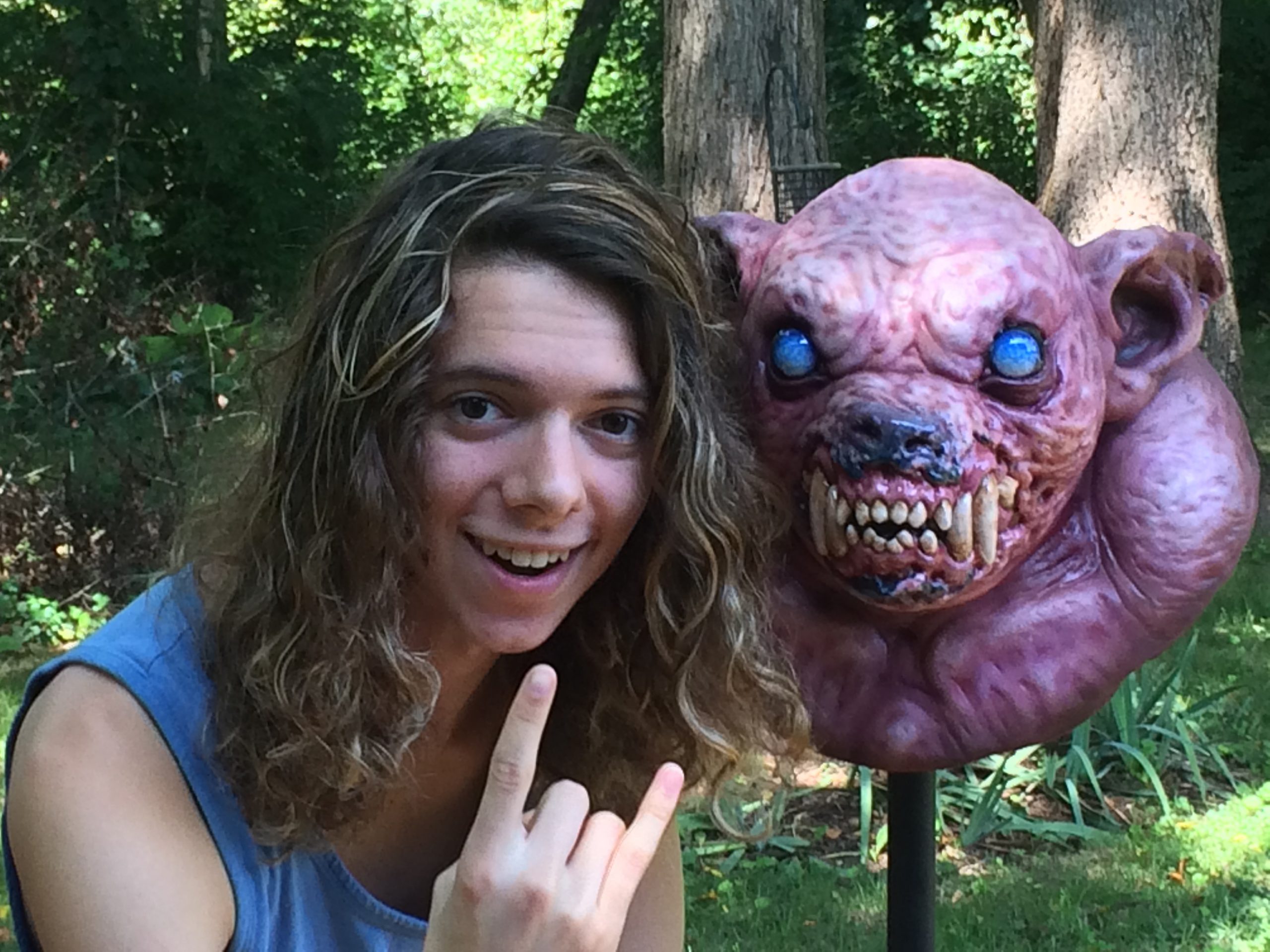