Hook up to terror with the official “APPS” trailer

The Chilean horror film is currently touring film festivals across the world.

APPS premiered in July at Korea’s BiFAN fest, and will soon play the Nightmares Film Festival, Buffalo Dreams Film Festival, Semana de Terror de San Sebastián, Razor Reel, Mórbido Fest and more than 20 others. Produced and directed by Lucio A. Rojas, José Miguel Zúñiga, Sandra Arriagada, Camilo León and Samot Márquez, it was written by Rojas, Zúñiga, Arriagada, León and Diego Ayala. Tutú Vidaurre, Nicolás Durán, León Arriagada, Nestor Cantillana, Fernanda Finterbusch, Ignacia Uribe, Leonardo León, Clara Kovacic, Ximena del Solar and Daniel Antivilo star; the synopsis: “Five stories where an app will open the doors to mystery and horror. A young woman falls into the hands of a group of perverts, belonging to a sinister network dedicated to the sinister online transmission. A voyeur discovers that his neighbors hide dark secrets that he wishes he had never heard. A young woman on a mysterious dating app. A group of friends on their way to a beautiful cabin fall into the hands of a sinister occult sect that hides behind this business. A little boy, used by his father to make dating online, discovers an enormous power to defend himself.”

“In Chile, the fantastic film genre is just starting out,” Rojas says. “In the past 10 years, local production of genre films has increased, though not thanks to state support, but rather because the filmmakers themselves have used their own money or support from private entities, all to be able to greenlight their own projects. This was the case for APPS; it was made with our own resources, and all of the directors chipped in.

“We are a group of filmmakers who have, in recent years, been included in important festivals, as well as having our work shown on different platforms,” he continues. “We expect that in the future this may contribute to some change, so that the production of genre films in our country may eventually increase.”

Adds Zúñiga, “The goal with this project has always been to reach the greatest possible amount of countries, spectators and genre fans. In a way it’s a movie made by fans, for fans.” 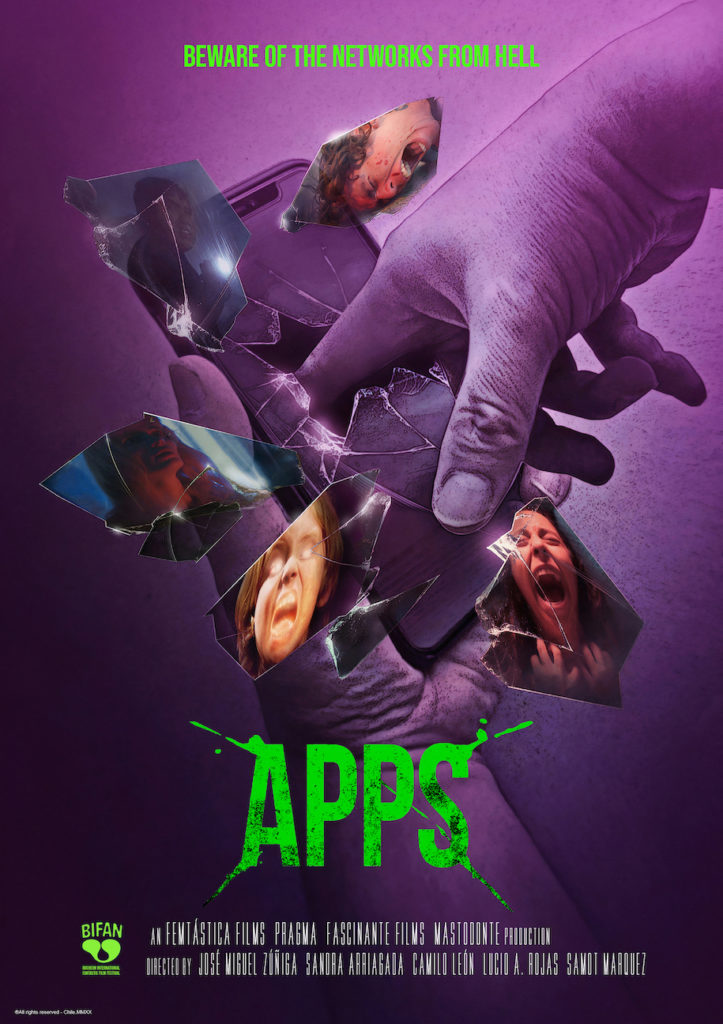