Hell Freezes Over Via TouchTone Phone In “976-EVIL”

976-EVIL is an ’80s movie that vibrates nostalgia for me as I have been a massive fan ever since renting it in high school and was actually my initial introduction to the excellence that is Stephen Geoffreys. 976-EVIL encompasses a spooky ’80s vibe that includes touchtone phones, demonology, cats, spiders, and it just so happens to be Robert Englund’s directorial debut! 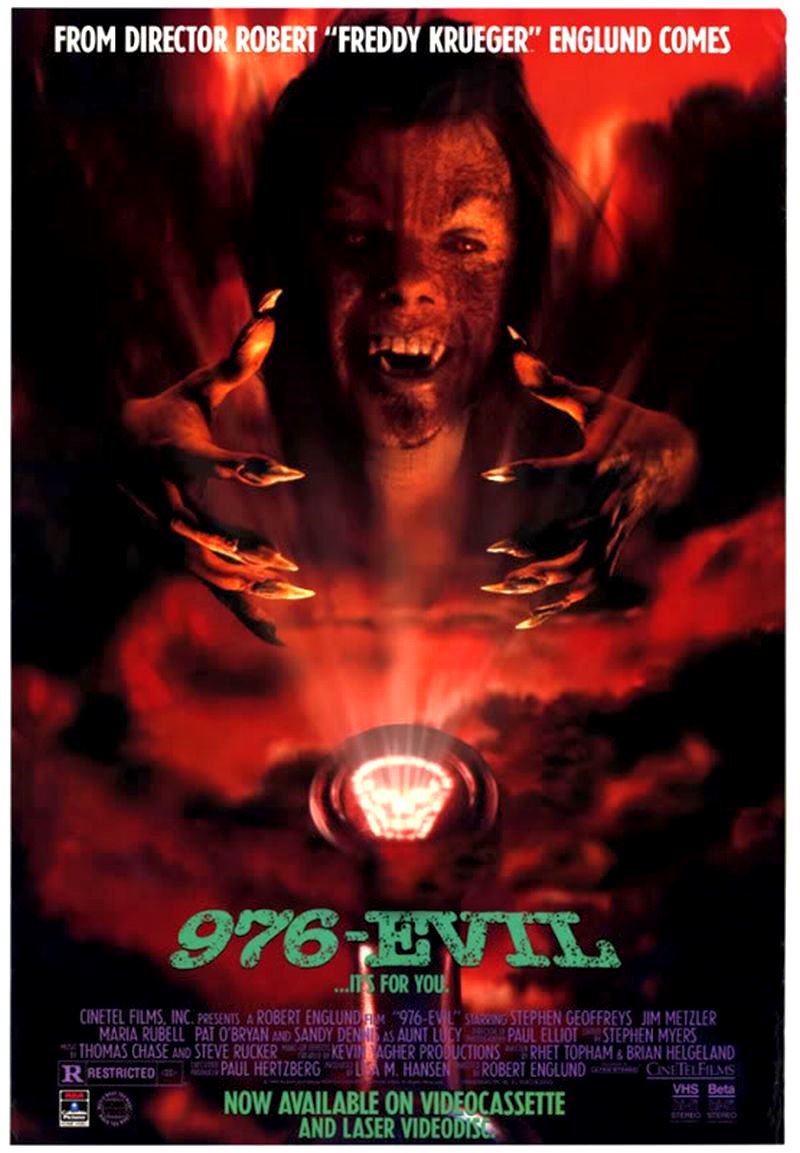 I often wonder if the idea for 976-EVIL came to Englund because of the phone tongue that licks Nancy’s mouth in A Nightmare on Elm Street. Then, I’m always curious if the writers of Are You Afraid of the Dark were inspired by 976-EVIL for “The Tale of the Phone Police” episode where kids call a 6 digit # that lands them in phone jail. These mysteries will be revealed to me one day when I meet Mr. Englund but for now, let’s get into this deliciously evil flick!

976-EVIL follows cousins Spike (Patrick O’Bryan), who is devilishly handsome, and Hoax (Geoffreys), who is a nerd that gets picked on both at school by bullies who are Spike’s friends and at home by his devout strict mother Lucy (Sandy Dennis). One night while Spike is reading a magazine, a postcard for a phone service falls out that reads your horrorscope upon dialling 976-evil and pushing 666. So Satany! 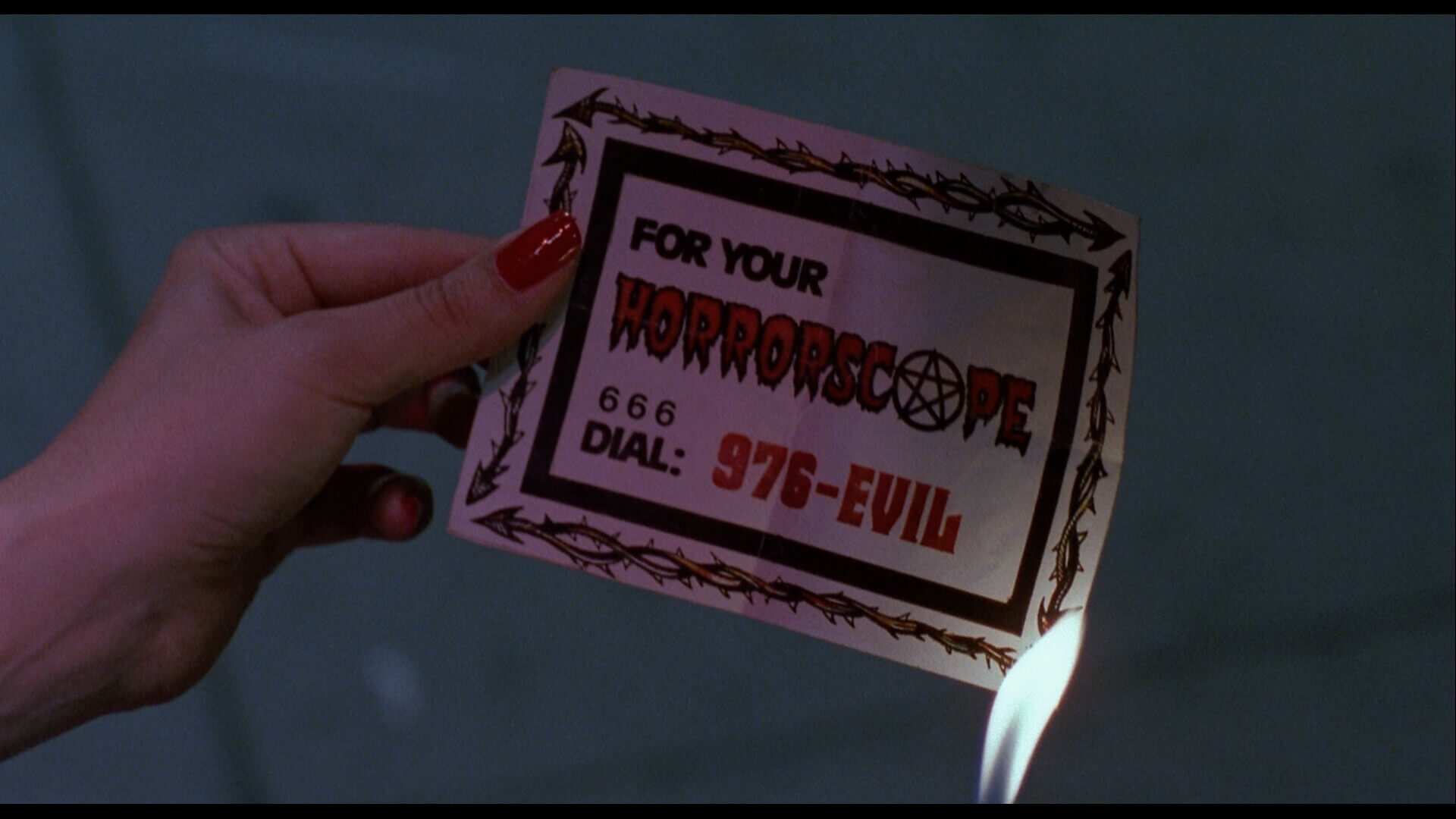 Spike and his friends all hang out and play poker in the projector room of a movie theatre called El Diablo where one of them works. El Diablo brings to mind 1991’s Popcorn as they both host horror movie marathons and for the record, I’d love to hangout in a projector room filled with horror posters such as Maniac, Critters, and Fright Night which is an intentional homage to Stephen Geoffrey’s character Evil Ed. I’d also like to point out that one of Spike’s friends is played by Darren E. Burrows who some of you may recognize from Cry-Baby but my fellow Canadian neighbours might know him from Northern Exposure, who I won’t hesitate to add I had a mighty crush on in the ’90s. 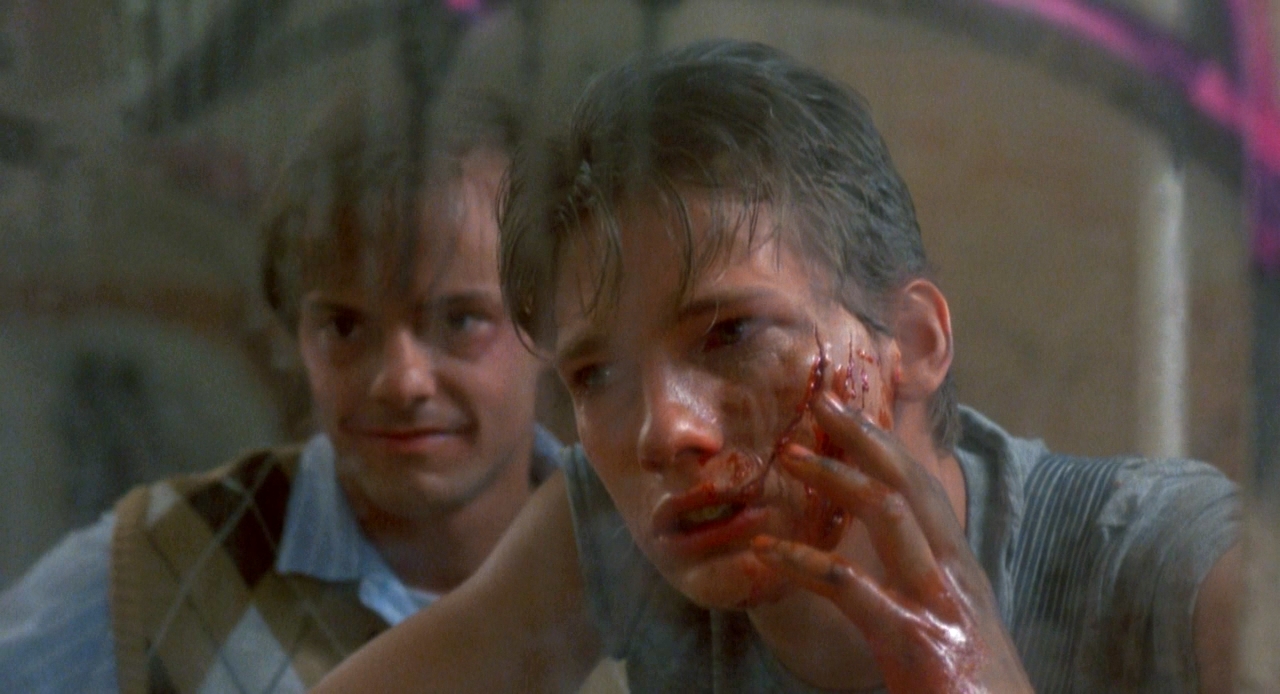 Once the evil phone calls begin, so do the mysterious events unfold.  After Spike’s first call, fish fall out of the night sky, which only excites Lucy, as she believes they are a miracle from God. Lucy, who lives by the bible, hates fun, loves cats, but wears provocative red lipstick, decides to contact Modern Miracle Magazine to have them report her story. Reporter Marty Palmer (Jim Metzler) is sent to interview the family but once his curiosity surrounding the strange events and mysterious members of this family persist, so does his investigation. 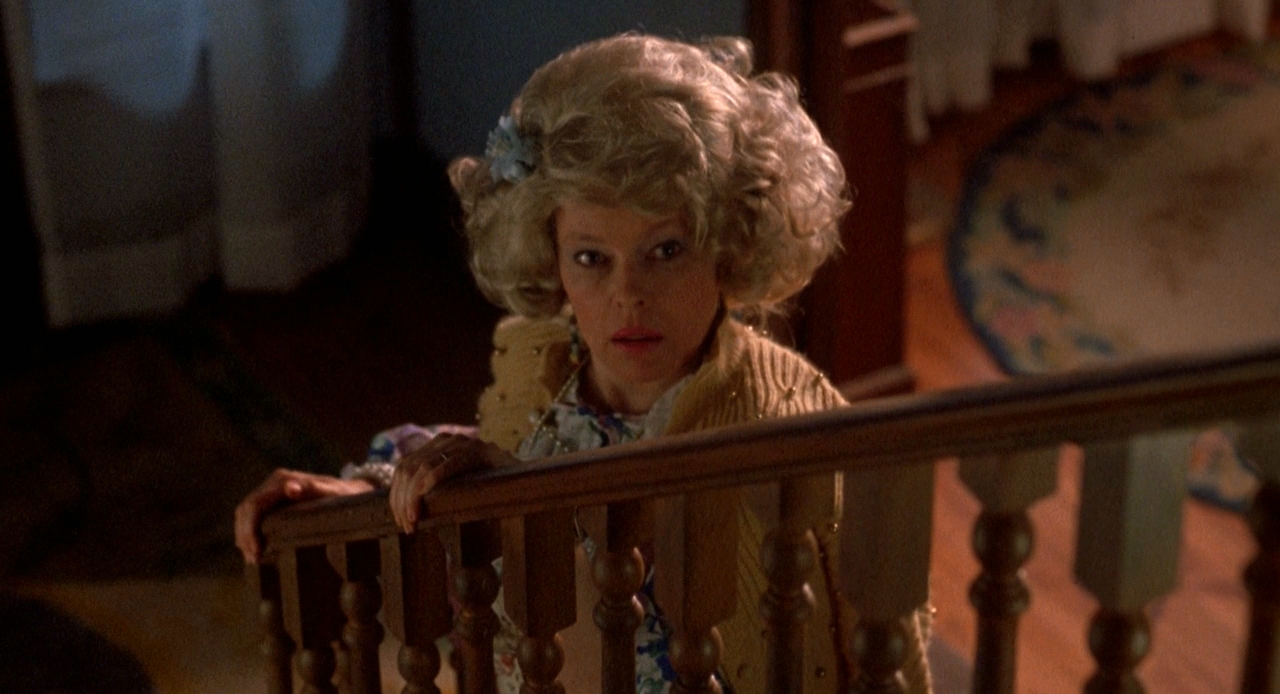 We are then introduced to Spike’s girlfriend Suzie played by the beautiful Lezlie Deane from Freddy’s Dead: The Final Nightmare and this scene truly warms my heart for Hoax as he is the most adorable scooter riding nerd I have ever seen and I love him! However, when Hoax gets a hold of the number and calls for his horrorscope, his behaviour starts to change. He begins to obsess over calling as he finds it to be a coping mechanism that helps him endure being bullied and due to his vulnerable state, the evil on the other end of the phone doesn’t hesitate to lure him into performing a satanic séance to cast a spell that will trigger you if you have arachnophobia.

Marty Palmer finds the calling card then investigates the headquarters of 976-EVIL and it is here that we are blessed with the presence of Robert Picardo who plays Mark Dark, the manager of the many different phone lines for people who like to call for sex, video game assistance and even to talk to Santa Claus. Now I’ll have to admit that it does take halfway through the movie for the real spooky stuff to happen but once Hoax begins to change form into something sinister, the real fun begins! And I for one am a big fan of gnarly demon hands with pointy fingernails. 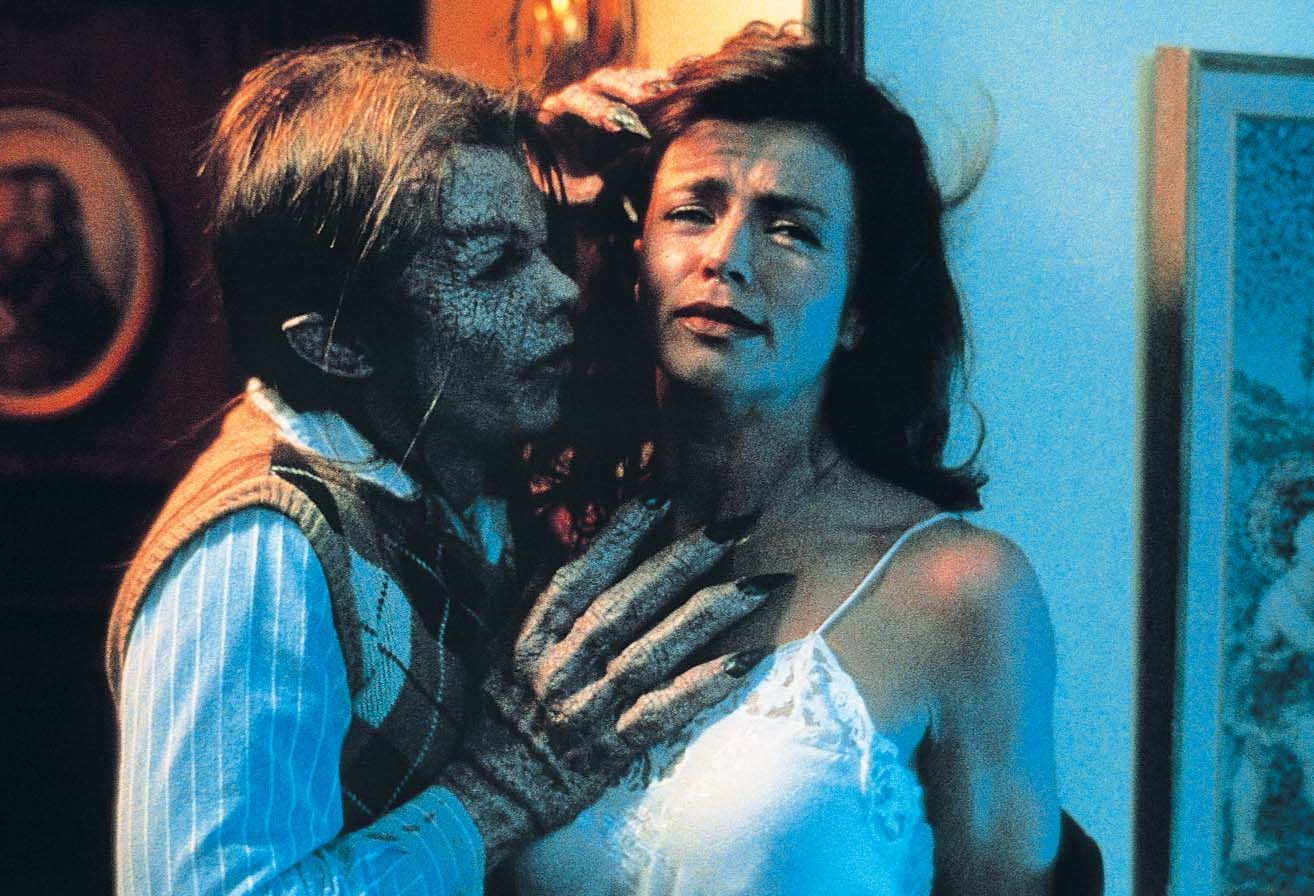 I love Stephen Geoffreys a lot, he is such a great actor who is both versatile and genuine in every role he plays and his effort and dedication to his characters radiate through the television screen. The similarities between Hoax and Evil Ed are uncanny, as they both go from geek to spawn of hell. Geoffrey’s was offered a returning role for Fright Night 2 but turned it down for 976-EVIL and good for him for launching a lucrative career in the gay sex film industry, I’m proud of all of his achievements and happiness.

976-EVIL is a classic nerd-who-gets-picked-on-then-gets-revenge horror movie with a satanic spin on killer phones. My favourite kill in the movie is on the roof of the movie theatre: death by neon satanic pitchfork is one I’ll always admire. My only gripe with this movie is the sound of the evil ringtone; it is quite aggravating to my eardrums. What I’d like to know is are there people in the world that still cover their couches in plastic? I feel like this was just an ’80s thing. So be sure to add 976-EVIL to your spooky October watch list but be careful, don’t dial Satan unless you want to be obliterated by a killer phone! Happy Halloween Horror Fiends!