There has always been a healthy horror community in Southern California. Over the past decade, give or take, more and more regional conventions and festivals celebrating horror films, monsters and Halloween have been popping up and generally thriving due to the ongoing desire of horror fans to gather and geek out. Recently, one such event served as a prime example. While it has undergone changes in name, location and ownership in the twenty years since its inception, Haunt X just gave local haunt fans and DIY haunt operators an opportunity to bask in a little taste of pre-Halloween spooky vibes.

Principally, the Haunt X convention fosters a community of independent owners and operators of haunted attractions and provides them with networking opportunities, information and resources for building their own hants; It also provides artisans and organizations a marketplace to promote and sell their wares and services. For this year’s event, owners Gary Shireman (who owns and operates the wonderful Coffin Creek) and Jason Thompson (who both develops haunts and works in the film industry), curated a conservative but colorful collection of panelists and vendors that provided a humble but endearing experience. There was also an afterparty on Saturday night. 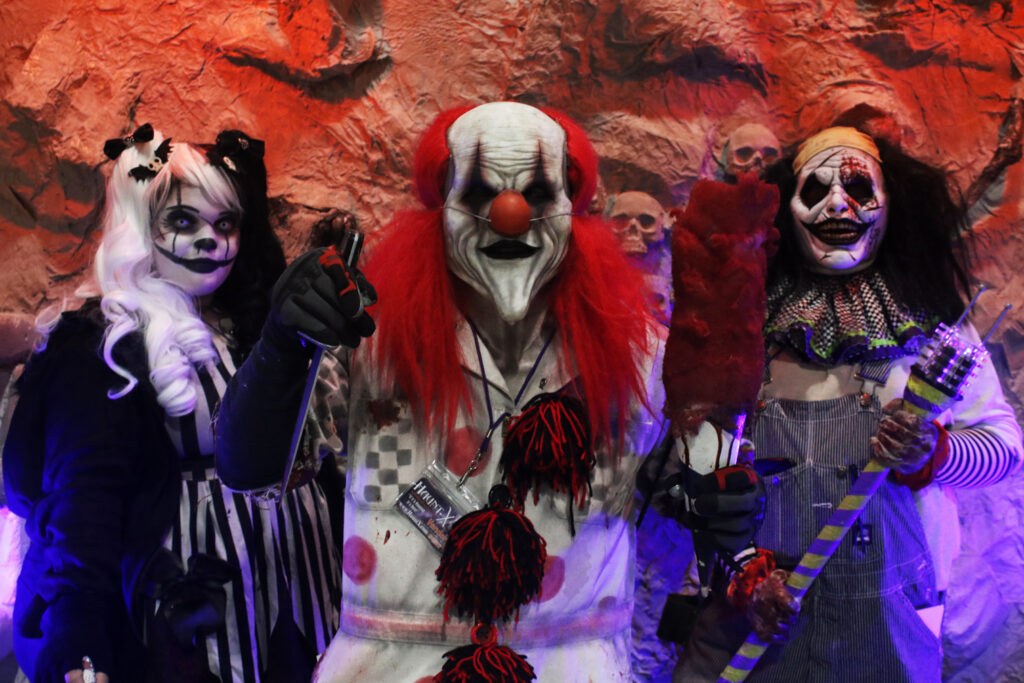 The event was held at the Pomona Fairplex, home of the annual Los Angeles County Fair. Each of the two presentation areas was comprised of a dozen or so folding chairs placed in front of a couple of folding tables and a decent-sized monitor, sectioned off with large black curtains. The topics included: creating a poster to advertise your haunt, creating a soundtrack for your haunt, lessons in scare acting, basics in electronic designs, and – among others – designing walk-through mazes and dark rides. The presenters of these panels ranged from folks who just do it for love of the game to Imagineers who work for Disney. There was also a DIY zone with guided instruction to create various functional items such as: an automaton flying bat and a haunted LED torch – materials fees applied. 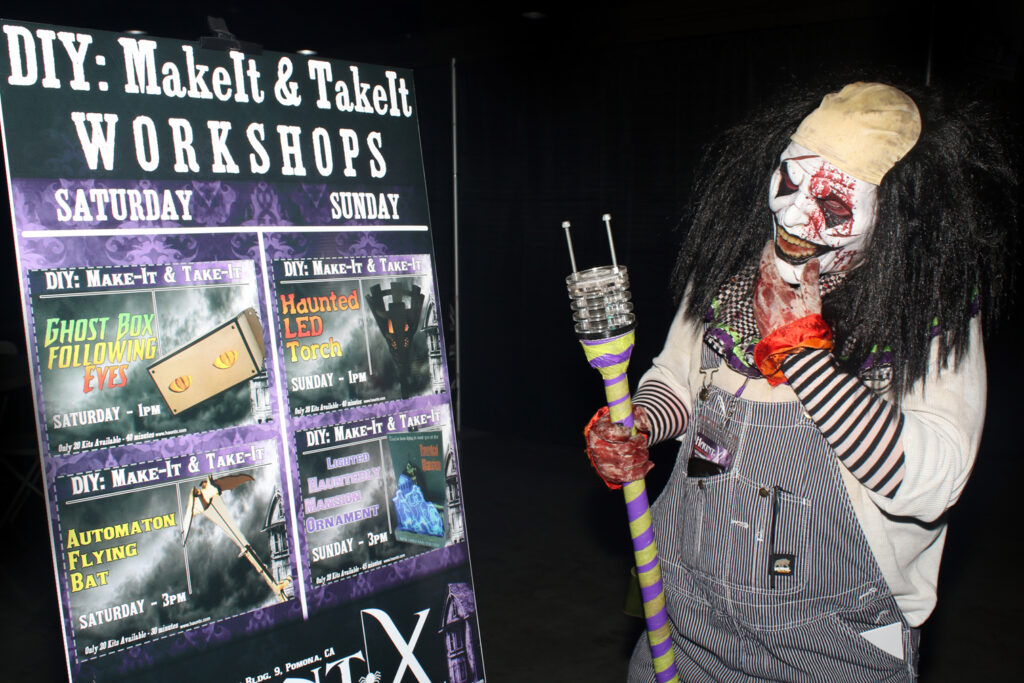 HAUNT X workshops – so many choices for the discerning ghoul.

In making my way around the convention, I spoke with numerous people about what they did, why they attended and what they thought of the event. Brett Coble (@coble_haunter), who presented the panel on dark rides, had a very elaborate display table, complete with interactive video monitors – each of which showcased a part of his process in designing and manufacturing his homemade dark rides. 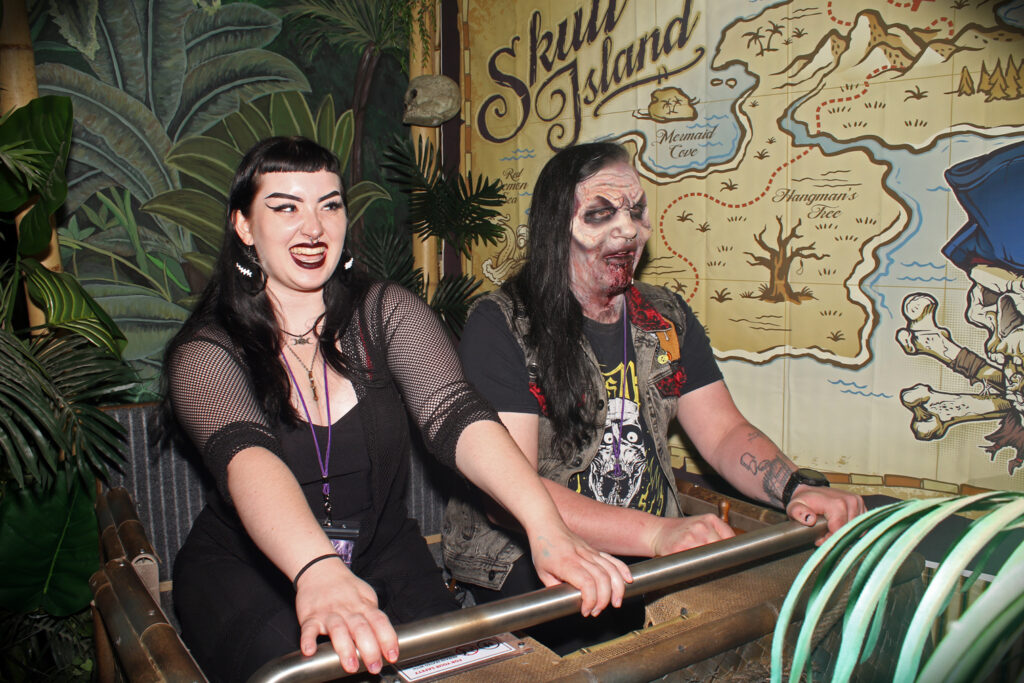 We all scream for dark rides at HAUNT X!

The Scare Squad Society (@scaresquadsociety) is essentially an agency through which local haunters can find and hire scare actors. Inland Empire Haunters serves as a network and provides basic resource information for DIY haunters in (you guessed it) the Inland Empire area. 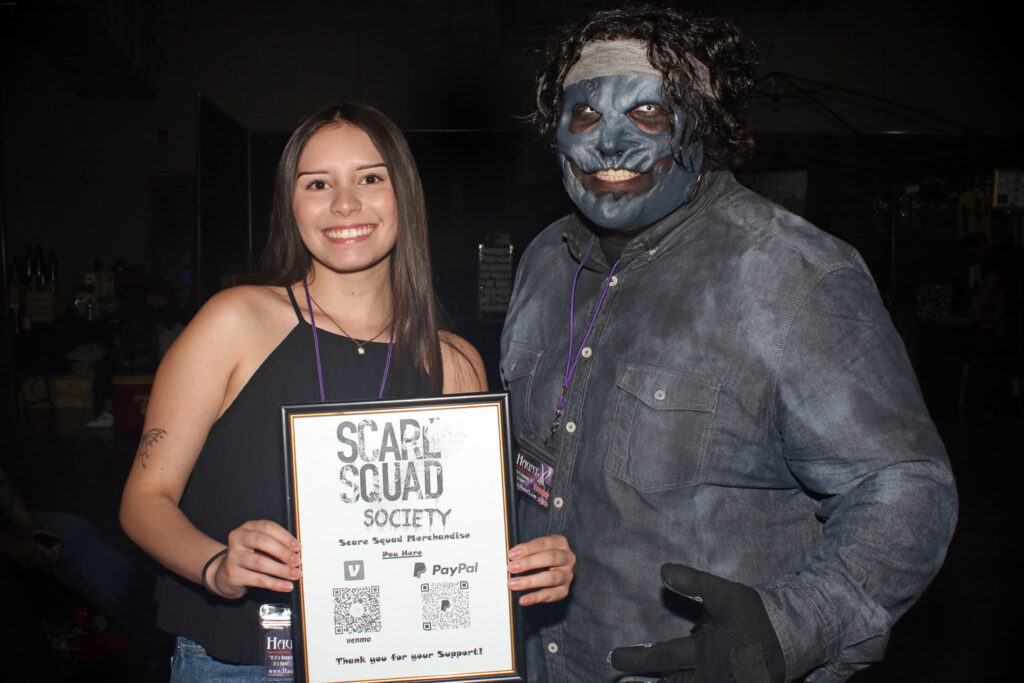 Naturally, there was a make-up demonstration at one of the stations – Bone Yard Effects, Inc., a company that designs both creatures and haunted attractions. There were also various professional cosplayers wandering about, enlivening the environment and basking in it. 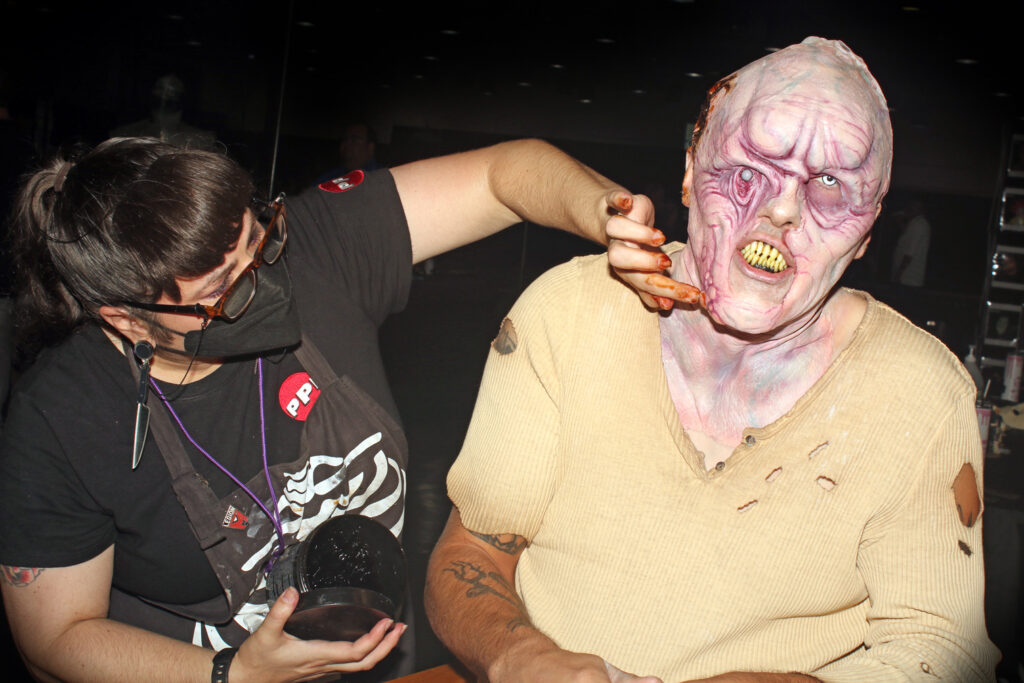 Monsters are such interesting people. A makeup demonstration at HAUNT X.

Some of the more “small business”-type exhibitors included Black Lake Witch, who sells various witch kits, books and candles in the cutest little cauldrons! There was also Owlie Art (@owlieart), who sells original cute and creepy art and jewelry and was there with her mother, who runs her own pastry business. 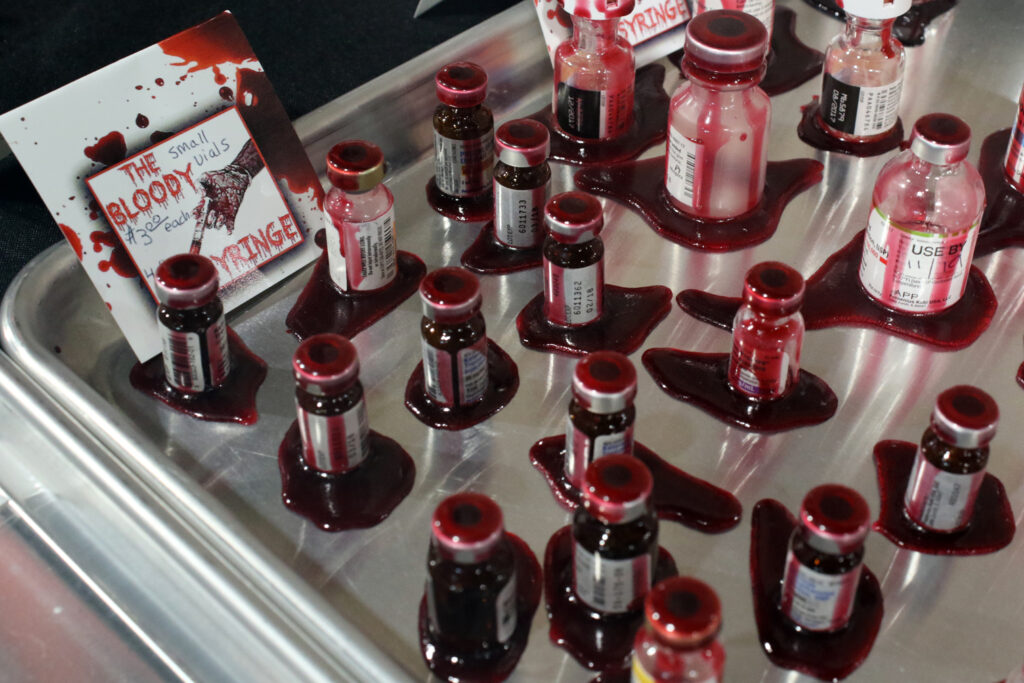 Some of the gruesome wares for sale at HAUNT X.

The main takeaway from the experience, which was cemented in a discussion with event DJ Raven Tremblay, is that all of the vendors and presenters share a sense of family with one another. Nobody is in this game to get rich, and there was certainly no glamour in having to set up their stations early in the morning – before the venue owners turned on the air conditioning – or pay $4.31 per bottle of water (for those that didn’t bring their own). But haunters gotta haunt, so they will continue to terrify and delight anyone who wanders into their midsts.