Interview: Getting “DEPRAVED” with Larry Fessenden

Depraved marks Larry Fessenden’s return to the director’s chair following 2013’s Beneath. In his latest feature, Fessenden gives a contemporary spin on the Frankenstein tale, just as he’d updated the vampire film in Habit (1995), taking the Gothic trappings and setting to modern day Brooklyn and New York, and with a doctor, Henry (played by David Call), whose ambition to reanimate the dead stems from his failure to save lives while working as a field surgeon overseas. Here, the director speaks about the new movie, the monster, Adam (portrayed by Alex Breaux), and the themes that drive him forward as a filmmaker.

Mary Shelley’s Frankenstein has made for a diverse range of films, from the Universal and Hammer pictures, to comedic takes like Re-Animator and Young Frankenstein. What aspects of Shelley’s prophetic tale did you want to maintain, or modernize?

I loved the iconic creature from the old Universal movies. I grew up watching those on television. I really wanted to suggest the loneliness of the creature, which is apparent in the Karloff version. There’s so much rich thematic [material] in the story that I thought was appropriate to modernize. The idea of the doctor – I thought, where would this doctor have these skills, and what would push him to the edge to do the experiment? When I was first thinking of the movie, there were the wars in the Middle East, which we were just getting into, and of course, we’re still there. I thought of a field surgeon who would have the skills of Frankenstein to bring someone back to life. But then I wanted to bring the idea of someone behind him, pulling the strings, and taking advantage of his PTSD and so I developed the character of Polidori (played by Joshua Leonard) and suggested there are manipulators feeding off the talent in society. Obviously I enjoy the Hammer movies as well, and pay tribute to it in the makeup… Frankenstein always has the acknowledgement of the angst and loneliness of the monster. I wanted to look into that. We’re seeing it from his point of view. There are also my philosophical concerns. All of that I poured into this version.

“You have this idea of trying to defy death – to do what?

The 1931 Frankenstein’s influence can be seen in this movie, such as in the portrayal of the monster, as well as the poster. What other films were an influence on Depraved?

It’s funny, I just rewatched Taxi Driver, which I do every couple of months. I’m also influenced by the filmmaking of Scorsese… I grew up in the seventies, chewing on that on gritty street storytelling, like in Taxi Driver. But I was always very fond of old horror tropes. I kind of had been making that my mission, to blend these two things, old horror classics like The Wolfman, and seeing it through a much more contemporary lens, and filming it with the rich colors, the lights of the street… the naturalistic acting… that makes you feel in the moment.

In the 1931 film, it’s lightning and technology that cause Frankenstein’s monster to come to life, with dire consequences. Here, it’s Big Pharma.

If you notice in the imagery, there’s [still] a lot of lightning. That’s my acknowledgement that we may not be using that trope anymore, but it’s still there in the story. And as you know, Mary Shelley didn’t deal with lightning. She was very light on her explanation on how the monster came to life.

I’m curious about the science in Depraved. The movie has a neat digital effect that tries to show the brain activity of Adam as he develops, or regresses, based on how much education or drugs he’s taken – what research into neuroplasticity or brain science did you do to prepare the script?

I’ve read books by Oliver Sachs over the years in which he realizes the physicality of the brain affects your experience of life, and your personality. I read a book by Jill Bolte Taylor, who’d had a stroke, and in it, chronicled the reconnecting of her synapses. All of that was important to me… how personality and identity are based on the physical neurons that are firing in the brain. I [also] researched the drugs used to potentially keep a creature like that alive in the film, the psychological drugs used to calm the creature down… I did some research that I showed friends in the medical industry and they said it made a certain amount of sense. 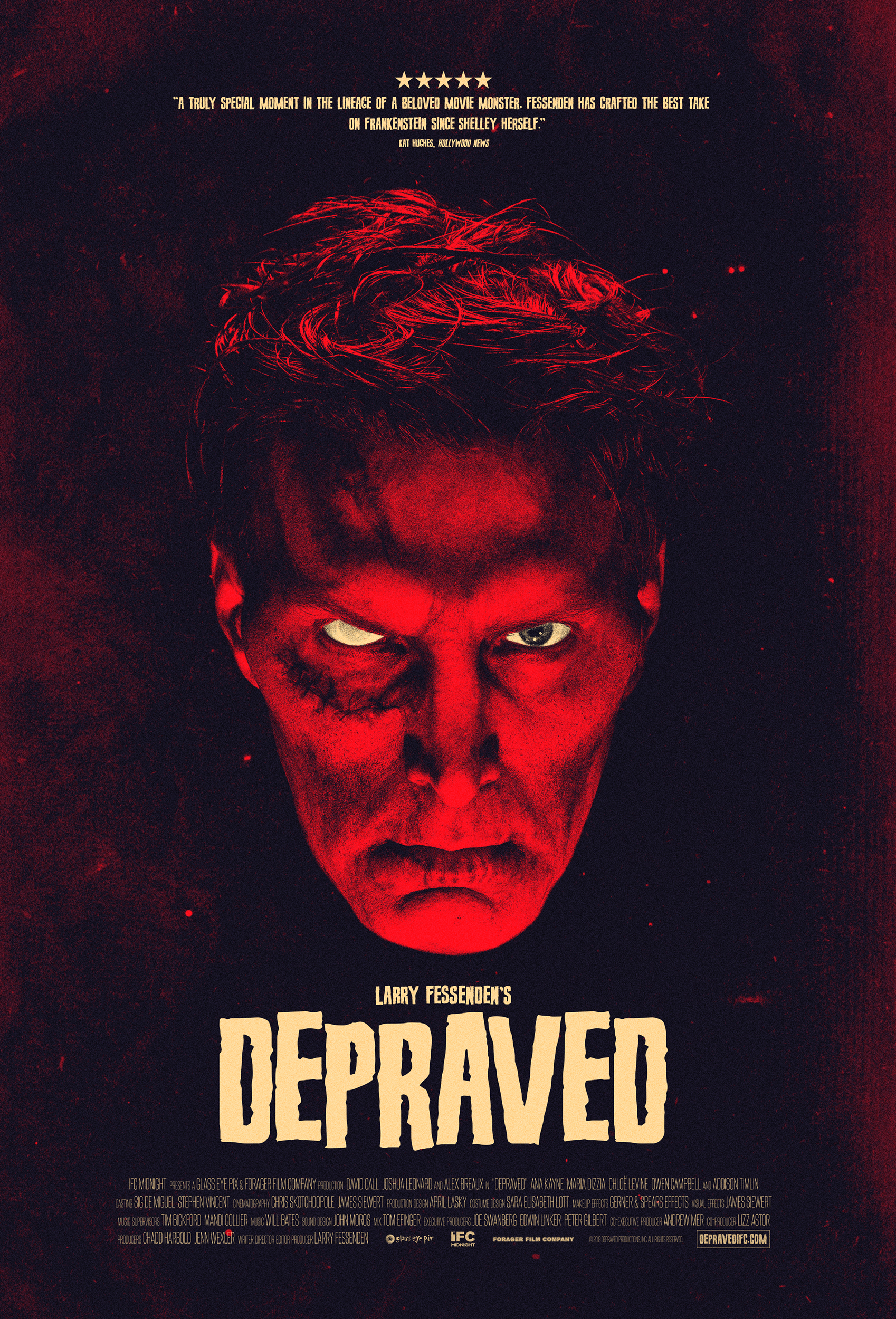 One of your earlier films, 1991’s No Telling, also deals with the ethics of experimentation – what are you drawn to about the mad scientist story, and what was your aim with Depraved?

I see a moral dimension in all of these stories, and really, any kind of movie of any worth is going to be talking about how society works… You have this idea of trying to defy death – to do what? If we had miracle drugs, and everybody lived, what would be their quality of life? I wanted to talk about how damaged this great talent was after the war. I wanted to talk about how we treat our veterans’ inability to re-integrate in society… I’m not really making a stand but I want the viewer to think about those things… That’s the fun thing about making horror films. You deal with bigger issues in a way that is accessible and fun, visceral, and impactful.

The movie has a neat urban aesthetic – the large loft space brings to mind The Fly, for instance. When you’re filming in New York, what qualities of the city are you trying to capture?

The lights and colors of New York City are so delicious. The reds and yellows…the colors of the city are really potent. I like those rich colors, and I contrast that with the lab; the whites, silvers, and blues, which are more clinical. Also, the blood’s going to show up nicely there. So you create a palette. You mention The Fly, which is one of my favorite movies, and [also] has the physicality of science on the screen… The themes of films in those days were about AIDS, and how we deal with disease – once again, taking a classic horror trope and infusing it with concerns of the modern day.

“I think we’re completely depraved and narcissistic and I think that will be our undoing.” 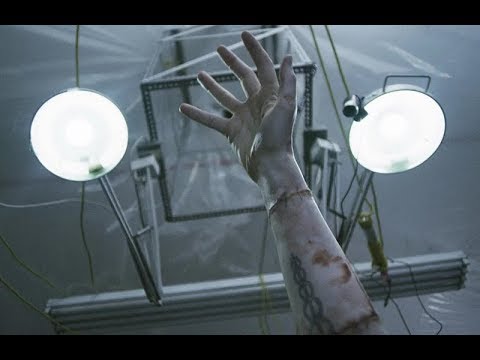 Alex Breaux does a great riff on Karloff in the film, and gives a pretty great physical performance – there’s a development to how he moves and develops the capacity for speech – how did the two of you collaborate to find the right nuances for that character?

We started early, which is not a luxury you have with a low budget film always. Alex was just a very precise, thoughtful actor, and he knew the assignment… We talked about the idea of going from being a child… and about at what point in the story when Adam, the monster, is grasping language, how he would speak – what vowels and consonants are easier to use at first. We were tracking the physicality, the language, and the emotion. He would have done his homework and I would modulate as I saw fit, and we had a fun rapport. I also showed him a movie called Frankenstein: A True Story – that was a more unexpected reference, and he took that in. There’s a lot of fun and responsibility when you’re playing Frankenstein’s monster – it’s like playing the Joker, you’re an icon.

Joshua Leonard’s character of Polidori takes Adam on a tour of the MET, in which he cites humankind as being “depraved.” What’s your philosophy on the state of our species?

I think we’re completely depraved and narcissistic and I think that will be our undoing; our complete self-involvement at the extent of the natural world – that will catch up to us and lead to our demise in one way or another. Our president down here is a perfect example of this kind of self-obsession, disconnected from the realities and also the aspirational aspects of the human creature, leaning toward empathy and ethics and building a good society… I feel like it is weakness of character that leads to this self-involvement. I developed Polidori’s character who doesn’t have the talent of Henry, but has a wily ability to manipulate people… [In the film,] he’s not being mindful of the creature’s betterment. So that’s my critique of society and humanity. Polidori’s smart enough to know that he’s depraved. And there’s no way out for him, as a small-minded person. I think it’s a parable for our times.