Game Review: Go in for the kill with “DREAD X COLLECTION: THE HUNT”

One arctic research base. One breached virus. Seven developers. That’s right… it’s time for another DREAD X COLLECTION from publisher Dread XP.  Featuring an in-depth launcher courtesy of Nate Berens (CELLULAR HARVEST), DREAD X COLLECTION: THE HUNT unites an excellent group of indie horror titles that are more than worth trekking through an arctic tundra to unearth.

DUSK developer David Szymanski has stepped in as a director for THE HUNT, having previously been featured in the first two collections with THE PONY FACTORY and SQUIRREL STAPLER. As this game’s subtitle indicates, the theme here is hunting, presented in the form of seven shooters – though not all containing typical firearms that one may expect. 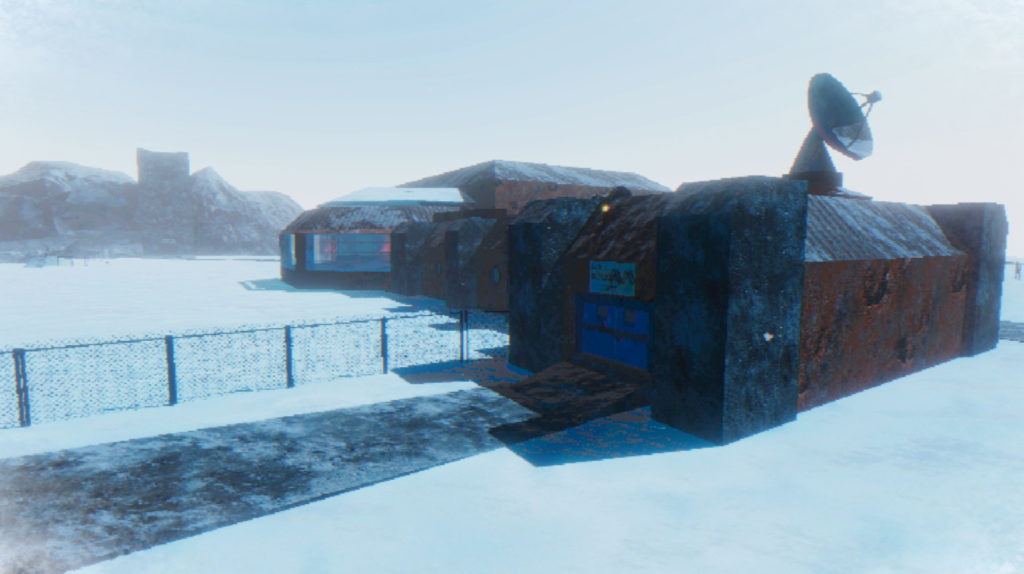 Players begin the collection as Artemis, a tracker who arrives at the desolate ARK 2 research base after being contacted by a scientist in desperate need of her abilities. Though you’ll do a decent amount of puzzle-solving to piece together the events that lead to the outbreak of the mysterious “cognitovirus,” this game-within-a-game juxtaposes the role of the hunter found in many of its other titles when it becomes clear that someone – or something – is tracking down Artemis as well.

The ARK 2 setting is clearly an homage to John Carpenter’s THE THING, though it’s still unique enough to be its own thing. Neat references to that film and each individual game can be found scattered throughout its sprawling environments, and players will likely have just as much fun navigating its frozen, blood encrusted halls as diving into the each of the collection’s games themselves. 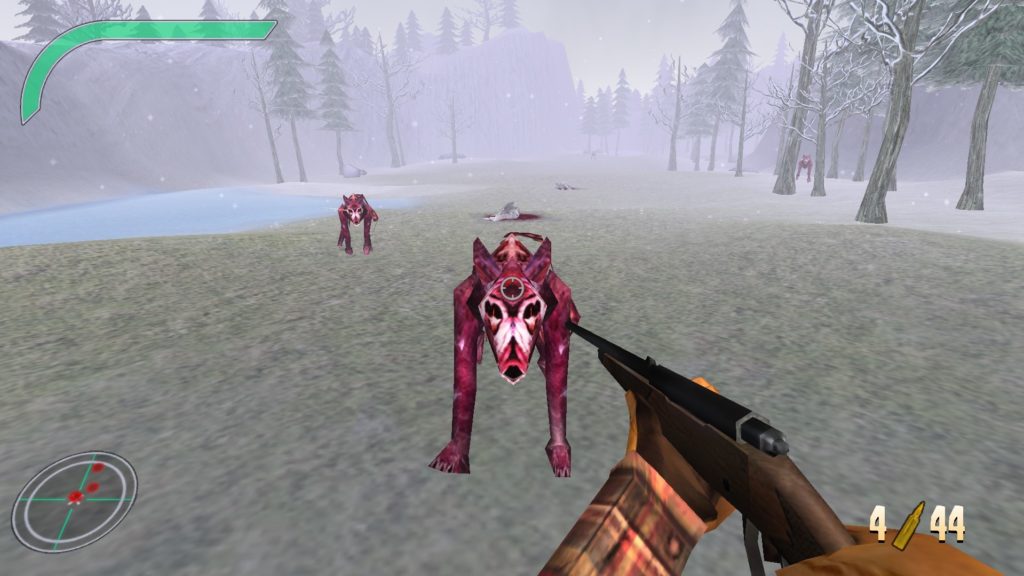 Already renowned for their indie horror classic LOST IN VIVO and crafting DREAD X COLLECTION 3’s colourful launcher, developer KIRA’s contribution here is UKTENA 64, a Nintendo 64-inspired hunting simulator that’s heavy on oddball humour and visual flair. As lovable backwoods hunter Jebediah, players face-off against mutated turkeys, wolves, and much more throughout the game’s numerous levels. With the proper CRT monitor and filters enabled through the menu, UKTENA 64 is easily passable as an actual title for the retro gaming console, and its loading screens and menus will instill heavy nostalgia for any horror gamers that grew up playing the TUROK series. 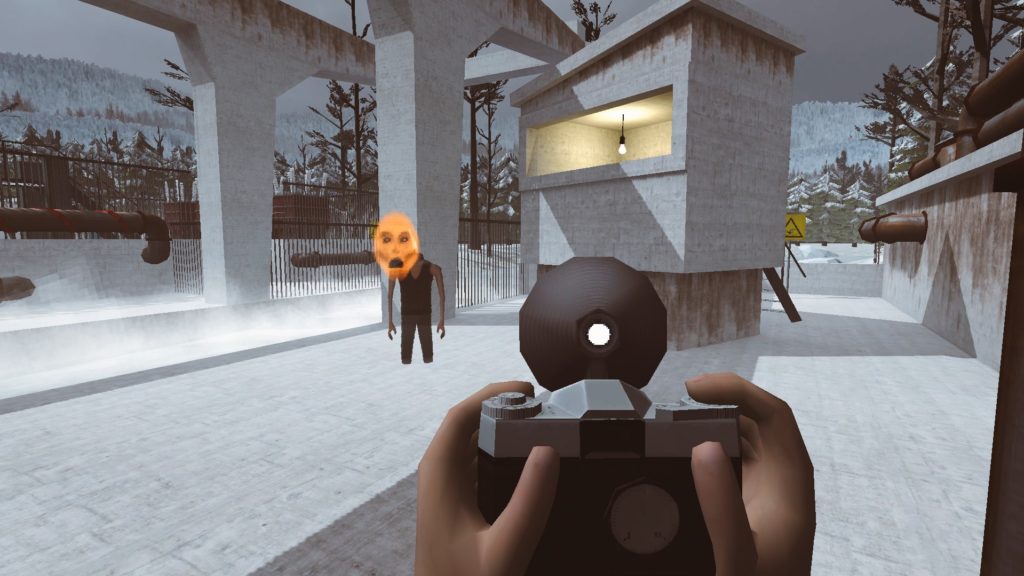 AXIS MUNDI from Philip Hesselback sees a paranormal investigator sent to a haunted shopping mall to rid the building of its unwanted supernatural tenants. Armed with only a camera, its FATAL FRAME-esque gameplay is a lovely change of pace from the standard shooter formula, and its time-travelling element allows for some distinctive locations and puzzles. Thanks to some wonderful narration, the game is sure to tug on players’ heartstrings as much as it’ll scare them silly. 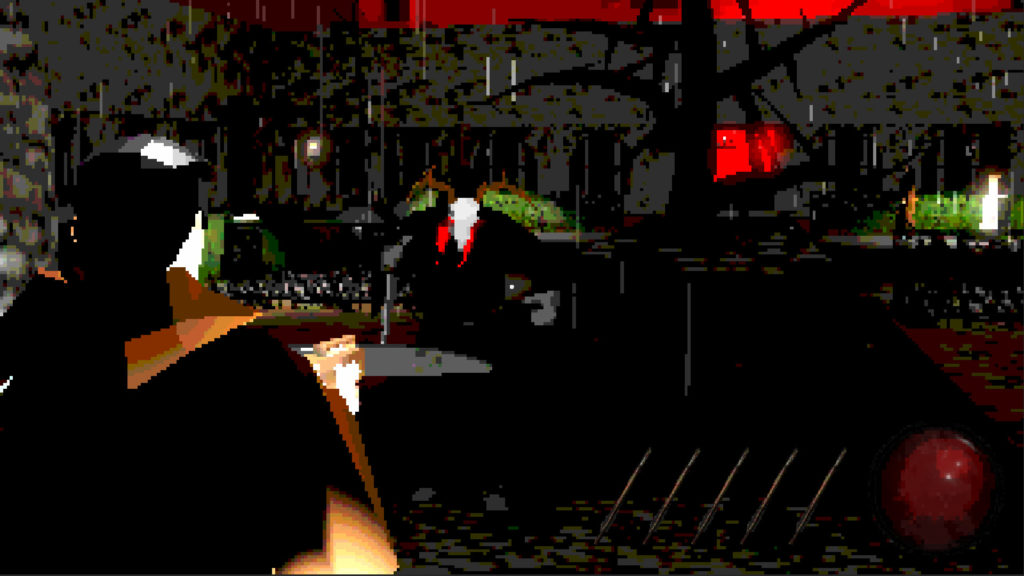 Returning for their fourth DREAD X COLLECTION entry is Torple Dook (HAND OF DOOM, CHIP’S TIPS) who contributes BLACK RELIC, a heavily pixelated survival horror third-person shooter. As a monk known as Brother Silence, players load up their crossbow to track down the titular relic that has vanished from its sacred resting place. Expect some very tense gameplay, as slowly reloading and gathering bolts while dozens of cultists encroach donning deer skulls is sure to make even seasoned horror veterans sweat.

Mr. Pink’s ROSE OF MEAT is a surrealist nightmare, as difficult to describe as last year’s GOLDEN LIGHT. What begins as an afternoon of fishing is soon interrupted by a giant hand of raw flesh, pulling the boat into the watery depths – or maybe a different dimension entirely. It’s hard to say, really, as players are then stranded on a bizarre island that’s home to a woman named Rose who gifts you a shoe complete with a sentient leg of meat attached. Aside from an actual revolver, you’ll wield the leg to spawn abstract fleshy companions capable of healing and detonating enemies thanks to explosive barrels they possess as part of their grotesque form. And if nothing I just wrote made a lick of sense, that’s fine. Just rest assured that as with GOLDEN LIGHT, there isn’t really anything else like ROSE OF MEAT out there. 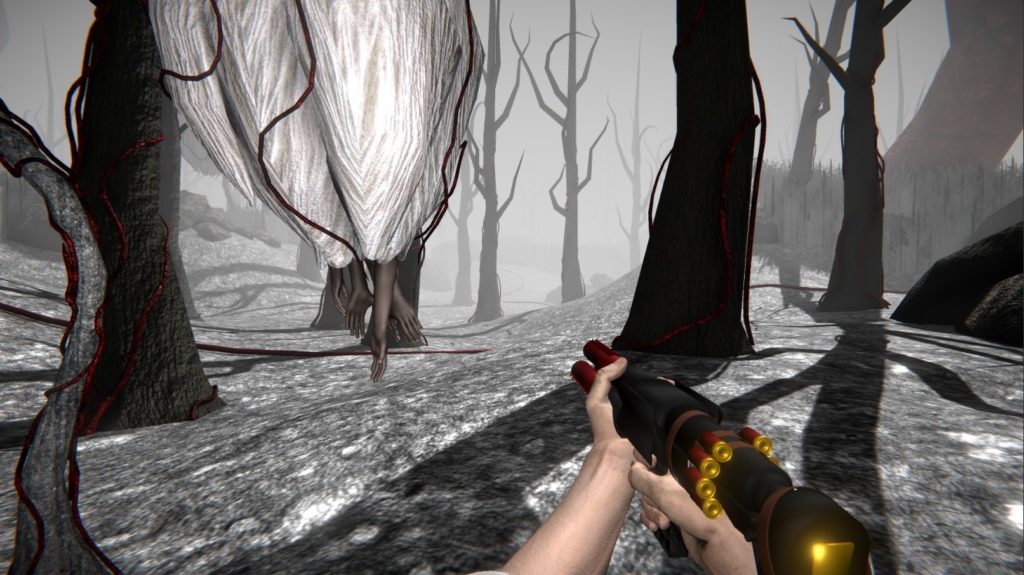 SERAPHIXIAL by Vidas Games and featuring TBF Games and Abbey Smith is another freakish excursion into the unknown. A father in search of his daughter is brought to what appears to be a fairly regular submarine. However, after entering the vessel, he’s transported to a different reality. With its striking visual style that extends from its mostly monochromatic colour schemes, unconventional weapons, and unsettling creature design, SERAPHIXIAL is the most overtly psychological game to be found in the collection. Enemies resembling giant daisies with severed feet attached, anyone? Yikes. 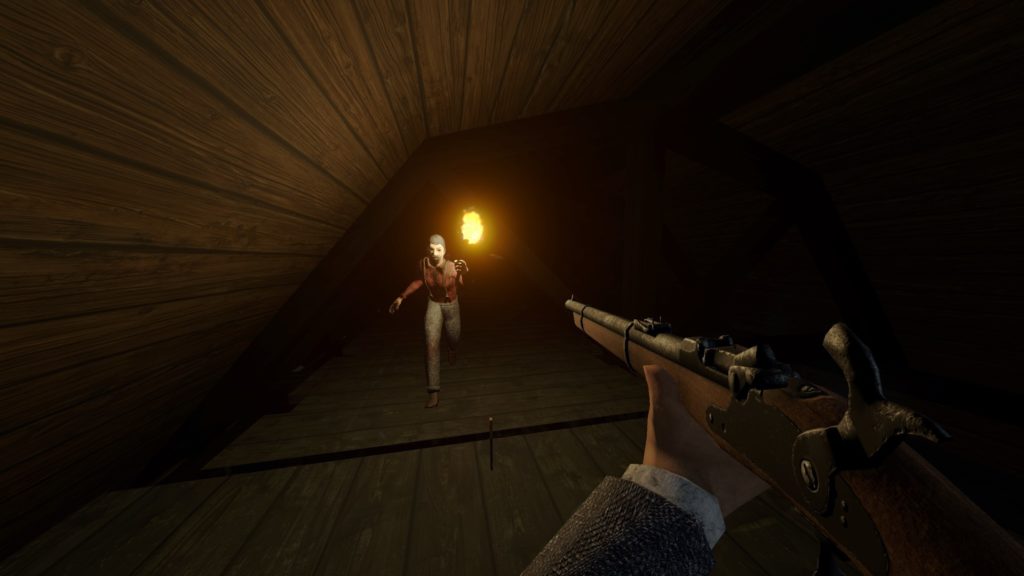 Christopher Yabsley’s THE FRUIT is perhaps best described as an unholy fusion of the AMNESIA games’ aesthetic sensibilities and THE ELDER SCROLLS: SKYRIM’s dragon shouts, presented here as ancient and sinister words of power. Travelling to the remote village of Ravenshollow after being contacted by his missing partner, protagonist Thomas Whittaker finds that much of the town’s inhabitants have been driven mad after consuming a strange “fruit.” As in the aforementioned BLACK RELIC, reloading is incredibly anxiety-inducing as players have to eject and reload each bullet one at a time into a late 19th century rifle. With the least retro-inspired look to be found in the collection, THE FRUIT leaves a lasting impression thanks to its atmospheric setting and extremely foreboding sound design. 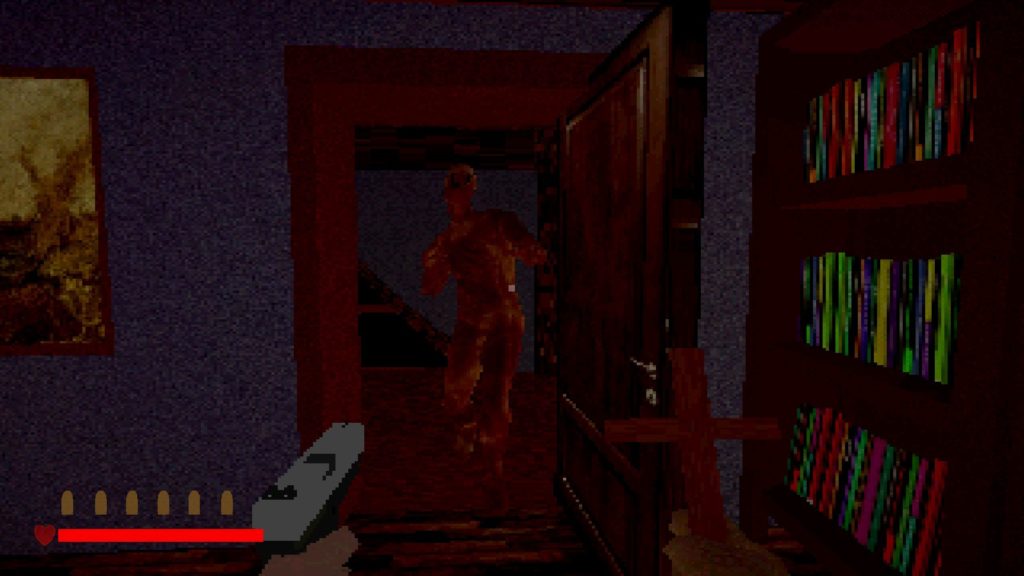 Lastly, Dan McGrath’s THE HOUSE OF UNREST serves up a classic religious horror archetype, though with some fresh twists. As a priest sent in to clean up an unfortunate accident involving another Man of the Cloth dabbling with rituals beyond his comprehension, players cleanse the house of unholy growths, shambling faceless foes, and a demonic entity known as “Asakku.” With a crucifix capable of firing laser beams of holy light and a trusty pistol, the demon-hunting priest is given a vast mansion and its grounds to navigate before a stunning final showdown against evil incarnate.

With the intention of fleshing-out a smaller number of indie horror games this time around, DREAD X COLLECTION: THE HUNT triumphs most by widening the spooky scope of the worlds contained within. Tack on the most satisfying and narrative-rich interactive backdrop found in the anthology series as of yet, and you’ve got the makings of a future classic.

Dread X Collection: The Hunt is out now on Steam. Review code provided by the publisher.