From the T-Virus to Molded: A “Resident Evil” Game Retrospective

The Resident Evil game franchise from Capcom, much like its zombies, refuses to stay dead. Just when you think it may be gone for good, a new game comes along and the franchise resurrects itself and shambles onward. After scathing reviews of Resident Evil 6 and the barely noticed release of Revelations 2, it seemed the brand was on its last leg…and then Resident Evil 7 came along to save the day, riding on its disgusting fungus monster that breathed undead life anew to the game. Today the franchise is going strong and with the announcement of a complete remake of RE2, fans’ excitement doesn’t look to be abating anytime soon. To celebrate the upcoming and highly anticipated RE2, we’re looking back on the entire Resident Evil game franchise to call out the good, the bad and the bad ass… 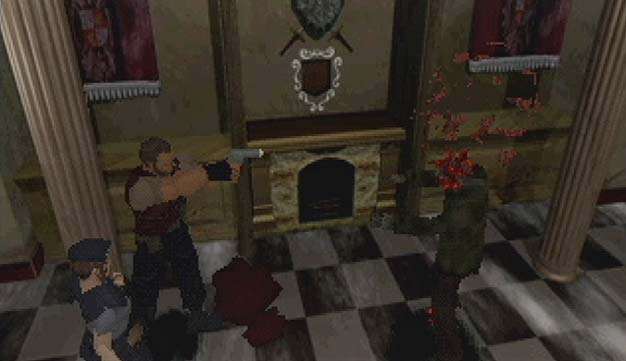 The game that started it all; eventually it became available for PS1, Windows, Sega Saturn and Nintendo DS. RESIDENT EVIL has since been re-mastered TWICE and is available up to the Wii and PS4. It follows Jill Valentine, Chris Redfield, Albert Wesker and Barry Burton on July 24th, 1998 as they head into the Arclay Mountains to find the Bravo team of S.T.A.R.S., an elite group of officers for the Raccoon City Police Department. Our characters are the Alpha team that is in search of a previous team that went missing while investigating disturbances. What they find are Cerberus dogs, the Spencer Mansion and a lot of undead humans and mutant creatures.

When this game came out, I was merely a child and the graphics for the time were pretty mind blowing. Polygon dogs and zombies scared me into throwing the controller at my dad at the slightest groan (which was unfortunate considering all controllers were attached to the console at the time). The re-mastered version changed very little (the change in music was as disappointing as the soundtrack was great), improved the graphics considerably and added content and map locations. It is still one of the best in the series. 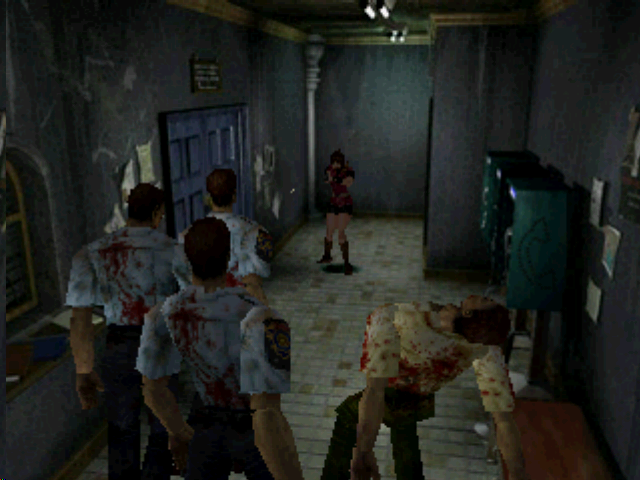 The second in the series was available on PS1, Windows, Nintendo 64, Dreamcast, and Gamecube. Graphics improved slightly from the previous game, but they still had the classic Capcom clunky controls meant to ramp up the tension and the horrific camera angles. RE2 followed two new characters: Claire Redfield and Leon S. Kennedy Claire came to Raccoon City in search of her brother and it’s Leon’s first day on the job at the Raccoon City PD, only to have a zombie apocalypse break out on the same. Bad luck, if you ask me. 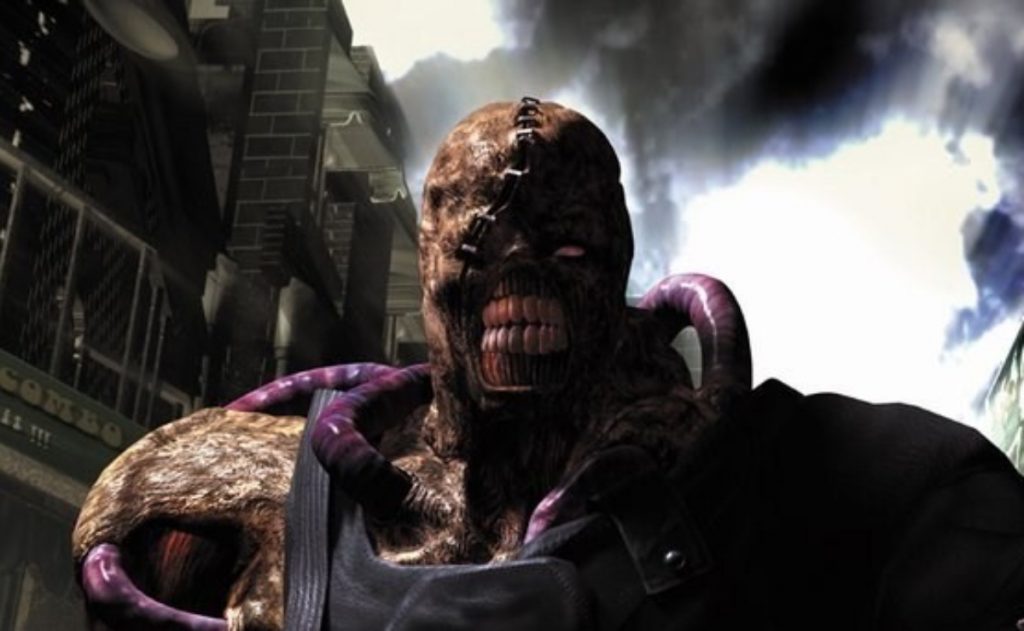 Ah, enter one of my favorite RE villains of all time, Nemesis. Easily the coolest character in the franchise…the game franchise anyway. The movies, while they stayed true to the visuals, gave Nemesis some BS backstory that ruined the whole thing. Nemesis was the product of the G-Virus, where the mutant Tyrant from the first game was the product of the T-virus; he was massive, strong and only knew one word: “S.T.A.R.S.!!!”

RE3 happens simultaneously with RE2. While Claire and Leon are fighting for their lives on the night the outbreak reaches the city, months after the first game, Jill Valentine is back with help from Umbrella soldier Carlos Oliveira to find a way out of the city before it is neutralized, a.k.a big ass bomb. This installment was released on PS1, Windows, Dreamcast and Gamecube. 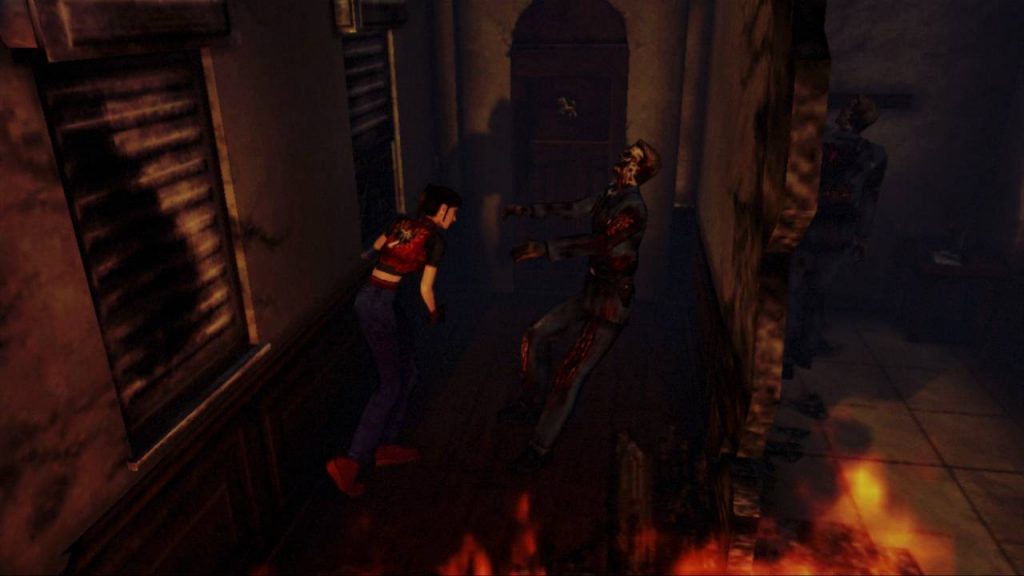 This is where it started getting a bit strange. Three months after Raccoon City is cleansed of the virus, Claire is in Europe searching for her brother. She is brought under arrest by Umbrella and sent to Rockford Island prison where there is an outbreak of the T-Virus. Claire receives help escaping and finds another inmate called Steve Burnside to try and get off the island. There, they come up upon bat shit cray Alfred Ashford and it gets weirder from there.

This still clunky game was released on PS2, PS3, Dreamcast and Xbox 360. It had a later adaption (along with RE2) for Wii in an arcade-like style. 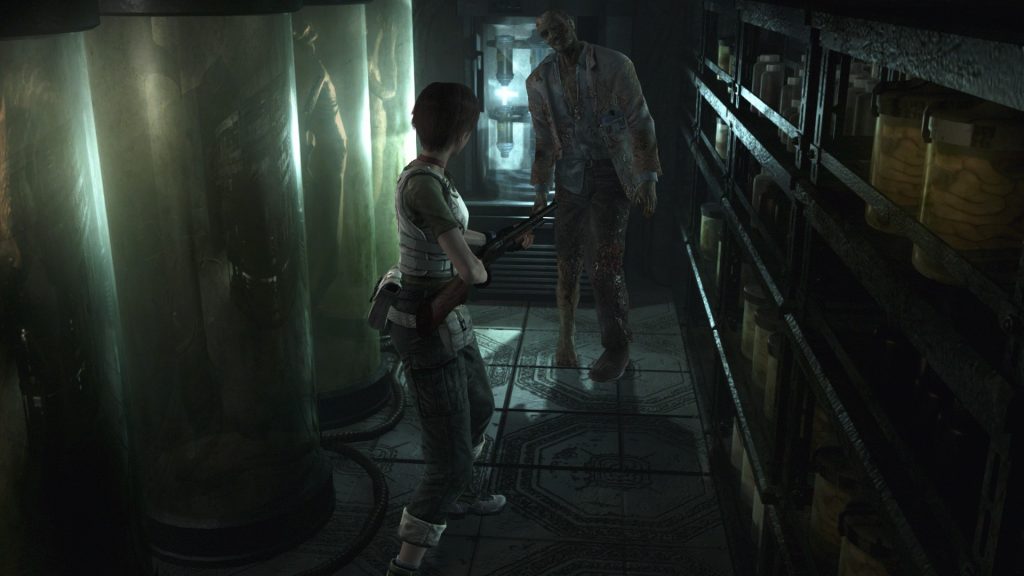 Meant to act as a prequel to the first Resident Evil game (taking place July 23rd, 1998), RE0 focuses on the Bravo team that went missing and their journey to where they ended up on the grounds surrounding the Spencer Mansion. The lead is Rebecca Chambers, rookie member of S.T.A.R.S. at 18 but a fighter that makes it to the end (unless you do it wrong) in RE1. This game included some different inventory mechanics but was otherwise underwhelming. It’s available for Gamecube, Wii, PC, PS3, PS4, Xbox 360 and Xbox One. 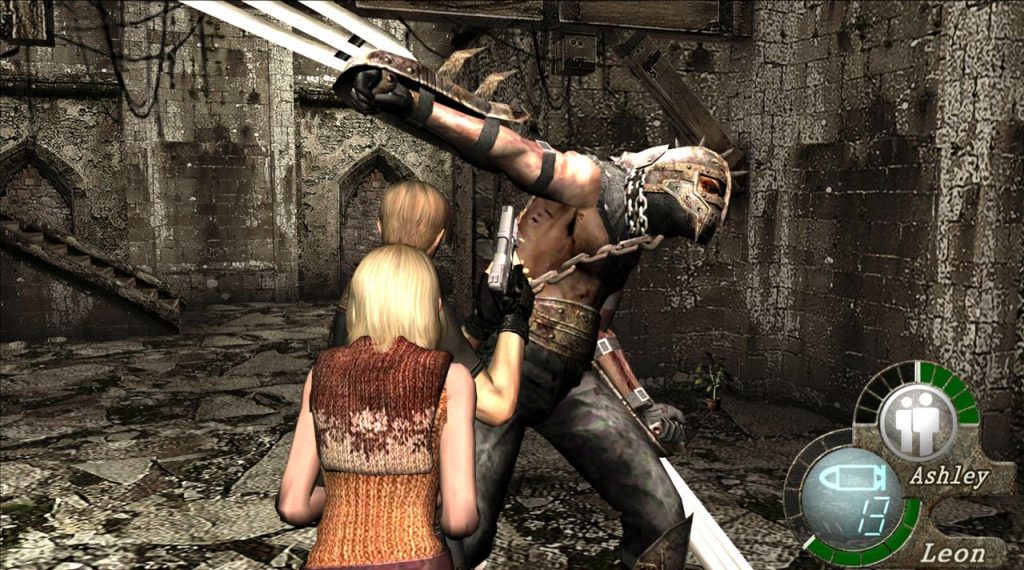 Widely regarded as one of the best in the entire series to date, RE4 follows a much more seasoned and sassy Leon S. Kennedy as he heads into backwoods Spain to rescue the president’s daughter, Ashley, who has been kidnapped by a cult called Los Illuminados. The villagers are infected and violent with a new virus created by Las Plagas, a parasite that allows mind-control. This game introduced quick time events and the element of a third-person shooter more than a survival horror. It was here that the foundations were laid for where the next four games would go.

RE4 introduced the most annoying character in the entire series, Ashley Graham. She is completely useless and it is easier to shove her in a box to go on your merry way, clearing out the path and then going and get “Useless” Graham before moving on. This game is available on PS2, PS3, PS4, PC, Wii, Xbox 360, Xbox One and Gamecube. 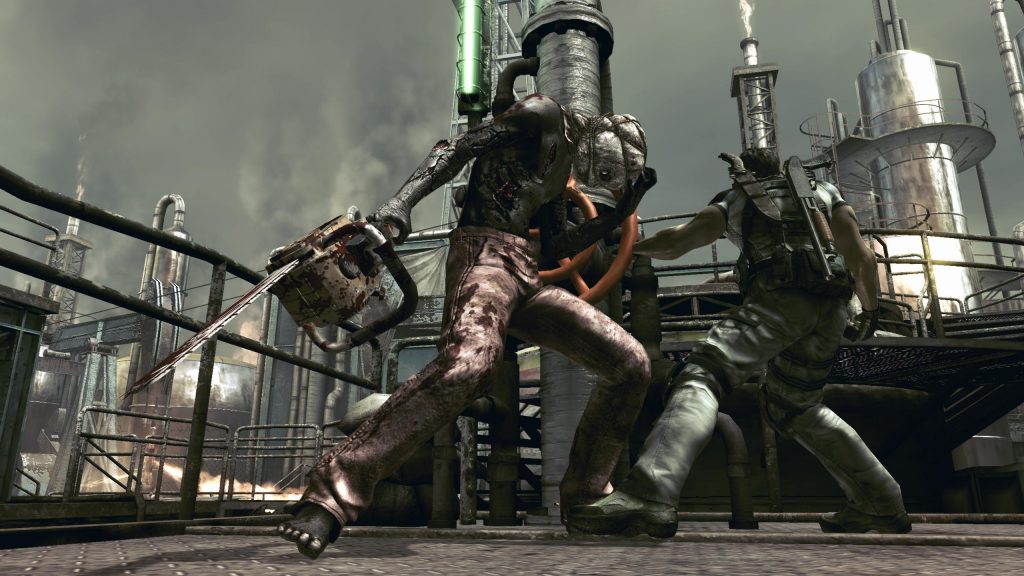 RE5, how I love thee, let me count the ways. This is one of my favorites despite the flak I receive from it. This installment transferred the game completely to third person shooter, changing the tone of the RE series. RE5 introduced the first couch co-op option to the series which allows you to play with a friend in split-screen. While it had its downfalls (too many quick time events, inability for second player to do basically anything with the inventory) it is a game close to my heart. It is available on PS3, PS4, Xbox 360, Xbox One and PC. 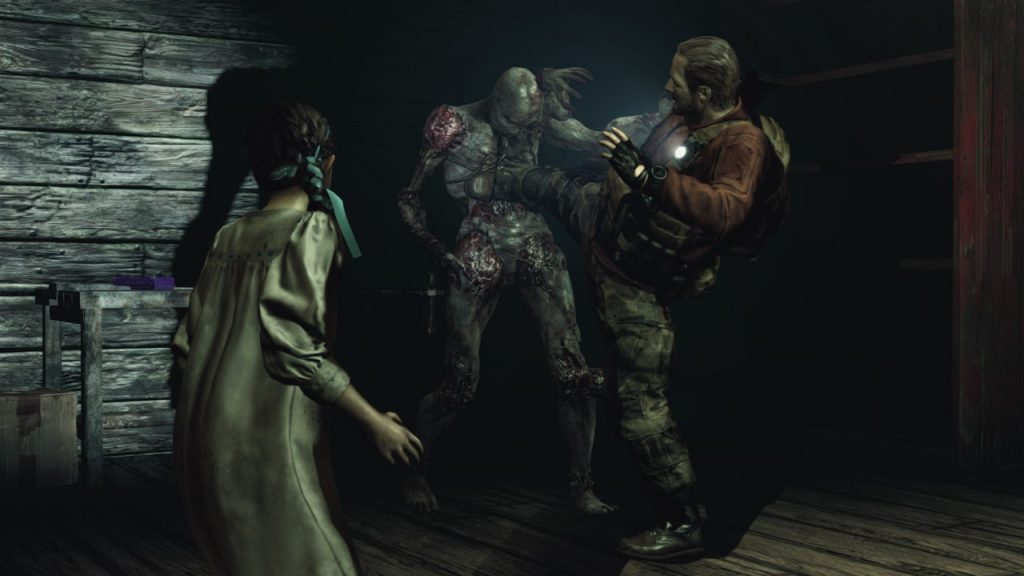 These two side games are ridiculously fun. Revelations 1 follows Jill Valentine and Parker Luciani aboard a ship named the Queen Zenobia as they search for Chris Redfield and Jessica Sherawat. Revelations 2 follows Barry Burton, Moira Burton, Clair Redfield and a little girl named Natalia. As Claire and Moira, you fight to escape an island you were kidnapped to and Barry searches to find his daughter. Both are immensely fun games and couch co-op. They are available on PC, PS3, PS4, Xbox 360, Xbox One, PS Vita and Nintendo Switch. 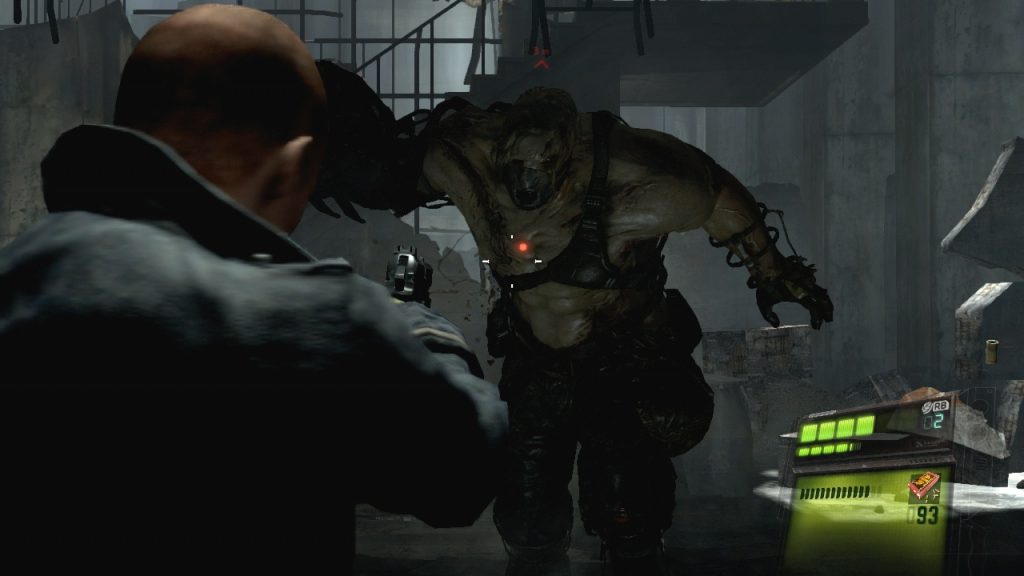 One of the most hated installations to the franchise, RE6 was the most shoot-filled and has the most quick time events of the entire series. I personally enjoyed it because I got to play multiple stories involving Leon S. Kennedy, Chris Redfield, Ada Wong, Jake Muller and Sherry Birkin – it’s a full-fledged family reunion here. Of course, it follows the same story: bio-terrorists from Neo-Umbrella are threatening the world with the C-virus and a new breed of mutants called J’avo that can intelligently fight back and it all goes down in China. The stories were really engaging and all but Ada Wong’s playthrough were fun to play with a partner. This game is available for PC, PS3, PS4, Xbox 360 and Xbox One. 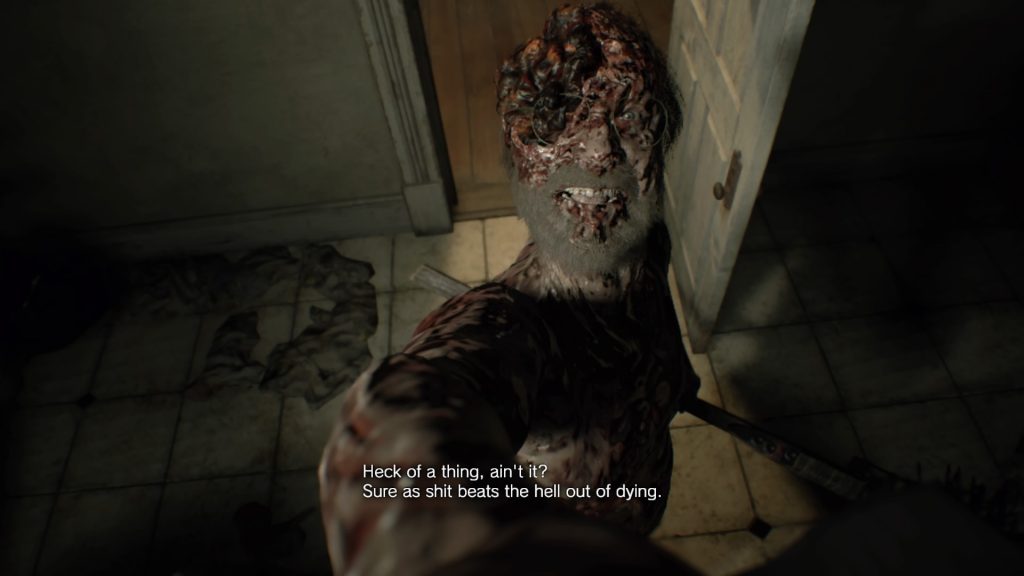 This is when the games took a turn back to their roots and became popular again. Capcom decided to make a hard left with their gameplay and story line. Instead of the standard over-the-shoulder third person horror shooter, RE7 returned to first person true survival horror. Supplies are limited, you aren’t a great fighter and sometimes running is the best thing. You play as Ethan Winters who heads to the swampy south to find his wife Mia who has been missing for three years and he suddenly gets a video from her. When he gets to the place she was last seen, he has to fight of a crazy family infected with a weaponized form of a super regenerating fungus and a long series of created monsters called Molded.

RE7 has a new and different feel but makes sure to make it feel like Resident Evil towards the end of the game giving some good fan service. While the game leaves a lot of questions since it is tied to the old games, but we don’t really know how yet, it is immensely fun and terrifying. RE7 is the first full game on Capcom’s in-house engine but it won’t be the last. It is also fully supported by VR and if you haven’t played it in VR, I highly recommend it. Get your brown pants ready.

This brings us full circle. At E3 2018, Capcom announced that in just a handful of months, we are getting not a remake but a full reimagining of Resident Evil 2. With the gameplay and gore matching RE7 more than the original, the game looks scary as hell. Just the little bit of gameplay that has been shown has convinced me that I will not be playing this alone. It releases January 25, 2019 for PC, PS4 and Xbox One.

An honourable mention goes to Resident Evil: Operation Raccoon City. Some people think the game is fun but it strayed so far from the RE story, aesthetic and gameplay that it barely counts. Personally, I cannot wait what Capcom has in store for the future of the series. Rumour has it they are open to more re-imaginings of past games. Who knows, maybe someday we will have a new Dino Crisis, but as a huge Resident Evil fan, I am happy for any new game they throw my way.