Form and Void: The Evidence Wall in “TRUE DETECTIVE”

Even casual viewers of detective TV shows and film will recognize the “evidence wall”. Scenes in which overworked investigators peer at a wall covered with loose pieces of eyewitness sketches, names, photos and newspaper clippings, all adding up to a big riddle whose threads are neatly tied with red string or chalk lines. Since Sherlock Holmes, crime dramas have made a habit of showing an ordered world – a world that makes sense if only you use rationality to add up all the clues. Detectives make it seem that complete knowledge is possible. They tell us that truth lies with those with the authority to map reason onto reality. In the first season of 2014’s True Detective, written by Nic Pizzolatto, the evidence wall is almost too big to keep track of. The threads are more like the tentacles of a Lovecraftian creature and the universe itself is the prime suspect. The show’s overflowing evidence rooms and archives are like a bureaucratic labyrinth that takes decades to figure out – if they can be figured out at all. 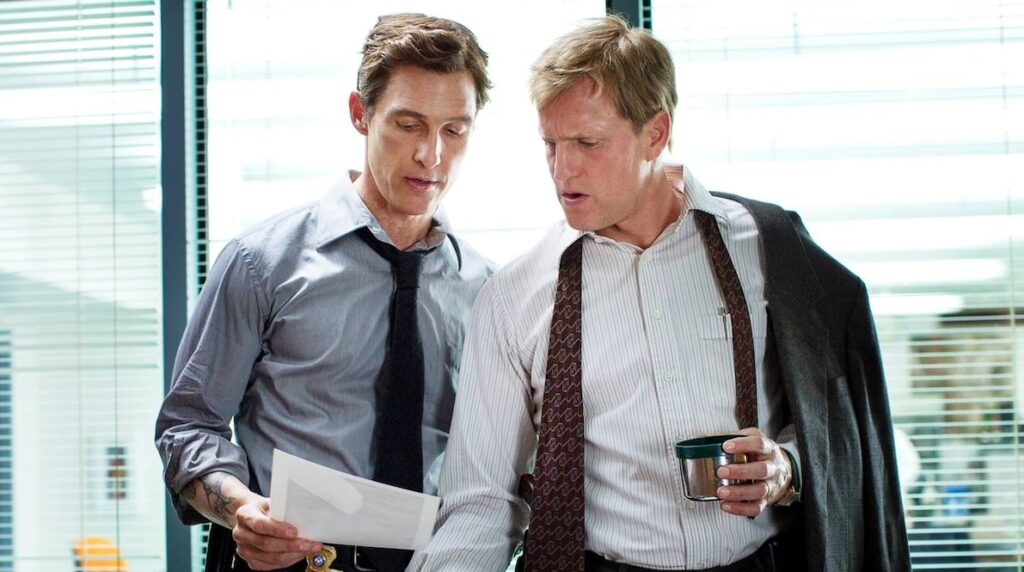 Matthew Matthew McConaughey and Woody Harrelson are looking for clues in TRUE DETECTIVE.

Part of the appeal of True Detective was how the story jumped back and forth through time. The show begins with the 1995 investigation into the cult-like murder of Dora Lange by (Amanda Rose Batz) homicide detectives Rustin “Rust” Cohle (Matthew McConaughey) and Marty Hart (Woody Harrelson). It then switches to the present of 2012, with the detectives themselves being treated like suspects. While dark and gritty, the 1995 sections seem to pretty much follow the straight line of police procedural shows. From Rust’s first notes in his ledger, the evidence builds like a puzzle waiting to be solved. The puzzle pieces are contained within the typical office space of a police precinct. The harsh lighting of such spaces reassures us that everything will be “brought to light.” Eventually, Rust and Marty reach a solution, shooting and killing Reggie Ledoux (Charles Halford). The case is seemingly closed.

However, the 2012 portions make clear that the ritual killings have not stopped. This fact is made known to Rust and Marty, as both are brought in for questioning by new duo Maynard Gilbough (Michael Potts) and Thomas Papania (Tory Kittles). It turns out the original case files have been destroyed by a hurricane. The interviews are a way to piece the archive back together from the depths of memory. The statements Rust and Marty give (in an office filled with boxes of old files and obsolete typewriters) shape the story of the show. Clearly, one of the show’s major themes is the problem of archiving and its connection to the act of storytelling.

By this time, both Rust and Marty have cut their official ties with the police. When they decide to revisit the case – unofficially – it is because they know that they “left something undone.” Their search takes them deeper into the archives. We see more and more scenes set amid the dark recesses of administrative storage facilities, police evidence rooms and towering stockpiles of beige-colored boxes of tax records. The scraps they accumulate reveal that their own case was but a small fraction of a much larger tale of corruption and evil. Going back many years, there have been multiple murders and missing children in towns spread up and down the Louisiana coastline. It turns out the conspiracy reaches the very top tier of society, including governor Edwin Tuttle. 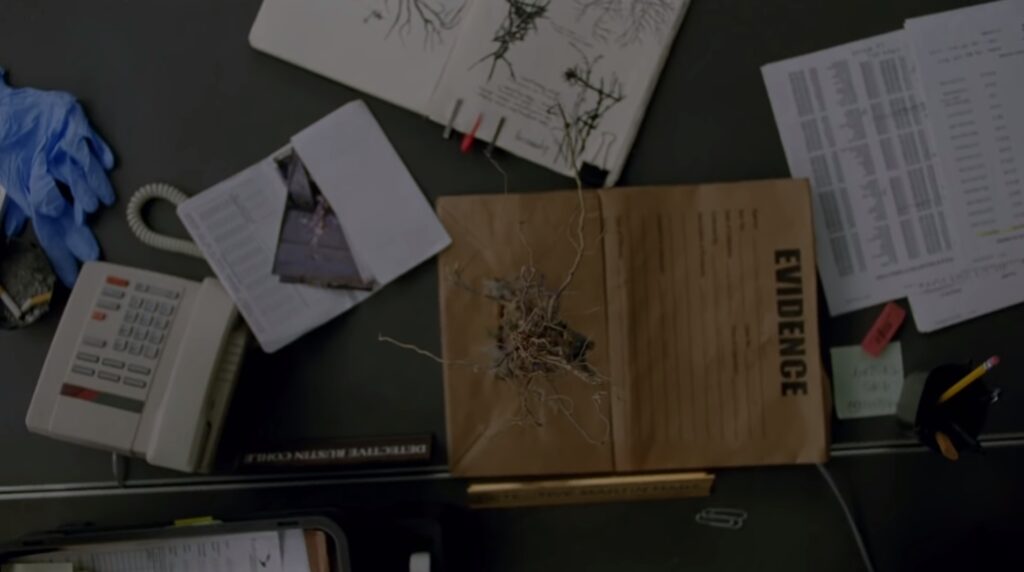 Puzzling evidence in a world of endless mysteries.

Rust and Marty’s evidence “wall” fills an entire storage unit. It takes over Marty’s business offices as a private investigator and even spills into their homes. The mass of clues feels like too much, too overwhelming, the conspiracy too large. Characters make mysterious references to Carcosa and the Yellow King. Many horror fans picked up these allusions to the weird fiction of Ambrose Bierce, Robert W. Chambers and H. P. Lovecraft. The hints of cosmic horror make it seem like the mystery is bigger than what humans can understand. Rust’s pessimistic views on the “gutter” of outer space and the appearance of antler crowns, devil-nets, antiquated Mardi Gras folk ceremonies and ancient families all have a Lovecraftian feel – not to mention the great big swirling vortex into the universe that opens up briefly in the final episode just before the series’ true villain, Errol Childress (Glenn Fleshler), attacks Rust. This black hurricane seems ready to tear a hole in reality itself. Childress’ labyrinthine lair of entwined wood and twisted branches looks almost like yet another evidence wall, another archive. But this one is made of misshapen materials, pointing to evidence of something far older than human reason and meaning. Still, Childress is but one part of the cult. Whatever the detectives discover never seems to solve the whole mystery. The answers remain in shadow as do the identities of the other cult members. The clues don’t always add up to the complete picture. 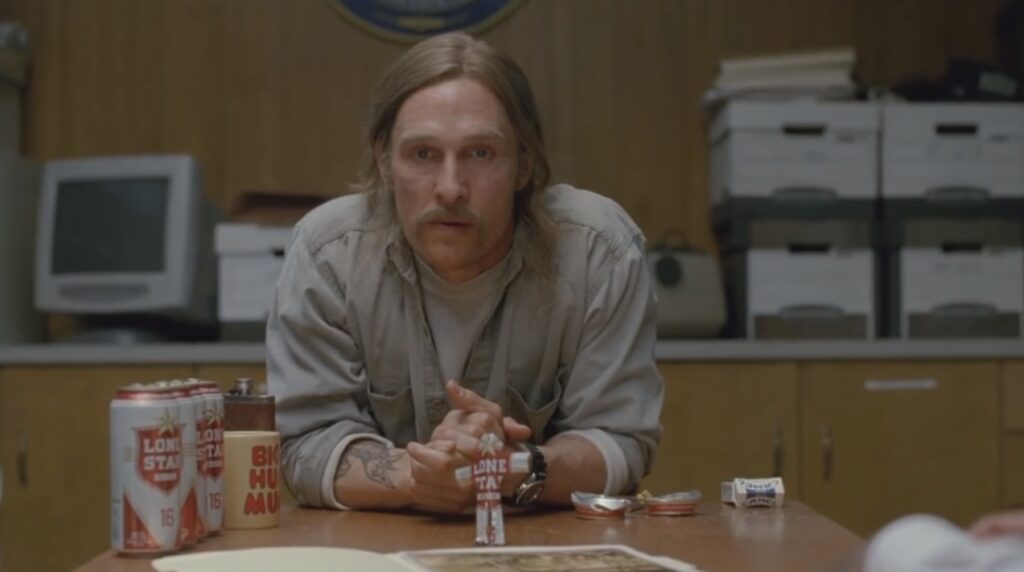 In crime fiction, regardless of whether a mystery is solved or not, the evidence wall is fated to become part of the archive. The autopsy reports, crime scene photos, criminal records and suspect identikits appear to create a trail that can be followed – a series of dots to be connected. The archive offers the promise of coherence. Archival horror, on the other hand, encourages us to doubt or be suspicious of official accounts of reality. The crime board and the archive are not a record of one reality but of many realities that can be sorted, sifted through, ignored or missed, depending on who is doing the organizing. Rust and Marty make progress in the end because they put the creation of the archive itself under investigation. They examine who has access to filing and who enters data into the system. Here, they uncover the corruption at the heart of the archive. The cover-up of crimes begins in the archive by those who decide what is an open or closed case. The unseen network of cult members and those who aid them offers a secret history of the State itself. However, like the highways and oil pipelines that crisscross the landscape, or the tangled lines of the Tuttle family tree, there are no straight paths in True Detective. They don’t get all those involved in the mayhem, and that is the true horror. The tentacles continue to slither.