Forgotten Females: Women in Jack the Ripper Films Part 2: “Man in the Attic”

MAN IN THE ATTIC opens with a silhouette of a figure in a top hat watching on as police patrol past in search of ‘the ripper’. Katy (Isabel Jewell), a woman who enjoys drink and merriment, is removed from a nearby pub by the landlord. They are met by two policemen who tell her she must be escorted home as it is their duty to protect her from the serial murderer. Comic and confident, Katy tells the three men: “I’ll drink until I float if I want to and no one is going to stop me,” before acquiescing to being taken home. However, just as the police assume she’s safe, she sneaks back out into the streets where she comes face to face with the killer. Backed up against a wall, her eyes fill with terror as she releases her last scream. Failing in their duty, the police are too late to save her.  Within seconds, their colleagues gather round to stare at the corpse, reducing the female body to nothing more than a spectacle.

While all this is taking place, married couple, Helen (Frances Bavier) and William Harvey (Rhys Williams) sit discussing the case in the warmth of their drawing room. Helen rightly asserts that if the victims belonged to a higher social class, something would be done. A knock comes at the door as Helen remarks how she can: ‘feel something’ and stood before her is the same silhouette of the opening scene. In search of a room, Slade (Jack Palance), a Pathologist is shown inside and insists on taking the attic as part of his lodgings. “I assure you” he tells Helen: “I won’t be doing anything dangerous.” 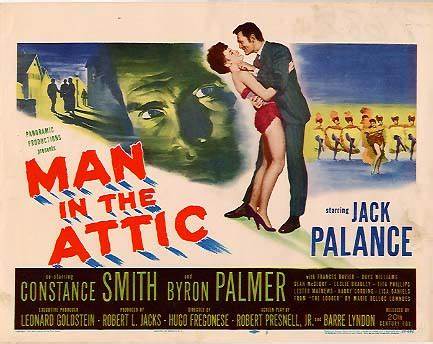 Settling into his quarters, Slade listens to Helen gush dotingly over her niece Lily Bonner, a cabaret performer. She shows Slade the advertisement in the newspaper which reads “the latest in saucy, delightfully wicked dances and songs,” leaving us to imagine Lily as a provocative and racy woman. When William offers their house maid Daisy (Tita Phillips) a ticket to the theatre, she demonstrates her shrewdness by noting that it is not wise for her to be walking the streets in light of recent events and her employer promptly gives her fayre for a taxi home.

Soon after, we meet Lily (Constance Smith), a self-assured, body confident and exuberant personality who: ‘comes alive at night’ and who experiences an instant connection to the mysterious Slade. At the theatre, we are also introduced to a retired cabaret performer, Annie Rowley, (Lilian Bond) who enters her old dressing room, now occupied by Lily. The two women converse as Annie recollects her first night of performing and how she was subsequently quickly forgotten. Now a fallen star, Annie works at a bawdy parlour entertaining men but just as Lily offers to extend a helping hand, she mysteriously disappears.

Lily and her cabaret troupe perform a flirtatious and entertaining dance as they are watched by a crowd of men. In this scene, the women are choosing to perform and have ownership over what they show and what they conceal.  In being looked at under their own terms, this contrasts with the earlier scene when Katy’s mutilated body is ogled by everyone without her permission.  As Lily is declared the toast of the town, post-performance she is approached by police inspector Warwick (Byron Palmer). Rather than be intimidated, Lily remains quick tongued and on guard when questioned and she learns that Annie Rawley has fallen victim to the ripper.

The following day, Inspector Warwick pays a visit to ask further questions of Lily and in a prophetic moment she declares: “I don’t think you’ll ever catch him.” Unfortunately, a fact that remains true of the ripper to this very day. Lily also displays a singular quality in her curiosity for finding out not only who the ripper is, but why he does what he does. When Warwick drops the clue that the ripper is believed to be left -handed, Helen cleverly hands Slade the newspaper, watching closely to see which hand he takes it with. She also declares Slade to be the ripper after seeing him burn an incriminating black bag. In an ironic moment she is ridiculed for being ‘at the sherry’ before her husband remarks that disposing of the bag was a sensible decision on Slades’ behalf. He reveals that he too has his own black bag and that every man with one is under suspicion before telling both Helen and Daisy that they are “overwrought” and “need a spot of sherry.”

Over tea, we learn about the story of another female character, that of Slade’s mother. Told entirely from a male perspective and with nothing but a miniature portrait to reference her, Slade explains his hatred of his mother, (who was also an actress) which is rooted in what he calls ‘the evil of her beauty’. Describing how she left his father for a young French boy, before becoming a ‘woman of the streets.’ His mother’s story is told from one side only.

One evening, Lily is woken up to the sound of strange noises. She shows no fear in venturing bravely in the dark with only a lantern for light, descending to the basement where Slade is burning his ulster (an item identified as belonging to the ripper). Meanwhile, Helen tells her husband firmly that they must report Slade to the police. 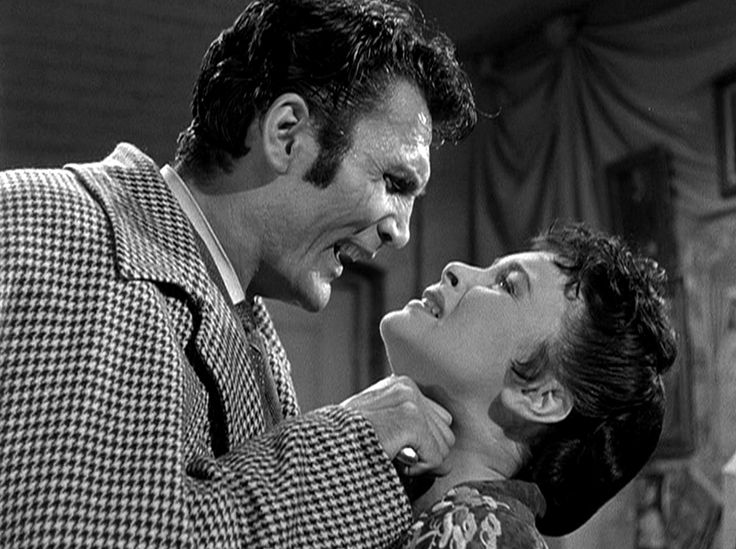 Invited to a Can Can performance by Lily, Slade reluctantly accepts while Daisy reveals more than she should in yet another visit from Inspector Warwick. In the privacy of her bedroom, Lily subverts the notion of being pursued by a man when she tells Helen that she ought not to be afraid for her niece, but for Slade, whom she plans to seduce. Preparing to leave, Lily catches Warwick snooping around in Slade’s room and horrified at this invasion, she declares: “you need not take me to the theatre tonight…Inspector!” before sashaying away resolutely.

As a result of their rummage through Slade’s quarters, new evidence comes to light when Warwick’s colleague recognises the portrait of Slade’s mother as Ann Lawrence-the first victim of the ripper. While this discovery is made, Slade is shown sitting tensely in the auditorium of the theatre surrounded by a sea of men who are giggling luringly at Lily’s performance. Once the show is over, Slade is found in Lily’s dressing room where he tries to persuade her to embrace the ‘sweetness’ of her beauty, as opposed to having men watch her using her: ‘body to corrupt’. This attempt to take the choice and agency away from Lily is unsuccessful as she does not bow down to his toxicity. Instead, she tells him: ‘I’m fond of you but I’m not ready to be taken over’, standing in her power, she is clear and certain in what she wants and is also able to ensure she survives without yielding to a serial killer. A high -speed handsome cab chase through the winding cobbled streets of London ensues with fatal consequences as the film concludes.

While at first glance it might appear that this is a male-centric film. It is brimming with representations of women who are united in their fight against male authority. First to be murdered by the ripper, Katy is deemed to be nothing more than a nuisance and is let down by the same police force who should be protecting her. With her observations on class Helen is more than just a housewife and Aunt to her niece Lily, who is magnificently glamourous, confident and unthreatened by the police. Even minor female characters such as house-maid Daisy are also shown to be astute. In addition to this is the missing voice of Slade’s mother whose narrative is told from a male perspective only, serving to highlight the unheard voices of women everywhere. The women of MAN IN THE ATTIC are united in their struggle and despite the weight of male authority they persist in their endeavours to support one another through friendship and camaraderie.