A figure in a lavish black cape and top hat is chased through the streets of London by a baying, torch-carrying crowd. Avoiding the mob, he flees to a nearby house and into a room occupied by a mother and her infant daughter. A young child, Anna (Angharad Rees), sits in a cot while the capped killer murders her mother before taking her in his arms. Traumatised, she watches her mother’s last breath expire before her eyes.

Years later, a now seventeen-year-old Anna finds herself being manipulated by the eccentric Mrs Golding (Dora Bryan) into hoodwinking grief-stricken parents by imitating voices from the spirit world.  Amongst those watching the séance is the refined and bookish Doctor Pritchard (Eric Porter). As the party breaks up, the discerning Pritchard uncovers a concealed Anna and exposes the façade. While Mrs Golding asserts that, in adopting Anna she is doing all she can: ‘for the poor creatures of this world’ Pritchard insists that she is being unduly abused, a somewhat ironic comment given the behaviour we will witness from him as the films proceeds. A complex character, the landlady might seem the caring matriarch but in renting out Anna as a prostitute to raise money, she subjects her to sexual trauma. She does however, briefly redeem herself by bursting into the room to check on Anna when one of the visiting clients becomes violent. As a struggle takes place, Anna experiences a flashback to her mother’s death which results in a violent attack. Nestled into the wall in total fear, this is promptly followed by the arrival of Pritchard who makes a bloody and unpleasant discovery.

On the streets of London, a police van unloads a group of female sex workers destined for jail. Thrust into a prison cell along with the group of playful and corset-adorned women, Anna sits in a corner unable to speak. In a troubling development, Prichard sweeps in under the pretension of ‘rescuing’ Anna from ‘night visitors’ and ‘seances’ while his true objective is to probe her to uncover the reason why she murders. Anna is overwhelmed at Pritchard’s lavish house and as she is shown her room (which, in belonging to his now deceased wife already has dark connotations) we see it contains both a prominent mirror and a roaring fire; two features of her original trauma. Although Anna now has a space of her own, this is not on her own terms or without threat as she will soon be subject to a Vertigo-style makeover. This includes the donning of a dress which belonged to the late Mrs Pritchard, which is picked out, not by Anna herself but by housemaid, Dolly (Marjie Lawrence) who assures the Doctor: ‘Don’t worry, you won’t recognise her.’ For Anna it would seem that being herself is not deemed acceptable. 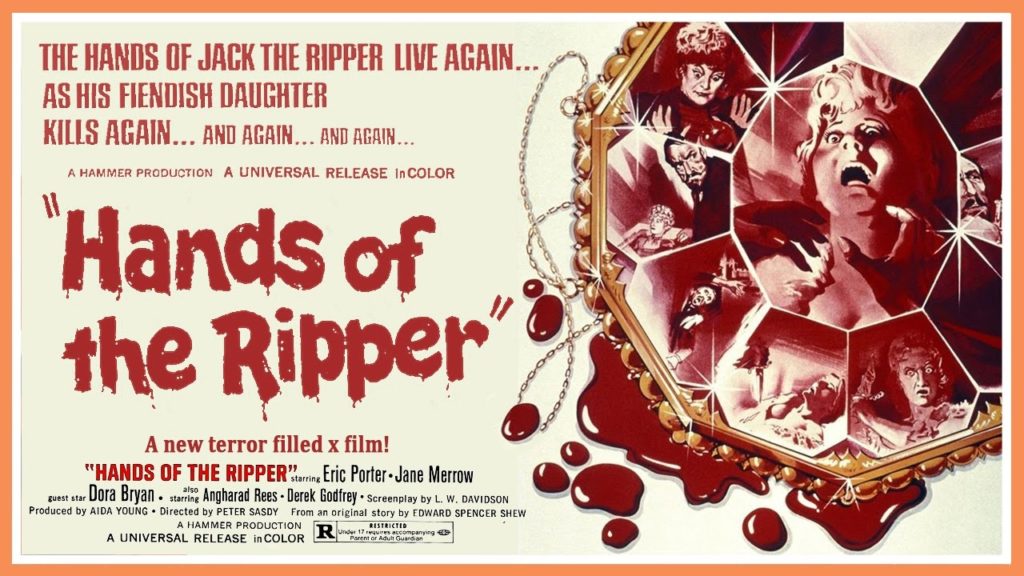 Meanwhile Laura (Jane Merrow), the well-dressed and plucky bride to be of Pritchard’s son Michael (Keith Bell) arrives at the station to meet with her fiancé.  Far from needing the help of others, Laura (who is blind) is presented as staunchly independent and is able to recognise both voices and the layouts of rooms that she has not heard or occupied for over a year. In due course, Anna is presented to Michael and Laura in a white undergarment covered in dirt and is viewed as nothing more than Pritchard’s latest distraction.

In the locked privacy of his study, Pritchard reveals to acquaintance and parliamentarian Dysart (Derek Godfrey) that he has lied about his whereabouts to the police because ‘it suited my purpose’. Advising that the only reason he has kept Dysart on board is so he can utilize him to find out ‘everything you can’ about Anna’s past, Pritchard reveals himself to be an oppressive and insincere force. Using Dysart’s’ unique position, Pritchard will disturbingly seek to unpack Anna’s personal history without her knowledge or consent.

Whilst preparing for an evening of dinner and dancing, a warm and natural bond begins to form between Anna and Dolly with the former insisting that the maid does not refer to her as ‘Miss’. Their preparations are interrupted with a deeply inappropriate visit by Pritchard who approaches Anna whilst she is in the bath, demonstrating that he has no respect for her privacy. He offers a jewelled necklace and warns Dolly not to let the new guest out of her sight. As Dolly puts the jewel around Anna’s neck, she slips into a haze before slaughtering the unsuspecting maid.

After being stood up by Anna at dinner, Pritchard returns home to find her hands soaked in blood as he uncovers the lifeless body of Dolly. Scooping Anna up into his arms, Pritchard lays her on his treatment table. Now under his complete control, he proceeds to drug her with sedatives, whispering that she has ‘dozed off and had a bad dream’ before cuffing her to the bed with straps. Unconscious and unable to move, Anna may not be in jail, but she is in a prison of a different kind as she has transitioned from being used for sex to being used for egocentric experimentation. In another clandestine meeting, Dysart reports back to Pritchard, advising that despite checking all records he has uncovered no information. However, in another example of men taking Anna’s choices and agency away from her, he explains that he has made an appointment with a clairvoyant who he believes will provide further insight into her condition.

With Dysart gone, Pritchard tries his hand at some amateur psychoanalysis, imploring Anna to recollect her childhood memories of her mother. In a moment of distraction, she manages to flee and walking amongst the streets now dressed in a plain, brown cloak, she eschews her lavish clothes to regain her identity. One of the women, Long Liz (Lynda Baron), takes Anna under her wing and promises to teach her ‘a few little tricks’ and another attack ensues. Realising his patient has escaped, Pritchard questions the women and as he shakes them, they warn him ‘don’t squeeze the fruit unless you are buying it’. Upon finding Anna, the Doctor takes her to the clairvoyant Madam Bullard (Margaret Rawlings) only to undermine her practises and beliefs with insults. In response, she assures him firmly that: ‘the only apparatus I use is myself’. Detecting an immediate violence in Anna, she is able to see what the men cannot and provides the most accurate description of her client’s suffering. 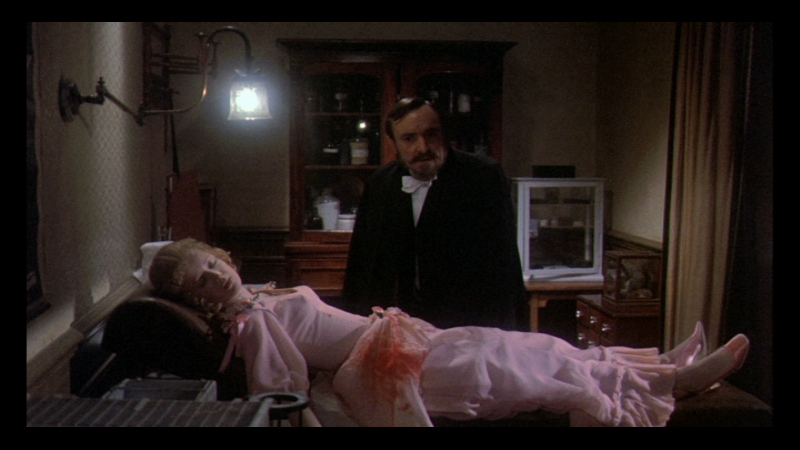 When they return home, Pritchard takes Anna to the patient’s bed once more, promising that he will ‘show’ Dysart what he has discovered as he dehumanizes the female body. It is clear that Anna is just a means for him to prove his theories and he has no regard for her wellness or the safety of others. The two men discuss their approaches, one of which is to ‘cure her’ and the other is death by: ‘putting a rope around her neck.’ As Dysart reveals he will expose Pritchard to the police, the Doctor approaches Anna declaring ‘I have failed, I’ve you and I’ve failed myself’ before in another ill-informed move, he kisses her without consent. Anna manages to leave the house in order to visit the whispering gallery at St Paul’s Cathedral with Laura. At the gallery, rather than Laura’s voice, Anna hears the words of her father as she cries in tears of sadness. Instinctively sensing that something is amiss Laura tries to reach out to Anna, telling her not to be frightened.  Pritchard catches up with them just in time to witness Anna’s final attack as he calls to her: ‘come to me’ and she smiles softly at him before throwing herself off the balcony.

THE HANDS OF THE RIPPER provides a grim view of the prospects for and treatment of women. The central character Anna deals with being orphaned at a young age through a traumatic experience and rather than being met with support and therapy she is passed around between people who systematically exploit her. The sex workers within the film are also representative of vulnerability but most crucially they come together as a community, highlighting their strength, compassion and unity. Anna finds herself experimented upon by Pritchard who refuses to acknowledge her authentic self or allow for her to undergo her own journey, instead he views her as little more than a project. He repeatedly seeks to impose his own projections and ideas about Anna’s identity upon her through both physical and psychological manipulation and abuse. It is notable that its only females who are able to get close to detecting what Anna has experienced (Madam Bullard) or who try to reach out to her with care and support (Laura). As the credits roll Pritchard and Anna lie together in a state of unresolve; he is no clearer about why she has committed the murders and she is not only dead, but the scars of her ordeal remain unhealed.