Opening today and running all summer long, the Museum of Modern Art‘s “Messaging the Monstrous” film series doesn’t make the tough decision between depth and breadth – it chooses both by the fistful.

For longtime horror fans, the series is a great way to rewatch some undeniable classics on the big screen. For newbies, the organization by subgenre and theme (the “messaging”) provides a handy way to get brought up to speed fast.

With a lineup of more than a hundred films, many of which you undoubtedly know and love, this curation reveals a savviness in terms of both horror fandom and discourse. For example, films that have been subject to reappraisal over time, such as The Texas Chainsaw Massacre 2 and Friday the 13th Part 2, have been selected over the other sequels in their respective franchises. In that same “Slasher”-oriented vein, they’re joined by films such as 1982’s Slumber Party Massacre, Bob Clark’s beloved Black Christmas, Mario Bava’s masterful A Bay of Blood (aka. Twitch of the Death Nerve), recent entries You’re Next and It Follows, and genre favorites Psycho and Scream. This is just one of many similar tracks that are thoughtfully programmed. 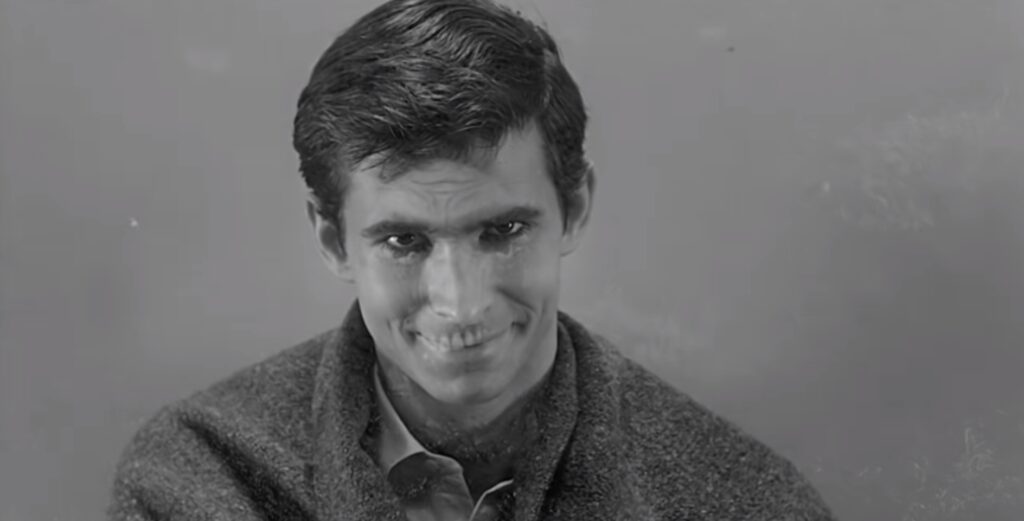 “A boy’s best friend is his mother.” Anthony Perkins as Norman Bates in Alfred Hitchcock’s PSYCHO.

All told, you’ll find everything from modern classics (Bong Joon-ho’s The Host, Jennifer Kent’s The Babadook, Tomas Alfredson’s Let the Right One In ) to cult flicks (John Hancock’s Let’s Scare Jessica to Death, Michele Soavi’s Cemetery Man) alongside representative work from canon directors George A. Romero, John Carpenter, and David Cronenberg. So do you really need me, or anyone, to recommend films like these? With your answer to that in mind, it’s probably better to spotlight a few titles that aren’t as widely known.

Alexis Arquette and Sarah Smuts-Kennedy in JACK BE NIMBLE.

Jack Be Nimble (1993, Garth Maxwell). As the title may imply, the film self-consciously styles itself as a kind of fable. That’s why you’ll forgive (and even come to appreciate) the exaggerated quality of nearly every scene; The film passes through near-absurdity and comes out the other side, ending up somewhere close to expressionism. Along the way, you’re sure to experience some moments and images that will stick. You’ll also see echoes of films like De Palma’s The Fury and Kurosawa’s Cure, but as the saying goes, Jack Be Nimble is really its own animal. Some might be disappointed in an ending that revels more in metaphysics than Grand Guignol, but if you think about it, it fits. (Note: The filmmaker will be in attendance.) 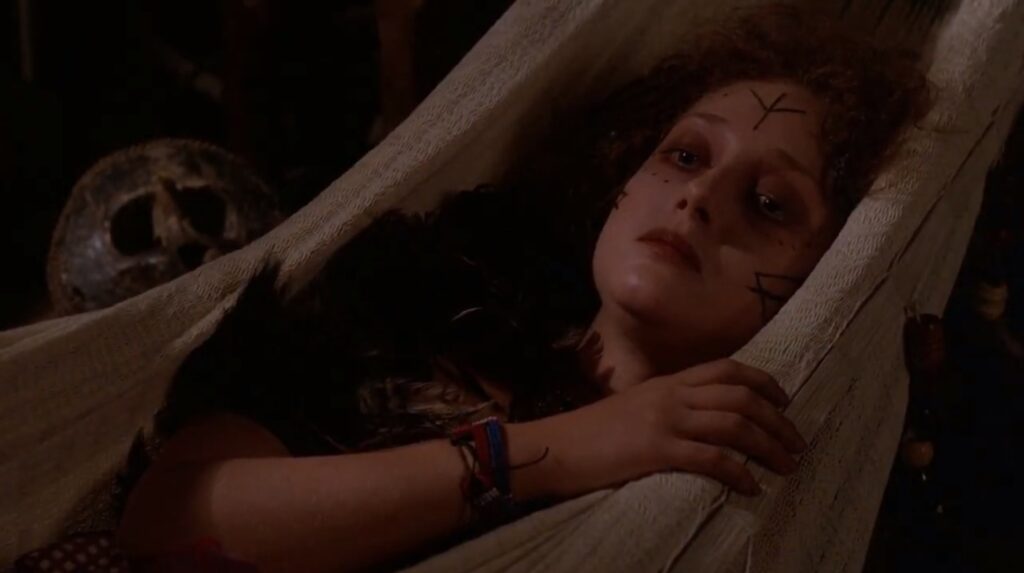 The Mafu Cage (1978, Karen Arthur). Purists may feel that this is more of a slow-burn psychodrama than full-blown horror, but I’d disagree. The cultural impact of making mental illness the basis for a “monster” is debatable, but there’s no question that it’s long been part of the “Othering” that is central to the genre. With its tiny cast and limited number of sets, the film has an atmosphere that’s insular without ever being static, Energy is not repressed but rather contained under pressure. There’s a dynamism to every scene and stars Lee Grant and Carol Kane (who additionally appears in Office Killer, which is also screening) complement each other perfectly.  (Note: The filmmaker will be in attendance at this screening as well.) 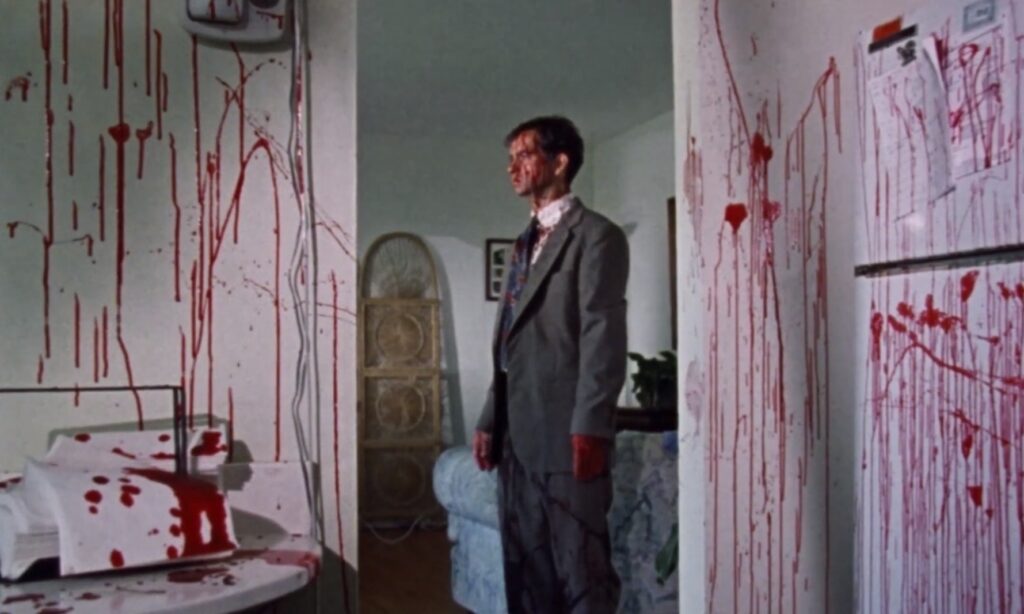 A bloody scene from FAMILY PORTRAITS: A TRILOGY OF AMERICA.

Family Portraits: A Trilogy of America (2003, Douglas Buck). This one is arguably somewhat better known, especially to those who have been following indie horror for a couple of decades. Comprising three thematically-related short films, Family Portraits is a unique work created by a singular talent. So direct and uncompromising and offering only microscopic slivers of hope, it’s the kind of art that initially may force you to respond with laughter. How else to process such raw ugliness and despair? While there are certainly some very bad people on display, the monstrous is more ambient and therefore, more subtly terrifying. It stems from the social norms we unknowingly adopt, the places and situations where our lives have taken root, the act of being human. 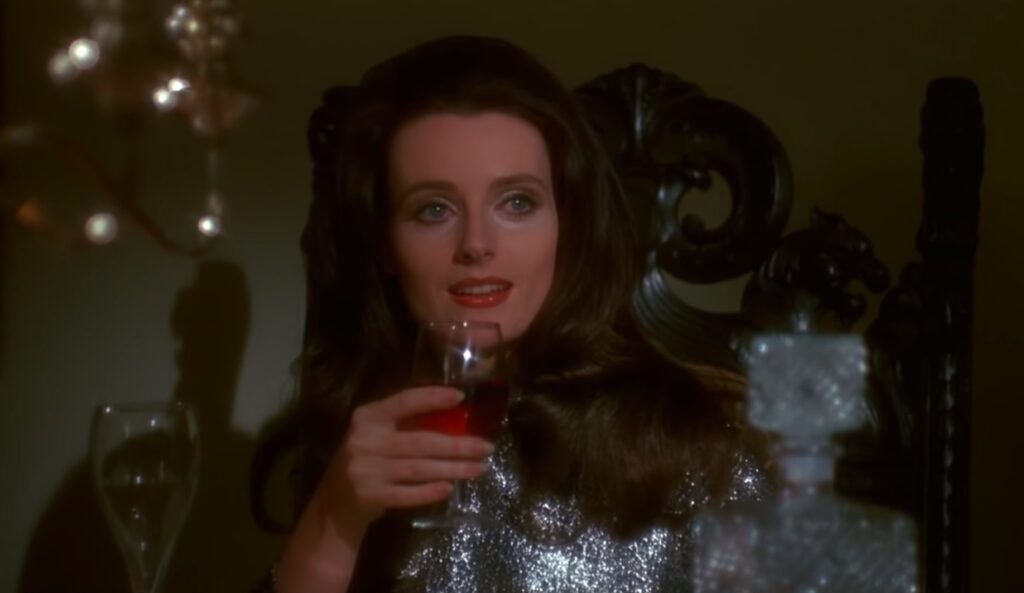 Celeste Yarnall is a different kind of bloodsucker in 1971’s THE VELVET VAMPIRE.

The Velvet Vampire (1971, Stephanie Rothman) makes a great case for both why “Desert Gothic” should be its own subgenre and why the early ’70s is an unsung golden age of American horror. With some obvious limitations, especially in the acting department, The Velvet Vampire is nonetheless consistently intriguing and often fascinating. Casually avant-garde and incidentally sleazy – hallmarks of many of the most entertaining films of the era – the film’s narrative evolves along fairly standard lines … before it decides to go completely wild in the last ten minutes. And that’s very satisfying. As with many of the films in this series, part of its fun derives not just from watching it but from discussing it afterward. (Note: As it turns out, the filmmaker will be in attendance for this one, too.)

Finally, the shorts that I’ve seen are consistently impressive, and they run the gamut from unapologetically experimental to crowd-pleasing horror-comedy and revisionist takes on genre tropes. These include Kate Dolan’s Cat Calls, Mariama Diallo’s Hair Wolf, Nikyatu Jusu’s Suicide by Sunlight, and Ben Rivers’s Alice.

Well, that’s it for now. Find me on Twitter (@suddenlyquiet), and let me know what you think.