Eyes in the Sky: A Closer Look At “The Mothman Legacy”

Any discussion with fence-sitters on the topic of cryptids almost always culminates with the invariable, “are they real?” Easy to understand, considering that the accounts of Sasquatch and Jersey Devils are often backed by anecdotal evidence at best, and most simply won’t believe in what they can’t see.

In 1967, the Silver Bridge – an architectural marvel of the time – collapsed underneath the weight of rush-hour traffic. 46 civilians commuting between Gallipolis, Ohio, and Point Pleasant, West Virginia, were plunged into the depths of the Ohio River, losing their lives in the frigid December waters. Such a disaster isn’t likely ever to be forgotten, but it’s what witnesses claimed to have seen around the site that has kept the story front and center in the public consciousness ever since: a large, winged creature unlike any fowl native to the area. Christened “Mothman,” its presence would instill fear and confusion in all who caught a glimpse. For them, the accident affirmed that the sleepy little haven of Point Pleasant was now playing host to something very devious, and very real.

The pyre of Mothman lore has been stoked intermittently in the years following the Silver Bridge mishap, a chronology which Ohio-born Seth Breedlove is all-too-familiar with. His interest in attempting to explain the unexplainable led to the formation of Small Town Monsters, an independent studio specializing in producing cryptid content. Featuring a catalog brimming with an array of documentaries on the likes of Bigfoot and The Bell Witch, his style of putting the lens on those with personal experiences imbues his productions with a sense of respect for the source material. Their newest work, THE MOTHMAN LEGACY, continues Breedlove’s delve into the mythos, which began with 2017’s The Mothman of Point Pleasant. While the original laid the groundwork and focused heavily on the events surrounding the initial sightings, this follow-up establishes its own identity by attempting to answer the question: What’s the Mothman been up to since 1967? 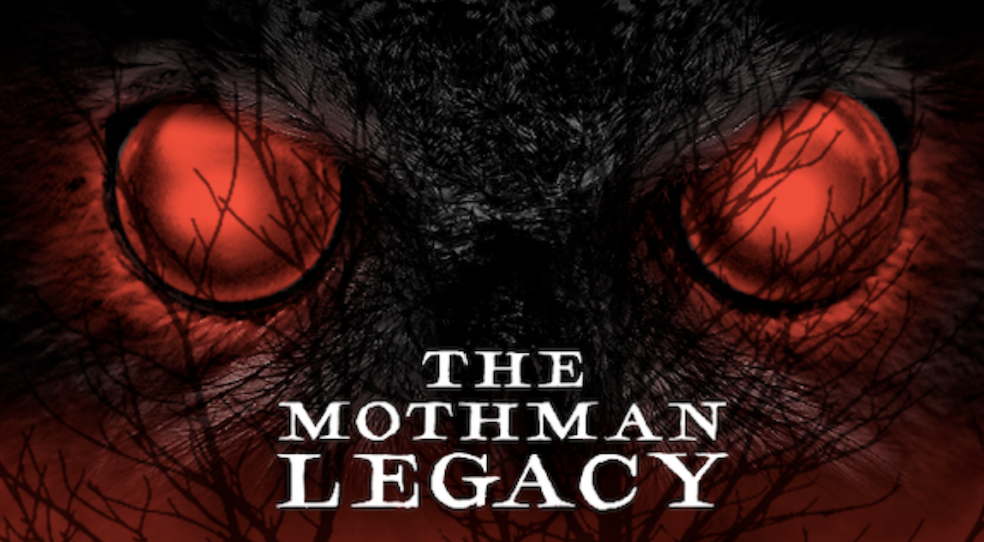 Narrated by frequent STM collaborator (and former Rue Morgue contributor) Lyle Blackburn, first-hand accounts by affected residents weave a narrative suggesting that Mothman’s been busy for the past nearly six decades. Finding subjects to discuss their interactions wasn’t a difficult feat, recalls Breedlove. “With our original movie, some of the major witnesses were hesitant to talk. For the sequel, there wasn’t any pushback. We had people approaching us wanting to be included.” Subjects recount their ordeals through the years, with accompanying decade-by-decade analysis.

The Mothman’s intent is a question that’s often explored but never understood. Did it bring doom to West Virginia, or was it trying to warn of it? The notion is touched upon throughout the film, providing arguments that support both perspectives. And while those who’ve seen it offer varying descriptions as to its physical state, most seem to corroborate a few features that would cause blood to run cold: Eerie red eyes that can pierce the night. A wingspan reaching upwards of 7 feet wide. A physical build nearing 10 feet tall. If the thought of such a beast gliding over treetops isn’t enough to cause distress…well, it turns out the damn thing walks, too. Says Breedlove, “Descriptively speaking, different people say many different things. However, they all tend to describe the bird’s gait as though its legs were bent backward, and it was walking like it was the first time.”

The Cult of the Red-Eyed Ultra-Terrestrial

Why it chooses to call the Midwest home is anyone’s guess, but THE MOTHMAN LEGACY does entertain a few of the more out-there ideas, including the notion that it’s a universe hopping entity, or a curse resultant of the slaughter of Native American leader Chief Cornstalk, amongst others. Sure, attempts are made to explain it away as a crane or owl, but there are those who believe something much more sinister is at work.  “I don’t talk to a lot of people who think Mothman is something undiscovered. Most people either believe it’s either a folk figure that’s taken on a life of its own, or it’s paranormal,” says Breedlove. “I do believe there’s an element that’s unexplainable. Some of the people I’ve talked to, their accounts defy explanation.”

Central to the legend is a tract of land known as the “TNT” area. Originally the site for an ammunition manufacturing facility during World War II that went dormant in later years, the location adds layers to the story. Some disseminate the belief that contaminated soil spawned a mutated bird and a few locals speak of finding abnormally large feathers in long-abandoned storage bunkers within the area. A particularly interesting concept is that of acolytes conducting nighttime séances in hopes of summoning their idol. The film also reveals that the creature isn’t exclusive to West Virginia, as reports suggest that he’s also made ventures into different parts of the country. “No matter where in the world people claim to see it, the Mothman is always tied back to Point Pleasant, ” Breedlove asserts. A dubious distinction, yet one that isn’t completely without benefit to the cryptid’s adoptive residence.

Point Pleasant’s population hasn’t changed all that much since the late ’60s and consists largely of families who’ve passed the tale down through the decades. According to Breedlove, “46 people were killed in a community of less than 5,000, so everyone there is somehow connected to someone from the bridge catastrophe.” Nevertheless, the region’s most infamous inhabitant attracts attention from curiosity seekers the world over, and all roads lead back to West Virginia.

Jeff Wamsley, proprietor and curator of the Mothman Museum, examines how the local economy tanked following the Silver Bridge incident, but eventually enjoyed a resurgence thanks to widespread exposure from John Keel’s 1975 bestseller, The Mothman Prophecies. Having opened in the early 2000s, Wamsley’s museum operates 7 days a week and is a popular stopover for everyone who makes the pilgrimage. There’s also a yearly festival that floods the streets with those who wish to entrench themselves in all things Mothman.

Rooted in tragedy, the saga of the Mothman has ingrained itself into the fabric of American folklore, and specifically that of Point Pleasant. While some shirk the idea that their little town is best known for its harbinger of doom, there are plenty that embrace the concept and the economic boon with open arms. “There’s a large number of people that are more annoyed than anything that this is what they’re known for, and then there’s the other half that can appreciate it,” says Breedlove. “There are constantly people down on Point Pleasant’s Main Street and Mothman is, by far, the biggest draw.”

THE MOTHMAN LEGACY is available for purchase at smalltownmonsters.com and on major streaming services.