HIDE AND SEEK, debuting tomorrow in theaters and on VOD/digital platforms from Saban Films, is a tale of two cities–within one city. Part of it is set in the literally upscale world of Noah Blackwell (Jonathan Rhys Meyers), who lives with his wife and kids in an apartment atop a fancy hotel his family owns. Not all of the Blackwells share in the riches, however; Noah’s brother Jacob has long been estranged from the rest (that’ll happen when they serve a restraining order against him), and circumstances force Noah to try to track down his errant sibling. The search leads to a rundown Queens tenement where (as seen in an opening sequence) murder is afoot, and Noah finds that the mystery of his brother is just one of the dark secrets dwelling there.

When RUE MORGUE visits the Brooklyn soundstage where HIDE AND SEEK is shooting, it looks like they’ve recreated part of the tenement, but in fact it’s the Blackwells’ place, which has been pretty well trashed. One of the leads (this is part of the film’s climax, so we won’t reveal who) makes their way down a darkened hall with a flashlight and comes to a hole in a wall; peering inside, they discover evidence of frightening things going on. As the camera rolls on the first take, the actor begins proceeding into the hall…and the flashlight goes out. This isn’t a standard horror trope being employed, however, but a prop malfunction. The actor gets the light working again, proceeds back to the start point, and another take rolls.

HIDE AND SEEK is the first in a planned series of Asian-horror remakes from CJ Entertainment, one of South Korea’s top film production and distribution companies. The original HIDE AND SEEK, written and directed by Huh Jung, was a major box-office hit in 2013, and when CJ entered into talks with Joel David Moore (the HATCHET and AVATAR actor turned filmmaker) about taking on one of their reboots, Jung’s movie was among a stack of DVDs they sent him for consideration. “I actually called [CJ exec] Francis Chung, and said, ‘There’s an incredible American remake of HIDE AND SEEK that could be set in a big city like New York,’ ” recalls Moore, who had recently shot parts of the dramedy YOUTH IN OREGON in the Big Apple. “And he said that HIDE AND SEEK was the one that he was hoping I would connect with, because it did so well back in 2013-2014 in Korea and the surrounding territories that he felt there was real crossover potential for a remake. 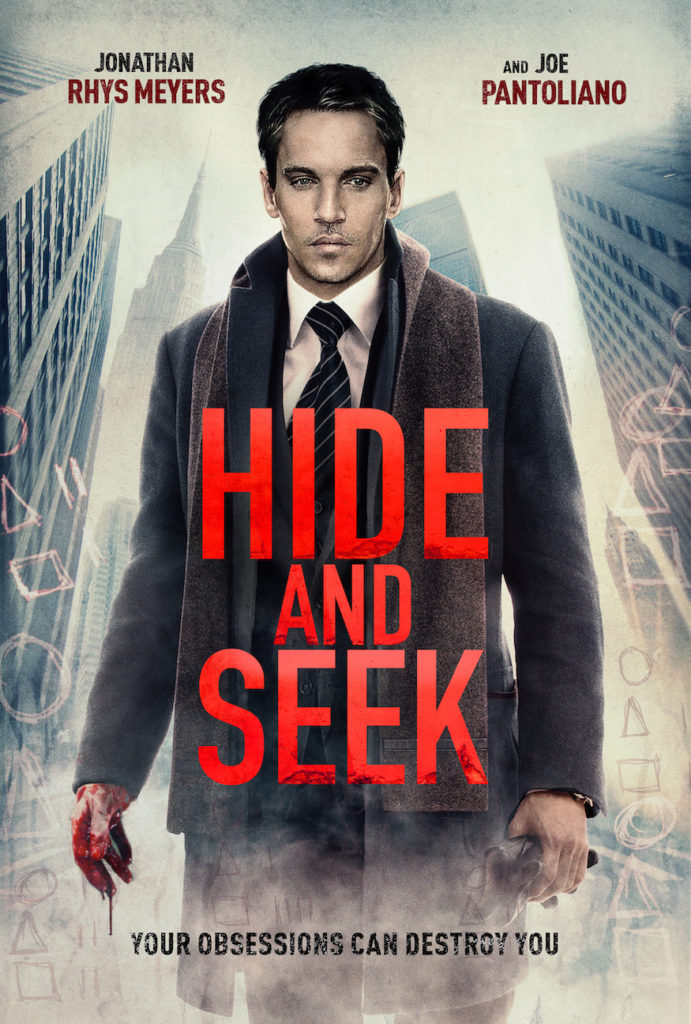 “A little-known fact,” Moore continues, “is that HIDE AND SEEK was already remade, almost shot for shot, in China [by director Liu Jie in 2016]. I’m doing the ‘reimagining’ version, where it’s not shot for shot; it takes the same subject matter–rich brother, poor brother, it deals with familial issues and wealth disparity–but there are a lot of differences along the way. I want to tell an Americanized story.”

“Joel really responded to the direction we wanted to take the remake in, in terms of all the themes and social messaging we wanted to explore,” says Fred Lee, director of development at CJ Entertainment and one of HIDE AND SEEK’s producers. “He had directed a genre piece before [2007’s SPIRAL], and we knew he was great with character and performance, so it was a great fit.”

The social themes he references are issues of class and economic disparity that become pronounced as Noah becomes more involved in the lives of the residents of that tenement, including struggling mom Soo-mi (Sue Jean Kim) and her little daughter Mi-jin (Avril Wei). In fact, 7-year-old Wei, making her film debut in HIDE AND SEEK, sees it less as a horror movie than “a sad movie, because my mom tries everything she can to give me a good home. And Noah’s father, when Noah was young, did not treat his brother as well as he treated Noah. It just makes me cry; I cried when I read the script.”

“Those themes were sort of baked into the original film,” Lee notes, “but they weren’t really played out to great thematic effect. So when we were formulating the remake, we saw this as an opportunity to inject our film with something a bit more political, a bit more substantive when it comes to those economic and class issues. That’s why New York lends itself so well to this story, and why we wanted to shoot here, because New York is a quintessential city, and nowhere is this idea of gentrification and economic inequality more apparent than in New York.

“What’s really anchoring our story, though,” he continues, “is Noah’s desire to find his missing brother, and that taps into a lot of familial strife, a lot of internal guilt. So even though it’s a genre film, it’s one with emotional heft to it. I feel that’s very representative of a lot of Korean films. They’re so great with the genre elements, at scaring you and making you feel tense, while at the same time infusing that with very real emotional depth.” 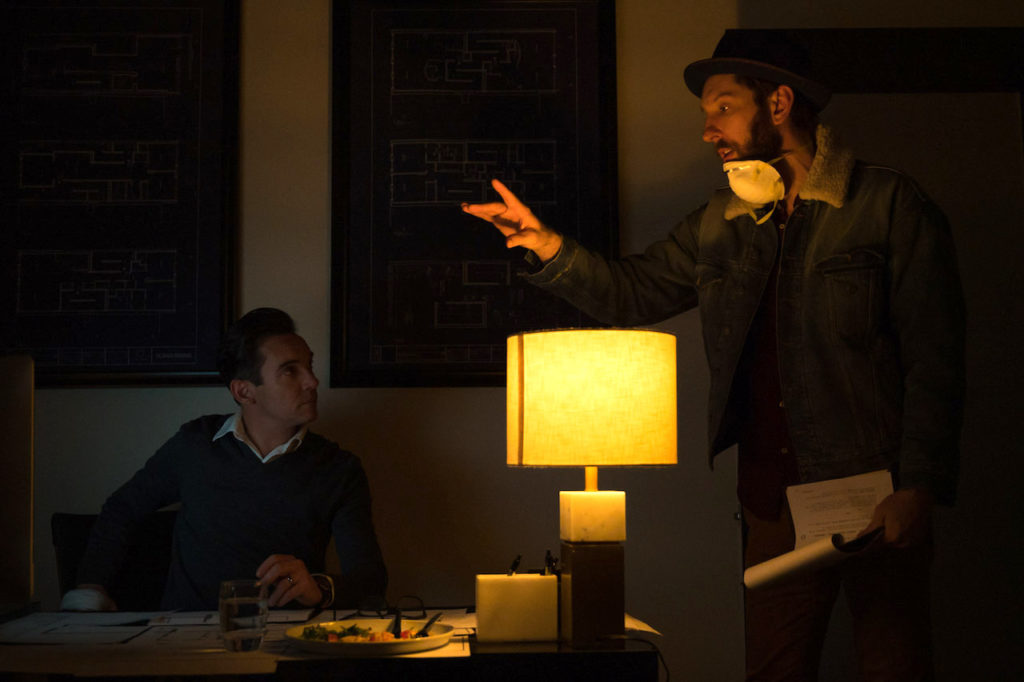 Although it is concerned with human threats and psychological damage, Jung’s HIDE AND SEEK has a kind of supernatural feel to the presentation, and the lighting on the remake set by cinematographer Ryan Samul (whose credits include Jim Mickle’s STAKE LAND, WE ARE WHAT WE ARE and COLD IN JULY) has a similar cast. Although the new version also has no explicit occult content, Moore (pictured above) reveals, “In early iterations of the script, my narrative leaned more into that. There was nothing fully supernatural, but it was what I would call the Lynchian version, where you ride the line between real and surreal. We ended up pulling back on a lot of that, and part of the reason was because CJ really wanted this to pay homage to the original. And while that film does have a bit of a supernatural feel, it goes into that genre well that every K-horror or Korean thriller does; all of them do have a kind of supernatural tone to them. So while my first interpretation was very strange, and I liked it, we did find a happy medium to tell the story.”

Which is not to say there aren’t plenty of scary moments and damage inflicted upon the characters, and that’s where makeup department head Christine Hooghuis comes in. Taking a break from preparing a nasty moment to be filmed this afternoon, the artist whose credits include TV’s THE PUNISHER, RISE and HOMELAND says, “This is my first horror film, which is so crazy because horror is my favorite! There have been a lot of cool injuries to create, and without giving anything away, you get to see a lot of progression of wounds [on one character] as the day goes on. There’s a lot of bruising, fresh blood and aged blood.”

These kinds of smaller-scale injuries can be more challenging than more extreme gore, Hooghuis says: “I try to work very realistically; you don’t want to go over the top, you want to really nail it so it doesn’t distract from the characters and the story. You have to have really good references, and I like to use UFC images, looking at the fresh blood and what happens when someone gets hit, and see the direction of where it goes and how it dries and things like that.” There’s been one other challenge on HIDE AND SEEK: “We were shooting in really fancy places sometimes, so trying not to get blood on everything was a little difficult!”

The cast of HIDE AND SEEK also includes Jacinda Barrett as Noah’s wife Samantha, Quinn McColgan (EXTINCTION) and Eli Golden as their kids and Joe Pantoliano (who talks about HIDE AND SEEK here) as a family advisor. When it’s pointed out that Irish Rhys Meyers and Australian Barrett are playing native New Yorkers in the film, Lee responds, “What’s interesting is, we found that a lot of the talent who responded to the script the most were people from other countries. The source material is Korean, and I think there’s something to be said for a Korean sensibility really appealing to actors who are internationally based. There’s a little bit more nuance there, there’s a challenging element for an actor, so a lot of people who responded to this were from the UK and Australia.”