Exclusive: Sandy King talks her and John Carpenter’s “TALES FOR A HALLOWEEN NIGHT” coming to TV and more

Producer Sandy King and her husband John Carpenter have successfully branched out from features to comics with TALES FOR A HALLOWEEN NIGHT and other titles from their Storm King line. Now TALES is poised to make the jump to television, and RUE MORGUE got exclusive words with her about that project.

King, whom we spoke to at the recent New York Comic-Con, published Volume 3 of the TALES anthology (with stories written by herself, Carpenter, David J. Schow and others) earlier this month, just as they were closing the deal for the TALES TV series. “We signed the deal with UCP [Universal Cable Productions] and Syfy to do TALES FOR A HALLOWEEN NIGHT, and we’re getting ready to put that together,” she tells us. She reveals that while plans are to carry on the anthology format of the comics, they don’t intend to do direct adaptations. “The idea behind the books is that you can have an evening of reading short scary stories, none of which are alike, and they’re all the different faces of horror. There are ghost stories, there are sea-monster stories, there are cursed rings; there’s intellectual horror and bugs, and all sorts of things.

“So the idea behind the series,” she continues, “is to not just barf back the books and do the same things and say, ‘Here’s the books in TV form.’ We want to give you that same feeling of seeing all the facets of horror.” 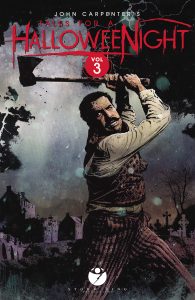 Carpenter, she confirms, would get behind the camera for the TV TALES, though not all the episodes. “He would direct the pilot, at least,” King says. “And then we’ll hopefully bring on some great horror directors—and just great directors—so that it’ll be a high-end show. We want anything that has our brand associated with it to be a satisfying experience for readers, watchers, whatever we’re doing.”

Although TALES would seem to be a natural for transition to the screen series format, King admits, “It was just supposed to be a comic book, and I was surprised when, out of all the things we were doing, when Universal had approached us to do a television deal with them, that was what they chose. I really wasn’t thinking about TALES as a TV show. Each of the comics we’ve done has just been meant to be the best comic we could come up with, because I don’t think in terms of making one thing as a bounce board for something else. Not all comics make great movies or series, not all movies or series make great comics, and if you’re going to go from one to the other, you need to inhabit that universe but make it something special and different.”

Of course, as she notes, Carpenter and Halloween do have a long screen history together. “Well, yeah—as soon as you go spooky, it’s us, and if you say, ‘Halloween,’ they say, ‘John!’ [Laughs] Which is nice; it could definitely be worse. But we also have ASYLUM, we have science fiction, we have all these other things, but that one really rang their bell, apparently. So now, the big challenge is to make it something that’s special in the marketplace. It’s one thing to make the sale and have a deal, but now we’re holding out for, ‘OK, but what’s going to make this something that delivers for fans?’ Because one thing that I think sometimes fails in the implementation is remembering the audience. We’re also that audience, and sometimes executives aren’t. Now, I believe TV is a friendlier space, right now, for real creative, out-of-the-box thinking. Feature films are less daring these days, so TV is currently a very interesting place to be.”

As for the new HALLOWEEN feature that Carpenter is currently executive-producing for David Gordon Green to direct, all King will say is, “I seem to wind up in the meetings, but not officially. It’s going well!”

She can be more forthcoming about what’s up next for Storm King Comics, starting with the new TALES OF SCIENCE FICTION series VORTEX, which lands this week. “It’s an outer-space horror story that was created by John and myself, and I turned it over to an English writer, Mike Sizemore, to script the monthly comic. There’ll be eight issues, with art by Dave Kennedy, and I think everyone’s going to enjoy that. We have three years of various issues planned so far, with writers like Louise Simonson, Joe Harris, David Schow, Duane Swierczynski, so there’s a lot of good stuff coming in. TALES FOR A HALLOWEEN NIGHT Volume 4 is already in the works; we’re not real far down the line with it yet, but Steve Niles will be in it, with art by Kelley Jones—how’s that for a book?”

What we won’t likely see, she adds, are adaptations of her and Carpenter’s previous feature films. “Just like with TALES, once we’ve told a story, we like to move on and tell different ones. It’s not quite as interesting to keep doing the same thing. Plus, once you’ve done a movie, you have all these rights issues, because so many people are involved with the financing and production, and you’ve got to sort out all those rights questions with everybody. It’s easier to just create something new and tell fresh stories.”