There’s something even more frightening lurking behind a scary on-line trend in #SCREAMERS, coming this spring as a Dread Central Presents title. We’ve got the exclusive first look at the poster and words from the creators, along with the first round of playdates.

Dread Central Presents, the horror arm of Epic Pictures, will be showing #SCREAMERS theatrically as part of its special monthly screening series April 5 and 6, with VOD release scheduled for April 17. Dean Ronalds (NETHERBEAST INCORPORATED) directed from a screenplay he wrote with Tom Malloy (THE ALPHABET KILLER, THE ATTIC), who also stars along with Chris Bannow, Griffin Matthews, Abbi Snee and Emanuela Galliussi. The synopsis: “Internet gurus Tom Brennan [Malloy] and Chris Grabow [Bannow] know what sells on the Internet. They’ve built their viral-video site gigaler.com into a moneymaking machine, primarily by providing their audience with “screamers”—videos that distract the viewers, then scare them to death. Members of Tom and Chris’ team are sent an amazing “screamer,” which features a young girl at a gravesite and ends with a truly disturbing-looking boogeyman, and it becomes the top video on the site. After several conversations with someone who claims to be the girl in the video, it’s discovered that that girl looks exactly like Tara Rogers—who has been missing for years. Tom and Chris decide to take their team on a road trip to confront this girl and find out the truth…which leads to havoc and hell for everyone involved…” 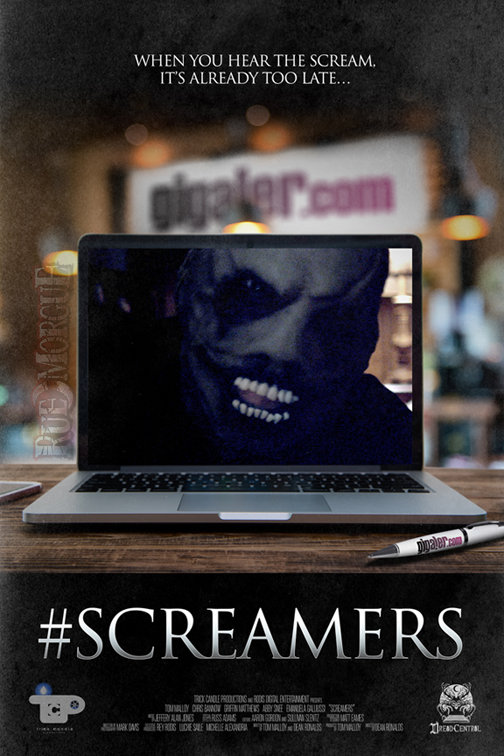 “I grew up loving Hitchcock films,” Ronalds tells RUE MORGUE, “movies that were puzzles the audience had to piece together, with characters we were invested in and a slow-building anticipation that it was all going to end badly. With #SCREAMERS, I wanted to return to this type of storytelling told with a modern-day style, one that mixes documentary with found footage and narrative storytelling.”

“I wanted to take the found-footage genre to a whole new level,” Malloy adds, “and to me, that meant making the performances and the plot so believable, there’s a question as to if the movie is actually real. There isn’t one moment in #SCREAMERS that’s not believable and logical, which makes it even scarier.”

DCP is still getting the full run of theaters showing #SCREAMERS in order, but the following are confirmed, with more to be added as the release date draws closer. You can keep tabs on them via the Dread Central Presents Facebook page.