A war veteran is haunted by a death literally in his own backyard in DIANE, from writer/director Michael Mongillo and Mean Time Productions. After playing festivals, it’s now headed for release later this year, and we’ve got exclusive details and quotes, along with the poster and trailer.

Mongillo, whose previous films include the youth-horror film THE WIND and the mock-doc satire BEING MICHAEL MADSEN, scripted DIANE from a story by Matt Giannini. Jason Alan Smith, Carlee Avers, Margaret Rose Champagne and Dick Boland star; the synopsis: “Steve’s [Smith] lingering injuries and regrets from the war in Afghanistan plunge him into a soulless routine until the dead body of a beautiful singer, Diane [Avers], is dumped in his backyard. Steve takes a digital photo of her before reporting the murder to the police, and soon he becomes obsessed with the dead woman’s image. Now the prime suspect, Steve is scrutinized by the police, hassled by Diane’s widower and attacked by self-righteous neighbors. Before long, the malevolent ghost of Diane begins to work a dark spell that leads Steve to strange and startling revelations.” 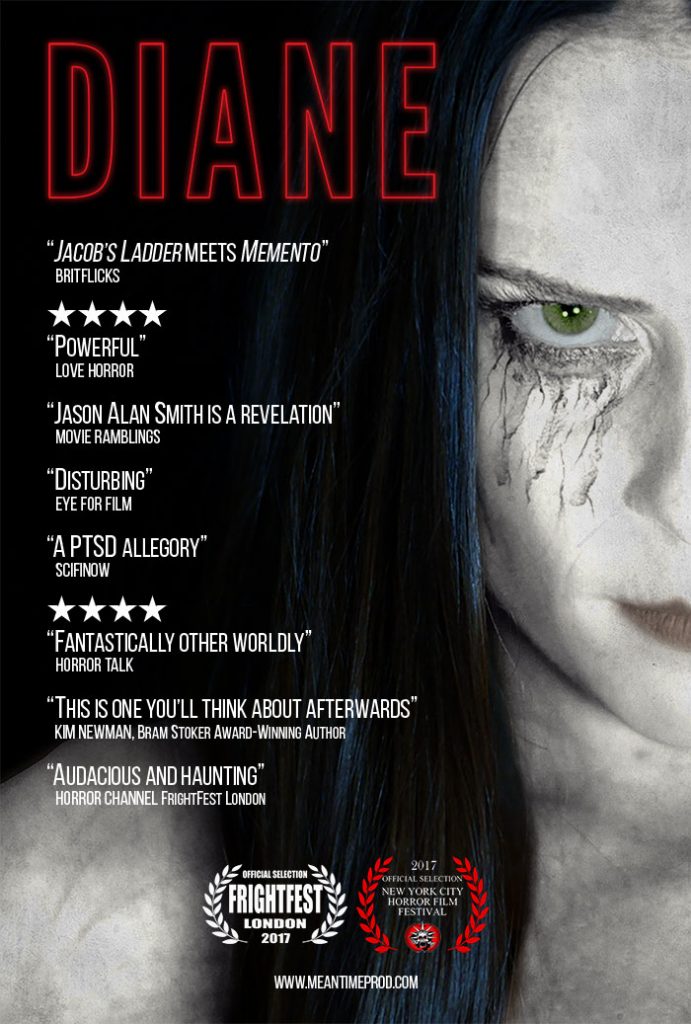 Random Media picked up the rights to DIANE, which is scheduled for release in September via The Orchard and Sony Pictures Home Entertainment. “We are thrilled to be releasing the movie,” Random CEO Eric Doctorow tells RUE MORGUE, “because it has nuance and layers. It is not a standard genre film; it has depth. For a company like ours, finding movies that make a statement in a cool way is very important; it’s the only way to break through and find an audience in today’s marketplace. Michael has come up with a great tagline, ‘Past Ghosts Meet New Ghost,’ and we believe it sums up the movie perfectly.”

We also heard from Mongillo: “My ambition for DIANE was to push myself to be a director who writes, not a writer who directs,” he says. “It was a conscious decision that definitely helped me grow as a filmmaker. It made me uncompromising about capturing the imagery and mood I was after without treating the script like something precious. As a director, I was never harder on myself as a writer. Director-me even made writer-me rewrite the entire script when our start date was delayed from spring to autumn. I was never entirely happy with what was then the fourth draft, so I just destroyed it and rebuilt it; probably less than a third of what was in that earlier version remained in the end.

“During shooting,” he continues, “I dropped several scenes, added a few new ones and worked with the two lead actors in a way that empowered everyone to make it about the moving image, about the moment, not the written word. And the ‘kill your darlings’ approach was carried over to the edit, too. The assembly cut was over two hours; the final cut is 82 minutes. It’s a bit of a film-school cliché that you tell your story three times: once when you write it, again when you shoot it and, for the last time, when you edit it. DIANE is the first feature I’ve directed where each of these stages truly became its own process and experience, almost like I was a different person at each stage. I think it’s my best work because of this.”

Keep your eyes here for more details of DIANE’s release!