Exclusive: Lon Chaney classic “LONDON AFTER MIDNIGHT” and “THE CURSE OF THE WOLF MAN” coming as graphic novels

A legendary lost horror film and the sequel to a Universal classic are on the way in illustrated form.

RUE MORGUE got the first word from Source Point Press about its new partnership with Ron Chaney of Chaney Entertainment to produce a pair of graphic novels: LONDON AFTER MIDNIGHT, based on the 1927 silent vampire thriller starring Lon Chaney (pictured above) that has become an iconic lost film, and THE CURSE OF THE WOLF MAN, a sequel to the landmark 1941 THE WOLF MAN starring Lon Chaney Jr. LONDON is being adapted by Source Point Press special projects manager Dirk Manning (TALES OF MR. RHEE) and fully illustrated by Ringo Award-nominated artist Marianna Pescosta (TWIZTID HAUNTED HIGH-ONS), while WOLF MAN is being written by Source Point editor-in-chief Josh Werner (THE WINCHESTER MYSTERY HOUSE) with illustrations by Stan Yak (BROKEN GARGOYLES) and colorist Colin Johnson (NIGHTWALKERS).

“Chaney monsters never die—they’ve just been waiting to be resurrected!” says Ron Chaney. “I love that we’re bringing the Chaney characters back to life, although in reality they never left, and I’m thrilled to be working with some amazing artists and creative teams on these graphic novels and am looking forward to a long relationship with Source Point Press to create a new brand of horror.”

Manning says, “The few existing photos of Lon Chaney as the creepy vampire in the top hat from LONDON AFTER MIDNIGHT are among the most iconic images in all of classic horror, and to be able to partner with Ron Chaney and Chaney Entertainment to finally give horror fans everywhere a chance to enjoy a definitive presentation of this story in graphic novel form is a dream come true for fans of classic horror!”

Adds Werner, “Lon Chaney Jr. was a true icon of classic horror, and among his vast array of roles that helped establish the greatness of the genre in cinema, there is none more iconic than the Wolf Man. The time has come for the fans to again return to the Chaney legacy with the CURSE OF THE WOLF MAN graphic novel, and I am beyond thrilled to be working with Ron Chaney on this project. Source Point Press and Chaney Entertainment are dedicated to the horror genre and bringing only the best to both our loyal fanbases as well as new audiences who will be discovering either or both of our works for the first time!”

Both titles will first be made available via Kickstarter in spring 2023, with release scheduled for later that year. “Kickstarter allows us to offer readers special upgrades, incentives, and add-ons that aren’t offered through the direct market,” Werner notes. “After Deluxe Editions of the graphic novels–with some cool extra incentives and add-ons–are made available through Kickstarter, we’ll then continue our partnership with comic shops and bookstores to offer trade paperback editions of the books to readers everywhere in perpetuity, giving horror fans different levels of access and entry points to the works.” 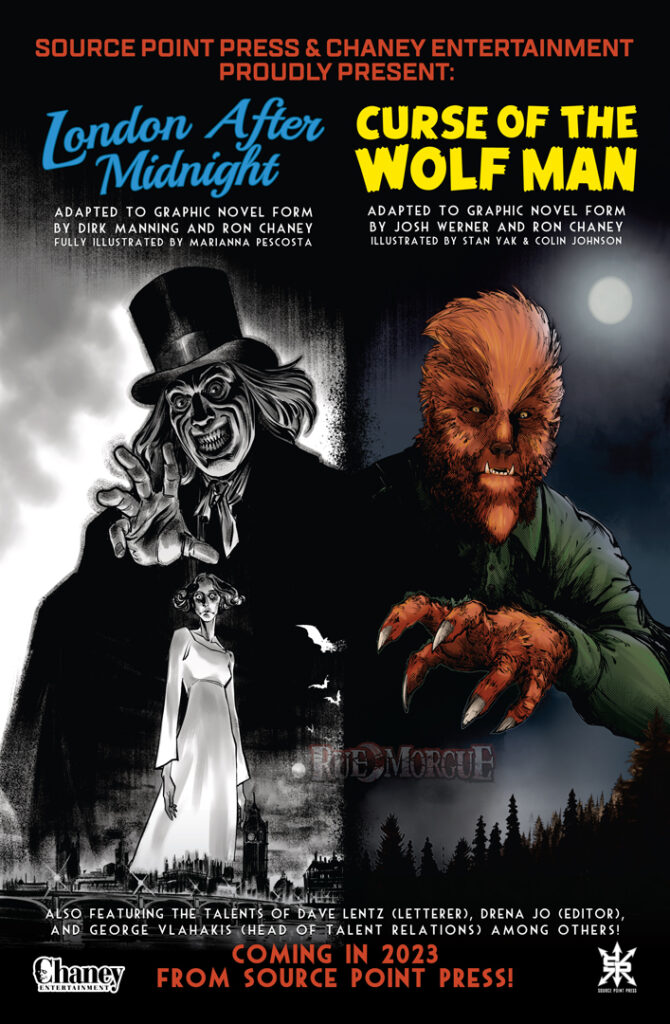