THE INVITATION is a modern-day horror story, but it harks back (or should that be Harkers back?) to an early classic of the genre. RUE MORGUE spoke to director Jessica M. Thompson about making a genre feature that marries the old and the new.

Opening Friday from Screen Gems, THE INVITATION (scripted by Blair Butler) stars GAME OF THRONES’ Nathalie Emmanuel as Evie, who is grieving the recent death of her mother and lamenting the dead-end jobs she’s stuck in. After she decides to take a DNA heredity test, she discovers both family and opportunity thanks to long-lost cousin Oliver (Hugh Skinner). He invites her to join her newfound relatives at a very upscale wedding in the British countryside, where she falls for the dashing Walter De Ville (GOSSIP GIRL and DESCENDANTS heartthrob Thomas Doherty). Unfortunately for Evie, this brood has a secret (one that has been revealed in the trailer and other publicity): they’re vampires, and the film is strewn with shoutouts to Bram Stoker’s DRACULA (starting with the name of Doherty’s character). The Australian Thompson, whose first feature THE LIGHT OF THE MOON won the Audience Award at 2017’s SXSW Film Festival, is “a longtime horror fan” making her first step into the genre with THE INVITATION.

What made THE INVITATION the right project for you to make your horror debut?

To me, the most interesting horror films are the ones that add social commentary, and have something to say beneath the horror. Of course, it’s always entertainment and scares first, but I loved, for instance, GET OUT and what it had to say, and also THE BABADOOK, which really explores the fear of motherhood, and Ari Aster’s HEREDITARY, which is an exploration of grief. So I was looking for a horror film with lots of layers, and when Blair’s script came to me in January 2020, and I saw that it was basically a story about a woman overcoming the odds to rise up and smash the patriarchy, I was like, “I’m in! I’m sold!”

How much did you contribute to the screenplay and bring to the project once you came aboard? 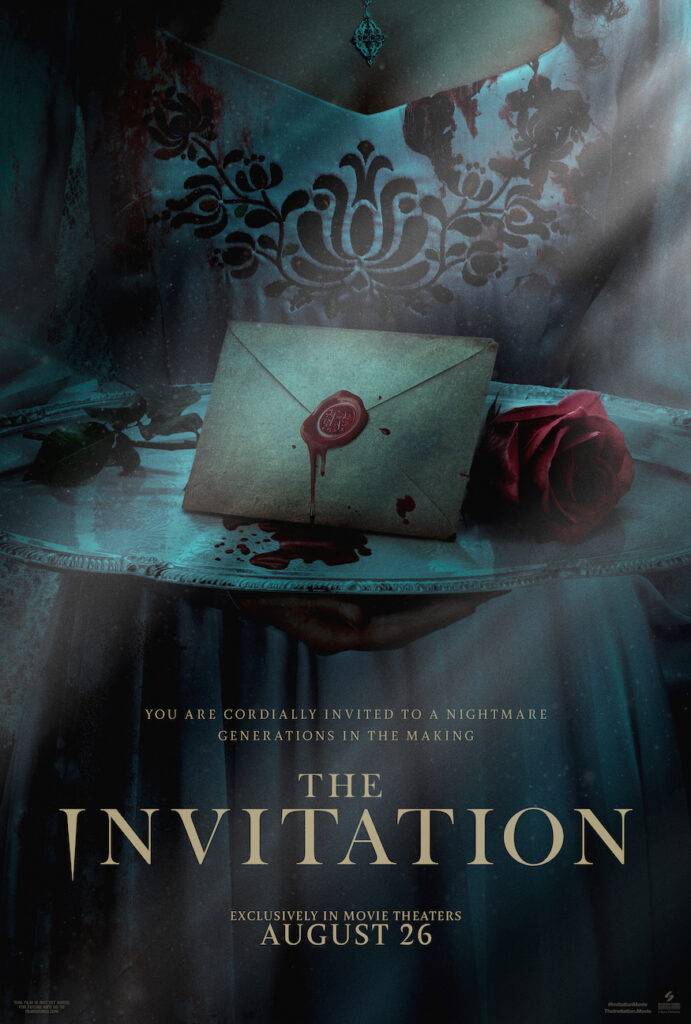 There have been many prior Gothic romances involving vampires, so what did you try to do differently with this one?

I really believe it’s about Evie’s character, and the fact that it’s a modern telling of this story. When we meet her, she’s a bit of a down-and-out artist in New York; she’s doing the artist hustle, working survival jobs, and she’s just recently lost her mum and realiing she’s kind of all alone in the world. So she takes this DNA test, which I think is a really modern way to get into the story, and it’s literally your blood, and–it’s vampires! It’s the perfect motif, you know? And when she meets this long-lost cousin, she’s searching for human connection, and that’s what makes her go on this journey.

Were the references to DRACULA present in Butler’s draft, or did you add those as you developed the film?

Well, there are over 90 Easter eggs from DRACULA in the film! A lot of them were in Blair’s original script, and then I was just like, “Let’s push it and add more! I love the original novel, so let’s be inspired by it.” There are also nods to other vampire movies and horror films, some of which are visual, so they’re not just in dialogue or character names; they’re actually in the world. For instance, the shrike birds that impale their prey–that’s based on Vlad the Impaler, who inspired Bram Stoker’s DRACULA.

Since the presence of vampires is revealed at the beginning of the third act, were you concerned that dropping those references might give the game away early?

To me, there are enough people who are horror aficionados that I think would enjoy figuring it out early. I’m someone who likes to be, “Ooh, I figured out the twist,” before everybody else does. But you’d be surprised; it’s such a small percentage of the audience that really remembers Stoker’s original text. For instance, people [at early screenings] don’t pick up on Harker, they don’t pick up on Carfax Abbey, they don’t pick up on De Ville. It’s really quite surprising. We did change the name of the butler [played by Sean Pertwee] from Renfield, because we felt that one was a little bit too much, to Mr. Field. 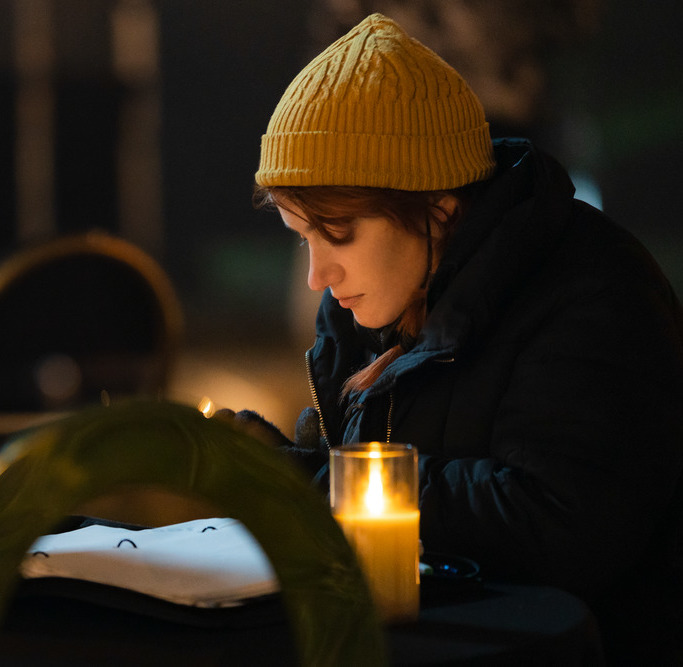 Given that THE INVITATION is about class conflict, was it always your intention to cast an actress of color in the lead, or was Emmanuel just the best actress you saw for the part?

It wasn’t in Blair’s original script, but I thought, like you said, when doing this commentary on classism, I felt having Evie be a woman of color would add another layer to that. And to be honest, Nathalie Emmanuel was always at the top of my list. I’ve always thought she’s an incredible actress and hasn’t been given, other than Missandei in GAME OF THRONES, the parts she deserves. I knew she had so much more breadth and talent than the roles she was often being given. She really shines in this film, and I can’t believe this is her first time being #1 on the call sheet, but she well and truly deserves it.

Did Emmanuel’s experience on GAME OF THRONES help when it came to doing the action scenes?

Oh, absolutely, oh my God. Actually, to be honest, all of our actors were so ready for it. They all did stunt training, and she was probably the most experienced in that, along with Sean Pertwee. They have incredible control over their bodies, and what they’re able to achieve. Of course, when a stunt was too dangerous, we used body doubles and things like that, but I don’t think there’s much that Nathalie hasn’t done at this point in her career. She was definitely a fast learner, and someone who commands that physicality.

What was the process of finding an actor with the right chemistry to play Walter?

I actually didn’t know who Thomas Doherty was! I know he’s quite big in the YA world, but he just came to me and read for the role, and when I saw his audition, I was immediately captivated by him. I thought he just had all the goods, and his presence, the control he has over his body and movements, was really alluring. I’m usually a pretty good judge of character, so once I got to chat with him, and I knew Nathalie was our lead, I could tell that they would hit it off; they have a similar sense of humor. And then I built on that relationship in rehearsals. Rehearsals are very important to me; whatever time I’m allotted for them, I always ask for double! You need that time to build up trust, and help the actors understand their backstory and work on that together, to build that intimacy and connection and chemistry. So we did a lot of work in rehearsals to build their rapport with each other.

Was filming in Budapest an attempt to be close to the source of the mythology, or was it just the best and cheapest place to shoot?

[Laughs] It was more the latter, but I will say I absolutely loved shooting in Budapest. It’s an incredible city and country, and the crews there are phenomenal, they’re some of the best. In Hungary, you really get your bang for your buck. And what was great was having that extra layer of history there, because we got to visit all these beautiful castles, and underneath Buda Castle was where Vlad the Impaler was imprisoned for 14 years. So to walk through that prison was quite haunting. I’m glad we shot there, because it did feel like going back to the roots.

What was the most memorable day on set?

Oh gosh, most of them were memorable. I’d say the rehearsal-dinner thing, because obviously it’s the big climax where so much is revealed and so much changes, and that’s always fun. But it took us three days to shoot, and that food really started to rot, so it smelled awful in there. There was a lot of meat, and Nathalie’s a vegan, so I felt so bad! I remember every time I would call “Cut” and walk into that room and get that wave of rotting food, it was disgusting [laughs]!

The trailer gives away an awful lot of the movie; what are your feelings about that?

Not my choice; I’m not someone who wants to see everything in a trailer. That’s not my cup of tea. I actually prefer teasers–you know, the 15-second grabs where you just get the look and feel of the film. But I really trust my partners at Sony, now that it’s working and people are really excited to see the movie. And I’ve heard a lot of people say that they watched the trailer and watched the film and found that it didn’t give away all the mood and atmosphere and everything, like the relationship and the buildup, so I’m glad it’s working both ways.