Among the year’s creepiest and most resonant achievements in the horror genre is THE HARBINGER, the latest feature from rising genre auteur Andy Mitton. We have exclusive words with Mitton and HARBINGER producer Richard W. King below.

THE HARBINGER (no relation to Will Klipstine’s same-titled film from earlier this year), in theaters and on VOD today from XYZ Films, is the most emotionally authentic fright film yet to arise from the COVID era. Gabby Beans stars as Monique, who travels from upstate New York to Queens during the worst of the pandemic to check in on her friend Mavis (Emily Davis)–against the wishes of Monique’s brother Lyle (Myles Walker) and father Ronald (Ray Anthony Thomas), with whom she’s been sheltering. Mavis has been afflicted with nightmares about the title phantom, which appears in a dark shroud and plague doctor-esque mask; when Monique arrives at Mavis’ apartment, her psyche is also invaded by the malevolent being. THE HARBINGER, which Mitton and King discussed with us following the world premiere at Montreal’s Fantasia International Film Festival, is both deeply eerie and has a lot to say about emotional resilience in the face of ongoing tragedy. (See our review of the movie here, and for more on THE HARBINGER and Mitton’s career, pick up RUE MORGUE #209, now on sale.)

How was it mounting the HARBINGER production during the worst of the pandemic?

RICHARD W. KING: It was a lot of stress, especially early on, trying to figure out how to deal with keeping everybody as safe as possible while still being able to do the things we needed to do: telling the story, capturing the horror and scaring the audience. I remember reading a lot of news articles, the return-to-work agreement with the unions, just dealing with all that stuff. Because our cast were SAG members, we had to deal with the union, which was fine. But since they say that quarantine time is work time, that was what made us decide to shoot in [upstate] New York and try to actively hunt down theater actors who were in the city, so they wouldn’t have to have that mandatory quarantine period coming in from another state. 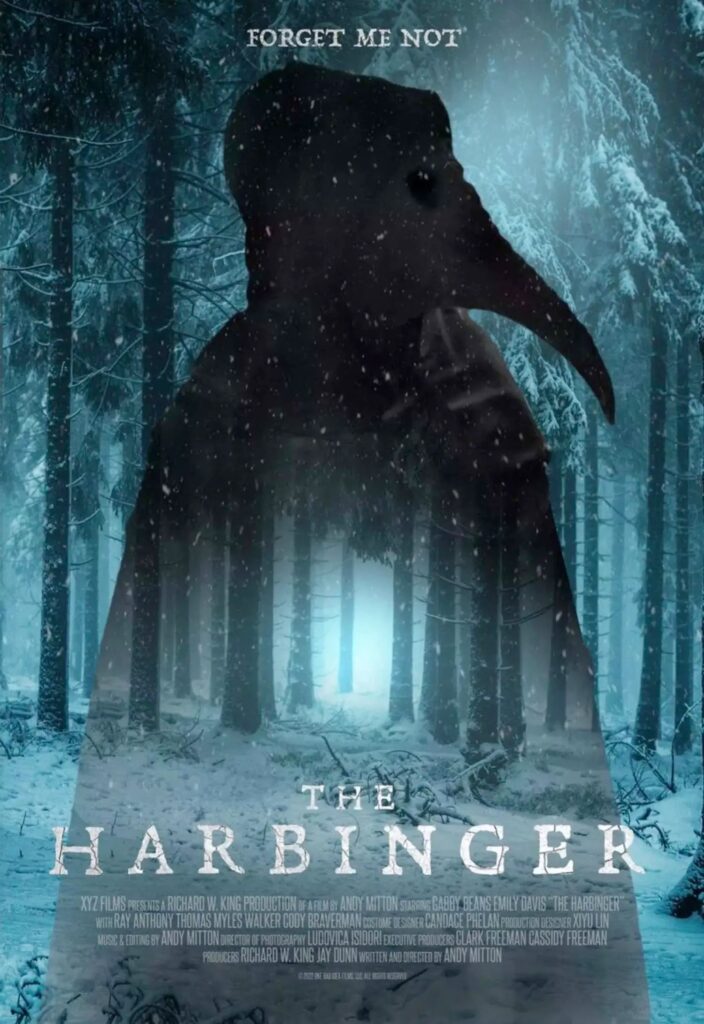 It was certainly a big added question mark in an industry that is already full of question marks, so it was very difficult. But I believe we got to a place where things started to fit into place; we found locations, we found people, we went to Binghamton and that community embraced us. Once we started landing all these pieces, it was a big weight lifted off. The testing was what it was, and we were able to get it done, but it was just an additional stressor on top of already trying to mount something with a small amount of money, trying to achieve something much larger in scope.

Talking about New York, do you think the pandemic experience in that city was different from how it was in other parts of the country?

ANDY MITTON: I do. I believe that that early period of time, when the National Guard was in White Plains or wherever they were, and Brooklyn was overrun and all the hospitals were full, was unique. During that time, I was in Connecticut, tucked away with my family, so to draw on that, I had to be more of a listener. And really, my main source there was my sound mixer at Soundtrack New York, Dan Brennan. He was in his Brooklyn apartment during the height of the New York pandemic, and he knew all those sounds very well. Part of what helped us create that was, Binghamton naturally sounds more “dead” than New York City, so that silence outside that normally wouldn’t have played well for the city was perfect for us. And then drawing the soundscapes of the sirens; usually, you’re trying to cut the sirens out of your film, and we were trying to loop them in instead, and kind of trigger what it was like to be there during that time.

Most of our actors came from within the city as well, and brought their own experiences that they’d been going through into the project. We had a lot of great conversations early on over Zoom, where we didn’t have to worry about the physical aspects or the blocking or where the camera would be; we got to know not only the scenes and the material, but what our individual experiences during this time had been, and feed it all into the pool so it would be there when we got together to shoot.

So was the whole movie, including the Queens stuff, shot in Binghamton?

MITTON: Yes, absolutely everything. It was our 1st AD Nicholas Gray, I guess, who decided we were in Rego Park if we were anywhere, because there are some expanses and parking lots and stuff there that we could pull off in Binghamton.

Was it a specific decision to have an African-American family as your key characters, or were they just the best actors you found?

MITTON: You know, it happened that way. The shooting script did not specify a race for the characters, but I also knew I didn’t want them all to be white; I just didn’t think that was interesting. But I didn’t know how it would go, and so from there it was just the way it fell together. I would never have set out to write a movie about race; I don’t think I’m the right guy. But I’m very happy with the way that turned out, and perhaps their own lived-in experiences fed into the movie in a positive way.

Who was the first person cast?

MITTON: Emily Davis was first. She had been playing Reality Winner in an off-Broadway show called IS THIS A ROOM that had been really acclaimed but had to shut down, and since then it’s been to Broadway and she’s done all kinds of great things. In our circles, in the theater community in New York, if you had asked around at that time we were casting who was getting everyone excited, Emily was on the tip of everyone’s tongue. I saw her in HIGH MAINTENANCE; that show was like my casting director for this movie, because it was kind of a showcase for all the best actors in New York, stage actors in particular, doing great, small, understated screen work. There’s that misconception that stage actors are going to be too big for the screen, given what they’re trained for, and I found it to be exactly the opposite, that they’re hungry to be able to do those small gestures. And Emily was just fabulous. She was the one who actually led us to Gabby, because she had just seen Gabby in a play, so it all just went from there. Then around Gabby, we built the family.

Was the plague doctor visage always part of the Harbinger concept?

MITTON: Yeah; I’ve always been afraid of that image. I was even sort of afraid of, like, “Spy vs. Spy” comics in Mad magazine [laughs]. I think we’re always trying to get at the uncanny; that’s an important word in a certain kind of psychological horror, or David Lynch films or things like that. It’s that wrong feeling that you almost can’t put your finger on. And then we had a great mask designer, Moung Hui Park; she had been head of makeup on MINARI and was recommended by a friend, and she was amazing at taking the familiar image and not just replicating it but evolving it into something more sinister. We brought the beak way down and gave it a particular point, and tried to make the Harbinger feel ancient, timeless. That was the key point.

And then Jay Dunn, playing the role behind the mask, was the other factor, because he’s highly physically trained. He’s worked with masks, he’s worked with his body a lot and he’s just great at that. That was the other key: to have someone who would understand very well what he was projecting, and have that sort of intelligence to bring it to life.