Exclusive Interview: The director and stars of the Irish haunted-house chiller “THE CELLAR,” Part One

We’ve seen quite a bit of atmospheric scare fare come out of Ireland in the last several years, and the latest chiller from the region is THE CELLAR. RUE MORGUE spoke to writer/director Brendan Muldowney and stars Elisha Cuthbert and Eoin Macken about the film, which arrives in theaters this Friday, April 15 from RLJE Films and the same day on Shudder.

THE CELLAR is Muldowney’s first outright fright feature after several features (including the 2013 Pollyanna McIntosh-starrer LOVE ETERNAL) and shorts tinged with genre elements. Cuthbert and Macken play Keira and Brian Woods, who move into an expansive and remote new home in the Irish countryside with their teenage daughter Ellie (Abby Fitz) and younger son Steven (Dylan Fitzmaurice-Brady). Already troubled, Ellie isn’t dealing well with the move or their new home–and then one night, she vanishes while her parents are out. Desperate to find her, Keira begins looking into the house’s history and discovers a supernatural evil hovering over it that’s also tied to ancient alchemy and mathematics. Muldowney, Cuthbert (previously seen in HOUSE OF WAX, CAPTIVITY and as the frequently imperiled daughter of Kiefer Sutherland’s Jack Bauer on TV’s 24) and Macken (whose genre credits include THE FOREST and A HOLE IN THE GROUND) spoke with RM following THE CELLAR’s world premiere at this year’s SXSW film festival.

Ireland has a great history of supernatural literature, and more recently has seen the making of some great folk-horror movies. How did all that influence THE CELLAR?

BENDAN MULDOWNEY: I think it’s in our DNA as Irish people. We grow up not just with ghost stories, even though those are there, but also fairie stories and all sorts of dark tales. And the recent genre filmmaking from Ireland–you know, I would like to think that I’ve had some part in that new movement, even though with my movies, you couldn’t say, “That’s a ghost story,” but every single one of them has played on the fantastic-film-festival circuit, the genre circuit. They’re made for that, they’re slightly demented, they’re for adults. It’s fantastic that Ireland has a confidence now in terms of genre filmmaking, and I’m glad to be part of that wave. 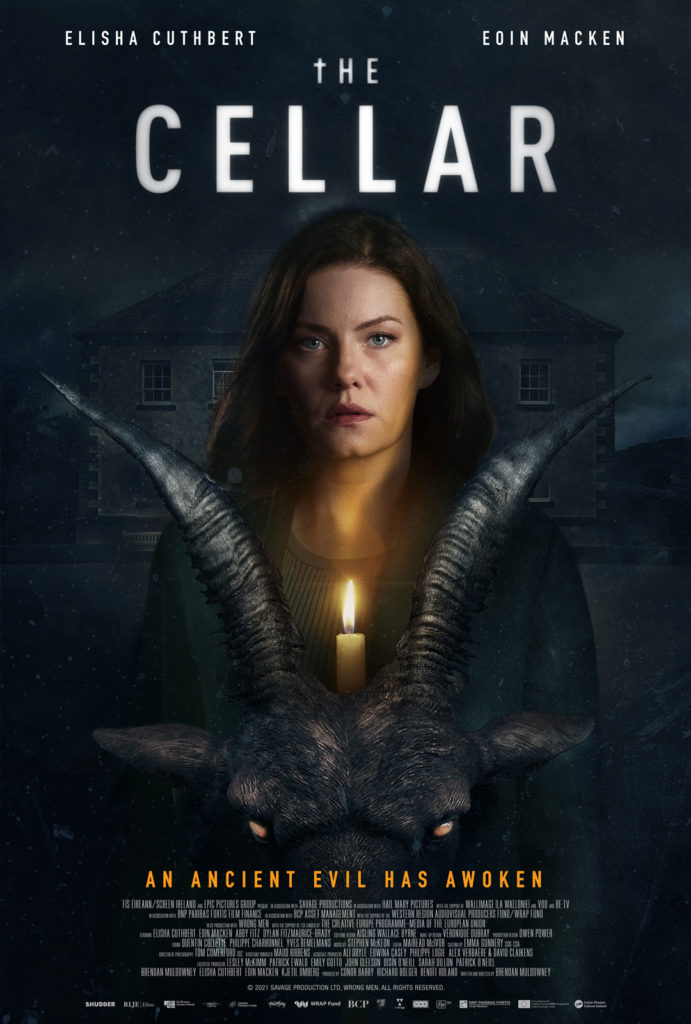 What led you to make THE CELLAR as your first true horror feature?

MULDOWNEY: THE CELLAR is based on a short film called THE TEN STEPS that I made years ago; that was in 2004, and I would have written it around, I would say, 2000. It has been very successful, and over the years I’ve seen a lot of comments on-line from people asking, “What would happen next?” So I suppose for years I’ve always been asking myself: Could I pull it off, could I write a feature? And I know this sounds simplistic, but I did want to make a film that my daughter could see. She’s always asking me what my films are like, and the older she gets, I look at some of them, particularly LOVE ETERNAL, and go, “Oh God, I’m going to have to talk her through that one!” So I just wanted to make a film that she might enjoy.

It’s interesting that you’d say that about a horror film, though THE CELLAR is pretty subtle as a genre work; it’s largely about the atmosphere. Can you talk about your approach to that?

MULDOWNEY: Well, the original short was inspired by Robert Wise’s THE HAUNTING. It’s not the only film of that type out there, but it was just a “Eureka!” moment for me, where I watched a movie and thought, “There’s no gore in this, it’s all atmosphere and cinematic camera moves,” and I wanted to try to make a film like that. That’s where THE TEN STEPS came from, and I tried to carry that through into THE CELLAR, because–I keep saying this, but it’s important–THE TEN STEPS won Best Short at the Sitges Film Festival in 2005, and it also won Best Short at the New York International Children’s Film Festival. So it was for genre fans and for children, and I wanted the feature to work for a broader audience. And you know what? There’s nothing wrong with a film that’s atmospheric. You don’t necessarily need to see everything; your own mind can be quite scary.

How did you arrive at the idea of using mathematics as part of the basis for the horror, and is that something you’ve long been interested in?

MULDOWNEY: That, I would say, came from a comic I read years ago called THE THIRTEENTH FLOOR, which was written by two JUDGE DREDD writers [John Wagner and Alan Grant] from 2000 A.D. It was about a lift in a tower block, and there was a superstition that led them to leave out the 13th floor, but whenever the lift didn’t like someone, it would take them to a 13th floor that was a surreal sort of world where anything could happen. In fact, I had a scene in the film where Dr. Fournet [Aaron Monaghan] gets stuck in a lift that goes down through the ground, and that was going to be my homage to THE THIRTEENTH FLOOR. But it was too expensive, so that went away.

Elisha and Eoin, are either of you parents, and if so, how did that play into the ways you approached your characters?

EOIN MACKEN: I am not a parent, but Elisha is, so I’m sure she’s more educated on this one!

ELISHA CUTHBERT: Yeah, I am, and that was a huge part of my understanding and relating to the characters, especially Keira. I felt like I understood that fear you have as a parent, that you don’t want anything to happen to your children, and you’d do anything to protect them. There was something so honest about Keira’s journey, in the sense of, how does she step up to the plate and face this entity, this demon? How could someone be so strong? And there’s no other reasoning for it than to protect her kids, and I completely understood that and thought it was something I could draw on, that completely made sense to me. I think it’s brilliant to touch on those fears. And then you add another realm to the story, and it really takes you to another place. So that was a huge thing for me, especially at this point in my career, now that I am a mother.

MACKEN: I was just going to say, since I don’t have kids, when one of them went missing, I was like, “Oh, well, that makes my life easier, you know?” [Everyone laughs]

Elisha, having played a daughter whose father spent a lot of time rescuing her on 24, how was it playing the other side of that situation?

CUTHBERT: It was a lot easier [laughs], I’m not gonna lie. Abby, who plays Ellie in the film, is a great actress, such a beautiful talent; I had a lot of conversations with her on set about how I’d been in her shoes, and had to play the other side of this, and find ways to draw on things. Because when you’re a young actress, you don’t have a lot of life experience, but you have to bring so much depth to a character. So I applaud Abby; she did a wonderful job in THE CELLAR, and you really feel her fear and her sadness throughout. But yeah, when I was playing Kim Bauer on 24, I really had to find a way to navigate those treacherous scenes at such a young age. Whereas with Keira, I have these fears about the well-being of my children, so I had something real to draw on and bring to the table.

Brendan, how did you find that perfect house location, and was everything shot there or did you do a lot of set work as well?

MULDOWNEY: The only set was the cellar. We had to shoot in the west of Ireland, and then it got narrowed even further down to a county called Roscommon. And I wasn’t sure we were going to find what we needed–not only for the house, but for an advertising agency that’s in a city. And the day we drove up the driveway to that house…well, no, you can see the house and you don’t know, but the minute I walked in the front door, I knew it was the right place. It had that big open hall, and something I was really looking for, which was a long corridor. It didn’t have a door at the bottom, so we did have to build a fake door, where when the characters turn left, they supposedly go down the steps, and that’s where we made the join for the set.