We’ve all jumped while watching a “screamer” video on-line, and now a full feature aims to scare you with the tale of one such clip that portends true terror. RUE MORGUE got exclusive words with writer/director Dean Ronalds and writer/actor Tom Malloy about their Dread Central Presents release #SCREAMERS.

Playing select theaters this Thursday-Friday, April 5-6 and then hitting VOD April 17 (see details at the DCP Facebook page), #SCREAMERS also stars Chris Bannow, Griffin Matthews, Abbi Snee and Emanuela Galliussi. The story focuses on the team behind the website Gigaler.com, who have found success showcasing viral videos and one day receive a particularly frightening screamer. When they discover that the girl featured in the clip is identical to a real young woman who vanished years before, they go on a search for answers that leads them into life-threatening situations. Filmed in Rochester, New York (with scenes shot at the grave of Francis Tumblety, a man some believe to be Jack the Ripper), #SCREAMERS marks the first creative collaboration between Ronalds (whose previous films include the vampire comedy NETHERBEAST INCORPORATED) and Malloy (who also scripted and co-starred in Mary Lambert’s THE ATTIC and Rob Schmidt’s THE ALPHABET KILLER).

What were the inspirations behind #SCREAMERS?

TOM MALLOY: The first was the movie CATFISH. We had seen the original trailer, and it looked like it was a horror film! In fact, they play it that way somewhat in the movie. When they get to the house at night, it’s a tense scene! But there’s no payoff—it’s just that the woman is not who she claims to be. So we wanted to make a movie that felt just as real as CATFISH, but had a payoff.

DEAN RONALDS: I’ve always been a huge fan of old-school suspense and classic horror films. Alfred Hitchcock and Roman Polanski were always at the top of my list of the great masters—the way they orchestrated every moment, controlling the audience with anticipation instead of shock or gore. I’m not sure we did that with #SCREAMERS, but I always wanted to make a movie that was a slow burn, building anticipation. I feel we did do that. 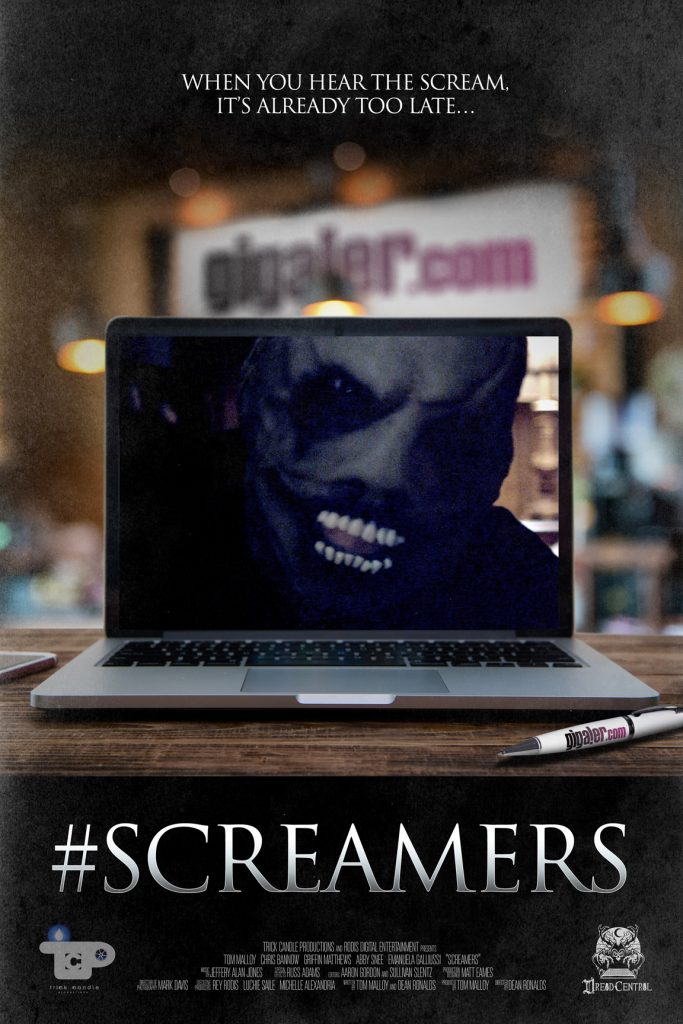 Did either of you, or any of your collaborators, have experience in the Internet/video world that fed into the storyline?

TM: Yes, I had a long friendship with one of the early Internet success stories, Eric Bauman of Ebaumsworld.com. He served as a creative consultant on the film: We brought him in, and he made sure all the elements regarding the website and web company were realistic.

DR: Having Eric on the set was great. His presence was a fundamental necessity for the story and characters’ reality, as well as for the environment we created for everyone to work in.

Are there any particular “screamer” videos that you’re fans of?

TM: Yeah, the original German “Ghost Car” commercial that started it all. That was the screamer everyone initially knew. Other personal favorites include the Flash Maze game where you get to the third level and then it shocks you. Honestly, that one made me spill a coffee on my lap. You get so sucked in, and that’s what makes the videos so great. They require you to focus on something first, so the scare becomes more intense!

Having both made narrative genre features before, how did you adapt to shooting in the found-footage format?

TM: Dean and I both stressed that we didn’t like the trend of shaky cameras and bad acting you see in so many found-footage movies! We wanted to make ours more of a “docu-horror.” Much of #SCREAMERS is shot like a documentary. On top of that, we sought out the Digital Bolex camera, which doesn’t exist anymore but gives the feel of Super-16mm film. All of this was new to us, but we loved the approach.

DR: Whenever I approach something I’ve never done before, it’s important to have a model for what I’m trying to create. So we did as much research and development as we could, to assure ourselves that we’d looked at all the models for how we wanted the film to feel tonally.

How much of the movie was scripted, and how much was improvised?

TM: We improvised almost all of the dialogue off of a 35-page outline. Each scene had the beats described, and it was up to the actors to get there verbally. All of them were able to move the scenes forward in such a successful way, there were almost no times when we had to keep shooting to find the right dialogue. It was almost always there right from the start.

DR: The outline was extremely detailed. In order to deliver natural performances, not only did the cast speak to Eric Bauman, but we also role-played and had about a week of rehearsals. Those were essential to the success of the storytelling and the believability of the actors and their interactions. We also brought the cast to Eric’s place of employment so they could get a feel for that environment.

How did you make #SCREAMERS distinctive among all the other found-footage features out there?

TM: We wanted to take ours to the next level. As I said, “docu-horror”—something that blurs the line between reality and horror so that the audience gets so sucked into the story, they don’t know they aren’t watching reality! That’s what happens with #SCREAMERS. It feels so real for the first 45 minutes or so, you think this company actually exists.

DR: Making it as real as we could was essential. We focused on casting actors with a lot of improv and theater backgrounds, but who also had on-camera experience. We also didn’t want to move the camera a lot, but to keep it grounded, like the characters. Too often in this genre, the camera moves too much, and it distracts from the story. We knew we didn’t want to do that.

Did filming in that style pose any particular difficulties?

TM: The only real issue was lighting, which would come up during the night scenes. We wanted to make sure we could capture the scares—and there are a lot!—and not lose those with a handheld camera.

Any memorable/funny occurrences during the shoot?

TM: There’s a scene at the end where I walk into the creepy house with Griffin [Matthews], and I point to what looks like a prop dead rat in the corner. That was not a prop—it was an actual dead rat that was there in the house. The place was so scary and creepy; a relative of the owner committed suicide in it. You couldn’t pay either of us to spend a night there.

Do you have any horror-oriented collaborations coming up?

TM: The one we’re looking forward to and hoping for is #SCREAMERS 2! We’ve already written a loose outline. We’re hoping we can explore more of the Jack the Ripper angle, as well as the quest to find truth amongst Internet hoaxes. And then #SCREAMERS 3 and 4!

DR: We’ve also considered an alternate #SCREAMERS—not a sequel, but a version that takes place during the same timeline as the first film. A prequel could work too. We’re also working on some completely new horror movies that are definitely sick and twisted, and that we know audiences will enjoy.