Now on VOD from The Orchard following a strong reception on the festival circuit, SUPER DARK TIMES is a fascinating, disturbing portrait of teenage turmoil and violence that marks first-time feature director Kevin Phillips as a true talent on the darker side of cinema. He gave RUE MORGUE this exclusive interview about the movie’s inspirations and creation.

Scripted by Ben Collins and Luke Piotrowski (SiREN), SUPER DARK TIMES focuses on high-school best friends Zach (Owen Campbell) and Josh (Charlie Tahan from John McNaughton’s THE HARVEST) in a mid-1990s small town. They’re hanging out with their loudmouth friend Daryl (Max Talisman) and junior high-schooler Charlie (Sawyer Barth) when a horrific tragedy strikes, and the aftermath is deep psychological trauma and violence that also encompasses their friend Allison (Elizabeth Cappuccino). The finely tuned character work by Phillips and his cast accentuates the growing unease that is punctuated by moments of truly unsettling violence, resulting in a film that mixes the drama, thriller and horror genres into one gripping whole.

Were you concerned about how people might view a movie that’s concerned with teen violence, considering what a hot topic it is these days?

Absolutely. That fear kind of kept me at bay at first, but it was also that fear that, essentially, I needed to exorcize. The themes in this film were very interesting and enticing, yet made me apprehensive when they were first presented to me. I really wanted to do justice to them, and it took me a while to come around to making the movie, because of the polarizing quality of the material. At the end of the day, though, it was those themes that won me over, in the sense that I felt it was a very important and timely film to make. That’s what the medium is for—to challenge not only yourself but also audiences with important themes. 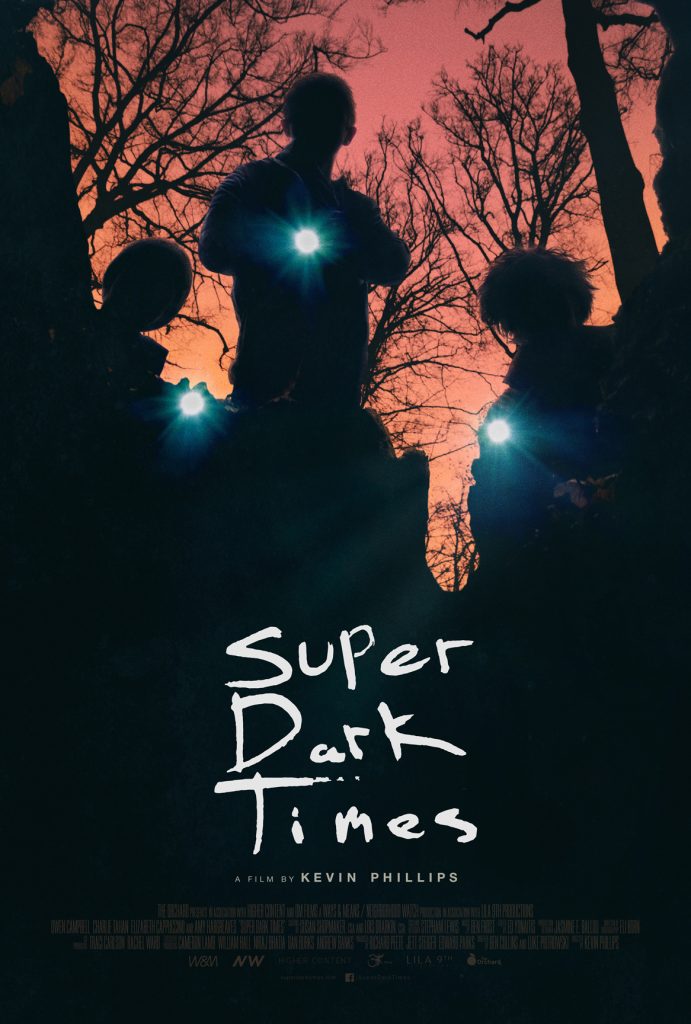 We had done a short film in winter 2014 called TOO COOL FOR SCHOOL that was a point-of-sale piece for this, and acted as an avenue into it. It was set in the same cinematic universe as SUPER DARK TIMES, from a craft perspective as well as the mid-’90s setting, and similarly dealt with youth, masculinity, sexual frustration and teen angst.

Collins and Piotrowski have specialized in straight horror scripts (also including the upcoming Blumhouse production STEPHANIE); was the same originally true of SUPER DARK TIMES, or was it always a blend of horror, thriller and dramatic elements?

We approached the film as more of a dramatic place. For me, it’s primarily a tragedy, and I brought a lens to the material with that in mind. I’m actually a coward when it comes to horror. I don’t usually do horror well; it’ll ruin me for months, depending on the film. That said, Ben and Luke are extremely close friends I’ve had for 12 years now, and whose sensibilities I adore. The fact that they do a lot of horror work appeals to me; it allows them to work conceptually with themes in a unique way. That’s one of the more fascinating things about the genre: the way you can apply different themes to it and approach it from a certain perspective. Ben and Luke also have a very acute sense of rhythm, and an understanding of cinema, in the way they write. They’re very detail-oriented, and their writing allows me to immediately visualize what’s on the page.

We used to call SUPER DARK TIMES “nostalgia horror,” but I kind of stepped away from that, in order to shed the notion of it being strictly in the genre. But I will say that there are horrific elements in it, and we do utilize genre in this film in myriad ways, to serve as a vocabulary for the audience. Ben and Luke naturally brought their own influences to the writing, from the 2000 Japanese film EUREKA to A NIGHTMARE ON ELM STREET, which I know was a big foundation for them as kids.

Nostalgia horror has been very popular lately, in the likes of STRANGER THINGS and IT. Why do you think it has become in vogue recently?

Well, I can say that we made this movie before we knew what STRANGER THINGS was. I mean, we were after Winona Ryder for a moment to play Zach’s mom, but she was busy on STRANGER THINGS, which we didn’t realize until after the fact. Fortunately, we landed Amy Hargreaves, who was a godsend and a phenomenal talent. Anyway, we wanted to make an authentic movie, and we felt that the best way to do that would be to mine our own personal experiences as teenagers in the ’90s. And given the thematic and narrative aspects of that, we wanted to bring a lens to American suburbia before Columbine, before the Internet, before cell phones, when things were very different—before white male youth became a focal point of fear. We wanted to explore that potential undercurrent, and the fragility of youth—particularly masculinity—in a timeless way, to give a sense that it has always been fragile, it has always been problematic, it has always been easily distorted.

I think a lot of the people who are making movies today were in their youth in the ’80s and ’90s, and especially with first films, I recognize the desire to go back to what you know, to your foundations, to the things that were formative for you. We didn’t want to make a nostalgic film as such; by definition, this movie is not a nostalgia piece, it’s a tragedy.

It’s refreshing that SUPER DARK TIMES doesn’t use a lot of the easy music and pop-culture signifiers that many movies do to set a sense of the period.

Yeah, we didn’t want to do that. I trust the audience to be intuitive and intelligent. I certainly didn’t want to beat them over the head; there’s nothing more obnoxious than that. At the same time, we were trying to bring a light to the timeliness of these themes. It’s important on one hand that it’s set in the mid-’90s, but it’s not the end-all and be-all thing, because ultimately, it’s not about 1995, it’s about teenage friends and this tragedy that occurs, and it just happens to take place at this point in time.

Are there any scenes in the movie that specifically relate to your own past?

SUPER DARK TIMES depends on a number of unexpected story turns and surprises. What are your thoughts on making and releasing a film like this in the Internet age, when it’s so hard to keep secrets under wraps?

At the end of the day, you only have so much control. When it came to making this film, we didn’t know who was going to watch it; it was insane for us that we were even given the chance to make this movie, let alone have the opportunity for somebody to watch it. So it was in our best interests not only to bring a uniqueness to it, but to make something we all thought was righteous and great cinema. We just stepped in there, being students of art and lovers of film, to create something we wanted to see, and that felt intuitively correct.

When it came to marketing the movie, the question came about of how much of the inciting incident we wanted to reveal, to which I said, “None.” In the most extreme sense, I would rather there be nothing. I wish this movie could invisibly market itself, you know? I feel, even in the synopses I’ve seen, that there’s too much revealed. But that’s just not the way it is. I mean, I watch too many trailers, as a filmmaker, and I know too much going into certain movies. I do feel that SUPER DARK TIMES functions best when you don’t know what’s around the corner, but I don’t think we’re unique in that respect. I believe most movies can operate that way. But I don’t mean to take away from any gratitude I have; I am nothing but humbled by the opportunity to share this movie with people. And so I’ll take it as it’s given.