It’s a big week for horror-script specialist Jeff Buhler: The new trailer for his PET SEMATARY remake dropped this morning, and tomorrow sees the release of his malevolent-child chiller THE PRODIGY. We chatted with Buhler about PRODIGY and another of his forthcoming reboots: the update of the 1990 classic JACOB’S LADDER.

In THE PRODIGY, released by Orion Pictures, Taylor Schilling stars as Sarah, mother to Miles (IT’s Jackson Robert Scott), a little boy of exemplary intelligence. But he also has a dark side, expressed in nasty words and violent deeds, and the film follows Sarah as she struggles to reconcile love for her son with the realization that he is imbued with evil—and attempts to purge it from the boy. Directed by Nicholas McCarthy (AT THE DEVIL’S DOOR, THE PACT), THE PRODIGY was inspired by Buhler’s own experiences as a father.

“When I was initially talking to producer Tripp Vinson about the project,” he recalls, “my son was a toddler, at that age when kids begin to have dreams. They’ve learned language, and they talk in their sleep in these restless moments when they’re having nightmares or something’s stressing them out. I would be riveted by this experience, because I would stand in my son’s bedroom and listen without waking him up, because I was convinced I was going to hear Latin or Aramaic or some other language. You know, after seeing too many OMEN films, I was convinced something supernatural was happening here.” 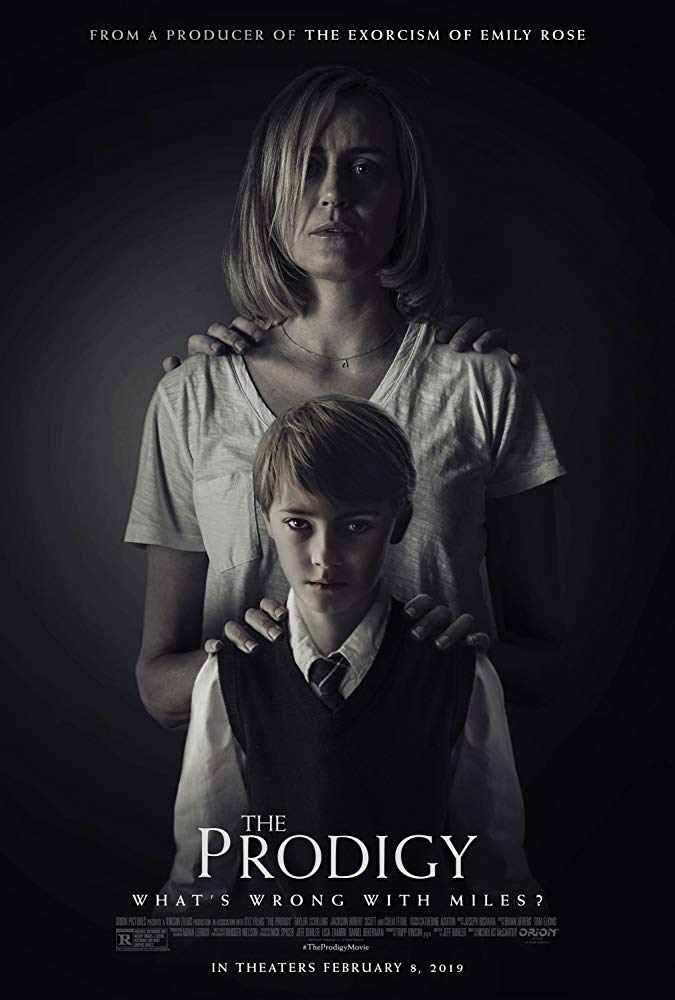 It is what Miles says when he’s awake that results in some of THE PRODIGY’s most striking moments, particularly when he talks back in most profane and hostile way to hypnotherapist Arthur Jacobson (Colm Feore). Buhler admits that when writing the screenplay, he didn’t consider what he was requiring a preteen actor to perform. “I was so in the world with Miles that I did not even ponder it. Then Nicholas came on board and said, ‘You know, we have to have some 8- or 9- or 10-year-old say this stuff,’ and I was like, ‘Oh my God, what have I done? What are the parents going to think?’ And he was very clever in how he approached it. For the most controversial dialogue, Jackson spoke similar lines that were less extreme, and then we did a bit of trickery with adult actresses who could mimic his voice. There are a few places where it steps across the line, and those were the ones we cherrypicked to save Jackson from being scarred [laughs].

“And by the way,” Buhler continues, “he’s so professional and cool that I believe he would have rolled his eyes and said, ‘Whatever. I’m not even sure what this means, but don’t worry about it.’ It’s really about the parents, it’s about the kid, it’s about respecting the work atmosphere and that these children still have childhoods, and you want to protect that. They’re 8 or 9 years old or whatever, and you don’t want to destroy that.”

Right about now, JACOB’S LADDER was also supposed to be on screens nationwide; it was dated for a February 1 debut some time ago. That date held until the beginning of this year, when distributor LD Entertainment finally acknowledged that the movie would instead open on an undetermined date later in 2019. “I think that was because the market had a whole handful of these movies—and maybe I inadvertently had a hand in this, because THE PRODIGY was slated for February 8,” Buhler muses. “ESCAPE ROOM was coming out, and there were a whole bunch of other psychological thrillers and horror films stacked up for January and February, so they bumped it to later in the year. They announced that original date, but then when they moved off of it, they never announced that fact. So everyone was operating under the assumption that it was opening February 1, but that wasn’t the case.”

In the new LADDER, directed by David M. Rosenthal, the focus is on two brothers instead of one protagonist, and the backstory deals with the war in the Middle East rather than Vietnam. “The concept is really about the experience of coming home and readjusting, which is very present and poignant in the original film,” says Buhler, whose script was revised by Sarah Thorpe when he was unavailable. “Tim Robbins is a soldier who’s readjusting to life, and feels like a stranger in his own city and to his family, so getting those concepts out there and really living in that space in our film was important. Then we came up with a cool twist that’s different from the one in the original, but has that same spirit: You’re following this story with these characters, and then all of a sudden everything gets flipped on its head, and you’re like, ‘Whoa! Things are different than I thought.’ ”

In addition to its influential surprise ending, the original JACOB’S LADDER is also celebrated for the hallucinatory visions imagined by screenwriter Bruce Joel Rubin and brought to the screen by director Adrien Lyne. “I put in a ton of that” into the new movie, Buhler says, “and then I think in the final cut, there’s less of it. It’s pretty grounded, but there are definitely moments when the surreal stuff is there. We tried to lean into the practical approach that Adrien Lyne used, where his effects were almost all in-camera and done live on the set, and come up with stuff that would utilize those same techniques. Some of the classic images that you would expect in JACOB’S LADDER are in there, but then there are some different things. I don’t know if I would say it’s exactly the same amount, but we tried to come up with some big moments that felt like they had the same spirit as the first film.

“What we didn’t want,” he notes, “was to try to redo what Adrien did, and copy images directly from his film. We took a step back and looked at what the spirit was and what the effect was, and how something in the world of the film we were creating would express that. I would say this is more a reflection of the original film than a remake of it.”

Keep your eyes on this site for further words from Buhler on his upcoming projects!