Exclusive Interview: Rebecca Hall on the scary complexities of “THE NIGHT HOUSE”

Currently in theaters from Searchlight Pictures, THE NIGHT HOUSE is an absorbing and chilling supernatural drama that derives a great deal of its impact from the central performance by Rebecca Hall. The actress who also starred in GODZILLA VS. KONG this year took some time to chat about both movies with RUE MORGUE.

Directed by David Bruckner (who discusses the film here and here) from a script by Ben Collins and Luke Piotrowski, THE NIGHT HOUSE casts Hall as Beth, whose husband has recently died and who is responding with a complex mix of emotions. Fear is added to that palette when she discovers evidence that her spouse had been dabbling in dark forces, and she begins sensing an unnatural presence in their remote lakeside home. This is Hall’s first venture into occult territory since her equally compelling starring turn in 2011’s THE AWAKENING, and one of the best performances in any genre to be seen this year.

THE NIGHT HOUSE explores similar themes, of loss and haunting, to THE AWAKENING; did you respond to the script in a similar way?

Yeah, I think I did. There were some similarities, which I was maybe wary about as well. It was like, “Have I done a version of this already?” But then I thought, actually, no I haven’t, because this character is so distinct. I couldn’t shake her after I read the script; I couldn’t stop thinking about her. I loved the idea of setting up a classic haunted-house tale, with all of the tropes of those movies–a woman alone in a house, in an emotional state, with all the sort of pointers to make you feel kind of cozy on some level. And then there’s this element that isn’t remotely cozy, which is that the protagonist is a total loose cannon. She’s capable of doing absolutely anything, and she’s not going to leave the house, and she’s at a point in her life where she’s absolutely reckless and absolutely impulsive, and often very drunk. And she’s brittle and she’s funny and she’s angry, and I thought that was such a human portrayal.

One of the things that especially struck me about Beth was that very acerbic humor, particularly in the early scene with the mother of one of her students. How did you approach that side of the character?

That was the scene that hooked me in, the one where I said, “I want to do this” after I read it. I thought that was really the key to the character, and I remember saying to David, “Let’s find more of those moments, as many as we can.” Because that feels so honest. I think that humans at their lowest point are capable of making jokes, even if the intention of the jokes might be a way of expressing something other than trying to make someone laugh. I believe that the thing and its opposite are always present in people’s behavior, so I thought about that a lot with Beth. I thought about ways in which she could be wry, and her interactions with the ghost could be sort of confrontational and provocative. 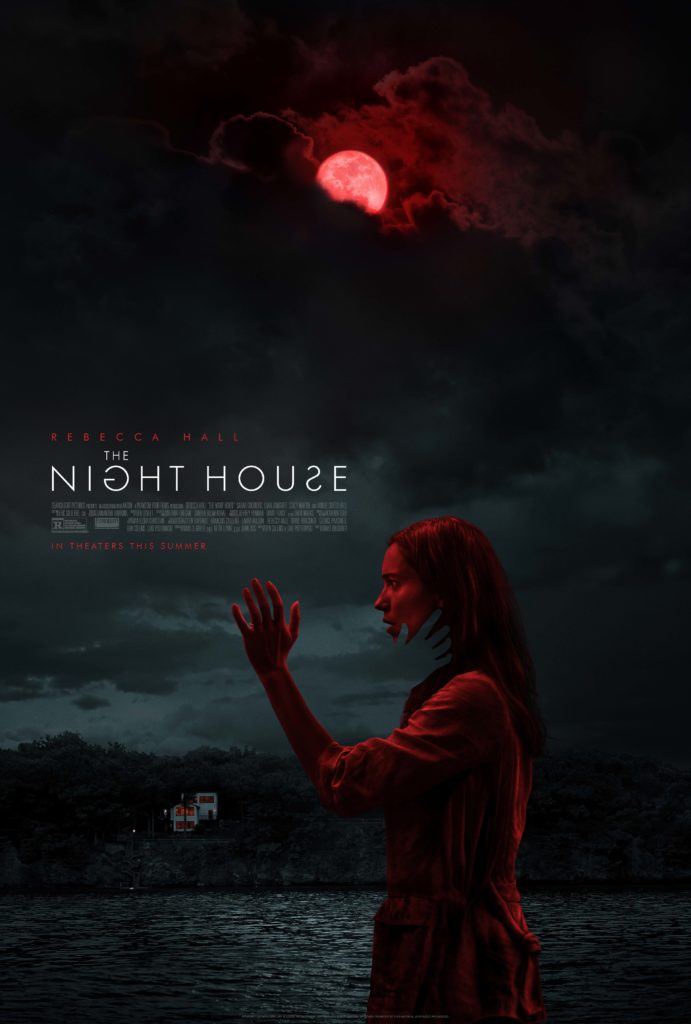 Further to that point, can you talk about reacting to a presence that wasn’t actually there, and the many scenes where it’s just Beth alone in the house?

It was a challenge, and a challenge I really wanted. This is where THE NIGHT HOUSE definitely departs from anything I’ve done before; I don’t think I’ve done anything where there was such a huge responsibility on just me, and I didn’t have other actors to bounce off of. You derive a lot of energy from the other actors on set with you, and sort of get buoyed by that energy. There wasn’t any of that a lot of the time on this movie, so it was very tiring and very intense, but it was the sort of challenge I relish.

Certainly my interactions with the ghost were quite bizarre, really, in retrospect. Prior to filming, I assumed that things would be very heavily choreographed, and there might be someone in a green suit who would be erased afterward or something like that. But this was not that budget level [laughs], and also, a lot of the effects were done in-camera; there was an aspiration to do it all practically as much as possible. It relied heavily on my imagination, and while there were some scenes that were of course very clearly organized with stuntwork for safety and all the rest of it, there were pieces that were very much David just saying, “OK, so this is when you nearly make out with the ghost in a bathroom. Let’s just roll and see what you do.” [Laughs] I definitely had to check all of my embarrassment at the door, and throw myself into it and see what happened. But it was incredibly liberating, actually, to do something that physical and just explore it. Some of it really worked and some of it really didn’t, and thankfully that’s on the cutting room floor.

You’re credited as an executive producer on THE NIGHT HOUSE; what did you bring to the project and your role once you were cast?

I think quite a lot, and yet not very much at all. There were certain things in the script that I quibbled about and were changed, but there was a lot that I thought was very strong and that never changed at all. David and I had a conversation about how to go about it, and we both landed on the fact that Beth is very impulsive, and I decided on some level that it would be truer to the character if I didn’t really know what I was going to do when he called for action, and I surprised myself. The approach was very instinctive; it was, believe that what is happening is happening, and then see what happens to my body and my voice. Often, I didn’t know what I was going to do, which was exciting. I never diverted too far away from the script, though; that can be unhelpful for everyone who’s thought about it for a long time.

In our interview, Bruckner talked about the fact that none of the movie was shot in sequence. Beth has such a complex arc in this film, so how did you get yourself into the right headspace for each scene?

Well, that’s true of every film I’ve ever done. Nothing shoots in sequence, sadly; it would be wonderful if it did, it would make my job a lot easier. I just did what I always do: I tried to know the script very well, and hold it in my head. I also make a very large chart where I map out the whole journey, a sort of mind map that I stick up on the wall wherever we are, so I can quickly look at it and know where I was emotionally before and where I’ve got to get to emotionally after the scene.

How did being in the impressive house location help with that process, and how much did you actually shoot there as opposed to on sets?

Most of it was in that house, and it was very fortuitous that they found one that fit the bill so perfectly, and was on a lake and did have that view and all those things you see in the movie. Right toward the end, we did a week on a soundstage where they recreated the house, and it was uncanny, because it looked just like the house I had become so familiar with, but everything was slightly off. The rooms were a little bigger, and sometimes the furniture was reversed. It had the same effect on me that it has on the audience, I think; you can’t quite place what’s different, but something is, and you’re disoriented and destabilized as a result.

How was the GODZILLA VS. KONG experience? Is that the biggest film you’ve ever done?

It probably is, that and IRON MAN 3. It was everything you would expect it to be: these huge sets and extraordinary things to look at. I never got to see King Kong, though, because obviously he was all CGI; I was mostly just looking at a tennis ball on top of a stick [laughs].

When you make a movie like that where you never see the monsters and effects while you’re filming, once you see the finished product, do you just become an audience member at that point, marveling at it all?

Yeah, definitely! You have no idea what you’re going to see, and you go, “Oh, that’s what I was looking at!” [Laughs] It’s great.

Were you any kind of fan of giant-monster movies before doing GODZILLA VS. KONG?

I’ve become more of a fan since doing it. I hadn’t seen many Godzilla films, and I found myself doing a deep dive and becoming quite fascinated with all the various incarnations of Godzilla, from way back with all the rubber-suit ones, which are so kind of brilliant and charming. I loved it all.