Opening in select theaters and on VOD this Friday from IFC Midnight, PLEDGE is a harrowing descent into frat-house hell, where hazing can be fatal. Read on for exclusive words with producer Keaton Heinrichs.

Directed by Daniel Robbins from a script by Zack Weiner, the film follows David (Weiner), Justin (Zachery Byrd) and Ethan (Phillip Botello), three college misfits who are having trouble penetrating the Greek culture until they’re invited to pledge an elite society of rich young men called the Krypteia. They arrive at a secluded mansion for their initiation, overseen by the intimidating Max (Aaron Dalla Villa), and are subjected to increasingly vicious rituals. Shot on locations north of Manhattan, PLEDGE is a well-acted, tightly told achievement for its young creators, including Heinrichs—the son of Oscar-winning production designer Rick Heinrichs (SLEEPY HOLLOW)—whom we spoke to following the movie’s world premiere at last year’s Fantasia International Film Festival.

Can you tell us about the evolution of the PLEDGE script?

When I first found out about the project, it was from JD Lifshitz [executive producer with Raphael Margules]. Basically, the premise was that three nerdy college freshmen were joining a fraternity, but it wasn’t actually a fraternity—at that point, the ending went down sort of a creature-feature path. There were goblins, there was an evil goddess in the basement; that’s how the movie ended. And we realized, before I moved to New York to make the movie, that we didn’t have the budget to properly do that. So we ended up making something more grounded in reality, something that was closer to home, and that speaks to people who have actually pledged, while also staying far enough away from actual Greek life. 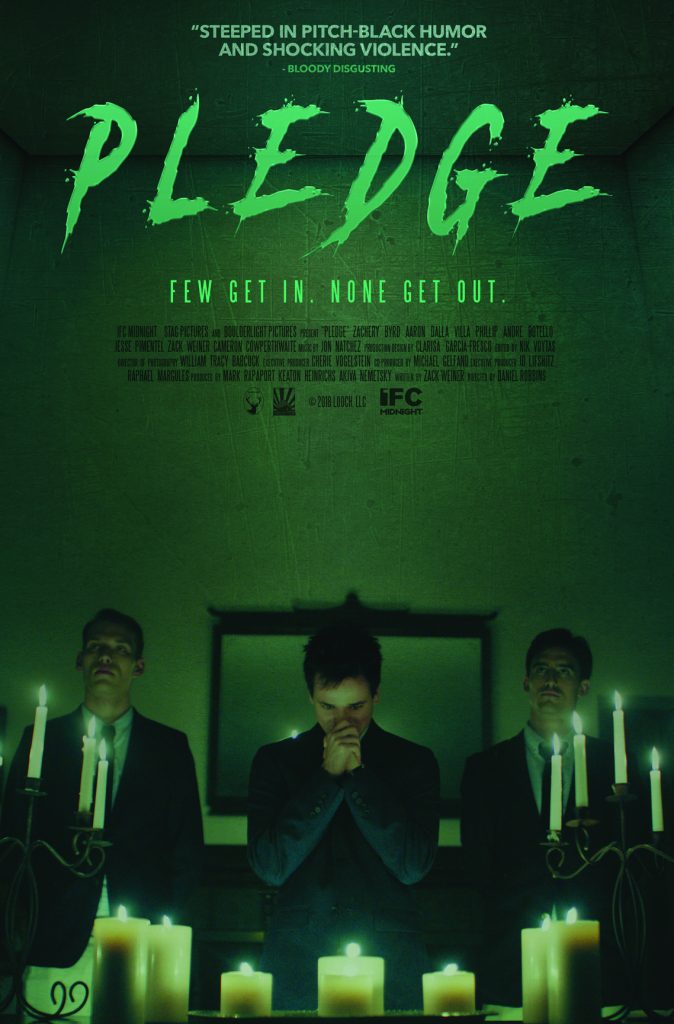 How did you find the impressive mansion location?

I found it on Airbnb. A lot of the film takes place in the mansion, and we didn’t have enough money to afford a fantastic-looking place like that for a few weeks. Luckily, we found an owner who was agreeable; I think the idea of having a film shoot at her place was really attractive to her. We ended up working out a deal where Zack Weiner traded living situations with them. They took Zack’s apartment, and we took their mansion. We filmed and slept inside the mansion for a two-week period, and it was like camp.

We were very respectful of the property, and there was only one instance where we broke something valuable. But then another production came in after us, that was completely separate from us, that apparently influenced them to never allow anyone to shoot at their place again.

Were there any difficulties filming there?

The white room where the guys are imprisoned was shot at the mansion, in a basement area that was used for storage, so not many people go in there. It had a lot of mildew and not a lot of ventilation, and the white room itself was actually never opened; it’s just part of the foundation for the building. So when we found that, we said, “This is perfect; this is exactly what we’re looking for for this room where they stay overnight.” However, there were a lot of, I guess, pathogens in the air, and Zach Byrd had an allergic reaction to them, and he was not able to breathe properly in that room, which was a huge setback. We were unsure of how to move forward, because we didn’t want to harm him and his health. So we ended up giving him a military-style gas mask, and he would wear it between shots, and when he had lines, he would take it off, do his scene and then put the mask back on right away. We made sure he was as comfortable as possible.

That whole basement area was painted black by us, and we didn’t actually have permission to do that. So after we were finished, we painted it back to what it had been, hoping we wouldn’t get caught. To this day, we have no idea if they realized it.

The final scenes in the basement, as you can probably tell after seeing the movie, were not done inside the mansion; that was a separate location. We found an apartment building in the Bronx that had this amazing tunnel layout. We needed a place where our actors could run down hallways, where you couldn’t exactly tell what the layout was. It was meant to be disorienting, and feel like this mansion was built on a foundation that was meant for something else.

The final battle sequence was done in a chamber that had no lighting at all, so on the day of that shoot, our DP William Babcock, who’s a very talented guy, had to go to Home Depot and buy LED lights, and then our art department had to drill them into the concrete ceiling. The problem was, we had conventional power tools, so trying to drill into concrete with those didn’t work out very well. We spent about six and a half hours drilling those lights into the ceiling. This was the second-to-last day of production, and we still had an entire fight sequence to shoot—and we shot that within a day. Luckily, to Will’s credit, it looks great, but at the time, it was extremely stressful.

How did the casting come together?

Casting was one of the biggest challenges we had, because we didn’t have enough money to afford SAG wages and we had to go non-union. That’s a process in and of itself. I had three weeks to prep the film, and I’m LA-based, so right when I got to New York, one of the first things I did was start the casting process. Fortunately, New York is full of hungry actors who are looking for their first feature. Aaron Dalla Villa, who plays Max, was the first one we hired, and he kind of set the tone for everyone who was cast after him. Some of the characters were actually different actors until about five days prior to production, until we had the last set of people audition for the film. One of them was Zachery Byrd, who plays Justin, along with Phillip Botello, who plays Ethan, Jesse Pimentel, who plays Brett, and Cameron Cowperthwaite, who plays Ricky. Phillip and Cameron were the only actors from Los Angeles who we flew out for the production. I think one of the best parts of the film is the cast, the family we built and the chemistry they all had. To this day, they’re good friends.

I understand that Dalla Villa stayed in character the whole time…

Yeah, Aaron is quite a character, on and off screen. He’s a Method actor, and he had an idea of who Max was before we even started shooting, and then as soon as production started, he was Max. I wasn’t allowed to call him Aaron; he wouldn’t respond to that. I still call him Max today because that’s how I know him; I never called him Aaron on set. Daniel and some of the producers had their parents visit the set, and Aaron would be in character around them—which, if you’ve seen the movie, you can imagine was quite an uncomfortable experience.

Anything else you want to say about PLEDGE?

One of the things I’m most proud of about this movie is how we pulled it off when we didn’t quite have a script that was 100 percent ready for production. Daniel Robbins was about to attend Columbia Business School at the end of August, beginning of September, so we had a deadline and we had to make sure shooting was finished before then. A lot of the performances you see are improv, and I have to hand it to our editor, Nik Voytas, who spent almost a year and a half with me and Daniel and [producers] Mark Rapaport and Akiva Nemetsky and make it what it is today. We had to find the common line between all the takes, because every one was different. We had to find that story and adhere to Zack Weiner’s vision for the film, and the fact that it is what it is today is a miracle, because it was a very unconventional process. I wish we’d had the time to really flesh out the script, but we had 18 days to shoot this movie and about two and a half weeks to prep it, and it’s now what you see on the screen. I’m really proud of it.