Actress Nadia Alexander, whose horror-drama THE DARK is currently making its way across the festival scene, also co-stars in the August genre release BOARDING SCHOOL—in which she takes on a very unusual role. She gave RUE MORGUE some exclusive words on the movie, to go with a couple of exclusive pics.

Speaking with us at last month’s Tribeca Film Festival, where THE DARK had its world premiere (see review here), Alexander gave us the scoop in her part in BOARDING SCHOOL, which hits theaters, VOD and digital HD August 31 from Momentum Pictures. “It’s about a group of misfit kids who are sent off to this school that’s run by a couple who seem kind of…you don’t know what their intentions are, exactly, and then things start to go very wrong. I play the roommate of the lead boy, Jacob [Luke Prael], who becomes his best friend—and is also a boy. His name is Phil, and he’s 14 years old and suffered full-body burns in an accident. He’s a sweet kid, but he looks kind of terrifying, so nobody really wants to be friends with him except Jacob.” 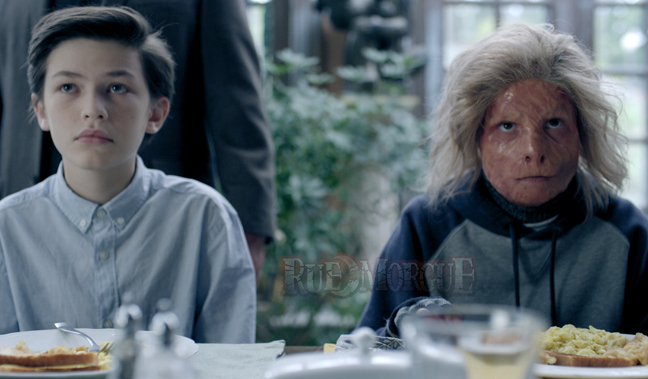 So how did Alexander wind up in this gender-switching role? “They needed somebody who was over 18,” she explains, “because it was three and a half hours just to put the burn prosthetics on, and then half an hour to take them off. For the amount of hours they required, they needed someone over 18 [due to child labor laws], but the problem is that it’s very hard to find a boy who’s over 18 and can physically play 14. So they opened it up to girls; actually, when I auditioned, they weren’t sure if they were going to make the character a boy or a girl, but then they decided they only wanted to have one girl in the house, who was already cast. So they made it a boy, and though I auditioned as a girl, I got the job.”

To prepare for this unique acting opportunity, Alexander got together with Moni Yakim, the father of BOARDING SCHOOL writer/director Boaz Yakin, who teaches at the famed Juilliard school. “We worked out Phil’s physicality and ways to give him kind of a boyish gait, and also the sense that he’s been injured and might have certain muscular damage and stuff like that. I walked with a bit of a limp, and a little pigeon-toed. I also lowered my voice about an octave to try to sound a little more boyish. It was really fun, and a great acting challenge. Actors always love doing the gender-reversal thing, but it usually only happens in theater, so I feel very lucky.”

On top of the physical side, Alexander faced the challenge of those extensive prosthetics. Although THE DARK, in which her role also required special makeup, has started screening first, she did BOARDING SCHOOL before it. “I literally flew out for THE DARK the day after I wrapped at 7 p.m. on BOARDING SCHOOL. The next morning, I was on a plane to Toronto. So this experience helped me with THE DARK, because it took so long, and was full-face. It totally changes the experience of making a movie when you spend three and a half hours getting prepared. The other kids would roll out of bed at 9 in the morning and come in, and I’d be like, ‘I’ve been here since 3!’ [Laughs] Working through the prosthetics was difficult; with THE DARK, there were still parts of my face that could be seen, but on BOARDING SCHOOL it was an entire mask. There was just no part of me there, and it never came off, so it was all about understanding how to move my face in the right ways.”

She spent so much time in the makeup, in fact, that some of her co-stars spent the shoot unaware of her real face. “It was really funny,” she recalls. “Will Patton [who plays one of the heads of the school] didn’t know what I looked like under the prosthetics, and he was still working when I was getting deprocessed. I got out and looked like a girl again, and I walked on set and said, ‘Hey!’ and he was shocked; he was like, ‘Oh my God! You’re so pretty!’ That was the best thing; I got so many compliments on how pretty I am, just because I looked so bad beforehand!”