A violent period of American history is the backdrop of director Ted Geoghegan’s gripping and brutal thriller MOHAWK, opening this week. RUE MORGUE got an exclusive chat with Geoghegan and producer Travis Stevens about the film, plus a couple of exclusive pics.

MOHAWK comes to select theaters and iTunes this Friday, March 2; for a list of cities and playdates, click here. The movie reunites Geoghegan (who scripted with PAPERBACKS FROM HELL author Grady Hendrix, and previously talked about it here) and Stevens from the highly regarded ghost story WE ARE STILL HERE, along with cinematographer Karim Hussain, composer Wojciech Golczewski and makeup effects creator Marcus Koch. Kaniehtiio Horn, whom Hussain directed in the “Vision Stains” segment of THE THEATRE BIZARRE, stars as Oak, a Mohawk warrior forced into a battle for survival along with fellow Mohawk Calvin (Justin Rain) and their British companion Joshua (Eamon Farren) against a group of vengeful American soldiers led by Colonel Holt (THE HILLS HAVE EYES’ Ezra Buzzington). Noah Segan (THE MIND’S EYE), Ian Colletti (PREACHER), Robert Longstreet and Jon Huber (a.k.a. Luke Harper of the WWE) also star; see our review of the movie here.

How did MOHAWK come to be your follow-up film to WE ARE STILL HERE?

TED GEOGHEGAN: The idea behind this film was to do something that was a total 180, but still appealed to the fans of the earlier one. I wanted to do something that was period horror, which WE ARE STILL HERE was, but at the same time kind of subvert expectations. I liked the idea of something that’s basically a home-invasion movie, but the home is North America. After moving to New York 12 years ago, I learned a bit about the Mohawk people, and I learned what a Mohawk was besides a haircut and thought it was an amazing setup for a story. I realized that these native people were so bad-ass 200 years ago that we still wear their hairstyle to this day to present ourselves as antiestablishment ass-kickers. 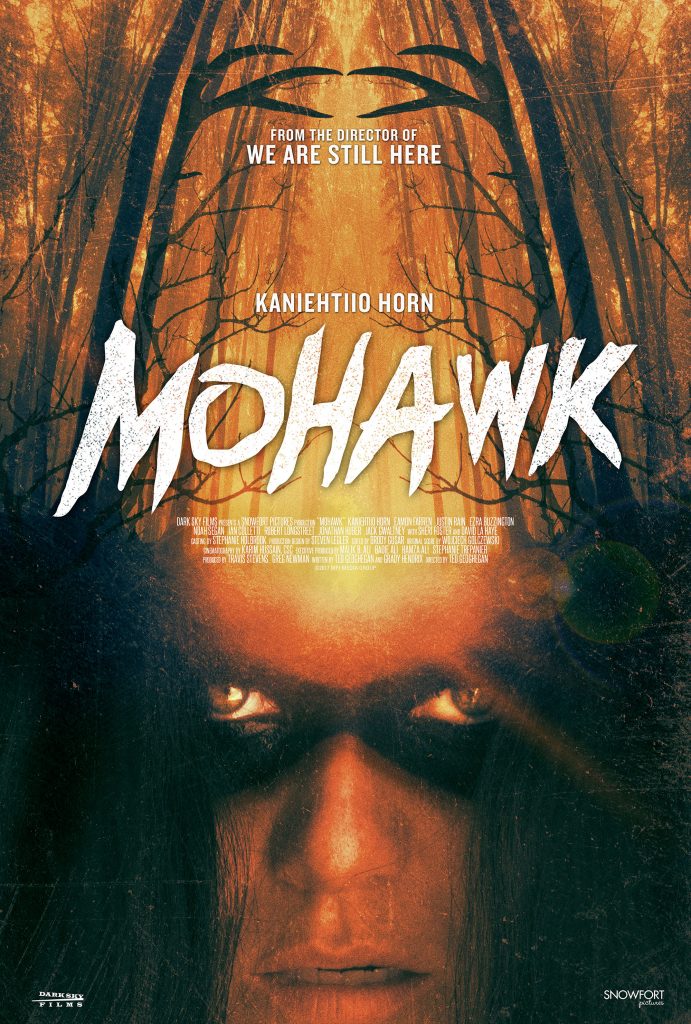 There’s dialogue in the movie about what it means to be a true American, which is obviously very relevant in the current political climate. Did you intend MOHAWK to be an allegory for our current times?

TG: It’s a period story we wanted to tell that fortunately/unfortunately came together at a time when I feel like this story really needs to be told.

TRAVIS STEVENS: When it came time to figure out what we were going to do next, Ted had four or five ideas, all of them worthwhile. But this was the one where it was like, “Oh, there’s a lot to be said with this movie.” There’s the surface level, where it’s an action-survival tale with a female lead, and that’s cool; the main characters happen to be from a different culture than we normally see represented in movies. The goal, from the initial concept, was find a way to make a story set 300 years in the past relevant to today. Not just to what’s going on in America, but to how America operates in the rest of the world.

The last thing we wanted to do was make a “white savior” film, where it’s like, “These poor, poor native people are oppressed by the evil white man.” There’s a version of that movie, and we see it every Oscar season, and it’s like, “Fuck you. The world is a little more complex than that.” If we were going to do a movie that on the surface is an exciting, run-and-gun thriller, we wanted to add some complexity to both sides of that—the good guys and the bad guys—and make sure we gave enough screen time to both points of view. We hope the audience understands that it’s not just, “This is pure evil and this is pure good,” but there are two different factions with two different points of view, and both of them think they’re right.

So when you say that the dialogue seems relevant now, that’s not a coincidence. I’m sure you have friends who have a different political point of view, and you like them and know they’re good people, but you don’t understand how they can have that political stance. That’s the world we live in: Good people can have points of view you don’t agree with, and what’s interesting is trying to figure out what led them to that point of view.

TG: Yancy, the character played by Noah Segan, is kind of an outsider, in the sense that he has been brought into our “villainous” group, but has enough of an ethical agenda that he doesn’t necessarily believe in everything that’s going on. It’s a similar thing with Jon Huber’s character Lochlan. These are people who don’t live in black and white, they live in shades of grey. Yancy is the type of person we all know—someone who has been forced into a situation they’re not comfortable in, but is so nervous that they’re not willing to speak up against what’s happening in said situation.

TS: You could 100 percent transport this story to Afghanistan or Iraq and contemporize it, and it would play the same way. It’s a group of American soldiers who are there for the right reason, doing what they are told is the right thing, in a very tough situation, and acting overly aggressively given the dynamics of that situation. And you have a local population who are 100 percent fighting back and being brutal in their means because they lack the resources to fight on the level of their attackers.

You’ve got a really strong, cohesive ensemble in MOHAWK. How did the cast come together?

TS: It was like throwing a dinner party: You have to make sure the group of people you invite to sit around that table are going to have good conversation, and not be too wrapped up in their own stuff. Once we got Tiio, we though, “Who can we put across from her; who’s going to be a good Calvin? If it’s going to be this actor as the lead villain, who’s going to play his son?” It came together pretty organically, but it was exhausting. And it was important to work with actors who had done films that were a little looser, that had some naturalism to them. This is a period piece, but Ted didn’t want to go with affected English; he wanted the dialogue to feel contemporary and natural, and not with accents, and we had to put together a cast that vibed in the same way. 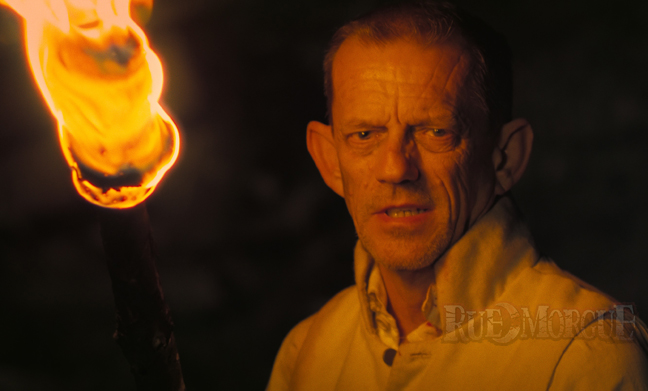 Horn, who is Mohawk herself, does some of her dialogue in her native language. Was that something you researched and scripted, or did you count on her to bring her language to it?

TG: There were lines in the script that were noted as being spoken in Kanien’kéha, the Mohawk language, but I personally did not know how to speak it. As soon as we cast Tiio, we found out that she has a working knowledge of the language, and her family has an extensive knowledge of it, and we were able to land all that and more. There were several lines that we found were more powerful being spoken in Mohawk, and we completely embraced that.

Guy William Gane III, who played the lead ghost in WE ARE STILL HERE, is one of the soldiers in MOHAWK, and has a background in historical reenactments. Considering that experience, was it a given that you would cast him in this movie?

TG: We knew we wanted Guy involved in MOHAWK after we discovered his intense knowledge of the mid-1800s while working on WE ARE STILL HERE. We reached out to him when this film came to be and asked if he wanted to be a part of it. And not only did he want to come aboard, he introduced us to a lot of people—our armorer, our costumer and others who came onto this project because they have such vast knowledge of the 1800s—everything from the Revolutionary War to the Civil War. We employed a wide variety of experts on the era on the film, in all capacities.

MOHAWK feels like the kind of film that could only get made as an independent. It’s unlikely a studio would tackle a movie with this approach to the material.

TS: Fuck the studios, man; what have they done in the last 10 years that’s had any relevance? Once they turned into this machine, cranking out branded entertainment, where they’re trying to tick all quadrants and tell the most basic stories…of course they’re not going to take a chance. And when they do, they take a bath on it, because that’s not what mainstream audiences want to see, because they’ve been trained to go into a movie knowing everything that’s going to happen before they watch it. For better or worse, we’re at a time where if you’re working in the independent space, you can tell any type of story, simply because nobody else is.

TG: We absolutely have the opportunity here to explore themes that the studios would shy away from. I’m very proud to have made a film that embraces the plight of a native people, in a time period that has not yet been fully explored in cinema.