A nocebo is the opposite of a placebo–a treatment that is harmless but causes negative symptoms because the patient believes it to be dangerous–and that’s what seems to befall Christine (Eva Green) in the new film of that title. RUE MORGUE spoke with director Lorcan Finnegan about his combination of real-world concerns and folk unease.

Arriving in theaters tomorrow and debuting on VOD November 22 from RLJE Films and Shudder, NOCEBO is the latest collaboration between Finnegan and scriptwriter Garret Shanley, who previously made the accomplished chillers WITHOUT NAME and VIVARIUM. In the film, Christine is a designer of children’s clothing in Dublin who begins suffering a strange illness that causes seizures, hallucinations and more. A Filipino housekeeper named Diana (Chai Fonacier) turns up to begin working at her home, even though Christine has no memory of hiring her, and begins treating Christine’s illness with folk magic. Christine’s husband Felix (Mark Strong) becomes suspicious of Diana, and begins to uncover her true purpose. Even as it contains harrowing fantasy and dream sequences, with squirm-inducing prosthetic effects by HATCHING’s Conor O’Sullivan, NOCEBO is effectively rooted in real-world concerns, and as Finnegan discusses here, that was a key part of his and his collaborators’ approach to the movie.

Did this movie and its themes grow out of the previous films you’ve done?

You’d probably be the right person to answer that question [laughs]. Actually, weirdly, it probably is kind of the child of WITHOUT NAME and VIVARIUM. WITHOUT NAME is about the supernatural and nature, and VIVARIUM is about consumer capitalism, and NOCEBO is sort of a clash between those things. 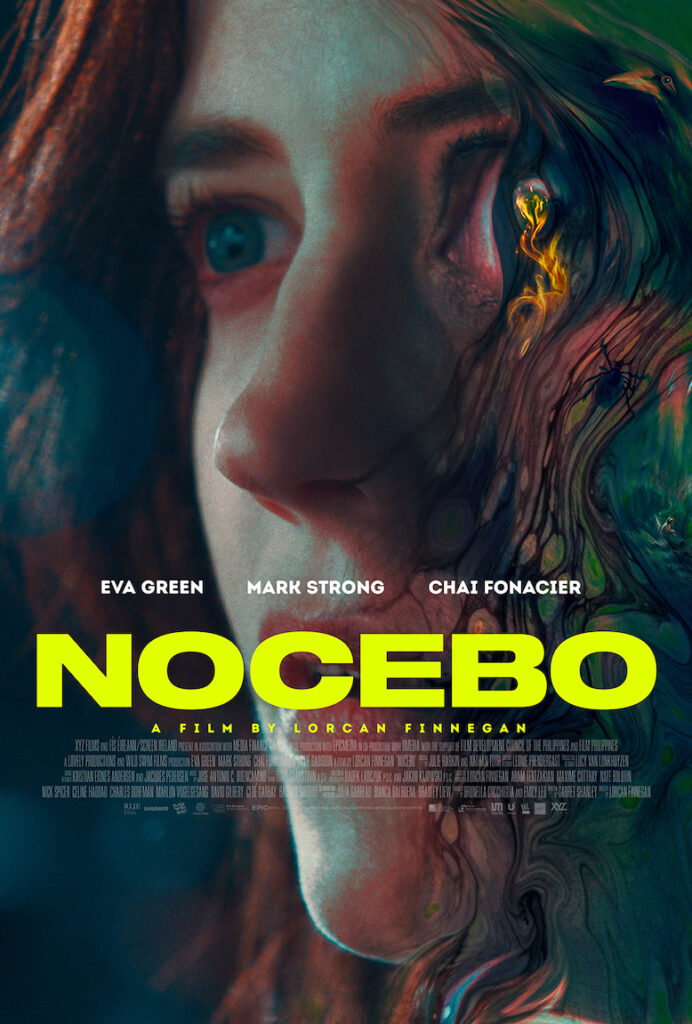 This is your first film in which the characters encounter the horror in their own, previously safe environment, as opposed to being out of their comfort zones and in unfamiliar settings, as in your previous two. Was that a conscious change in emphasis?

Well, it is a domestic setting that we try to have become an unsettling environment, but that wasn’t really a conscious choice; it was quite an organic process. Garret and I were interested in placebos and nocebos and started researching further into them, and that led us to the Philippines, where shamanism and folk healing are still tradition. Because Ireland had a tradition of folk healing pre-Christianity, which kind of got eradicated, and so did the Philippines, but they still held onto it in some areas. So it really grew out of that research process; it was just something that interested us.

How much of the folk magic seen in the movie is authentic, and how much did you create to serve the story?

It’s all authentic. We were very careful with all that. Garret and I went to the Philippines for a research trip in 2019, after we started drawing those connections between Ireland and the Philippines, and how our heritage of these folk-healing women–they’re called wise women in Ireland–were sort of eradicated by Christianity. And then in the Philippines, the arrival of the Spanish pretty much led to the eradication of the Babaylan, who were kind of their high priestesses, healing women. Both countries were colonized more or less around the same time, within about a 20-year period. There’s also this connection between colonialism and the rise of a kind of consumer culture and exploitation. So we went to the Philippines to dig into the folk healing, into kulam, which is their black magic, and witch doctors. We went to the Cebu and Siquijor islands, and met tribal chiefs and faith healers and talked a lot about folklore. And it was weird; there are a lot of interesting crossovers between Irish and Filipino folklore, very specific stuff, like if you want to escape a fairie trap, you take your coat off and turn it inside out, things like that.

Once we knew there was something there that we wanted to explore more, I pitched the project with Brunella [Cocchiglia], the producer, in Macao at a co-production market, to find Filipino co-producers. Epic Media came on board and brought on a consultant writer from Cebu called Ara Chawdhury, who helped us with the scenes set there. Me and Chai Fonacier, the actress, actually had a shaman come in to make sure that everything in the script was basically accurate, and based on real kulam and folk-healing techniques. Even all the props were shipped over from the Philippines, and they had to be covered before and after every use. And Chai had to have a specific route to get to set, because she wasn’t allowed to go by any graveyards; he warned us about that. So it was all as accurate as we could get, really.

Obviously, there will be issues of cultural sensitivity to be dealt with when you’re telling a story like this, so how did you and Shanley approach that?

We made sure it was a cultural collaboration, a true Irish-Filipino co-production. Two of the producers are from the Philippines, from Cebu, and Ara, the writer who helped us with all the Filipino scenes, is from Cebu also. And Chai had input into the story and the language and the dialogue and everything. We knew that we wanted everything to be as authentic as possible, and that it felt like we were working together on the project. Chai came to Dublin to shoot for five and a half weeks, and then we went over to Manila for–well, we only shot for like seven days, but we had to go for nearly two months, because we had to do our quarantine there, and then do all the location scouting before filming. So that’s how we approached it, and like I said to Ara–I was actually trying to get her to do a movie in Ireland–it was great that we could learn about each other’s cultures in the process.

How did you cast Eva Green for the lead role, and how was it working with her?

I just thought she’d be great to play Christine. It was pandemic times, and I knew Eva had shot in Ireland before for PENNY DREADFUL and had a good time there. And I thought she could embody the character very well. She’s also quite politically active, so I hoped the material would be of interest to her. So we offered it to her, and she loved it and came on board, and she was great to work with. She’s such a pro, and we were on a very tight schedule; we were doing, like, maybe three takes max, sometimes one, and she was wonderful.

You were talking about addressing issues of consumerism, so was it an obvious choice to have Christine working in the fashion industry?

Yeah, and what happens in the film was based on a factory fire in Manila. While we were doing our research into this, very early on, we learned about a fire in the Kentex factory in a suburb of Manila in 2015 that killed 74 people, and that was basically a result of people bypassing safety regulations in order to do things cheaper. So it was inspired by that and the rise of fast fashion, and the kind of neo-colonial exploitation that happens now, where a company can be in the U.S. but still have all its manufacturing taking place in the Philippines or Vietnam or something, and they can wash their hands and absolve themselves of any guilt if something bad happens because it’s not on their soil. What would normally be illegal, even, in America might be legal in another country, or blind eyes would be turned to it. So the whole fashion industry was definitely an element we wanted to explore. The song at the end of the film, “Pugon,” is by a Filipino band called The General Strike, and that song is actually about the Kentex factory fire; “pugon” means furnace.