Nearly three decades after the release of the first TREMORS, Michael Gross’ Burt Gummer is still battling the human-eating Graboids and the assorted variations on the species. The franchise takes the fight to a new locale in TREMORS: A COLD DAY IN HELL, which Gross discusses with RUE MORGUE in this exclusive chat.

With the Kevin Bacon-led TREMORS TV series no longer happening, Gross is continuing to carry the franchise flag. Debuting today on Blu-ray, DVD, VOD and digital from Universal Pictures Home Entertainment, COLD DAY IN HELL reunites him with director Don Michael Paul, screenwriter John Whelpley and co-star Jamie Kennedy from the previous TREMORS 5: BLOODLINES. This time, Burt and his son Travis (Kennedy) travel to the Canadian Arctic, where a remote research station has come under attack by Graboids, Ass-Blasters et al. In the midst of combatting the creatures, he discovers a secret about them that leads him into conflict with some of the team on site, while dealing with his own microbial infection that he picked up in the last movie. Needless to say, Burt doesn’t handle all of this well…

When COLD DAY IN HELL begins, Burt is an angrier guy than we’ve seen him before.

Part of a way of explaining that is something that he has not revealed to Travis. He has already begun the process of this illness, this brain disease he has that has upped everything a notch for him. He doesn’t know why he’s feeling the way he does, which is part of his irritability factor; it’s ramped up. This was a difficult piece, and that irritation and anger is Burt not knowing what the hell’s going on with his own body. It’s something he can’t control—and for a control freak like him, who likes to micromanage everything, it’s pretty disconcerting. 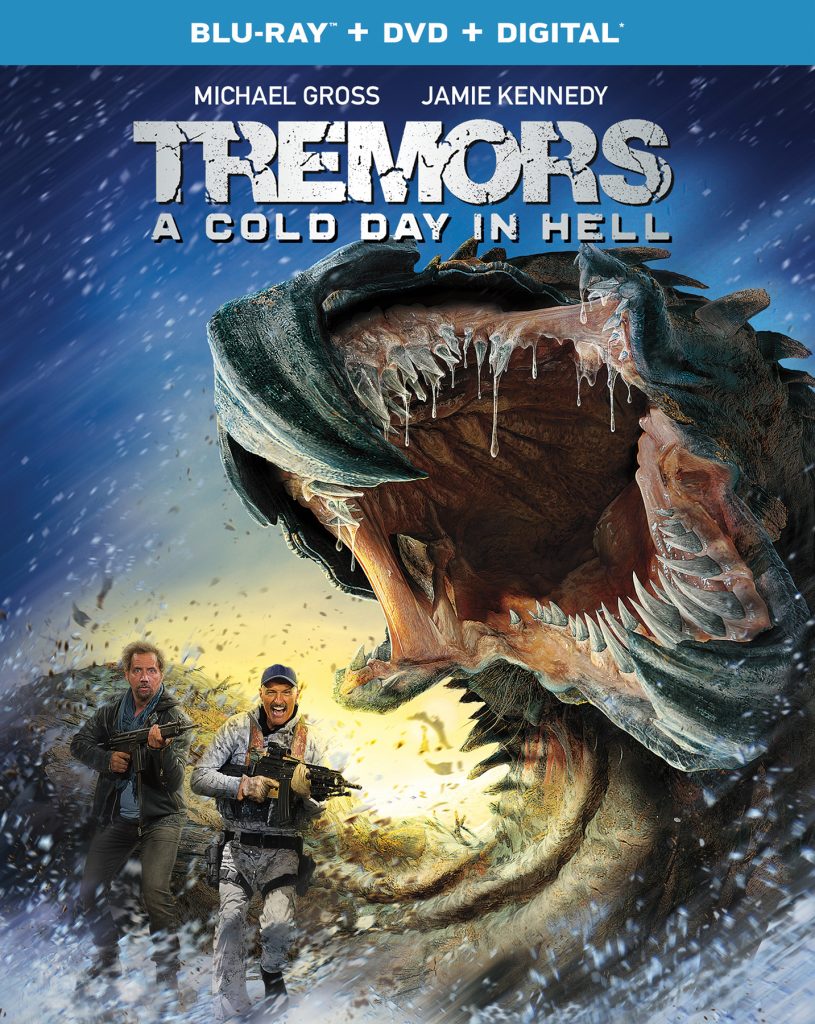 Did reteaming with Kennedy and the TREMORS 5 filmmakers on the same location (South Africa) create a kind of comfort zone for making COLD DAY IN HELL?

Absolutely. Not only is there some top talent down there, but working with Don Michael Paul and Jamie was a pleasure the first time, and I enjoyed it so much, so there was a familiarity; we speak each other’s language. I understand how they work, what is expected of me in their minds, so that made it all easier.

Since Paul started out as an actor, does that make him a better actors’ director?

He does know how to talk to actors in that respect, yes. And he’s a very literate guy; we wound up discussing various other things, including plays he’s been in. In fact, I think his first play was the same as mine: Rodgers and Hammerstein’s OKLAHOMA!, way, way back in time, and he played the same character!

Why go to South Africa to shoot a movie set in the Canadian Arctic?

Well, this was intended to be filmed in a very cold and snowy climate, and it was one of those crazy changes that happens at the last minute in moviemaking. It was actually going to be shot in the mountains of Bulgaria, where there was plenty of snow, but they had one of their largest blizzards in modern history, and we actually got snowed out of our own location! It would have been logistically impossible to get in and out of there with the trucks we had; it would have been an absolute nightmare and proven to be very costly, so we wound up in South Africa again. As you’ll see in some of the extras included on the DVD and Blu-ray, what you see as snow is actually sand dunes in the first scenes. But that said, those locations in South Africa worked well for our piece, which is why the Arctic doesn’t look like it should—it’s climate change! Burt arrives overdressed and finds himself in rather temperate weather, which is part of the problem; another is the Graboids being released from the permafrost after all these millennia.

As the TREMORS films have continued, has there been a learning curve involved in the transition from physical creature effects to CGI?

Yes, there has. There were so many mockups in the first movie, and the CGI didn’t really begin until the second one. So it has been a bit of a learning curve, though you know, we’re always pretending, whether it’s a physical model or something invisible in front of us. It’s just part of the skill set—pretending at a higher level than you did as a kid. It’s always fun to have a puppet or a practical creature in front of me, which we did have at certain points in COLD DAY IN HELL. It helps to have it where it is supposed to be so I can react, to have something within inches of me and not quite have to imagine it. You’re always second-guessing a little bit when it’s CGI, because you don’t know what they’re going to place in there. So you hope that your amount of horror and fear is proportional to what will be introduced into the film after you’ve done your work, and you can’t go back to correct it. There’s always that little bit of guesswork with the CGI.

Since you’ve been with this franchise for so long, do you have more input into the scripts at this point?

I regret to say I do not—well, I don’t know whether it’s good or bad, but I don’t always have final say in the screenplays. I have a lot to do with the character of Burt himself, and the journey he takes. There are so many things beyond my control, in the overall screenplay and the production, and I’m not actually that interested in being a producer per se, because I don’t want to hear everybody’s problems [laughs]. But I do have quite a bit of say in Burt’s dialogue, the way he expresses himself, the journey he takes in the piece. I win some and I lose some, in terms of storyline and things like that.

As you might expect, some of those things are determined by budget. “Oh, we can’t shoot at that location, we don’t have enough money for it,” or “We can’t afford that person,” blah blah blah. It goes on and on and on, and sometimes it’s frustrating and sometimes it works out quite well for us. In fact, I’ve been in several meetings with the producers, just discussing plot and storyline for TREMORS 7. Nobody has pulled the trigger on that yet, but it’s possible that it will happen. That remains to be seen; that will largely be decided by the bean counters. But I do love the character and the franchise, so I’m glad to be included in those discussions.

Where would you like to see Burt go in the seventh film?

I have some ideas for him, and the idea is to constantly take him to places he hasn’t been before, and that means challenging him personally as well as professionally. Professionally, he’s at the top of his game; he knows how to hunt monsters. Personally, one thing we did in TREMORS 5 was take him to a place of discomfort, if you will, which was finding out that he has a blood relative. For a man who is as misanthropic as Burt Gummer, to have to deal with another human being, let alone one who wants to get close to him and spend time with him, was a great hurdle. And in COLD DAY IN HELL, we ask, what is it like for a man who’s a complete control freak, who micromanages things, to have to cede control to someone else? We like to keep taking him out of his comfort zone—not just as far as the monsters, but personally.

The original TREMORS is closing in on its 30th anniversary; what do you think has made the series so enduring, and has attracted so many fans over the years?

I believe a lot of it has to do with the fact that, first of all, it’s genre-bending. It’s part Western, it’s part horror, it’s part comedy, it’s part action-adventure. There are so many things going on, and it’s fun that the movies are not confined to one genre. And in an elemental way, it almost always takes place where people are isolated, out on their own and amongst, let’s say, rugged individualists. I think Americans still like to think of themselves—as much as they may wear three-piece suits, mortgaged up to the neck, with houses and car payments and responsibilities—as rugged individualists [laughs], fighting the world on their own. There’s something iconic about the settling of the American West, and the way Americans like to think of themselves in general. Burt is the first among those iconic, isolated individualists, and that’s all part of the fun.