More than one kind of past injustice echoes down to the present day in MASTER, the dramatic new horror feature that marks writer/director Mariama Diallo’s feature debut. The filmmaker spoke with RUE MORGUE about the film that played Sundance and SXSW this year and hits theaters and Amazon Prime tomorrow.

MASTER takes place at fictional, storied Ancaster College, where Professor Gail Bishop (Regina Hall) has been named Master–a prestigious title, yet one with uncomfortable associations to the days of slavery–of the Belleville residence hall. She’s the first Black woman to have that position, and incoming freshman Jasmine (Zoe Renee), who moves into Belleville, is one of the few students of color at the largely white university. While Gail and Jasmine, along with Professor Liv Beckman (Amber Gray), who’s up for tenure review, deal with Ancaster’s institutionalized racism, Jasmine also appears to be haunted by the spirit of Margaret Millett, a woman hanged for witchcraft back in the days of the Salem trials. MASTER combines relevant sociopolitical themes and the supernatural into a moving and chilling study of three women at odds with unpleasant historical reverberations–and occasionally with each other.

Was MASTER inspired by any of your own college experiences?

Yes, it was definitely lifted from some parts of my life and observations. Thankfully, my experiences aren’t directly mirrored by Jasmine’s, who we see go through some incredibly difficult stuff, but the world of the film is completely pulled from my life and my college experience. The tenor of the microaggressions that are lobbed at Jasmine and Gail are very close to things I’ve seen and that have happened to me, or have happened to people close to me.

Where did you go to college?

I went to Yale, where they had Masters; while I was a student, the title still existed. A few years after I graduated, it was changed, and I think the title is now Head of College. But as you can imagine, there are some parallels between Ancaster and that other institution! 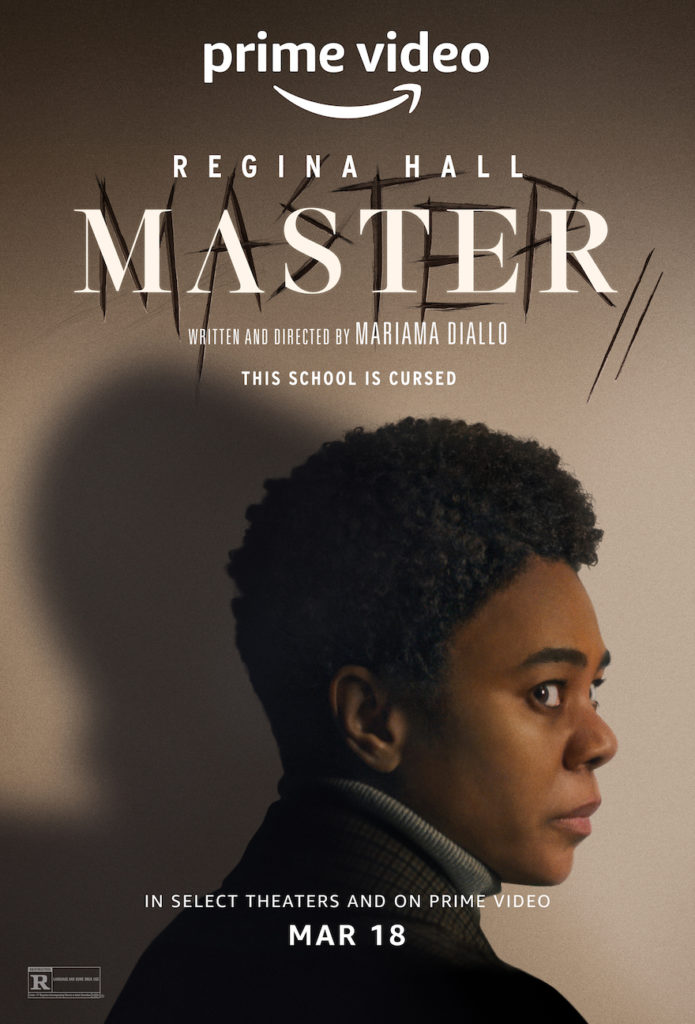 I was intrigued by the name “Ancaster”; it sounds incomplete, like a part is missing. What inspired that choice of name?

I wanted it to feel reminiscent of these institutions where you have to presume it was the last name of someone at some point, but it’s not like any last name you regularly hear, and you kind of wonder, where does the name “Dartmouth” come from, you know [laughs]? Was there a Mr. Dartmouth? I wanted it to feel like this English name that dates back to the early years of our country. But I’ve also been asked if it was intentional that it’s just a couple of letters off from “ancestor,” which was not my conscious intention. It’s just that when I did research and looked through last names, it came to me and felt right. And I think that what it brings to you, that it feels incomplete or slightly off, unfamiliar or a little bit forbidding, that also appealed to me.

Can you talk about the journey of making the film?

I started my first draft of MASTER in 2016, so it’s been quite a while. Things really came to life after my short film HAIR WOLF played at Sundance, and after that I met my now-producers at Animal Kingdom. We really hit it off immediately, creatively, and I kept working on the script with them, and then we took it to Amazon, and then we took it to Regina. I was amazed at every juncture that it continued to grow. We started shooting before the COVID lockdowns, and then we picked right back up with about another half of the film to go nearly a year later, in winter 2021. It’s been quite a process, to say the least!

Was it difficult to pick up the momentum after a year away, and did that time give you a chance to look at what you’d already shot and rethink anything about the movie?

In the year we had down, I believe what I benefitted the most from was having time to think about myself as a director, to grow in confidence in what I wanted to do and how I wanted to do it. Everything goes so quickly when you’re on a set, and particularly as a first-time director, everything gets thrown at you. So to have almost a year’s pause to grow as a person, honestly, I felt like when I came back on set, I was not the same director that I was when I started the film. I was more assured, I’d had more time to sit with the ideas. I was so eager to get back in that it wasn’t hard to pick back up, but I was definitely intimidated by the prospect of shooting during the pandemic conditions. On top of my own concerns about making our days and getting all the shots we wanted, there was also the question of whether anybody was going to get sick. But we were very fortunate to have an amazing COVID compliance team, and we had no breakthrough infections.

MASTER is very ambitious in its narrative, juggling the three women’s stories as well as the backstory of the witch. How did you approach that in developing the script?

That was definitely something I had to keep an eye on, and that my producers at Animal Kingdom were also monitoring, because I want to talk about everything. There were some versions of the script with much, much more going on. But what was most important was to tell those characters’ stories, and to tell them in a way that gave the audience enough information and access to their inner lives. So throughout the scripting phase, that was something we had to check back on: When was the last time we saw Jasmine? When was the last time we saw Liv? What’s going on with them? It continued in the edit process as well, just making sure that was all balanced so it didn’t feel like we were missing anything.

The movie doesn’t come to the usual resolution we expect in a genre film about witchcraft; did you intentionally want to go against those traditions?

I think so, and it was an interesting process, because I love horror films, and that feeling of satisfaction when all the points of the conspiracy come together, and you understand who the bad actor was all along. But the heart of MASTER, even more so than the witch and that legend, and the mystery we’re trying to uncover is, what’s going on at this school? What is up with this institution, and what is this place doing to people? So what felt most important at the end was to resolve that. The conspiracy doesn’t necessarily lie in the supernatural; there’s a certain way of looking at the film, and looking at the clues and adding them up, that points at Ancaster itself as the antagonist.

You create some great atmosphere on the campus, including the use of red lighting that recalls SUSPIRIA, a very different film about witchcraft in a school setting. Was SUSPIRIA an influence?

I love SUSPIRIA, and you can feel it in MASTER; it’s a film that I admire so much. I think it was maybe an indirect influence; it was less conscious. There were more direct references that Charlotte Hornsby, the DP, and I were thinking of when we were making MASTER; we watched a lot of classic horror films. We saw THE SHINING together, and ROSEMARY’S BABY was another one. Our opening shot that starts very high above the buildings and slowly moves in on Gail is a direct reference to the opening of ROSEMARY’S BABY, where you’re zooming in slowly on the Dakota. DON’T LOOK NOW was another film we watched and really thought about. Those were our three biggest, but there were many others that were on our minds as we made MASTER, and it’s always interesting to see how these influences work their way in, even when it’s less directly intentional. I would love for my film to be even mentioned in the same breath as the original SUSPIRIA!

Given how MASTER dissects and critiques campus life, was it difficult to find a college that would allow you to shoot there?

Thankfully, we were able to shoot at Vassar, and I was so grateful when we found that location. As soon as we stepped on campus, I knew that was it. We were somewhat limited geographically, because we were a New York City-based crew and couldn’t go too far afield, and it was hard to find a school that looked like it could be in Massachusetts, and was somewhat isolated. So to find Vassar in Poughkeepsie was amazing. They were so great to work with, and they understood our themes and what we were going for, and they were supportive of it.

MASTER is very resonant; after I watched it, I turned on the TV and the first thing I saw was a news report on the Ryan Coogler incident, which recalls the scene with Jasmine in the library.

Yeah, absolutely. Isn’t it just so tragic how so much of the film, even after it was made, feels ripped from the headlines, but headlines that didn’t exist at the time of writing? That Ryan Coogler story was something I followed as well, and it’s sadly unsurprising. As I was writing the film, and I started it so long ago, I had that moment of wondering, oh gosh, I hope this won’t feel dated when I finally get to make it and it comes out. And the sad truth is, no, that fountain just keeps getting replenished by what’s going on in our country.

Do you see MASTER as a possible corrective that could inspire change, or did you simply want to comment on the state of things and have it speak for itself that way?

I think maybe both are true. I’m hopeful that it can inspire change; film is so powerful as a vessel for empathy, and as a format that allows you to enter a character’s perspective and live through their eyes for a certain period of time. I would love for some viewers to go in and have their minds opened or their perspectives shifted or changed, But my motivation when I wrote this story was really to discuss what it feels like in those spaces, to discuss these characters’ journeys and totally unpack my own journey and my own experience. But the most incredible outcome for me would be if it could also effect change.

Do you think the horror genre is an especially effective one to address these kinds of issues?

Yeah, I think it’s so powerful, and it’s such a visceral experience to watch a horror film, anytime you’re able to move a little bit out of the intellectual space and into this realm of sensations and feelings and a space that’s not always logical, it allows you to kind of relax your mind and be open to things that maybe you would ordinarily be closed off to. So I do believe that in so many ways, horror is very effective that way.